We like women better when they fall: “Me Before You” stumbles into the same old “relatable” trap 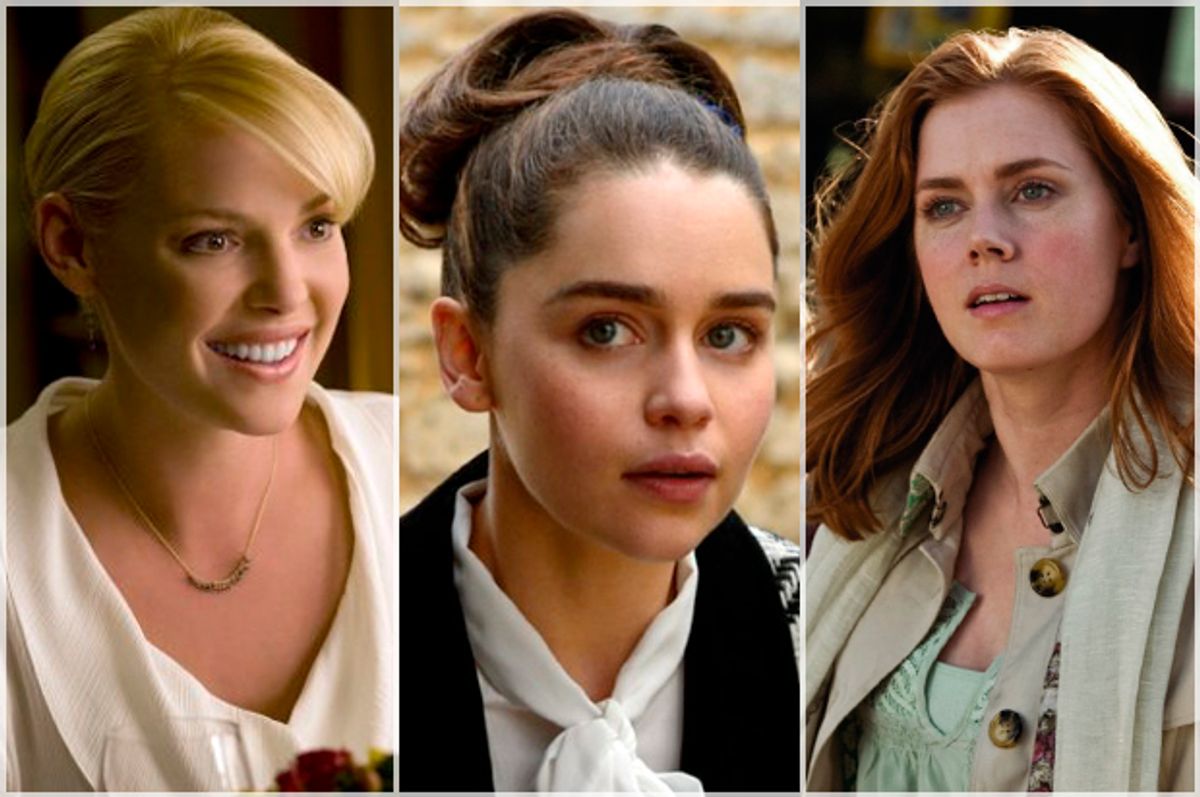 Katherine Heigl in "The Ugly Truth," Emilia Clarke in "Me Before You," Amy Adams in "Leap Year"
--

This story contains massive spoilers for the movie "Me Before You."

A more accurate title for Thea Sharrock’s “Me Before You,” the new right-to-die romance starring Emilia Clarke (“Game of Thrones”) and Sam Claflin (“The Hunger Games”), might be “Love in a Time of Euthanasia.”

Clarke plays Louisa “Lou” Clark (no relation), who has recently been let go from her job as a tea server at a quaint café in the sort of cobblestone-laden British village that would appear to have no shortage of quaint cafés. To support her struggling family, Lou takes a job as the caregiver to Will Traynor (Claflin), a former daredevil who was hit by a motorcycle a few years back. He’s now a quadriplegic who (spoiler alert!) has decided to end his life. Like Julia Roberts and Campbell Scott before them, romance blooms even as tragedy looms on the horizon.

And in the grand tradition of romantic heroines, Lou can’t walk into a room without knocking over everything in her path. During her interview for the caregiver position, Louisa does seemingly everything in her power not to get hired: Based on her mother’s suggestion, she wears a ridiculous houndstooth blazer that looks like something out Melanie Griffith’s closet in “Working Girl.” Shortly after sitting down to speak with Will’s mother (Janet McTeer) about the job, Louisa tears her skirt—and has to cover it with her coat.

The fact that Emilia Clarke manages to charm is a testament to her immense gifts as an actress, but she shouldn’t be forced to stumble for our affections. Louisa is just the latest example of the most well-worn of romantic tropes: making your female lead clumsy, socially graceless, or generally inept in order to make her more “relatable.” According to Hollywood, it’s a whole lot easier to root for someone as beautiful as Clarke, Sandra Bullock, or Katherine Heigl when they’re playing a total disaster.

What does it mean to be relatable, anyway? The word has shifted considerably in its common usage over the past few decades. In its classical definition—brought to you by the folks at Oxford—the word simply means “able to be related to something else.” Thus, if you’re taking pre-calculus in high school, you might find many of the concepts and formulas relatable to your studies in physics, a science heavily based in math. In recent years, however, the word has come to mean “a character or a situation in which an ordinary person might see himself reflected,” as the New Yorker’s Rebecca Mead writes.

According to Mead, this lexicographical shift resulted from daytime television, a media genre that attempts to make its programming resonate with the majority female audience watching at home. Many of these viewers are stay-at-home moms who desire to see their lives and struggles reflected by the discussion-oriented programming they consume. “When Rosie O’Donnell launched her TV talk show in 1996, she said that she hoped to preserve time with her family,” Mead says. “‘It’s the stories about living your life that makes you relatable to your audience.’”

Although an Ira Glass tweet about the unrelatability of Shakespeare set off what might called #Relatablegate a few years ago, it’s almost always women who are held to this standard of reflection. Whereas female politicians like Hillary Clinton and CEOs like Marissa Mayer have to worry about being “relatable” in order to appeal to voters and shareholders, their male peers can focus on getting the job done. In a memorable “Saturday Night Live” parody, Hillary Clinton (as played by the show’s reigning MVP Kate McKinnon) introduced herself as follows: “Tonight, I am speaking to you not as secretary of state, or as a senator or as a first lady, but as a relatable woman on a couch.”

The scourge of relatability is pervasive. Like the shape-shifting STD ghost in “It Follows,” you can’t run from it. This is true whether you’re campaigning for the highest office in the land or a protagonist trying to find love, set to the bubbly tunes of Colbie Caillat. For Hillary Clinton, being “relatable” means posting selfies on Twitter. For someone like Emilia Clarke, it means constantly being taken down a peg in order to prove that she’s “like us.” Thus, her character in “Me Before You” can’t be too smart or good at her job, lest she violate a kind of unwritten social contract. These apparently do not apply to third acts, in which a woman (through a big reveal) is allowed to be shown as beautiful—or at least in possession of a waistline.

When it comes to Louisa, “Me Before You” appears to be stricken with an incurable case of impostor syndrome, too. The Traynors don’t give Lou the position because she’s qualified or competent (she’s elsewhere described as having “no marketable skills”). The reason she’s hired is to be inspiration bait for their son: They think that if he develops a crush on Louisa (his father refers to her as the “pretty waitress”), it will give him a reason to live. She meets their lack of job expectations by being a terrible caregiver, spilling hot drinks on his lap and having little clue what to do in case of emergency.

Lou can’t even dress herself appropriately. One of the quirks of Jojo Moyes’ novel (on which the movie is based) is that her protagonist’s wardrobe is described as the place where Miley Cyrus and Björk (circa “Big Time Sensuality”) meet the “Golden Girls.” The film’s costume designers translate that aesthetic as Rita from “Arrested Development” redux, pairing goofy floral sweaters with big, sundress-style skirts and fluffy coats. Her ensemble is less Manic Pixie Dream Girl than flat-out Martian.

You’ve seen this quirky girl before; she’s yet another of the female klutzes that haunt rom-coms everywhere. An egregious example is Anand Tucker’s “Leap Day,” starring Amy Adams. The five-time Oscar nominee plays Anna, a real estate agent who has everything she wants, except that her boyfriend (Adam Scott) won’t propose to her after four long years. To get him to finally walk down the aisle, Anna follows him to Ireland, where tradition suggests that a woman is allowed to propose to a man every four years (or, like, any day she wants—but whatever). Anna flies to Wales by mistake and is chauffeured to her destination by a hunky innkeeper (Matthew Goode), but not before falling in mud at least a billion times.

In his review of the film, Time’s Richard Corliss notes that Tucker’s intent on covering his heroine in topsoil borders on pathological. But it’s not just that: He concludes that romantic comedies must hate women. “Why do the cinematographers of romantic comedies so often make their leading ladies look like that Nick Nolte mug shot?” he asks. “Adams is 35, and all we see are her crow's feet.” (As another example, he points out the case of Reneé Zellweger in “Leatherheads.)

There are so many examples of women falling down in rom-coms—and even romantic dramas—that it’s actually more difficult to think of movies in which women are allowed to walk upright without encountering a stray garbage can to topple over into. The trailer for “Good Luck Chuck,” starring Jessica Alba and a “still a thing in 2007” Dane Cook, is basically a 90-second montage of Ms. Alba setting off Rube Goldbergs of imminent chaos. She knocks over a table, she runs into a telephone pole, and she even manages to rip her panties off when her skirt gets caught in a car door.

These are extreme cases, but female protagonists manage lesser-to-equal feats of clumsiness in romantic comedies from “The Princess Diaries” and “The Wedding Planner” to “The Ugly Truth,” in which Katherine Heigl falls out of a tree. Sandra Bullock movies (“Two Weeks Notice,” “Miss Congeniality”) are especially fond of this trope, and none more so than “All About Steve,” in which Bullock’s character stumbles into a pit of deaf children while pursuing the object of her affections. It’s so feverishly bizarre it needs to be seen to be believed.

If Slate’s Rebecca Onion argues that the real definition of relatable is closer to “humble,” “vulnerable,” “awkward,” or “fallible,” that makes sense in this context. These women must be “humbled” in order to reinforce their subordinate gender role. As Mindy Kaling points out in the New Yorker, making a woman clumsy is the most “palatable” way to do so. “She can’t be overweight or not perfect-looking, because who would pay to see that?” Kaling asks. “A female who is not one hundred percent perfect-looking in every way? You might as well film a dead squid decaying on a beach somewhere for two hours.”

“Me Before You,” though, also reinforces this humbling through class status. Everyone around Louisa is successful, but none more so than Will Traynor himself— a generically handsome millionaire of the Christian Grey variety. Before his accident, Will bought and sold companies for a living. He was so rich and important that his pretty face even graced the cover of magazines. The dynamic is actually strikingly similar to “Fifty Shades of Grey,” in which the hero’s wealth and status stands in not only for his power but for his paramour’s lack thereof.

“Me Before You” only plays up these power dynamics, as the poor, working-class Louisa herself is shown to have few ambitions outside of her social standing. Although she once dreamed of going to fashion school, she’s become happily resigned to a life of watching television and hanging out with her fitness enthusiast boyfriend (Matthew Lewis of “Harry Potter”). But even the film’s obvious Baxter—destined to be dumped and left behind in Lou’s quest for love—has more going on than she does: Patrick been named “Entrepreneur of the Year” several years running.

A character’s flaws and foibles don’t have to be part of an evil sexist plot against female protagonists everywhere. In “Bridget Jones’s Diary,” the fact that the title character is constantly drinking, swearing, and saying the wrong thing is what makes her human. In a post for Equals, Liz Matsushita writes that the difference is that we’re seeing life through Bridget’s eyes: “‘Bridget Jones’ is like a fairy tale where, instead of being presented as the ideal, everything in her life is seen through her eyes as never measuring up to an idea—that ideal perhaps arguably being informed by other representations of women in pop culture.” She might see herself as a disaster, but Bridget Jones is actually happy, sexually active, and highly successful in her field.

Louisa does find fulfillment in the closing scenes of “Me Before You,” but it’s something of a mixed message. Will sets up a hefty trust fund for his star-crossed lover, thus allowing to her dream bigger than the life that her tiny English town allows. If the Heigl canon presents the dynamic between men and women as a contemporary version of Katherina and Petruchio—the shrew tamed by the chauvinistic male—allowing Lou liberation is certainly a small step forward. But wouldn’t it be nice if, for once, the heroine could come into her power without a man’s benevolence? And wouldn’t it be nice if she were powerful already—sans humbling?