Internal NSA docs show the whistleblower tried to work within the system, but had no choice but to leak to journos 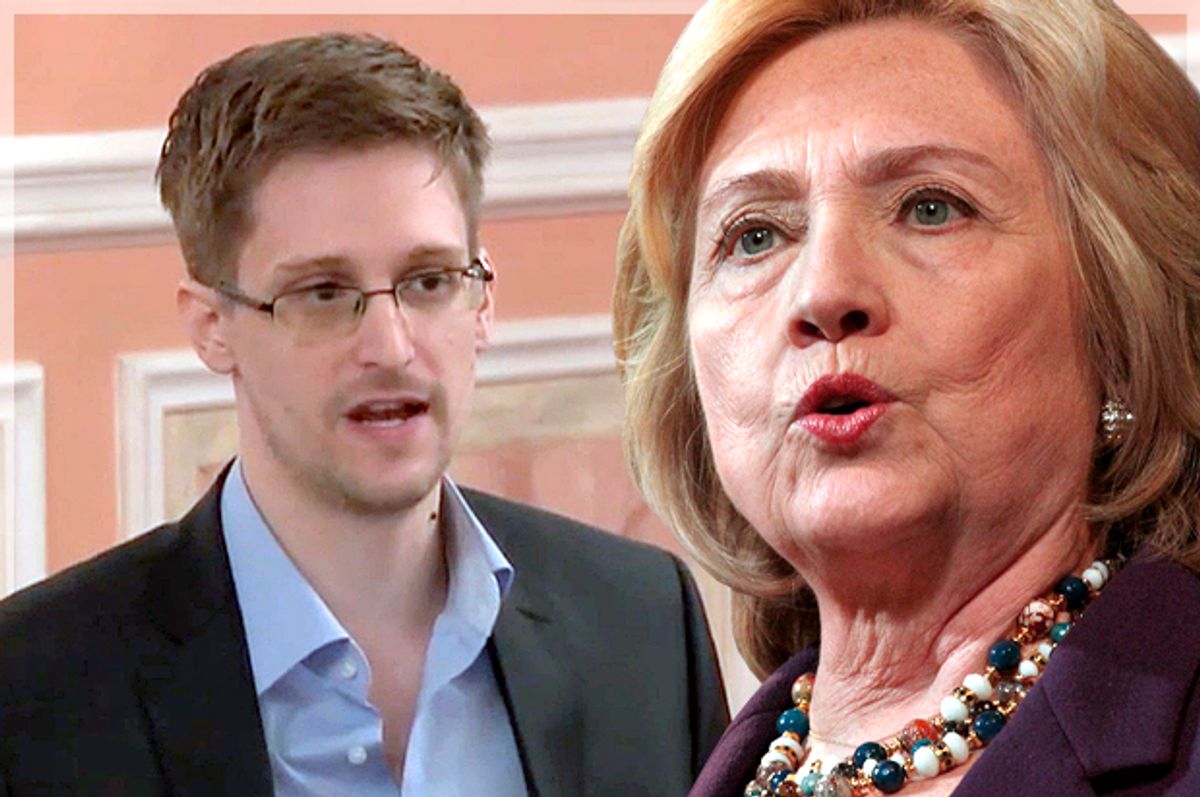 Hundreds of internal NSA documents declassified and released by journalists prove that claims made by senior officials in the Obama administration and prominent politicians like Hillary Clinton, who accused Snowden of failing to use available whisteblower protections, are false.

VICE News obtained more than 800 pages of documents, including emails, talking points and other records, in response to its long-running Freedom of Information Act lawsuit. These "call into question aspects of the U.S. government's long-running narrative about Snowden's time at the NSA."

Many of the documents are heavily redacted, but they also provide "an extraordinary behind-the-scenes look at the efforts by the NSA, the White House, and US Senator Dianne Feinstein to discredit Snowden," VICE noted.

U.S. government officials have previously claimed that Snowden did not raise concerns about illegal mass surveillance before leaking classified documents to reporters. The NSA originally insisted that Snowden had simply sent a single email raising concern of potential overreach.

Internal documents, on the other hand, VICE News writes, reveal "that not only was the truth about the 'single email' more complex and nuanced than the NSA disclosed to the public, but that Snowden had a face-to-face interaction with one of the people involved in responding to that email."

The exposé also reveals that the NSA admitted to altering emails related to its discussions about Snowden.

In a letter obtained by VICE News, Justice Department attorney Brigham Bowen explained that timestamps and to/from/cc lines in emails were incorrect and "unavoidably altered." He blamed it on "a technical flaw in an operating system."

In the October Democratic presidential debate, moderator Anderson Cooper asked Hillary Clinton if Snowden was a "hero or traitor." Clinton strongly implied that he was the latter.

Cooper followed up asking if Snowden should do jail time. Clinton replied, "he stole very important information that has unfortunately fallen into a lot of the wrong hands. So I don’t think he should be brought home without facing the music."

In her response, Clinton echoed a debunked story that claimed that Russia and China got access to Snowden's classified documents. The shoddy report originated in a right-wing British newspaper that referred to Snowden as a pilfering "fugitive" and cited no evidence, only unverifiable claims by anonymous British officials.

To date, there is no evidence Snowden's leaks jeopardized U.S. security in any tangible way. The Obama administration has frequently claimed this, but thoroughly redacted its official reports on how this is supposedly true to such a point that no one can actually read its justification.

Clinton, nevertheless, is by no means the only one to have accused Snowden of failing to raise concerns inside the NSA and enjoying the ostensible concomitant whisteblower protections. Many other politicians have used the same argument to criticize Snowden, including President Obama himself.

Yet, as The New Yorker noted at the time, "From a civil-liberties perspective — and a factual perspective — Clinton’s answers were disturbing enough that they warrant parsing." The argument "doesn’t withstand inspection."

At the time, it was already known that this argument was flawed. In its fact check of the October debate, The Washington Post noted, "Clinton is likely wrong that Snowden would have received the protections of a whistleblower."

A hard-hitting report in May further confirmed that the claims made by Clinton, Obama and more are simply wrong. John Crane, a former senior Pentagon investigator, told the media that past whistleblowers have faced harsh retaliation from the U.S. government. Crane even revealed that Pentagon officials destroyed documents relevant to the whistleblower's defense.

This led Fortune to speculate that "Edward Snowden might have had no choice but to leak to the media."

In media appearances, Snowden has always firmly maintained that he had repeatedly raised concerns while at the NSA, and that his concerns had been ignored.

In his testimony to the European Parliament in March 2014, VICE noted, Snowden was asked whether he "exhausted all avenues before taking the decision to go public."

"Yes," he replied. "I had reported these clearly problematic programs to more than 10 distinct officials, none of whom took any action to address them."

"As an employee of a private company rather than a direct employee of the U.S. government," continued Snowden, who had been an NSA contractor with the consulting firm Booz Allen Hamilton, "I was not protected by U.S. whistleblower laws, and I would not have been protected from retaliation and legal sanction for revealing classified information about law breaking in accordance with the recommended process."

The hundreds of pages of internal documents from the U.S. government that are now available, VICE News emphasizes, show that Snowden "had repeatedly attempted to raise his concerns inside the NSA about its surveillance of U.S. citizens — and the agency had done nothing."

The documents detail the internal correspondence of the NSA at the time. They show how NSA officials constantly changed their takes on the story.

"The NSA, it seemed, had not told the public the whole story about Snowden's contacts with oversight authorities before he became the most celebrated and vilified whistleblower in US history," VICE News wrote.

Snowden himself declined to answer questions VICE had for its report, but the whistleblower's attorney, the ACLU's Ben Wizner, said that was because Snowden did not trust the NSA's motives for releasing the documents.

Wizner said that Snowden "believes the NSA is still playing games with selective releases," and that he "doesn't trust that the intelligence community will operate in good faith."

But even the heavily redacted documents that were released help confirm what Snowden has said all along: that he tried to blow the whistle inside the NSA, but was shut down.

In the aforementioned debate in October, Lincoln Chafee, a short-lived Democratic presidential candidate, spoke well of Snowden. The former Rhode Island Governor insisted he "would bring him home," noting that "what Snowden did showed that the American government was acting illegally for the Fourth Amendment."

Chafee also stressed a fact that has often been ignored in public discussion of Snowden's whistleblowing: A U.S. federal appeals court ruled that the NSA's systematic collection of millions of Americans' phone records is illegal.

Bernie Sanders — who, as Anderson Cooper pointed out in the October debate, was the only politician on stage who voted against the PATRIOT Act — declared in the debate that he would "absolutely" shut down this illegal NSA mass surveillance program.

When asked of his views on Snowden, Sanders replied, "I think Snowden played a very important role in educating the American people to the degree in which our civil liberties and our constitutional rights are being undermined."

"Is he a hero?" Cooper asked. "He did break the law, and I think there should be a penalty to that. But I think what he did in educating us should be taken into consideration," Sanders answered.

In the years since Snowden leaked the documents, even the former attorney general that tried to prosecute him appears to have come around.

Eric Holder, who waged a vicious war on whistleblowers when in office, admitted in an interview in May that Snowden performed a "public service" by exposing illegal NSA surveillance.

Holder was an attorney general with, as even MSNBC put it, a very "dark" record on civil liberties. Under him, the Obama administration used the Espionage Act to punish whistleblowers who leaked to journalists more than all previous presidents combined.

With Holder at the helm, the Justice Department also spied on journalists. He contributed to one of the least transparent administrations in history.

But even Holder could not deny how Snowden's actions contributed so enormously to the public good.

"I think that he actually performed a public service by raising the debate that we engaged in and by the changes that we made," he said.

"Now I would say that doing what he did — and the way he did it — was inappropriate and illegal," Holder added. Yet internal government documents show otherwise. Snowden really had no other choice.