Craig Finn looks back on The Hold Steady's "Boys and Girls in America": "Maybe it was the end of something" 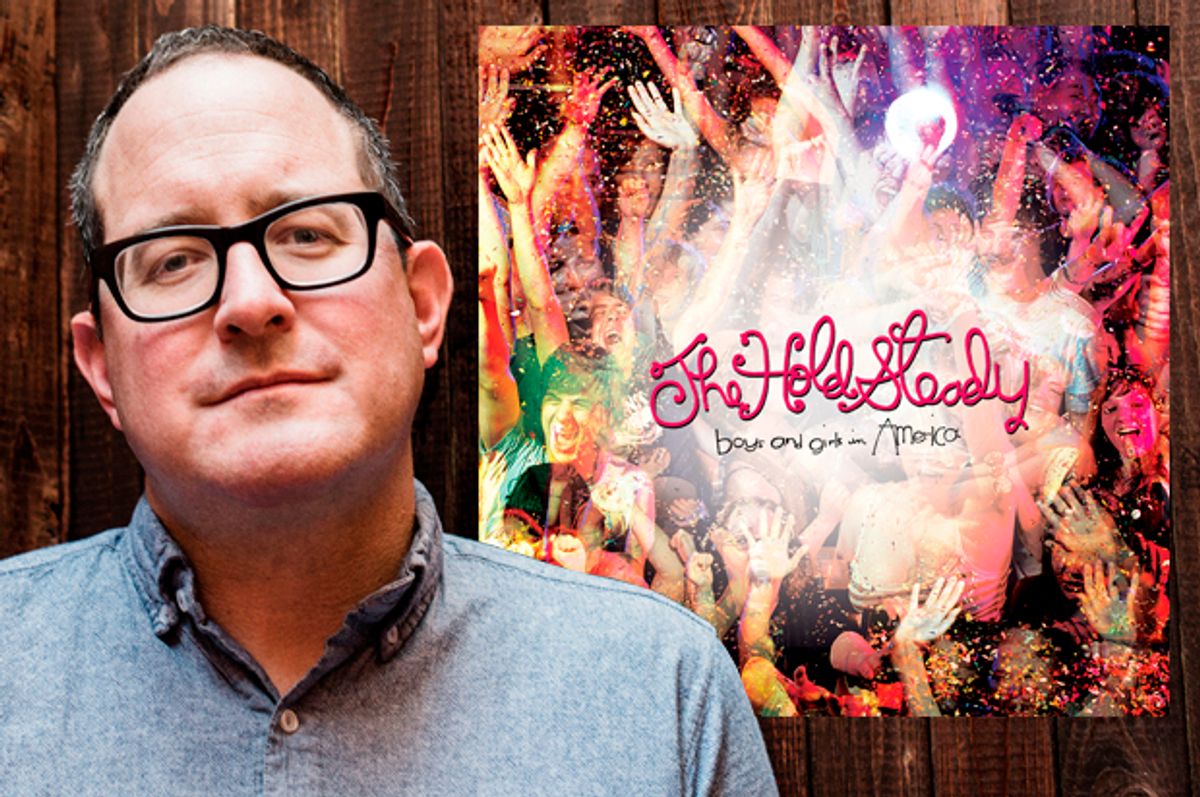 Few bands have managed to produce arena-rock sing-your-guts-out anthems à la Bruce Springsteen and the E Street Band quite like The Hold Steady. Infusing their Minneapolis and New York City roots with high-concept songs about partying and resurrection, the band spent the first decade of the 2000s building a solid fan base on tour while churning out classic records like “Separation Sunday” and “Stay Positive.” At once Catholic and character-driven, The Hold Steady’s catalog reminded audiences that rock was not only alive and well, but that it could be universal in scope.

It’s no surprise then that The Hold Steady’s recent announcement that they’d celebrating the 10th anniversary of their “Boys and Girls in America” with original keyboardist/multi-instrumentalist Franz Nicolay in tow was received with considerable fanfare. The band will celebrate their reunion with two appearances at Riot Fest in Denver and Chicago this September.

Despite The Hold Steady winding down touring and recording less frequently over the past few years, members of the band have stayed busy. For his part, lead singer Craig Finn has spent the last year touring in support of his second solo release, “Faith in the Future,” a followup to 2012’s “Clear Heart Full Eyes.”

I sat down with Finn following his solo appearance at the Shaky Knees Music Festival in Atlanta to discuss the forthcoming Hold Steady reunion, what “Boys and Girls in America” did for his band, and what’s next.

The production on your two solo records is very rich, but you can’t seem to resist the urge to play loud in a live setting. Is that only natural for you?

It’s more muscular, probably. It’s sort of natural. You get out there and put on the guitars and it’s a lot of fun. When you render these songs -- the solo records -- they’re a little more vulnerable and personal, but then you get into a space with a couple of guys and it’s a little more fun if we turn up the amps.

We did a show at Lincoln Center where we had a bigger band and a piano and it was really great to have something so beautiful and to be able to create those textures. It’s just so hard to do. It’s just better and more direct to strap on guitars and turn up amps.

And if you think of rock and roll bands that I’d call my heroes, such as The Replacements or even The Clash, there’s a lot of really weird, textural stuff on those records that they didn’t do live -- it’s just four guys.

You’ve managed to play both smaller clubs and larger festivals to promote the new solo record. How is that experience of performing in those vastly different settings?

The festival thing is fun. It’s a good hang, but you don’t usually soundcheck. You throw up your gear and then you try to play 45 minutes and it’s a bit more of a gamble. It’s nice to go somewhere and do the thing that you’re used to doing and then do the festival. I’ve done a couple of these festivals where you do two shows and I think that’s a nice way to do it.

The Hold Steady just announced a fall tour to celebrate the tenth anniversary of “Boys and Girls in America” and you’ll be joined by original member Franz Nicolay. In the context of recently releasing a solo record and taking a break with the band, what are your feelings about that album?

I think it’s still my favorite Hold Steady record. It was a really exciting time for us. Before that record, I was in Lifter Puller for a while and we had The Hold Steady for a little bit, but that was the first time we did things like [playing a festival]. So, it was kind of an entry into the establishment. All of a sudden we had laminates and tour managers and stuff like that, rather than just driving around with guys in a van. It got more pro, but I guess that’s not the thing that I liked about it. It just got bigger and it connected with a lot of people. That was really exciting for us.

You always like your new stuff too, but that one was really special. There’s something sort of magical that happens with bands at some point. It’s not like you’re doing anything different, but for some reason, it just connects. I think about that when I see bands like Beach Slang right now. They’re really connecting with people and they’re really excited about it. It’s on both sides. It’s happening musically, but it’s also happening with the audience.

When I think about “Boys and Girls in America,” I’m very proud of what we did, but the audience came from the other side of it, too. They reacted and joined in.

Are the gears also turning to produce new material for The Hold Steady?

I’m not sure. We haven’t really been playing, so we’ll have to see how the shows go. It’s just too early to say. The Hold Steady has something like a hundred songs in our catalog. That seems like a lot. And that happens to any band that’s been around a while. It’s not a frustration, but it is a reality of any band -- from The Rolling Stones to Bruce Springsteen -- people want to hear the old stuff. Playing shows might be enough. I don’t know, though.

Perhaps there’s a nostalgia for a record like “Boys and Girls in America” because it’s one of the last of its kind.

It sold something like 100,000 hard copies. That is unheard of now. Ten years ago you had things like Borders and Virgin. Whole chains are now gone. So, yeah, it was part of something. Maybe it was the end of something.

In light of that changing culture, do you think that live performances take on a greater significance?

Yeah. Everything is so fleeting -- even press. I remember being in Blender Magazine and getting a huge article. That thing sat in waiting rooms and on people’s coffee tables for a month. That doesn’t happen anymore. Things are on your desktop for like, nine minutes now. Now it’s, “Oh, that was on Twitter this afternoon.”

I do think the live thing is important. When [The Hold Steady] started doing festivals, I realized how much that people are using them as a music discovery tool. People go to Coachella and then check out a band they don’t know and that guides their listening habits for the next two years. There’s always a pleasant crowd of people.

It’s obvious that you pour a lot into the craft of songwriting. Do you have any interest in other forms of writing?

I’ve dabbled with some other things -- attempts at novels, which have gone poorly. I’ve also done some TV stuff, which has gone better, but not beyond development stage.

I’m 44. I don’t want to do 200 dates this year. [laughs] I think, on some level, what I do is storytelling. At least that’s what it’s an attempt to be. So, I want to stretch some of those things out.

I sort of feel like the novel is still the most exciting thing. When you have a novel that you’re enjoying, you completely go into a different world. I’m always reading contemporary fiction.

My girlfriend and I are always joking that I tend to like books that are about people like me and that have the same problems as I do. I don’t like wizards or gangsters. I like books about dudes walking around and over-thinking things. Those books are just as important to me as any band.

You’ve got a bit of a break before The Hold Steady reunites. How are you going to fill the time?

Well, I made another solo record. I write all of the time. We don’t have a date yet, but it’s between 90 and 95 percent done. I made this record with a similar crew as “Faith in the Future” in Upstate New York. I think we’ll have it mixed by July and then we’ll figure out when it’ll come out.

With The Hold Steady, it’s a whole band. With the solo stuff, I can control it. I can say, “Okay, the songs are done. Let’s go do this.” My solo thing moves at my pace, which is fast.