It's all a con: Trump's presidential campaign is as big a scam as Trump University

Like his sham "university," the GOP nominee's entire campaign is built on a foundation of lies and false promises 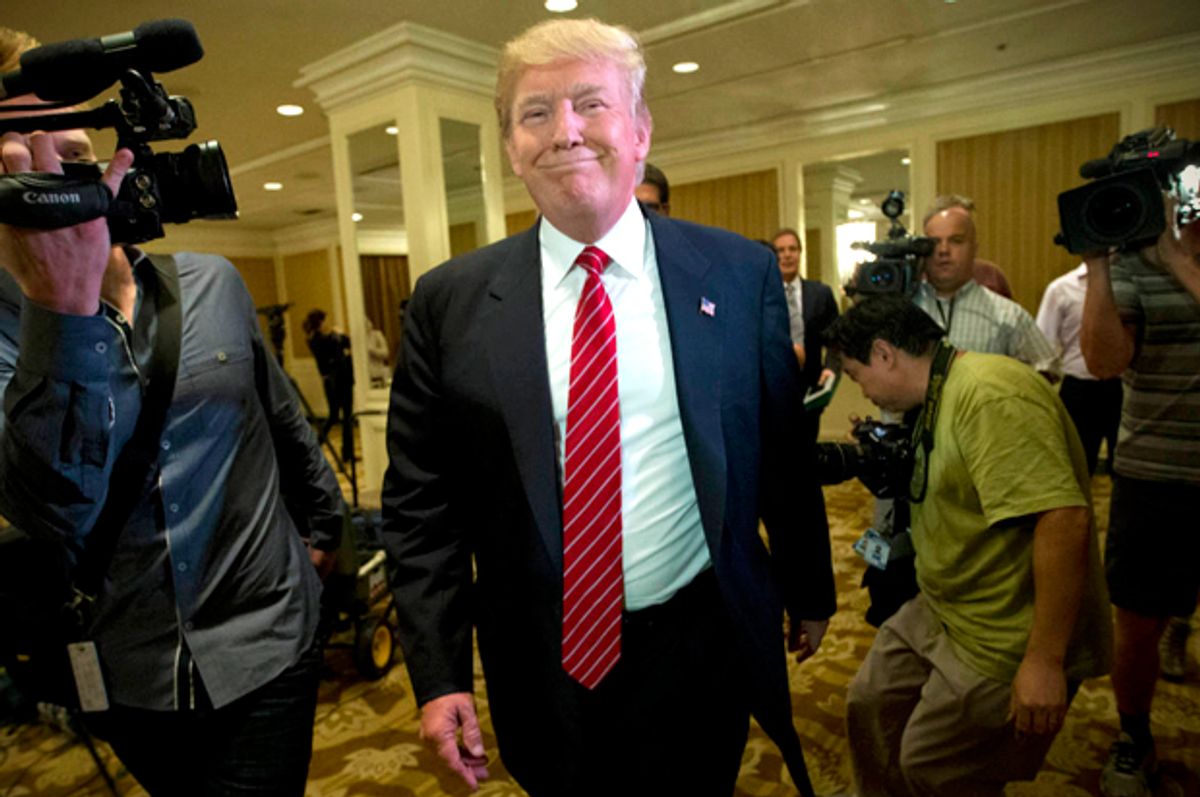 There is no longer any doubt that Donald Trump’s defunct real estate school, Trump University, was one big scam that operated to swindle credulous people out of their money. As Ronald Schnackenberg, a former sales manager at the for-profit venture (who was once reprimanded for not pushing hard enough to sell a $35,000 “elite program” to a couple who had “no money to pay for the program” and would have had to take out an equity loan on their apartment and used disability income) wrote in his testimony:

“I believe that Trump University was a fraudulent scheme and that it preyed upon the elderly and uneducated to separate them from their money.”

Much like Wall Street predators who sold subprime mortgages to unknowing Americans with promises of incessant growth in home value, Trump University sold bogus educations to bright-eyed working people, promising to teach them “better than the best business school.” And it was the promises that ultimately got Trump in trouble with the law. Falsely claiming that instructors were “handpicked” by Trump; calling them “professors and adjunct professors,” which they were not; deceptively promoting itself as an accredited school with the authoritative “University” in its name (New York regulators forced him to change the name in 2010). The for-profit educational venture was almost entirely concerned with the profit aspect, and gave “seminars and classes across the country that were like infomercials, constantly pressuring students to buy more.”

For a populist candidate who has sold himself as a common man fighting for Joe Average, preying on vulnerable, average Americans is certainly not a good look — which is why Donald is so furious that Judge Gonzalo Curiel ordered the public release of company records. This fiasco affirms what many people already knew: Trump is a snake-oil peddling charlatan for the 21st century; the lovechild of P.T. Barnum and George Wallace.

Donald has always been a showman and a shameless self-promoter, and now scam-artist can be added to his resume. Even though the celebrity billionaire was born on third base and has enough money to live luxuriously many lifetimes over, he still couldn’t help scamming people for some extra cash (or was it simply a vanity project?). This says a lot about what kind of person he is — unethical at best, criminal at worst.

Of course, his political strategy has been a lot like his business strategy, and the huckster is now trying to pull off the biggest con of them all: getting America to elect him president. Over the past year, Trump has been a entertainer, grabbing all of the headlines with his petty feuds and unpredictability; a brash self-promoter, boasting about everything from his net worth to his penis; and a charlatan, promising the world to his supporters while offering almost no substantive plans on how to accomplish any of it.

The policies that the Trump campaign has put forward are shockingly impractical and dangerous — from his proposal to deport 11 million people (which would cost hundreds of billions of dollars) to his tax plan, which would add an estimated $10 trillion to the debt over the next decade. Most economists agree that if Trump accomplished his most notable policies — mass deportations, getting into aggressive trade wars, slashing taxes for the wealthiest — he would quickly send the economy spiraling into another recession.

Meanwhile, the billionaire has made erroneous claim after erroneous claim, all to fire up uninformed Americans and stir up resentment (one can never be sure whether Trump is ignorant himself or he is simply lying because he knows he can get away with it). He has said that Muslims were cheering in New Jersey on 9/11; he has falsely claimed that President Obama wants to take in 250,000 Syrian refugees; he has insisted that unemployment may be as high as 42 percent; he has stated the GDP growth is at zero percent; he has declared that the Mexican government deliberately sends “the bad ones over”; he has said America is the highest taxed nation in the world; it goes on and on. The lies are endless, and of his statements checked by PolitiFact, only two percent have been ruled true, while sixty percent have been utterly false.

One of his most vocal advocates, Breitbart writer (and full-time troll) Milo Yiannopoulos, provided an insight on Twitter when he was asked what Trump policies he actually supports, and replied that Trumpists just want to “burn everything down.” In other words, the policies (or lack thereof) don’t matter, they just want to watch the establishment squirm. This may be accurate for his most dedicated (and privileged) supporters, but surely there are voters who believe that he will somehow bring back jobs, deport 11 million people, and so on — they don’t know how, and they don’t really care how, but they have faith (just like the students at Trump University).

One underlying theme of Trump’s presidential campaign has been his hostile, anti-intellectual attitude — he is almost disdainful towards facts and expert opinion. The billionaire seems to pride himself on his ignorance, and has no desire to learn or familiarize himself with the issues — even now that he is the presumptive GOP nominee. In many ways, he is a reflection of much of America. Proud, prejudiced, patriotic, ignorant, materialistic, belligerent. He is also rich and famous, which millions of Americans aspire to be one day (there’s a reason why “business” is the No. 1 major at real universities). All of this makes Trump very appealing to average people, who see a billionaire who thinks and acts just like them.

The Trump University scandal doesn’t help his populist image, and it creates an opening for the Democrats to expose him as the fraud he is — but if anyone could pull off the biggest con in American political history, it’s Donald Trump.