Does Rep. Marsha Blackburn know where babies come from? Her congressional panel activities suggest she doesn't

Blackburn is outraged that .03% of abortion patients go to the hospital, even though 99% of childbirth patients do 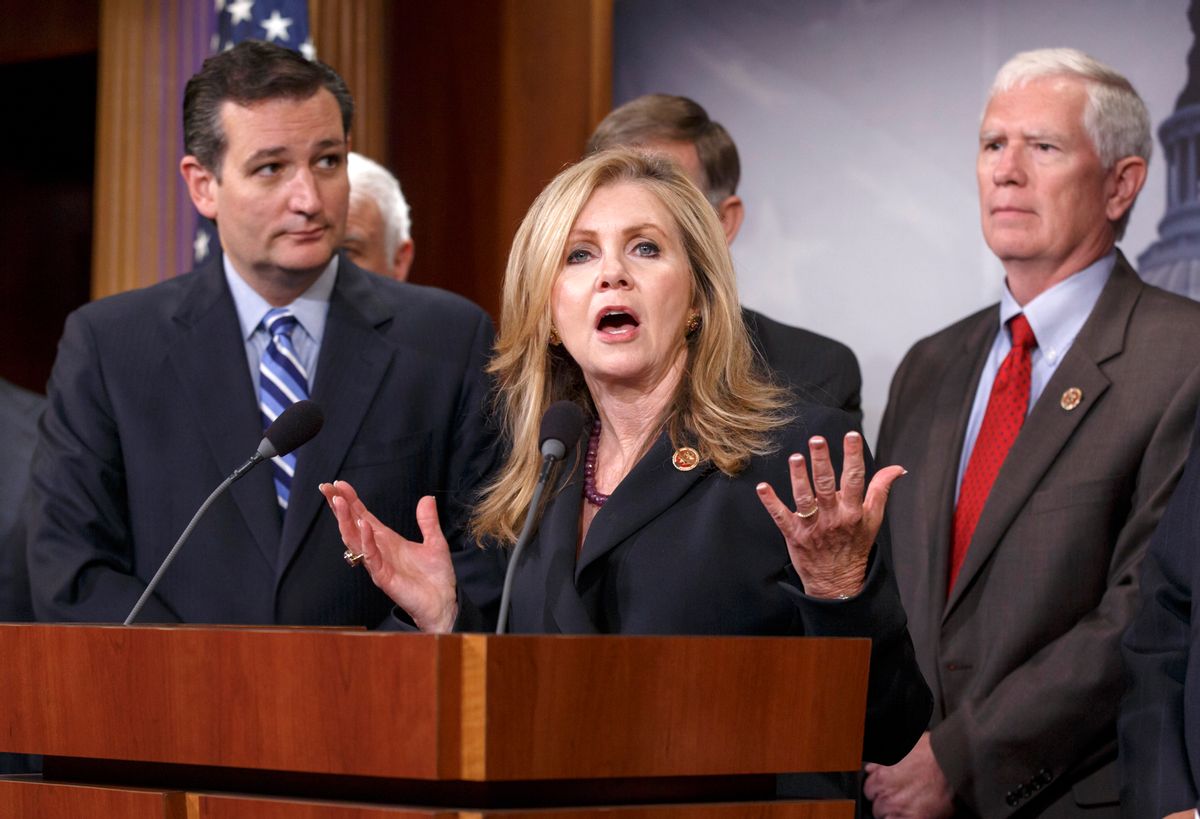 Does Rep. Marsha Blackburn know where babies come from?

One would think that Blackburn, the mother of two children she presumably gave birth to, is well aware that babies come out of a woman's body during a process that is physically taxing, painful, dangerous and frequently requires hospitalization.

But recent maneuvering by Blackburn in her role as the head of a congressional "investigative panel" (read: McCarthyist harassment campaign) into abortion providers suggests that Blackburn is completely unaware that pregnancies that are continued to term end in childbirth.

At issue are some justifications Blackburn has been rolling out for her subpoenas and other pseudo-investigations of abortion providers. Blackburn claims that the subpoena of Dr. Leroy Carhart, who is one of the few doctors in the country who offers post-26 week abortions to women in the case of serious pregnancy complications (usually severe fetal defect or death/injury to the woman), is necessary because five whole women who have been to his clinic since December reportedly had complications requiring hospitalization.

"Reports regarding the Germantown clinic are deeply troubling, both for the sake of babies whose lives are ended so close to—and possibly even after—birth and for the sake of the women who have been rushed from that clinic to the hospital with increasing frequency," Blackburn said in a press release, employing her usual tone of thoroughly disingenuous smarm.

As Christine Grimaldi at Rewire reports, Blackburn's attempt to make abortion seem super dangerous is based on flat-out lying to people. The rate of hospitalization for abortion complications is incredibly low. One study in California found that about .03% of abortion patients require admission to the E.R. Many of those patients do not end up actually being hospitalized, either, as the complications are relatively minor or easy to deal with. Later term abortions have somewhat higher rates, due to the complexity of the procedure, but it's still low, at .41% of cases.

But it's clear that Blackburn and her allies think that if any woman goes to a hospital, ever, from abortion, that shows that it's just too risky and needs to be banned for women's own good. Because goodness, we wouldn't want any woman doing something that runs any chance of her ending up in a hospital, now would we?

Which is why this entire line of discourse makes one wonder if Blackburn knows where babies come from. Her stated rationale for opposing abortion is that she is so damn worried that women might need hospitalization that she would do anything to prevent it, right?

But what, exactly, does Blackburn thinks happens to women who don't get abortions? That they go their merry way, never enduring any physical changes that lead to hospitalization? That they run around, doctor-and-hospital-free for nine months before they wake up one morning with a lovely baby that grew up in a cabbage patch, just waiting for them, having been neatly placed on a pillow by the stork?

Anti-choicers really hate talking about this, but the alternative to abortion is many more months of pregnancy, terminating in childbirth, which is exponentially more dangerous than abortion.

Consider the hospitalization rate of Blackburn's proposed plan of forced childbirth for everyone who gets pregnant. According to the CDC, 98.64% of births in America in 2011, the last year they have on record, were in a hospital. That means that, for women denied an abortion under Blackburn's proposed policies, there is a nearly 99-out-of-100 chance that they will be going to the hospital.

Maybe it's that Blackburn is really, really bad at math, so bad that she doesn't realize that 98.64% is a bigger number than .03%. But hey, I'm a feminist and I reject the stereotype that women are bad at math. The likelier explanation is that Blackburn, being a prudish, anti-woman religious fanatic, is unwilling or unable to admit that babies come out of women's bodies in a process that's very dangerous and therefore is handled in hospitals 98.64% of the time.

Already Blackburn's  endless panel has been called out by Democrats for not being a real investigation but simply an excuse to spend taxpayer money to harass and terrorize doctors and researchers. But her hand-wringing about hospitalization, which suggests she is either lying about or ignorant of the fact that pregnancies brought to term end in childbirth, shows she is so out of touch with or unable to deal with the physical facts of pregnancy that she has no business being on a congressional committee supposedly devoted to investigating women's health care.

In the real world, safe abortion care is a critical part of women's health care not just because it gives women autonomy and sexual freedom, but because it also reduces the incidence of maternal mortality and injury. This is doubly true when you're talking about patients like the kind Dr. Carhart deals with. Women don't get abortions at 27 weeks because they decided, many months into their pregnancy, that they changed their mind. These are cases where something went wrong with the pregnancy, either a fetal defect or, in many cases, the woman had health problems that made it critical to end the pregnancy before she is injured or killed by it.

"The Maryland Board of Physicians, one of the targets of Blackburn’s subpoenas, indicates that Carhart is in good standing," Grimaldi writes. "The board’s online practitioner profile system lists no Maryland disciplinary actions, no pending charges, and no reported malpractice judgments and arbitration awards within the past ten years."

The "reports" of women being hospitalized come from nosy anti-choice fanatics invading people's privacy. Not one of these "reports" stems from a situation where a woman was hospitalized due to anything Carhart did wrong. In one case, where anti-choicers went wild after a woman was hospitalized and died after visiting Carhart, it turned out that she died because of complications from the pregnancy, which appeared wanted and seems to have been terminated because something went seriously wrong. So, to follow their logic, it's worse for a doctor to try to save a patient and lose them anyway than for a doctor to refuse intervention and let nature take its course, even if that means losing the patient.

But it's not really worth trying to piece together the logic of anti-choicers, who are, after all, people who are cagey about admitting that the result of abortion bans is forced childbirth. The real problem here is that someone is heading up a congressional committee, despite being  so caught up in this ideological pretzel logic that she can't admit that pregnancies carried to term result in childbirth that result in hospitalizations, i.e. something even 4-year-olds understand. Such a person has no business being in congress, much less heading up panel investigations.