Donald Trump is a racist. Not a dog-whistler but a consistent, reliable white supremacist

The GOP nominee has made no secret of his views about minorities. What took Republicans so long to take notice? 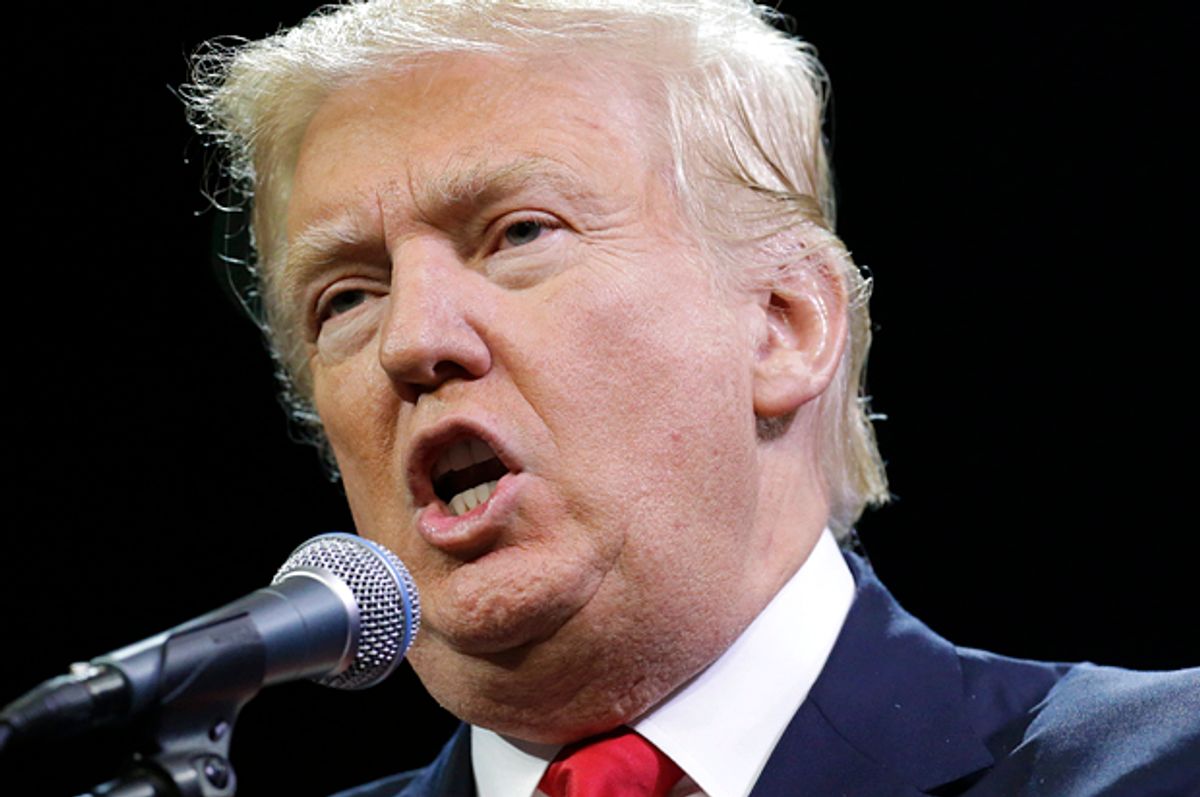 Dana Milbank’s June 6 article in The Washington Post was aptly headlined, “Republicans finally discover that Trump is an actual racist.” Not a virtual racist, not a borderline or occasional or slip-of-the-lip racist, but a dyed-in-the-wool, consistent, reliable racist, a white supremacist who stereotypes with abandon and abuses vast categories of human beings for their whatever and wherever.

Examples are beyond legion. If for some reason you’ve missed out, consult the June 6 edition of Brian Lehrer’s show on WNYC for a sampling of Trump’s race-minded slurs. By now they must add up to an entire kiloslur.

What took so long for Republicans to make their discovery? And how have journalists done in noting Trump’s pattern of falsehoods and abuses directed at millions of people?

Two intertwined questions arise. What took so long for Republicans to make their discovery? And how have journalists done in noting Trump’s pattern of falsehoods and abuses directed at millions of people?

After all, one doesn’t want to jump to conclusions with the R word. In the farther reaches of American campuses, for example, some students are too quick to call “racist” at underrepresentation by color in the curriculum, or for what have been named “microaggression” slights. Conservatives are quick to denounce such rhetorical excesses.

But rhetorical excesses are not what’s roiling American politics. What we’re hearing is the white supremacy that speaks unabashedly of roundups, walls and rapists of color. Winking and nodding won’t serve the Republicans anymore. Dog whistles have been superseded. What Donald Trump is about is no mere rehash of the launch of Ronald Reagan’s 1980 presidential campaign, with the candidate’s “states’ rights” speech in Neshoba County, Mississippi, site of the 1964 murder of three civil-rights workers. What we hear now is the raw thing itself, the old-time irreligion, the rock-bottom roar of a sewage stream that always lay beneath the surface but now has erupted.

Trump isn’t doing this all by himself. He has company. He’s circulating and amplifying and discharging the sewage for others to channel. Take, for example, this remark made last month by Karl Rove (white Republican male) to Donna Brazile (African-American Democratic female). They were in Las Vegas at a gathering of hedge fund managers. Rove said, as reported by Financial Times columnist Mary Childs:

“‘I did you a great favor bringing you into politics in the 1860 campaign and this is how you repay me? We’re happy you got the right to vote but it wasn’t your current party that was responsible for it.’

“The 1860 presidential election of Republican Abraham Lincoln sparked the American civil war, eventually bringing about the abolition of slavery. Ms. Brazile good-naturedly volleyed back that due to her gender she could not have voted until 1920.”

Rove once enjoyed a high reputation as an aficionado and sage of American political history. Interestingly, he takes credit for emancipation in the first person: “I did you a great favor.” He wants you to know the name of the club he belongs to — white Americans. Note the affinity with Trump’s recent shout-out to “my African-American” at a California rally.

Way back on July 1, 2015, MSNBC’s Amanda Sakura was noting a Trump insult pattern that few better-known journalists had caught on to yet. But what about Trump’s Republican rivals? Ted Cruz was saying, “I like Donald Trump. I think he’s terrific, I think he’s brash, I think he speaks the truth.” Sakuma wrote, “Few 2016 presidential candidates in the GOP field have denounced Trump’s remarks.”

One was Jeb Bush, “whose wife is from Mexico and whose children are Mexican-American.” He chose to speak in Spanish when addressing Trump’s slurs, saying: “I do not agree with his words. They do not represent the values of the Republican Party and they do not represent my values.” George Pataki called Trump’s anti-Mexican slurs “disrespectful.” But Sakuma added, “The silence from the rest of the crowded GOP field has been deafening in the two weeks since Trump entered the race.”

When a man told Trump at a September rally in New Hampshire, “We have a problem in this country. It’s called Muslims,” and declared that President Obama was a Muslim and “not even an American,” Trump did not object. About getting rid of Muslims, Trump said: “We’re going to be looking at that.” Later, his campaign claimed Trump was referring solely to Muslim “training camps.”

This is his pattern: Utter barely plausible ambiguities in mangled syntax. Issue occasional non-apology apologies because his remarks have been “misconstrued,” like the now-notorious one about the “Mexican” judge Gonzalo Curiel. If you buy his explanations, I’d like to sell you a tall gold building on Fifth Avenue.

So it goes, on and on. Trump has tweeted phony statistics and a graphic claiming “BLACKS KILLED BY BLACKS — 97%,” sourced to the non-existent ““Crime Statistics Bureau — San Francisco.” Fact-checkers in several quarters quickly refuted the racist slander. BuzzFeed, among other outlets, pointed out that the graphic originated from Twitter feeds (at least one of which has been deleted) of Trump’s hardcore racist supporters. But I have been unable to find any on-air interviewer challenging Trump directly on his pileup of white supremacist observations or his affirmations of “great relationships” with populations he routinely insults, as per this from 2011:

And more recently, this:

That time, news media noticed — as did Jeb Bush, by now safely sidelined from the Republican race: “It’s like eating a watermelon,” he said, “and saying ‘I love African-Americans.’” Trump might as well have been bragging that some of his best friends are Those People.

Until very recently, The Huffington Post, BuzzFeed and Vox have been the main news sources building a beautiful firewall around Trump. The Huffington Post, having begun its campaign coverage by consigning Trump news to their entertainment section, rethought that decision and started inserting this editor’s note at the end of every Trump story:

“Donald Trump is a serial liar, rampant xenophobe, racist, misogynist, birther and bully who has repeatedly pledged to ban all Muslims — 1.6 billion members of an entire religion — from entering the US.”

In December, BuzzFeed editor-in-chief Ben Smith told his staff it was “entirely fair to call [Trump] a mendacious racist… he’s out there saying things that are false and running an overtly anti-Muslim campaign. BuzzFeed News’ reporting is rooted in facts, not opinion; these are facts.”

Traditional news organizations will probably consider such language out of bounds. And the English language need not be made to march in lockstep. There’s more than one way to make the point. But in the light of Trump’s attack on Judge Gonzalo Curiel for his “Mexican heritage,” it is, to say the least, peculiar that major media are still tiptoeing around.

Vox writer German Lopez isn’t having any of it:

“…Instead of calling it like it is, CBS News, MSNBC, The Washington Post and The New York Times have called Trump’s comments about Curiel ‘racially charged’ and ‘racially tinged.’ the weasel words the media typically uses to describe racism. It makes one wonder: What would it take for them to finally call Trump or his remarks just plainly racist? If claiming a qualified, vetted judge shouldn’t be able to do his job because of his race and ethnicity isn’t racist, then what the hell is?”