The GOP in California is on its last legs: The state keeps getting bluer — and that's a great sign for Democrats nationwide 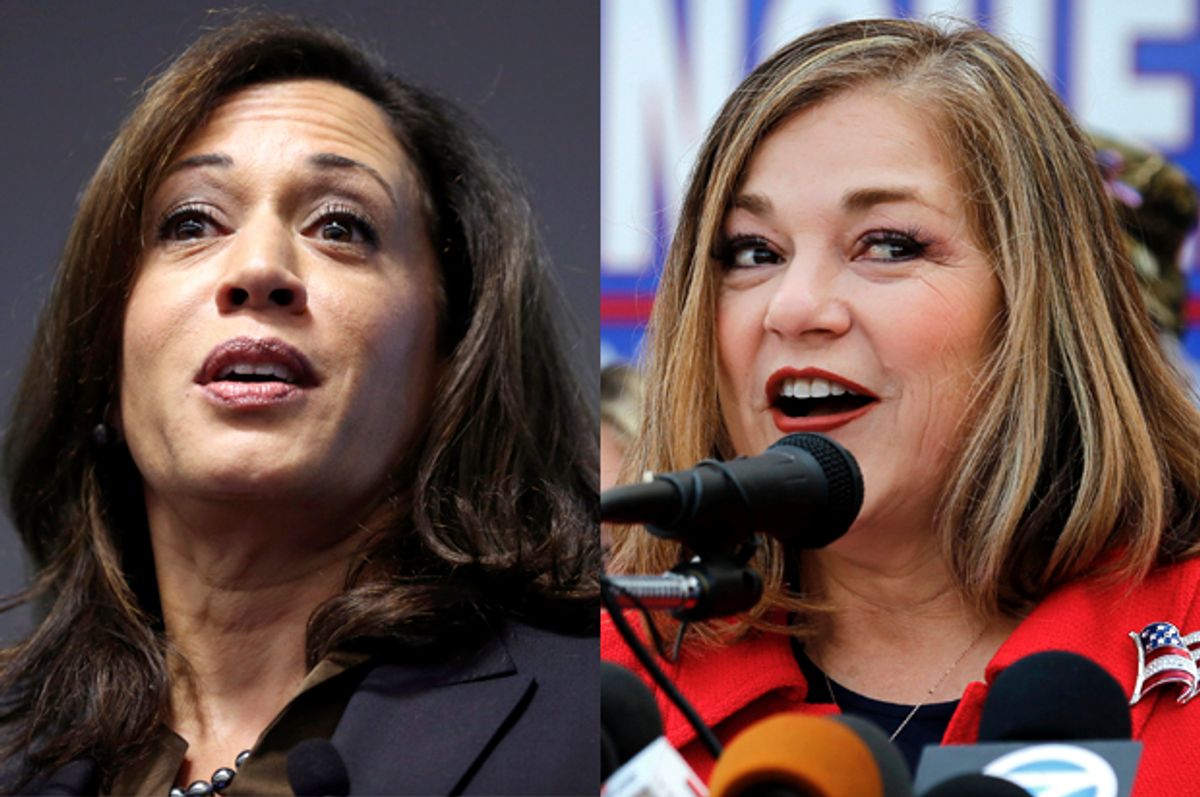 California will have quite the choice on the ballot this November to replace retiring Sen. Barbara Boxer. Will the state’s residents vote for Kamala Harris, a Democrat currently serving as the state’s attorney general? Or will they go for Loretta Sanchez, a 10-term congresswoman who is also a Democrat?

That the general election ballot will have two candidates from the same party on it happened for two reasons. One is that this result is a function of the state’s “jungle primary,” enacted with the passage of Proposition 14 in 2010. Under the system, all candidates, regardless of party, run in a single primary. The top two finishers advance to the general election in the fall.

In the case of this election, Sanchez and Harris were the top two finishers by a long shot. Harris won 40 percent of the vote. Sanchez was second with around 19 percent. The token Republican candidate, George “Duf” Sundheim, whose political experience consisted mostly of chairing the California Republican Party from 2003 to 2007, finished in single digits.

The second reason this happened is that the California Republican Party is deader than that parrot in the famous Monty Python sketch. It has shuffled off this mortal coil and joined the bleedin’ choir invisible. It is, for all intents and purposes, an ex-party.

The state’s once-proud GOP has been dying for a couple of decades now in a place where people unfamiliar with the party’s history might be surprised to learn it ever took root. But despite its reputation as a bastion of loony liberalism, there have always been plenty of conservative pockets throughout California. Sure, you have San Francisco and Berkley and Hollywood. But you also have San Diego and Orange County and the Inland Empire and the Central Valley farmers who have watched those big-city liberals and environmentalists steal all their water for a hundred years or so. This is the state that gave the nation Richard Nixon (thanks!) and Ronald Reagan (double thanks!). It was only eight years ago that the state’s voters gave us a ban on gay marriage on the same day they voted to elect the nation’s first African-American president.

But the state GOP, much like the Republican Party at the national level, overplayed its hand. For many years, it kept sending to the state legislature the kinds of uncompromising conservative cranks that have made Congress less productive than a dry, hacking cough. (A few years ago when I was living there, I heard someone say that we had a Tea Party legislature before it was cool.) That, combined with laws that prevented legislators from increasing taxes and the state’s insane ballot proposition system, kept the state Assembly from doing much more than wandering around Sacramento in search of a purpose while the schools crumbled and the economy cratered.

At the same time, the California GOP seems to have made the same decision that the national party made about demographics. It bet that there was an inexhaustible supply of frightened white people in gated communities who would keep returning the party to office so long as it cracked down on illegal immigration. They didn’t see, or didn’t want to see, the state’s rapidly expanding Latino population. (How you can miss this in a place where so much of the character and flavor comes from its pre-white-people history is one of the greatest of mysteries.) The anti-Hispanic fever peaked with Proposition 187, championed by Republican governor Pete Wilson in 1994 and ruled unconstitutional by a federal court five years later. Prop 187 killed the GOP for Hispanics for a couple of generations, and it is anybody’s guess whether it will ever recover.

Since Wilson left office in 1998, the only Republican to win a race for statewide office was Arnold Schwarzenegger, who served two terms as governor. Meanwhile, the party has seen its representation in the state legislature shrink to barely a third in both houses. In 2010 the voters elected Jerry Brown as governor, returning him to the office where he served two terms in the 1970s and early 80s. (It helped that his opponent was Meg Whitman, who ran a campaign notable for both its expense and its incompetence.) Thanks to the disappearance – mostly – of the type of intransigent Tea Party legislator and the re-election of Brown, the state government has become functional again.

Sure, the most populous state still sends right-wing representatives like perennial blight on humanity Darrell Issa to the House of Representatives. And the state’s senior senator, Diane Feinstein, is not the progressive champion many would like. But California’s solidly blue character makes Donald Trump’s vow to win it this fall doubly hilarious. And the state party’s incompetence just assured that the open Senate seat will remain in Democratic hands no matter which candidate wins. In a year when the Republicans are defending a large number of seats and are likely to lose control of the chamber, that matters.

There is an old saying that as California goes, so goes the nation. If the rest of the country wants to ever start sending competent people to Congress instead of far-right crazies, we might just get a working government again.