Trump panic on the right: They've created this monster — and some are getting more desperate to find a way out 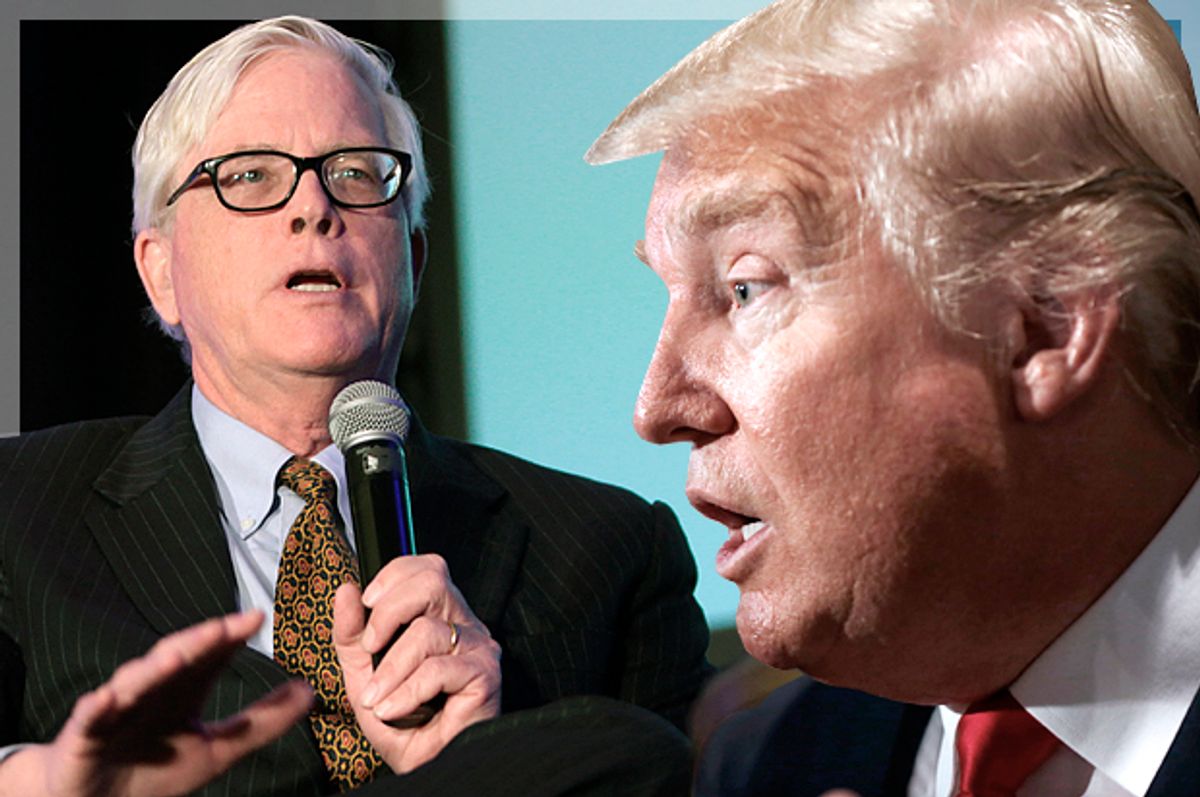 It seems odd that after an overwhelming litany of crude, demagogic insults over the course of the last year, Republican leaders have suddenly recognized that Donald Trump is a racist whose reckless rhetoric is likely to destroy the Republican Party. Evidently, the "Mexicans are rapists" comments in his announcement speech a year ago didn't ring any alarm bells. But better late than never. Party leaders Mitch McConnell and Paul Ryan both decided they needed to denounce his blatant bigotry although they made clear it wasn't a deal breaker. Better an unfit, racist, authoritarian megalomaniac than a Democrat in the White House. You go to Hades with the devil you have not the devil you wished you have.

There have been a few prominent Republicans who have publicly withdrawn their endorsements.  Senator Mark Kirk said he could no longer support Trump because he doesn't have the temperament to be commander in chief. This has also been obvious for the last 12 months but again, it's to his credit that he's belatedly decided that it's a disqualifying characteristic. He's decided to write-in the name of General David Petraeus which he may want to re-think considering the news this week that Petraeus was not only found guilty of "mishandling" classified information by sharing it with his mistress, he also shared Top Secret information with reporters. It's really tough finding a decent Republican to vote for these days.

Other GOP officials  are in various stages of panic and Trump tried to calm them with his stiff, unconvincing speech on Tuesday night without much success. But he was unrepentant and unimpressed. Before he gave the speech  he let the New York Times know exactly what he thinks of his fellow Republicans:

Politicians are so politically correct anymore, they can’t breathe,”Mr. Trump said in an interview Tuesday afternoon as fellow Republicans forcefully protested his ethnically charged criticism of a federal judge overseeing a lawsuit against the defunct Trump University.

“The people are tired of this political correctness when things are said that are totally fine,” he said during an interlude in a day of exceptional stress in the Trump campaign. “It is out of control. It is gridlock with their mouths.”

All of this has led to a new sense of urgency in the #NeverTrump camp, even though the pipe dream of knocking Trump off his recently acquired throne is as unlikely as ever. Joe Scarborough, formerly a huge Trump booster was nearly hysterical on Wednesday, saying:

It is in your hands on whether you are going to prove to the Republican Party and me personally that you’re not a bigot. Don’t use Hillary Clinton as an excuse, as your blank check to say racist things about [a judge] born in Indiana. No, Donald, you don’t get to play it that way.”

Radio and TV pundit Hugh Hewitt was one of the first right-wing media personalities to expose Trump's gross lack of knowledge about world affairs when he asked him about the Iranian Quds force on his radio show and Trump clearly had no clue what he was talking about.  Nonetheless, Hewitt promised to support Trump if he became the nominee and has stuck with him as he demonstrated his unfitness for office over and over again. But the racist attack on the federal judge has put him over the edge and he is now suggesting that the GOP must do something drastic: change the rules of the convention and give the nomination to someone else. He was so overwrought he exploded with crazed mixed metaphors on Wednesday saying, "it’s like ignoring stage-four cancer. You can’t do it, you gotta go attack it. And right now the Republican Party is facing—the plane is headed towards the mountain after the last 72 hours.”

Trump supporters were not amused:

Assume hater Hugh Hewitt will not be attending the @GOP Convention. If he is - the RNC should BAN him from attending.

But if they don't ban Hewitt from the convention and take his suggestion seriously, which some people seem to be doing, who could possibly step in?  Paul Ryan, everybody's favorite blue eyed dream boat has said he will not do it. And as noted, he doesn't believe Trump's racism --- or any other of his pathological personality characteristics --- are deal breakers in the first place so he's out.  Jay Cost of the Weekly Standard wrote an open letter to Mitt Romney to run as an Independent, but there's little reason to think he'd go along with seizing the Republican nomination from Trump at the convention and even less reason to think the delegates would want him to. But there is one possibility that has the political world aflutter: the Great Whitebread Hope himself, Wisconsin Governor Scott Walker. There was a time when he was lauded as the most formidable Republican in the land, a Harley driving, union  busting, tax cutting superman destined for the White House. Then he ran for president and showed himself to be a dud of epic proportions. He proved himself to be uninformed, boring and amateurish and ran through his millions in big donor money in record time. By the end of September he was gone, the first of the "Deep Bench" superstars to drop out.  Apparently, he's tanned, rested and ready to rumble. After months of tweeting his lunch orders and informing his followers he got a haircut, he's back in the game:

Apparently "Fighting for Us" means those who gave to Clinton Foundation or who paid BIG speaking fees to Clintons. pic.twitter.com/d0hsMBH4Wr

And this comment to a Wisconsin radio station sent a frisson of anticipation through the Never Trumpers:

He’s not yet the nominee. Officially that won’t happen until the middle of July, and so for me that’s kind of the timeframe. In particular I want to make sure that he renounces what he says, at least in regards to this judge.

The problem with this scenario is that these elite Republicans are failing to take something very important into consideration: their voters. It's certainly possible that they are in danger of losing some faction of the party over Trump's repugnant behavior. But there is little reason to believe it's a majority. This week, millions of them went to the polls and voted for him even though he had already won the nomination. Granted, he's not the electoral juggernaut he pretends to be, but he is the legitimate winner of the Republican nomination and his voters will not take kindly to having their wishes ignored.

Moreover, the Republican rank and file doesn't agree with the premise that Trump is out of bounds in the first place. This YouGov survey done after Trump made his bigoted comments about the judge show 81% of Democrats and 44% of independents believe they were racist. But only only 22% of Republicans agree. In other words, 78% of GOP voters are just fine with Trump and seem to agree with his statement that  "people are tired of this political correctness when things are said that are totally fine."

Scott Walker's ill-fated campaign fizzled so early in the primary process that he never faced the voters. His performances in the debates were rated dead last in every poll. The fact that Republicans are contemplating pulling him out of mothballs in the vain hope that he, of all people, will be able to vanquish Trump at the convention is so desperate you almost have to feel sorry for them. But then you remember that they created this monster and deserve what they're getting. Let's just hope they don't somehow manage to take the rest of us down with them.