Another neocon endorses Clinton, calling her "2016's real conservative" and "the candidate of the status quo" 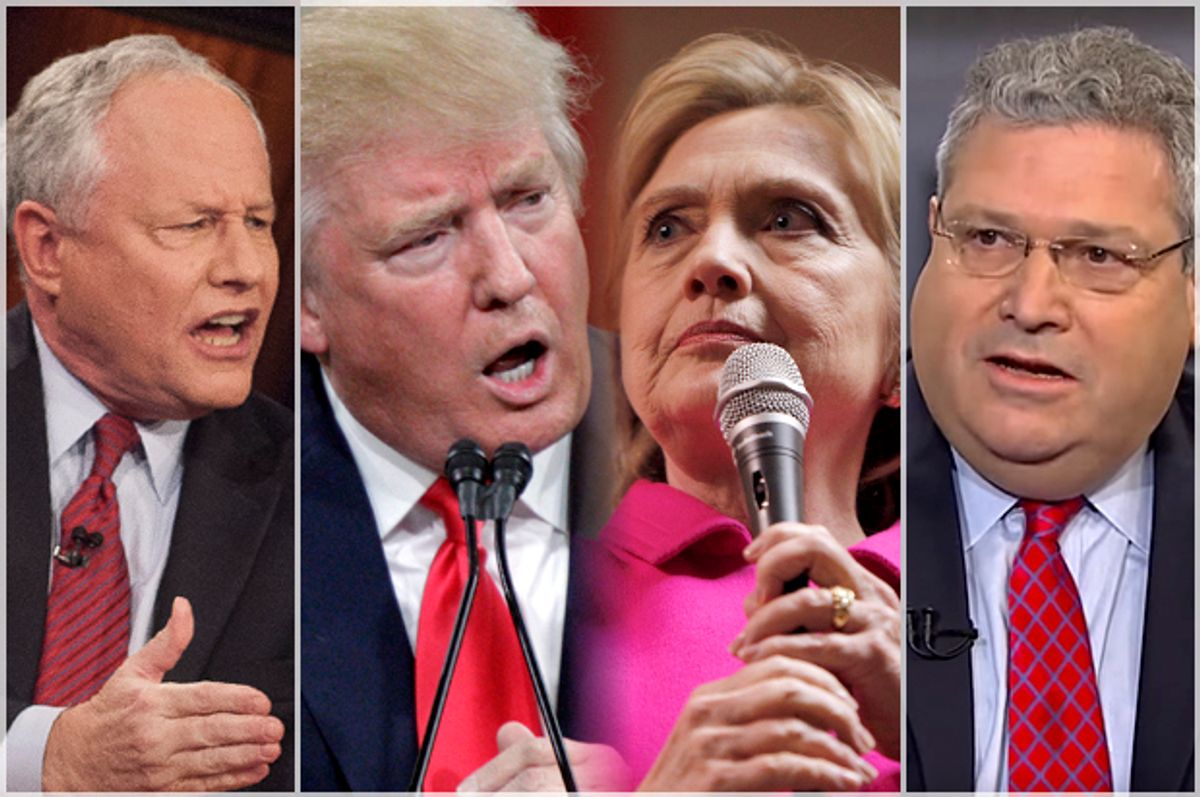 Wall Street has thrown its weight behind Hillary Clinton. Some of the biggest names in the U.S. right-wing establishment have also expressed support for her.

Another neocon added his name to the pro-Clinton list on Thursday. James Kirchick penned an op-ed in The Daily Beast titled "Hillary Clinton Is 2016’s Real Conservative — Not Donald Trump."

"Clinton is the candidate of the status quo, something that conservatives, by definition, are supposed to uphold," Kirchick writes.

"Hillary Clinton is the one person standing between America and the abyss," he says, seeing her as a mealymouthed centrist candidate with "better conservative credentials" than the alternatives.

Trump is "a brashly authoritarian populist," Kirchick continues — a "charlatan, a gruesome amalgamation of the Monopoly Man and Elmer Gantry," who is transforming "the Republican Party into an ethno-nationalist populist movement."

On the other side, Kirchick pillories self-declared democratic socialist Bernie Sanders, hysterically accusing him of helping Trump and "risk[ing] the country’s future."

"In the center remains Hillary Clinton, who, whatever her manifold faults, is the only candidate promising some form of economic, social and political continuity with the present," Kirchick concludes.

Clinton is "the clear conservative choice," he maintains, the only one who can preserve the status quo.

Kirchick is a hawkish pundit and fellow at Foreign Policy Initiative, a neoconservative think tank where leading neocons Bill Kristol and Robert Kagan sit on the board of directors.

Kagan, who served as foreign policy adviser to Republican Sen. John McCain in his 2008 presidential campaign and has been described as "the neoconservative movement’s chief foreign policy theorist," has also strongly come out in support of Clinton.

In his defense of Clinton, Kagan told The New York Times he is “comfortable with her on foreign policy,” noting it is "something that might have been called neocon, but clearly her supporters are not going to call it that; they are going to call it something else."

Kirchick and Kagan have joined numerous right-wing confrères in endorsing Clinton for president.

Max Boot, a hard-line war hawk and self-declared “American imperialist,” lauded Clinton in an op-ed in the Los Angeles Times in May.

"Clinton would be far preferable to Trump," Boot wrote, describing her as "a centrist Democrat who is more hawkish than President Obama and far more principled and knowledgeable about foreign affairs than Trump, who is too unstable and erratic."

Fellow neocon Bret Stephens also expressed support for Clinton in May, in an op-ed titled "Hillary: The Conservative Hope."

In his endorsement in The Daily Beast, Kirchick insists, "When it comes to quotidian policy matters, Clinton has better conservative credentials."

He blasts Trump for proposing "radical changes" like "undoing the global security architecture" in which the U.S. is the uncontested imperial military power and "engaging in trade wars with various countries."

"Hillary Clinton does not believe that NATO, the most successful military alliance in world history and a guarantor of peace and security on a continent marred by war, is obsolete; Trump does," Kirchick adds.

In the Democratic presidential debate in April, Clinton declared that "NATO has been the most successful military alliance in probably human history."

As secretary of state, Clinton pushed the U.S. to join NATO's catastrophic bombing campaign in Libya in 2011, which plunged the oil-rich North African nation into chaos. Thousands of people have been killed since the U.S.-backed regime change operation, extremist groups have flourished and ISIS has carved out its largest so-called caliphate outside of Iraq and Syria.

In addition to her role in pushing for the war on Libya, Sec. Clinton wrote off diplomacy in the war in Syria, instead calling for backing the “hard men with the guns.”

These extremely belligerent policies, along with Clinton's support for the illegal invasion of Iraq, the U.S. drone program, Israel's far-right government and more, led The New York Times to dub her "the last true hawk left in the race."

The Times, which endorsed Clinton for president, acknowledged that neither Trump nor Ted Cruz "demonstrated anywhere near the appetite for military engagement abroad that Clinton has."

Kirchick and other neocons have noticed.

"Conservatives insisting that Hillary Clinton is just as bad as Donald Trump are deluding themselves," he maintains.

"As egregious as the dealings of the Clinton Foundation may be, as much as her use of a private email server indicates a disturbing lack of regard for the rules, Hillary Clinton ultimately operates within the normal remit of an American political leader," he writes.

Trump, on the other hand, is the “control alt delete candidate.”

He cites Burke's intellectual heir Michael Oakeshott, who said conservative ideology “prefers small and limited innovations to large and indefinite” ones and “favors a slow rather than a rapid pace, and pauses to observe current consequences and make appropriate adjustments.”

Like liberal elites, Kirchick also condescendingly writes off Trump's working-class supporters as "too stupid," writing, "he long ago preemptively humiliated any purported 'intellectual' supporter when he declared his 'love' for 'the poorly educated' voters flocking to his campaign, the kind of thing tin-pot dictators believe but don’t say for fear of offending their base."

"The fate of the Republic hangs upon" defeating Trump, Kirchick concludes, imploring conservatives to support Clinton.