"Tell me your story, I'll tell you mine" 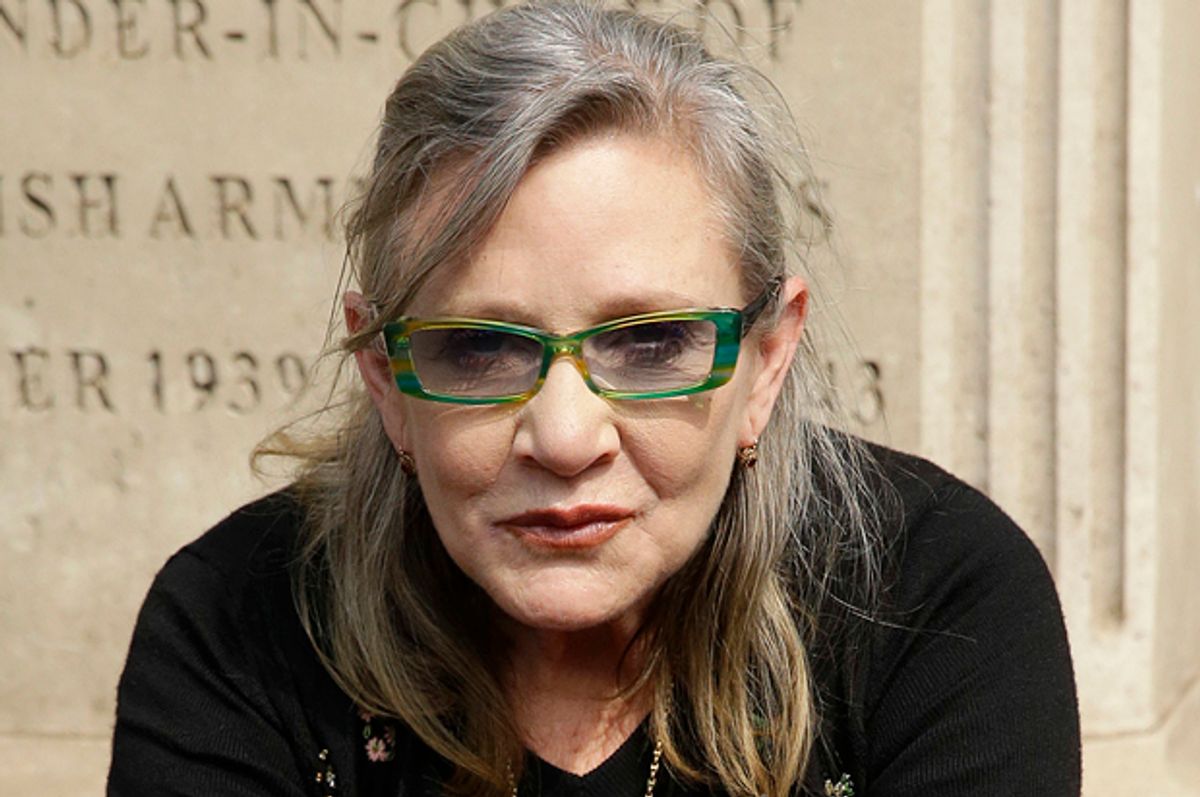 Whatever may be getting you down today, I want you to just breathe deeply, relax, and let it go. It's Friday. It's June. The world can be a beautiful place sometimes. What further evidence of that do we need that life is good than the news that perfect human Carrie Fisher is going to start penning an advice column for The Guardian? Help us, Carrie Fisher, you're our only hope!

The 59 year-old actor and author has been enjoying a well-deserved career boost over the past year, starting from the moment last fall the first trailer for "Star Wars: The Force Awakens" appeared, featuring an entirely realistically looking older Princess — I mean General — Leia. Then came her glorious press tour, accompanied as ever by her trusty sidekick and Internet celebrity in his own right, Gary the Dog. Appearing on "Good Morning America," she discussed her "transformation" for the latest installment of the franchise by saying, "Yes, I did lose weight, and I think it’s a stupid conversation," and summed up her creative choices by telling Amy Robach, "They don’t have to ask you if you want to work at that age… you’ll see someday." And when that subject of how she's aging became a seemingly nonstop point of public discussion, she firmly commanded, "Please stop debating about whether OR not aged well. unfortunately it hurts all 3 of my feelings. My BODY hasn't aged as well as I have. Blow us." She added, "Youth & Beauty R NOT ACCOMPLISHMENTS, they're the TEMPORARY happy BiProducts of Time & or DNA." Earlier this month, she gamely posed next to a wax figure of herself as the familiar enslaved in a gold bikini Leia, calling it "Before and after." Yeah, that's the voice of a woman whose advice I'd take, a woman with zero effs left to give.

Fisher has spent much of the past several years establishing herself as a fierce voice of honesty and bravery — she's talked openly about her bipolar disorder and weight loss struggles, as well as her ongoing amusement with an industry that doesn't seem to know what to do with a woman who's past gold bikini age. Now, she's inviting fans to "tell me your story, I’ll tell you mine," promising to "provide solicited advice, based on a life filled with pratfalls and accidents (both in traffic and out)." And who wouldn't trust a woman who says that after "all the drug addiction and celebration marriage and mental illness and divorce and shock treatment and heartbreak and motherhood and childhood and neighborhood and hood in general," she's pretty happy? Let's just hope that when a situation gets too sticky, she lets Gary step in with a second opinion.