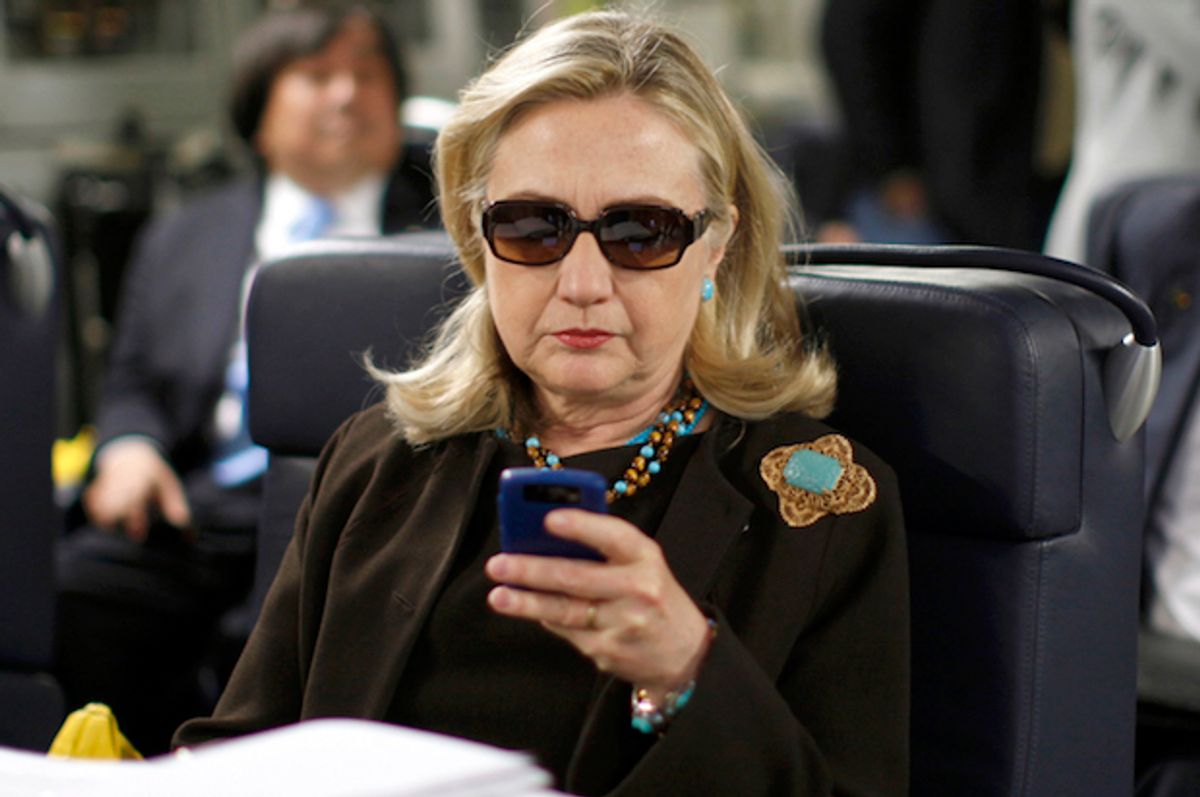 The FBI has been conducting a criminal investigation into Hillary Clinton’s handling of classified information for months.

An explosive new report reveals just what it is that the FBI is looking to: emails in which then-Secretary of State Clinton approved CIA drone assassinations in Pakistan with her cellphone.

From 2011 on, the State Department had a secret arrangement with the CIA, giving it a degree of say over whether or not a drone killing would take place.

The U.S. drone program has killed hundreds of civilians in Pakistan and other countries.

Under Sec. Clinton, State Department officials approved almost every single proposed CIA drone assassination. They only objected to one or two attacks.

The emails that are at the heart of the FBI's criminal investigation are 2011 and 2012 messages between U.S. diplomats in Pakistan and their State Department superiors in D.C., in which the officials approved drone strikes.

Clinton's aides forwarded some of these emails to her personal email account, on a private server in her home in suburban New York.

These are the revelations of a report by The Wall Street Journal, based on information provided by anonymous congressional and law-enforcement officials who were briefed on the FBI's probe.

The State Department revealed in January that 22 of the emails that were on Clinton’s private server at her home contained top-secret information. These messages were not publicly released, and an investigation was eventually launched.

The White House acknowledged in a press briefing on Thursday that the FBI probe into Clinton's handling of classified information is a "criminal investigation." President Obama endorsed Clinton for president on the same day.

Hundreds of civilians in Pakistan, Yemen, Somalia, Afghanistan and more have been killed by U.S. drones.

Pakistan is the site of more U.S. drone strikes than any other country. The Obama administration has carried out more than 370 drone attacks in Pakistan, killing as many as 1,000 civilians, including up to 200 children, according to data collected by the Bureau of Investigative Journalism.

The exact number of civilians killed is unknown, because the U.S. is very secretive about its program, and because it essentially redefines militant to mean any man of military age in a targeted area.

In 2011, some Pakistani officials pushed back against the U.S. drone assassination program, leading the U.S. State Department to ask the CIA to be more “judicious” about the timing of drone attacks. Clinton's State Department did not oppose the CIA's specific choice of targets, just their timing.

This led to a compromise in which the CIA gave the State Department some voice in the drone assassination process. Beginning in 2011, CIA officers began notifying diplomats in the U.S. embassy in Islamabad of planned attacks. The diplomats then conveyed the information to senior State Department officials.

This agreement gave then-Secretary of State Clinton and her aides personal say in U.S. drone killings.

The Wall Street Journal report provides more insight into the State Department's coordination with the CIA on the secretive drone program.

State Department officials were given notice before a planned attack, sometimes with a narrow timeframe of as few as 30 minutes. Officials told the FBI that they used a less-secure system of communication when they had to make a decision quickly before a drone killing and were not at the office.

Roughly half a dozen times, State Department officials sent emails on their smartphones in order to approve a drone assassination when they were away from secure communications systems.

Given this secrecy, law-enforcement and intelligence officials told the Journal that State Department discussion of the covert CIA drone program should have been conducted via a more secure communications system.

The criminal investigation into Clinton's emails has often been a right-wing talking point, but the scandal has much wider implications.

Reflecting on the Journal's report, award-winning journalist Jeremy Scahill, one of the world's leading experts on the secretive CIA drone program, commented, "So many liberals poo poo the Hillary email scandal for totally partisan reasons. If it was a Republican, they would be going bananas."

"People claiming emails on Hillary's private server were not classified do not understand how classification works," Scahill added. "It's an HRC talking point."

"It's acceptable to mishandle classified info on your bathroom server and share classified info with your mistress, just don't blow any whistles," he quipped, referencing the fact that the Obama administration has waged an unprecedentedly harsh crackdown on whistleblowers.

The FBI is expected to interview Clinton this summer about the scandal. Law-enforcement officials told the Journal they don't think criminal charges will be filed against her after the investigation.

Clinton herself has repeatedly confidently insisted that she is not going to be charged.

State Department spokesman Mark Toner refused to speak about the emails or the investigation.