Warren also tells Maddow, "yes, I do" believe I'm ready to be Commander-in-Chief 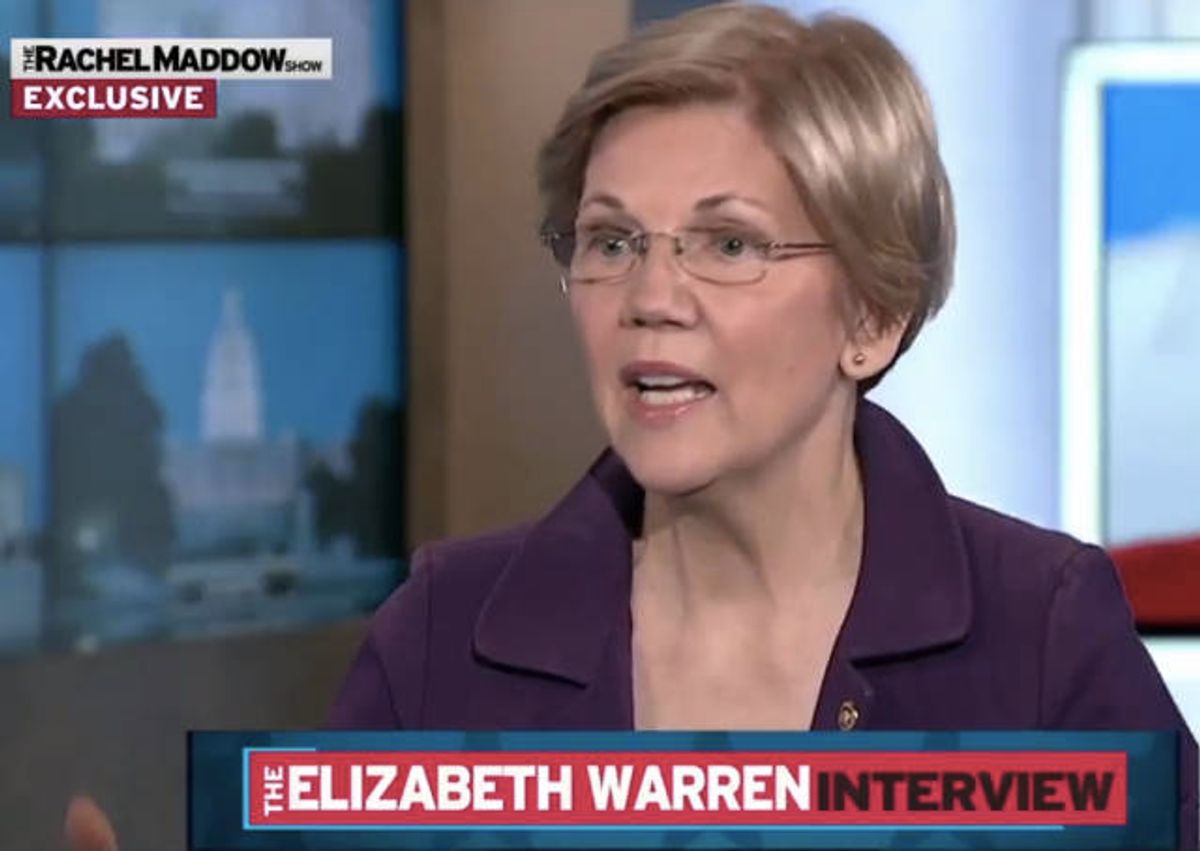 "I'm ready to get in this fight and work my heart out for Hillary Clinton to become the next president of the United States," Massachusetts Senator Elizabeth Warren told MSNBC's Rachel Maddow on Thursday, officially throwing her support behind the presumptive Democratic presidential nominee.

Asked why she waited so long to pick a candidate, the popular progressive said, "I thought that the primary was really important. And it was an opportunity for Democrats to get out there and show this is what it means to be a Democrat. We got out there and pushed those issues forward and we made sure that the American people saw the kind of thinking we have and what makes us very different from those guys on the other side."

Warren credited Sanders' campaign with "constructively" shifting the national political discourse leftwards, saying, "that's what this is all about":

I take my cue on every part of this from Bernie himself and what he said right at the beginning.  He said, this campaign, he said, what this is about, what here doing here, is about millions of people across this country, millions of people who work hard every day and just keep getting slammed.

It is not about one candidate.  It's not even about one election.  It's about all of us coming together to help fight to level the playing field, to make sure that everybody gets a fighting chance.

"What Bernie Sanders did, which is powerfully important, he ran a campaign from the heart," Warren said. "And he ran a campaign where he took these issues and he really thrust them into the spotlight. And he also — these are issues near and dear to my heart. And he brought millions of people into the process, into the Democratic Party, and for me, that's what this is all about."

But, Warren added, "Hillary Clinton won, and she won because she's a fighter."

Now, after Clinton had secured a majority of pledged delegates to edge out Vermont Senator Bernie Sanders after a hard fought primary battle, Warren said she would work endlessly "to make sure that Donald Trump never gets anyplace close to the White House":

Say good-bye to the Affordable Care Act.  That means 20 million people who lose their health insurance, just like that.

Say good-bye to Dodd-Frank and all of the financial reforms and efforts to try to rein in Wall Street.  Just say good-bye to it.  That means we can go where Wall Street gets to call the shots again.  We saw how that worked out in 2008.

And say good-bye to a Supreme Court that is truly open and balanced and looking out for the American people.  Instead the Republicans just want to capture a right-wing court for another whole generation.

I look at those things and I think about what's at stake.  It's literally people's lives.  It's our economy.  It is the very fabric of our democracy.  For me, that's the heart of what the Democratic Party stands for.  That is what we fight for.  That's why we're in this fight.  That's why we've got to win.

And after former Pennsylvania governor Ed Rendell said on Thursday that he believed the freshman senator was not prepared to be Clinton's vice president, Warren flatly told Maddow otherwise.

"If you were asked to be Secretary Clinton's running mate, do you believe you could do it?" Maddow asked Warren. "By that I mean, the most important job of being a vice president is to be ready to be president if God forbid something happened to the commander-in-chief."

"Yes, I do," Warren replied, without missing a beat.

Watch Warren's two-part endorsement of Clinton below, via MSNBC: