"Real O'Neals" star walks back explosive Bryan Singer comments: "I admit there is no basis for any of the things I said or implied" 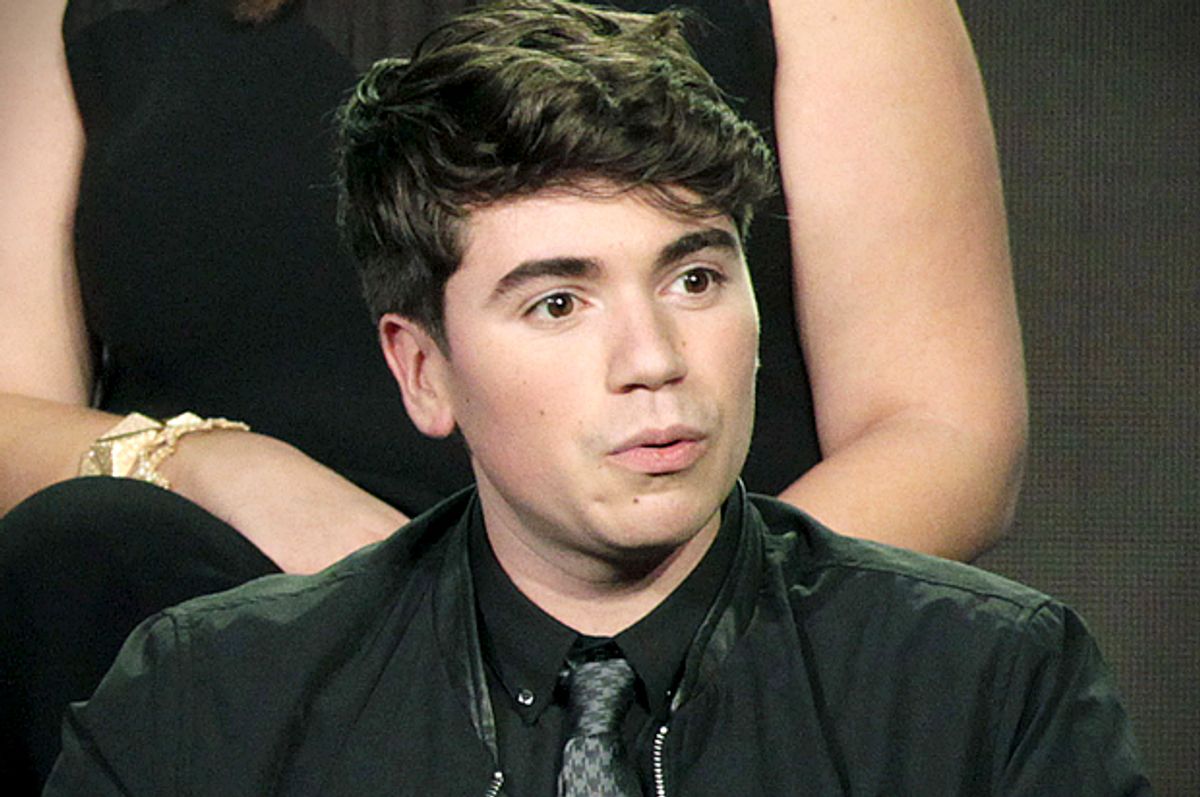 That sound you hear is Noah Galvin and his opinions, forcefully walking back. In a blistering conversation this week with E. Alex Jung for Vulture, the 22-year-old star of the recently renewed "The Real O’Neals" went nuclear on a variety of subjects and about a variety of people — and now has spent the past day doing the predictable social media apology tour.

After copping to sleep deprivation and admitting that he "did a lot of celebrating this week," the actor, who like his sitcom character is gay, gave an expletive-fueled interview. Asked about how he deals with kids who reach out to him, he replied, "I've got struggles of my own. I don't have time to be your f__king soothsayer." He also spoke of being passed over for a straight role for being "too gay," saying, "It was horrible. It made me feel so sh__y." But where he really let it rip was on the subject of some very specific other men in his industry, starting with "Arrow" co-star Colton Haynes, who Galvin swiftly dismissed as "the worst."

Earlier this year, Haynes addressed rumors of his "secret gay past" with a genial, "Was it a secret? Let’s all just enjoy life & have no regrets." And in a profile for last month's EW, Haynes acknowledged that early in his career, he avoided directly discussing his sexuality, saying, "I didn’t feel like I owed anyone anything. I think in due time, everyone has to make those decisions when they’re ready, and I wasn’t yet." But he added that now, "I’m happier than I’ve ever been, and healthier than I’ve ever been, and that’s what I care about." Galvin apparently felt this method of disclosure was insufficient, declaring to Vulture, "That's not coming out. That's f__king p___y bulls__t. That's like, enough people assume that I sleep with men, so I'm just going to slightly confirm the fact that I've sucked a d__k or two. That's not doing anything for the little gays but giving them more masturbation material."

Galvin then moved on to the subject of Eric Stonestreet, a straight actor whose portrayal of a gay character on "Modern Family" has garnered him two Emmy awards. Speaking of his own character on "The Real O'Neals," Galvin said, "I don't want Kenny to just be the Eric Stonestreet. I want him to be a person. I want him to have levels to him. A lot of portrayals of gays on television don't allow for that…. I've thrown Eric Stonestreet under the bus a solid seven times this week. No, I think as wonderful of an actor as Eric Stonestreet is — I've never met him, I assume he's a wonderful guy — he's playing a caricature of a caricature of a stereotype of stereotype on 'Modern Family.' And he's a straight man in real life. And as hilarious as that character is, there's a lack of authenticity." Galvin, in contrast, is authentic enough to refer to a flirtatious young actor who guested on his show as a "f__king f____t."

But if you read the Vulture interview now, the most explosive part of the story is no longer there. Speaking about the Hollywood gay community, Galvin referenced director Bryan Singer, who two years ago was accused by a man named Michael Egan of sexually abusing him when he was a teen. The charges were later dropped, but rumors about Singer have endured. Galvin's remark about Singer is the kind that should have stopped an editor in her tracks, one that Singer should have at least had an opportunity to rebut. Little wonder that not long after that horse left the proverbial barn, Vulture decided to shut the door, scrubbing the comments and issuing a note that "This is a contentious issue, and after consideration, we decided to delete the reference." This is the Internet, though, and Galvin's explosive comments live on in aggregation.

Galvin himself has now issued a whopper of a mea culpa for his candor, calling his remarks about Singer "horrible" and a "serious lapse in judgment," and saying, "My comments were false and unwarranted. It was irresponsible and stupid of me to make those allegations against Bryan, and I deeply regret doing so. I have never been to Bryan’s house, and I admit there is no basis for any of the things I said or implied about Bryan in that interview." He added that "To Colton Haynes and to the LGBTQ youth, especially those who have embraced our show, I have no right to dictate how or when anybody comes out of the closet… I think Eric Stonestreet is a wonderful actor. I apologize to everyone that I’ve hurt with my comments and understand the damage that has been done."

On Thursday, Haynes took to Instagram to issue his own response, noting that "Only a month ago I was tweeting this kid and saying that he should win an Emmy for his work. Then today he returns the favor by calling me a p__sy and the worst to the entire world…. Enjoy all of your success. You're a young kid… hopefully you'll eventually learn a thing or two." He signed it "Colton P__sy Haynes."

In his statement, Galvin says that "I am new to this and will certainly commit to being more thoughtful and wiser as I navigate all of this moving forward," as if a full-grown adult being cavalier about accusing people of sexual abuse or being cruel about other people's choices is a result of "newness" and not straightforward meanness. But perhaps this experience really might become a lesson not in being more guarded in what he says, but more compassionate in how he judges. And as Haynes advises him, "Shouldn't we all be supporting each other?"