American cynicism is reaching a boiling point, and the corrupt electoral system is to blame

Fed up with politicians overall, Americans are not excited about either Trump or Hillary in the White House 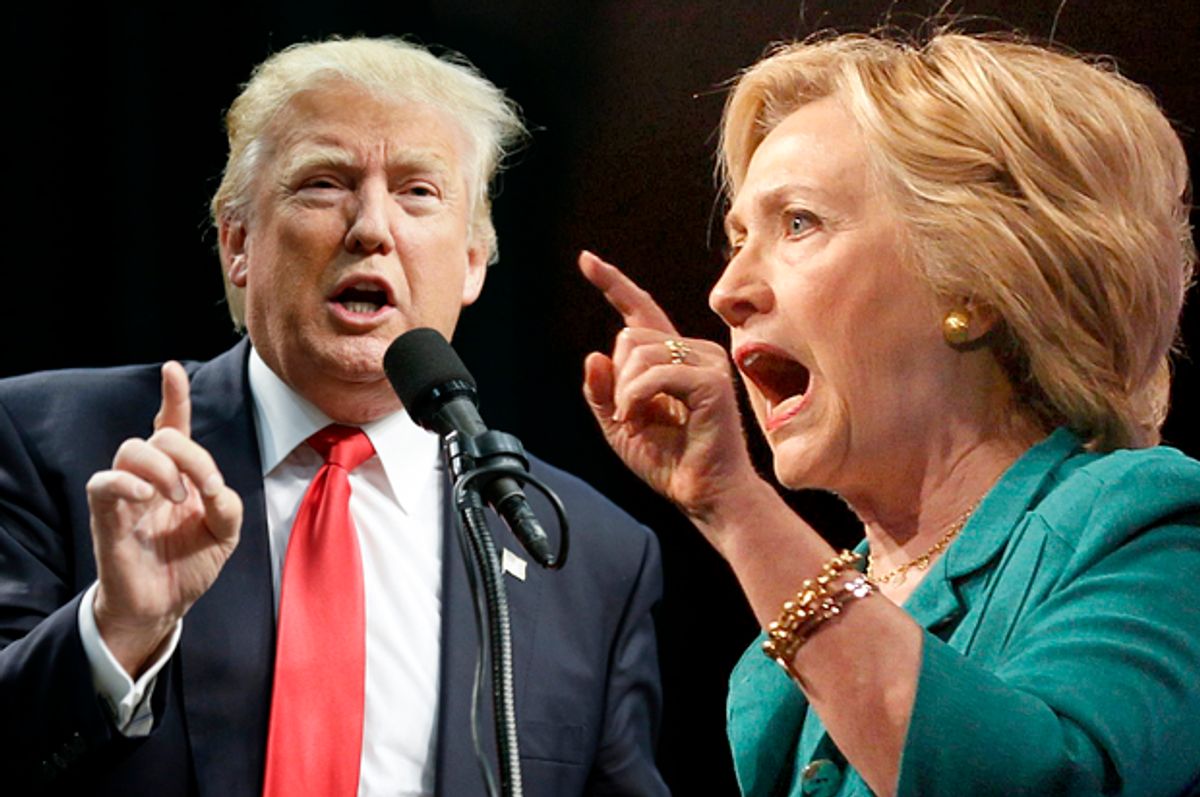 In a recent Quinnipiac University survey released earlier this month, a broad theme of distrust was found for both Donald Trump and Hillary Clinton among the general population. When it comes to notable policies that these presidential candidates have proposed over the past year or so, most Americans just don’t believe that either of them will try very hard in making them a reality once elected, or are simply too cynical about getting anything done in Washington these days.

According to the poll, only 24 percent of people believe that a President Trump “would be able to build a wall and have Mexico pay for it,” while just 19 percent think he would be able to deport 11 million undocumented immigrants (45 percent say that he would try but fail, 29 percent that he wouldn’t even try). On the other hand, most people assume that Clinton is completely full of it when it comes to popular policies like curbing the influence of Wall Street and eliminating money from politics. A 63 percent majority of voters believe Clinton wouldn’t even try to “remove secret money from politics,” while 56 percent say she wouldn’t try to rein in Wall Street (a paltry 15 percent say she would try and succeed).

The obvious take-away from this is that Americans are pretty damn cynical about politics and politicians. These polls (and others) seem to indicate very different public perceptions of the two candidates (neither very good): The majority of people think Trump is repulsive and oppose his policies, but also believe he is more sincere about them, while a majority of voters tend to be more supportive of policies that Clinton has been inclined to advocate — they just don’t believe she is at all genuine about them.

A March poll from Pew Research Center, for example, found that a majority of Americans oppose Trump’s plan to build a big beautiful wall at the Mexican border, while, according to a New York Times/CBS News poll from last year, an overwhelming majority of Americans believe money in politics is a serious problem that must be addressed.

This widespread cynicism certainly seems warranted. On one side you have an unhinged lunatic who promotes resentment and fear; on the other side you have a political chameleon who effortlessly changes positions when it suits her. And to top it all off, you have a bought-and-paid-for Congress that obstructs common-sense policies supported by the majority of Americans because lobbyists and big donors don’t approve.

The source of all this dysfunction and corruption isn’t a great mystery. In the aforementioned Times/CBS News survey, the majority of respondents say that we need to “completely rebuild” the “system for funding political campaigns,” or at the very least there need to be “fundamental changes.” Moreover, 77 percent of respondents support “limiting the amount of money individuals can contribute to political campaigns,” and 78 percent support limiting the amount “groups not affiliated with a candidate” (i.e., super PACs) can spend.

Americans seem quite conscious of how money corrupts the process, and agree that reform is paramount — but political corruption goes beyond private money. The 2016 presidential election is shaping up to be a “lesser of two evils” battle for the ages. Trump and Clinton are the most disliked presidential candidates in modern history (for reasons noted above) — and yet, if anyone on the left or right even contemplates a third party run, they are ostracized and called things like “renegade Jew,” or they get accused of being fascist sympathizers. But while third parties face untold vitriol from partisan Democrats and Republicans, it is ultimately the system that truly hinders political outsiders and independents.

The United States is a political duopoly, meaning the state and political apparatus is controlled entirely by two major parties. What makes this duopoly especially pernicious is the fact that the parties are a lot more alike than their members or leaders would ever care to admit. While Republicans and Democrats distinguish themselves with cultural issues, and tend to make mountains out of molehills to exaggerate trivial disagreements, they remain very similar on questions of economic and foreign policy.

The two-party system is partly a result of the winner-take-all electoral system, which could be ameliorated with various reforms, including instant-runoff voting and proportional representation (the former would eliminate the “spoiler effect” in national elections). But as Micah L. Sifry explains in the New York Times, the parties have worked tirelessly over the years to thwart third party challenges and silence dissent: “Thanks to laws passed by Democrats and Republicans and upheld by the courts,” writes Sifry, “candidates of other parties face discriminatory ballot access and campaign financing hurdles, gerrymandering, exclusion from debates and media blackouts.”

Eliminating big money from politics is crucial if we hope to protect and strengthen democracy in America, but so is creating a system where third parties and independent candidates can compete and challenge establishment ideas found in both major parties. Just imagine how much more enlightening a presidential debate that included the Libertarian Party’s Gary Johnson, the Green Party’s Jill Stein, and an independent Bernie Sanders would be over a petty slugfest between just Trump and Clinton.

This won’t happen, of course; but collective cynicism and frustration seems to be reaching a boiling point. The 2016 presidential election will be a contest fueled by fear and resentment, and the distrusted Clinton will probably defeat Trump for the simple reason that he is an ignoramus with shockingly dangerous views. But how long will voters yield to the “lesser evil” party or candidate, and how long can the parties quell populist discontent?