The GOP nominee promises to put "America First." Isolationists, many Nazi sympathizers, said the same prior to WWII 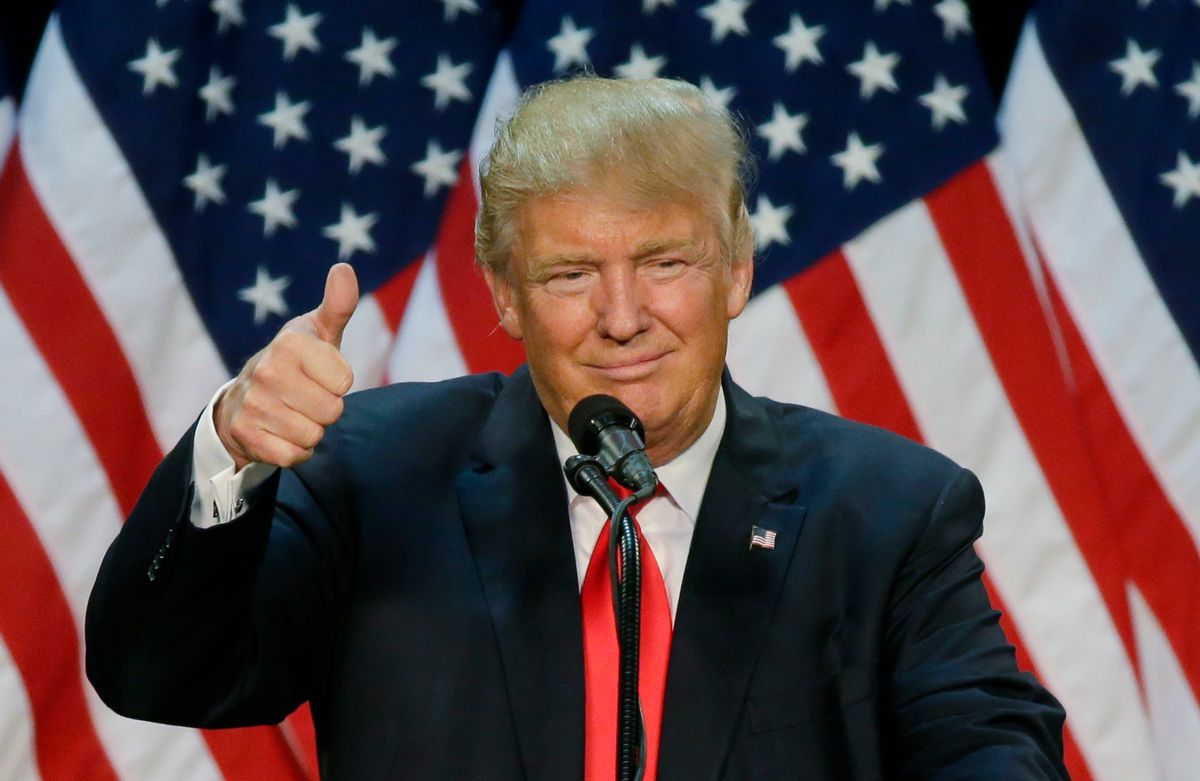 This piece originally appeared on The Conversation. It has been corrected since it first published.

In his June 7 primary night victory speech, Donald Trump surprised pundits by reading from a teleprompter. He also spent a good few minutes talking about his signature slogan, “America First.”

We love our country. We love our country. But we can turn this all around. We’re going to do it by putting America first. That commitment is the foundation for change that’s been missing and has been missing for a long time. It’s important to understand what “America first” means. It means on foreign policy, we will never enter into any conflict unless it makes us safer as a nation. It has to make us safer as a nation.

Trump first used this phrase in April, in his only – to date – major foreign policy speech.

Whatever you think of Trump’s interpretation of “America First,” what interests me as a historian is his use of this particular phrase to summarize his views.

Like so many other Trump pronouncements, this one proved instantly controversial.

The main reason in this instance was because “America First” has a past as well as a present.

It was in July 1940 that “America First” was chosen as a name by leading isolationists for an organization they created to lobby against American entry into World War II.

Headquartered in Chicago, the unofficial capital of the isolationist-oriented Midwest, the America First Committee possessed from the start a diverse membership.

What united these very different people was a strong sense that American entry into the first World War had been a mistake, and must not be repeated.

Instead they proposed the following four principles:

The principles proved persuasive. America First claimed 800,000 members, making it the largest antiwar organization in American history up to that point.

The ‘mistake’ of entering World War I

So why 22 years on, were America First supporters still opposed to American entry into World War I?

Their argument was that the war had produced a decisive victory for one side (the Allies) and a vindictive peace treaty for the losers, especially Germany. The result, they said, was continued animosity in Europe rather than lasting peace.

This was exactly what Woodrow Wilson had warned against in a 1917 speech to the U.S. Senate:

Victory would mean peace forced upon the loser, a victor’s terms imposed upon the vanquished. It would be accepted in humiliation, under duress, at an intolerable sacrifice.

This first part of America First’s thesis attracted considerable public support. By that point, many Americans who had supported entry into WWI had come to see that decision as a mistake, as historian Willian Leuchtenburg points out.

Indeed, the long-term consequences of American entry into World War I had proved to be disappointing. Instead of a “war to end all wars” as Woodrow Wilson had promised, World War I’s outcome had, by 1940, led directly to ever more anger, division and conflict in Europe.

German military aggression in the second half of the 1930s – and especially the invasions of Poland in August 1939 and France in May 1940 – were explicitly intended to undo the punitive peace treaty imposed on them after World War I.

Americans were also unhappy about the sacrifices the country had made on behalf of a war that had come to be described by many as “wasteful” and “futile.” Over 100,000 U.S. troops had lost their lives. The American government had spent an estimated US$32 billion or 52 percent of gross national product on waging the war.

The second part of America First’s argument was that the situation in Europe by 1940 was similar to that in 1917.

The fear, therefore, was that American entry into World War II would likely end either in the nation’s defeat by Nazi Germany (given Anglo-French military weakness at this time) or to another decisive victory by Britain, France, and the U.S., resulting in another punitive peace treaty and ever more animosity between the winners and losers in Europe.

These fears, however, proved much less persuasive with the general public. The crucial difference between 1917 and 1940 was the nature of the German government.

In World War I, Germany had possessed a normal European nation-state; not so in 1940. By then, organized political opposition in Germany had been crushed, and Jews had become the target of vicious anti-Semitic violence. The heavily militarized and authoritarian German state was deeply off-putting to most Americans.

More significant was the fact Hitler became in 1938 the greatest threatening force that the democratic, freedom-loving world faces today.

When France fell to the invading German armed forces in May-June 1940, the contrast with World War I became even clearer. In just six weeks, Hitler’s invading armies accomplished what World War I era German military forces failed to do despite four years of trying. By the time of the French government’s surrender on June 22, the prospect of a one-sided victory by the Nazi rogue state seemed likely unless the U.S. became more involved in aiding Britain.

By the fall of 1940, the debate over war in Europe had seriously affected the ongoing presidential election.

America Firsters favored GOP candidate and former businessman Wendell Willkie, who called incumbent President Franklin Roosevelt a warmonger who would, like Woodrow Wilson, drag the U.S. into a European war.

Anti-Semitism also became a factor here, with some America Firsters tending to think that the American Jewish community favored greater American involvement in the war for selfish reasons and that it was using Jewish community influence within the Roosevelt administration to bring that about.

Attacks on Roosevelt’s motives in particular became especially intense. Congressman Charles Curtis of Nebraska went so far as to assert that FDR’s actions stemmed from “a lust for power” that made him “a rival of Stalin, Hitler, and Mussolini.”

Interventionists responded by arguing that FDR was the candidate most likely to reduce the chance of a victory by Nazi Germany. Timely military aid to British Empire would keep its forces fighting. Large-scale military build-up would make sure that the U.S. could counter the new military technologies – most notably aviation, rocketry and submarines – from which the country could not isolate itself. The newly introduced military draft would enhance national security.

Roosevelt’s come-from-behind victory in November 1940 turned the tide against America First. Having trailed Willkie in the polls during the summer, Roosevelt moved ahead when the German air force began its bombing campaign against southern England in September. Continuing German military aggression helped persuade swing voters to stick with Roosevelt: he won 55 percent of the popular vote.

Roosevelt’s reelection led directly – despite America First’s continuing and vocal opposition – to passage of the Lend-Lease Act by Congress in March 1941. That measure authorized the president to extend military aid to the British and, once Nazi Germany invaded the Soviet Union in June 1941, to the Soviets as well.

With the Japanese military’s attack on Pearl Harbor in December of that year came American entry into World War II – and the abrupt disappearance of America First both as an organization and as a defensible perspective on national security issues.

What, then, are we to make of Donald Trump’s decision, 75 years later, to revive such a controversial slogan as “America First”?

One possibility is simply that Trump doesn’t know much about the history of the phrase and doesn’t intend for it to mean anything like what it did in 1940-41.

To Trump, “America First” seems to connote a foreign policy more protective of ordinary Americans: allies should bear more of the cost of protecting their national security; US forces should be deployed abroad less; American workers should be protected from low-wage foreign competition whether in the form of cheap imports or illegal immigrants.

But the fact is that whatever Trump’s intentions, the phrase “America First” has connotations that cannot be ignored.

America’s allies in Europe and elsewhere are mostly older nations accustomed to thinking in historical terms. To them, “America First” suggests a revived form of American isolationism (with respect to security and trade policies) or, even worse, anti-foreign sentiment in general.

As in 1940, the upcoming presidential election seems likely to decide the fate of “America First.”

If Trump wins, that phrase will likely acquire a new lease on life. If Hillary Clinton prevails, Trump’s “America First 2.0” seems likely to wind up as discredited as the first version ultimately was.

This piece originally appeared on The Conversation. It has been corrected since it first published.

Prof. David Stebenne is a specialist in modern American political and legal history, and the author of "Promised Land: How the Rise of the Middle Class Transformed America, 1929-1968," on sale now from Scribner.