Narcissist in chief: The danger of having Donald "Citizen" Trump in the White House 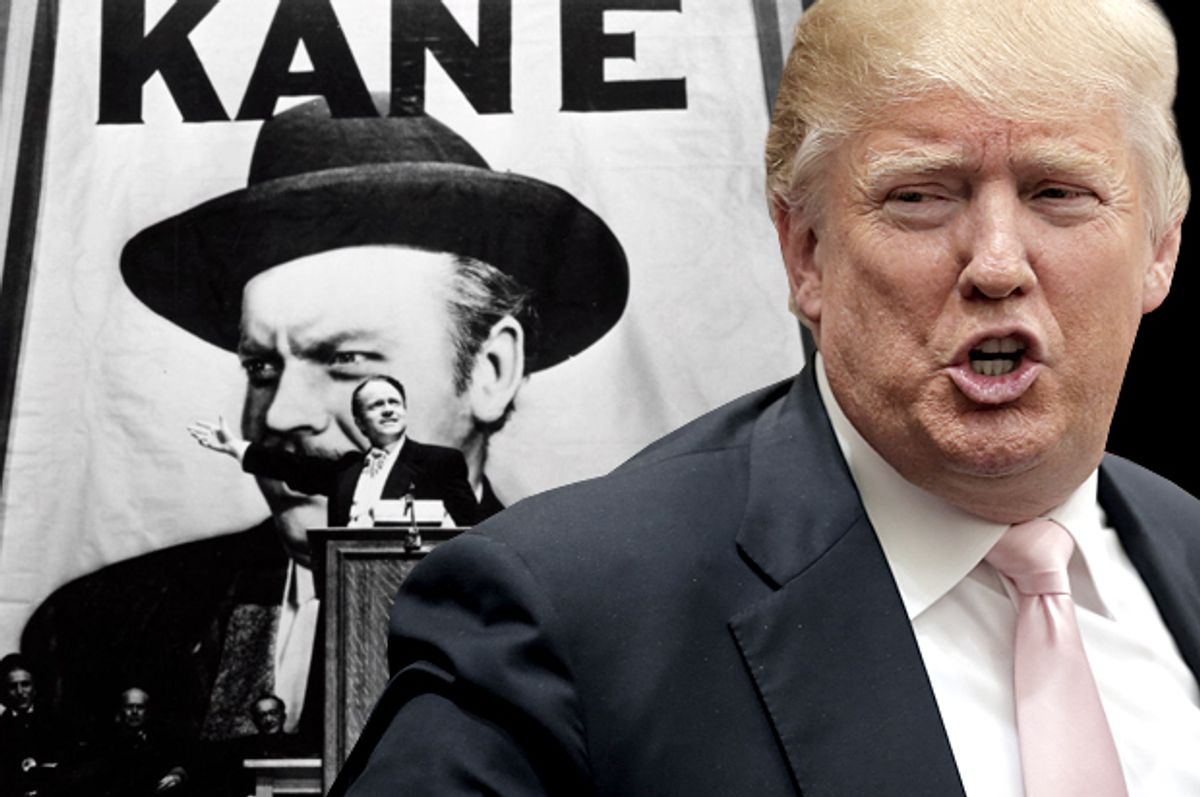 “I have to tell you,” per Trump’s verbal tics, “believe me, folks:” it’s a snap to link Citizen Trump, the most undisciplined, narcissistic politician in memory, with Charles Foster Kane, the impulsive, narcissistic target of satire in Orson Welles’ classic “Citizen Kane.” Equally propelled by huge inheritances, both yearn desperately for fame and adoration, presume limitless “genius” when trusting their flawless gut, and proclaim only their magic wands can save multitudes from greedy elitists. Of course, both figures are by and large fabrications, though the Kane character is smarter, funnier and more aware of irony. The unobservant Trump, whose tunnel vision seems filled with mirrors, adores the Kane figure and the movie.

In one of the film’s most dramatic moments, Kane is privately exposed as an adulterer (thus unelectable) when about to win his first public office (oddly foreshadowing the adulterous, ruthless Trump). The unapologetic villain, Boss Jim Gettys, offers Kane an image-saving exit (immediately withdraw) and then, shocked at the refusal, aptly quips, “If it was anybody else, I’d say what’s gonna happen to you would be a lesson to you. Only you’re going to need more than one lesson, and you’re gonna get more than one lesson.”

Yet modern research proves that fortress narcissists can’t and/or won’t learn from failure: they double down when thwarted, convinced the envious, inferior world is out to punish its special heroes. Corrective “lessons” are for losers, Trump might mumble. Buoyant narcissists resist all criticism, reducing slights to mean-spirited propaganda. Indeed, the potent narrative in “Citizen Kane” depicts what calamities accrue when the insular (anti) hero defies the fates (known also as outside reality) and dies unloved.

Never Having to Say You’re Sorry

That’s why Kane’s latter-day cousin refuses to apologize, nor likely understands his blunders, whether criticized by “crooked” opponents or his own savvy party professionals. Trump knows more than everyone else, more than all media pundits, and even the veteran operatives he hires, then ignores. Like Kane, becoming a “public servant” isn’t about doing good but amassing love, like one would amass dollars (thus Trump’s recent boast he’s becoming the most famous person in the world).

Thus, “lessons learned" is a false model for both figures, chins out with ferocious resistance to change. Wells’ satire dramatizes, with clinical glee, when fixation feeds on itself — like every classic Narcissus, who dies after falling in love with his own image of reflected beauty. This kind of moral and emotional flaw is not fixable by outside pressure. That leaves in a democracy only the healthier electorate to benefit from experience, to learn the hard truth that change for Main St. economic misery does not flow from the crude self-aggrandizement of billionaire Trumpery.

Thus, another event-packed week proves Trump is better at damaging presidential demeanor than fostering it. The routine “General Election lurch” would have released him from repeatedly proving what an ass he is. However, despite a primary victory, Trumpismo finds ways to plant unforced, disqualifying land mines, then doubles down in righteous indignation — so much for not learning the first "lesson" for any wannabe president. Let’s celebrate Trump's fiascos: they won’t change his twisted personality nearly as well as they broadcast unfitness for office.

Prize to the Least Objectionable?

If the race between Hillary and the Donald comes down to who’s least objectionable, Trump is giving away the game. That reinforces fervent hopes Trump's destiny is actually to serve as epic, disruptive force to our most regressive force: the Republican brand. No other GOP primary loser approaches Trump’s ability to damage the party, fast becoming the nightmare that unravels the reigning “vast, rightwing conspiracy.” Further, Trump is immunizing HC even against her worst fate, email indictment or Clinton Foundation shenanigans.

Time appears not to be on Trump’s side, with six months left to expose more unforced errors, inadvertently testing a novel theory: How many crushing blunders can a candidate commit before the flood of momentum goes against him? His transient uptick in polling after his media coronation is melting quickly as Republicans rush to indict racist comments. When centrists plus Sanders’ fans inevitably come on board, HC’s rising numbers should define Trump's vulnerability.

Just like Kane’s painfully tragic failures to elevate his wife, a mediocre singer, as a grand opera star, Trump is still treating outside reality that offends him like another primary rival, that is, with name-calling. It won’t surprise me when he starts berating critical Republicans, blaming their reduced support for his falling off Trump Towers. Will more of Trump’s perverse “charm offensive” reduce the 70 percent of women or 80 percent of Hispanics aghast he’s even a national nominee? The most delicious suspense remaining may well be when — not if — Trump crosses the line to unelectability (if he hasn’t already). Then, against all of the Democratic king’s men — and many women, including one at the top spot, flush with funds — Trump may well descend into a national joke.

Citizen Kane’s story depicts how unimpeded narcissism drives him to cruel pressure that victimizes his pathetic wife. In the process he alienates his best friend, the only one able to speak truth to power. Bankruptcy (more echoes of Trump) tracks the fall and, stripped of his newspaper empire, Kane dies in isolation, encircled by his empty palace, symbolically filled with life's unopened, unexplored treasures. The famous Rosebud finale dramatizes the irony of Kane’s horridly mistaken quest, seeking the wrong ends with self-defeating means.Without so much money, he muses at one point, he might have been a great man.

On the precipice, Trump is still the happier warrior, corralling yes-men who cater to his egotism. He is more agile, but less scrupulous after disasters than Kane, not above brandishing his name on Trump U., steaks, or gilded hotels. Kane in part confronts his core contradiction: You can’t make people love you, a “lesson” the Trumpster has yet to learn. Trump’s formal nomination will only feed an ego barely in control, adding to delusions of invincibility, a shoo-in against any “crooked” or disgusting (mere woman) opponent.

Studying only public behavior since last Fall, I view the Trumpster as a one-trick pony whose silver bullets were expended in the bizarro GOP primary. For how long will his third-grade schtick cover his micron-thin skin? When the public realizes the utter policy void, will not the true Trump emerge: a nasty egotist so in love with himself that the outside world, when withholding adoration, could well morph into his personal enemy? Just like the fantasized “hater,” Judge Curiel.

If nothing changes, we could eventually have a national uproar, crowning what wimpy Republicans failed to pull off: Never Trump. This tycoon, alleging absolute competence across all skill-sets, doesn't even have a coherent national campaign yet. How many in the end will welcome a tiresome, self-promoting bully in our living rooms for four years? Despite the blather, Trump is no change agent, unwilling to adapt his personality flaws, dirty tricks, or belligerence.

Ultimately, the only revelation that matters comes down to centrists in 10 key states. And then, only one increasingly obvious lesson is necessary: that electing a defective, entrenched billionaire, glorifying money as everything, will not confront the greatest threat to this nation: the hegemony of crony capitalism. Nor will Trump change related outcomes: inequality, calculated gridlock, Citizens United and resistance to face inexorable climate change. All else is noise.