Don't call it a win for women: Hillary's victory is a triumph for the women's movement, and there's a difference

The first female presidential candidate is long overdue, but Clinton isn't worth celebrating any more than Thatcher 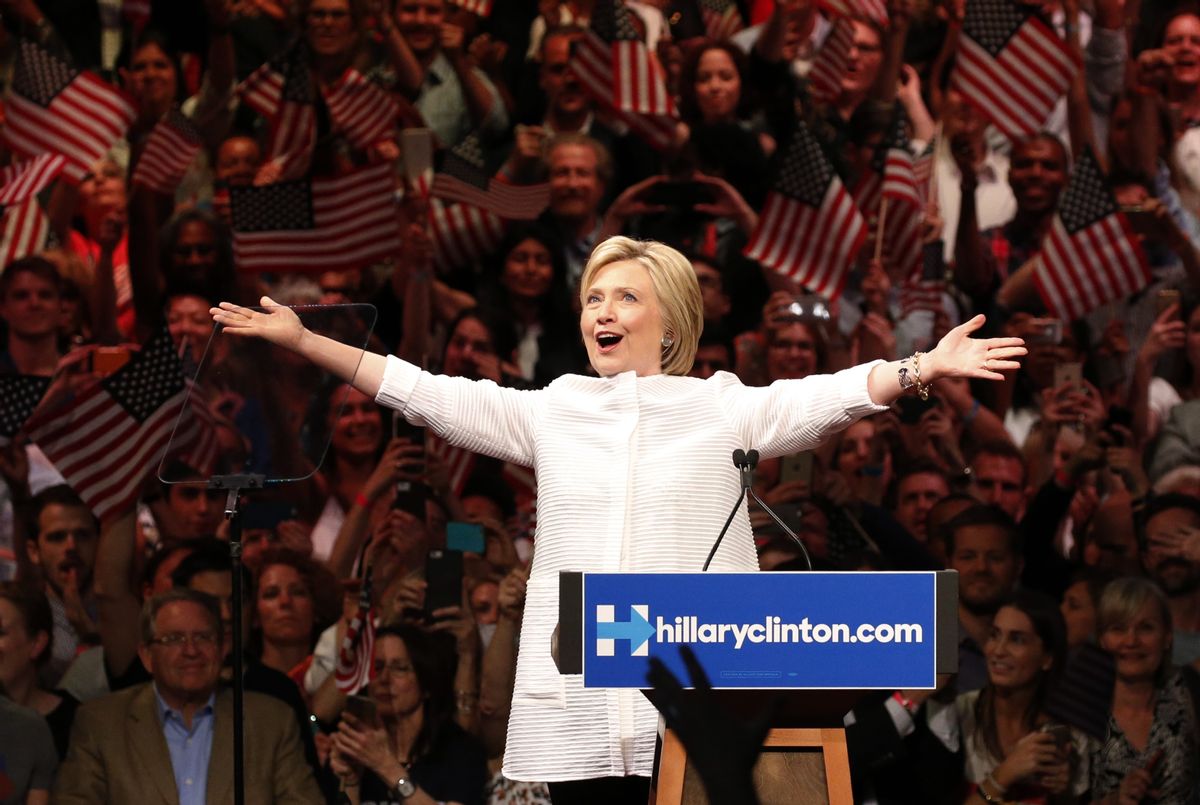 Tuesday was a historic day. For the first time in history, a woman will — barring some major shift — become the presidential nominee for a major American political party.

“Tonight’s victory is not about one person,” Clinton declared in a speech at the Brooklyn Navy Yard later that night. “It belongs to generations of women and men who struggled and sacrificed and made this moment possible.”

Clinton situated her nomination in the context of the movement for women’s rights, noting that her mother, Dorothy Rodham, was born on June 4, 1919 — the same day that Congress passed the 19th amendment that gave them the right to vote. (Although, thanks to largely race-based restrictions and widespread voter suppression, many women were denied suffrage for years after that.) “In our country it started right here in New York [in] a place called Seneca Falls in 1848, when a small, but determined group of women and men came together with the idea that women deserve equal rights,” she said. History has been made and glass ceilings have been broken.

It’s true. Women have been all but locked out of the United States’ highest office for decades, and Clinton herself has faced a barrage of sexist attacks since long before her campaign began. That she is now a legitimate contender for the Oval Office is an unambiguous testament to the power of feminist movements throughout this country’s history, from those who came together in Seneca Falls to the women who’ve fought back against toxic birth control and forced sterilization this last half-century. Those who fought for these victories changed the political weather, and stripped away the idea that women are unfit for either high office or basic dignity.

Many of the women who made Tuesday’s historic night possible also might not see her as a feminist champion. Alice Paul — founder of the National Woman’s Party, or NWP — was one of the key drivers behind both the 19th Amendment and, later, the Equal Rights Act. A Quaker, Paul was as committed to pacifism as she was to nonviolent direct action. She first became interested in the suffrage fight while studying in Britain, where she met and joined forces with the militant Pankhurst sisters and their Women’s Social and Political Union. In her time fighting for the vote there, she admitted to “personally breaking more than 48 windows and being arrested and imprisoned on several occasions” — a tactic she would later abandon.

After joining the suffrage movement back in the states, Paul split with the country’s then-premier suffrage organization, the National Association for Women’s Suffrage, over its incremental approach and insistence on pursuing change through lobbying, referenda and other designated routes. She instead set out to “punish the party in power” — then the Democrats — and shift public opinion against Woodrow Wilson on the issue of women’s equality. In the 1914, the NWP ran campaigns against Democrats as an independent political party.

To achieve women’s suffrage, Paul’s NWP opted for massive marches and boundary-pushing demonstrations. Long before picketing at the gates of the White House was commonplace, NWP held over 1,000 “Silent Sentinels” outside its gates, eventually facing arrest and imprisonment. Paul went to jail for seven months in one stint at the Occonquan Workhouse. Going on hunger strike while inside she was subjected to solitary confinement and forced feedings.

Paul and Clinton would disagree on foreign policy as much as they would about theories of change. Clinton has a long history of supporting expansions of the U.S. military, from the invasion of Iraq to coups of democratically elected governments to the drone program. Against advice and all standards of respectability at the time, Paul and the NWP chose to continue picketing a wartime president, opposing both the war and asking how “Kaiser Wilson” could ask men to die for democracy abroad as he denied women the vote at home.

According to one NWP document from 1919, “On the day of the draft day parade in Washington 16 [suffragettes] went forth — in pairs — to stand before the White House with their bannered sentiments: ‘It is unjust to deny women a voice in the government when the government is conscripting their sons.”

In the streets and in the jails, women faced reactionary violence, which picked up aggressively after the start of World War I. At the White House gates, women were pelted with rocks and trash before being dragged off by police. In one  “Night of Terror,” the Occonquan superintendant gave the green light to 40 guards to beat and torture suffragettes.

Paul’s effort to polarize the fight for women’s right to vote runs counter to Clinton’s calculated realpolitik. While Paul would likely celebrate her nomination, it’s hard to imagine her mustering much enthusiasm for Clinton’s candidacy. “I think if we get freedom for women,” she once said, “then they are probably going to do a lot of things that I wish they wouldn’t do.”

As many have pointed out, too, Clinton would not be the first woman to run a major global north country. Angela Merkel has been the chancellor of Germany since 2005. And Margaret Thatcher, of course, broke the glass ceiling at 10 Downing Street when she was elected prime minister in 1979. Each have driven brutal austerity agendas that left women worse off — Merkel in Greece and Thatcher in her own backyard.

“For a woman to occupy that office is a tremendous moment in the country’s history,”one NBC correspondent remarked, as Thatcher took office. “Britain may have entered a new era today. Not just because the prime minister is a woman, but because of the strong conservative policies she intends to push.”

The neoliberal orthodoxy Thatcher pioneered has had a devastating effect on women worldwide. In the global north, shrinking welfare states leave working mothers without access to either basic social services or common sense policies like paid family leave. The free market fundamentalism Thatcher and Ronald Reagan both evangelized lingers on, no less so than in Britain and this country’s starved social safety net. A study last summer committed by the United Kingdom’s Labour party found that of the more than $13 billion cut from families in the Conservatives’ 2015 budget $10 billion would come directly from women.

Cuts to services like the National Health Service and the wholesale privatization of healthcare in this country have annihilated reproductive health services and made care work — the vast majority of it done by women — both more painstaking and expensive.

In 1985, Thatcher helped cement her legacy by breaking the National Union of Mineworkers’ massive national strike, setting a troubling new normal for labor relations on both sides of the Atlantic. Now public sector unions in healthcare and education, securing job security and better wages for millions of women, are on the defensive thanks to shrinking budgets and anti-union dogma.

The situation is even more bleak in the global south, where free trade deals have opened the door for a race to the bottom in terms of wages, working conditions and regulations. Some 90 percent of sweatshop employees are women, many of them making less than a few dozen cents an hour under grueling conditions.

Years later, Bill Clinton would pick up Thatcher’s legacy, keeping his word to “end welfare as we know” it and championing disastrous trade deals like NAFTA. In Davos, after its passage, Hillary Clinton thanked business for lobbying for the agreement, while chiding them for not giving her husband fast-track authority to implement it sooner. Later, as Secretary of State, she called the Trans-Pacific Partnership the “gold standard in trade agreements” while lobbying for it. (She later abandoned her support for both under public pressure.)

The point here is simple: Women can back policies that are bad for women, even if the fact that they are in office at all is a win for women’s movements. Thatcher’s victory made life harder for millions of women. If her career has been any indication, Clinton won’t do any better by women simply by virtue of being one.