Trump delivered one of his most incoherent speeches on Monday: "We need to tell the truth about Radical Islam" 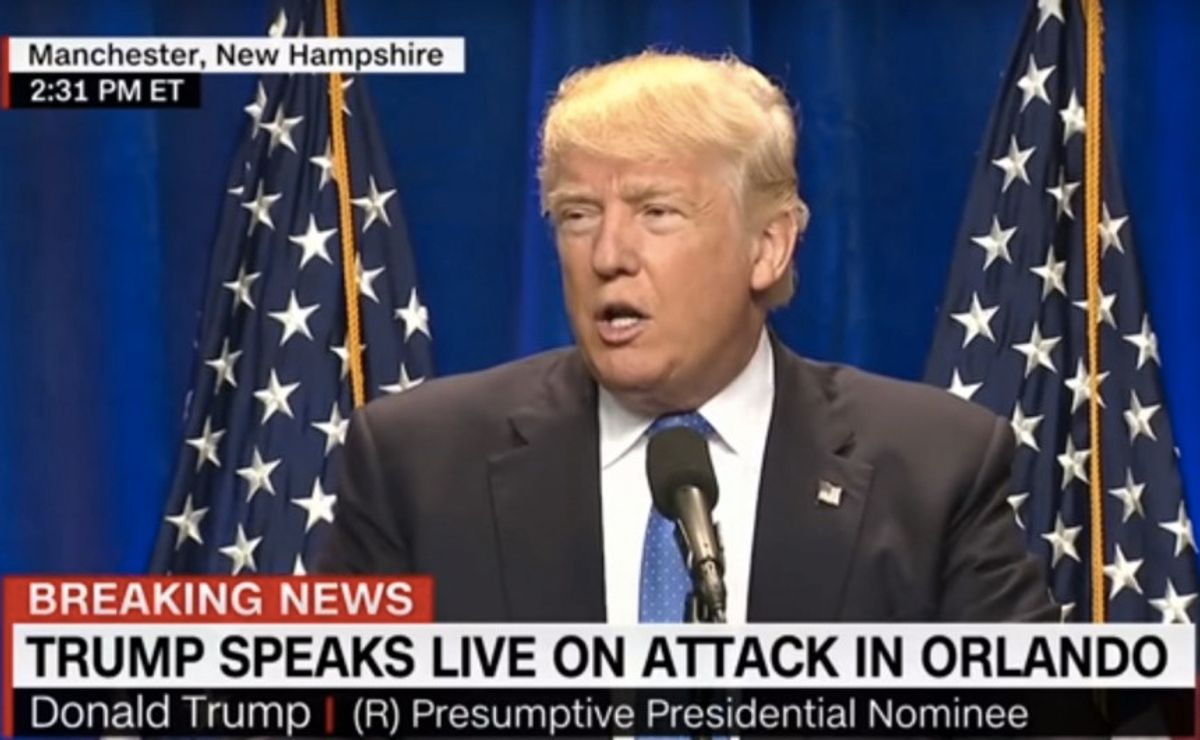 Donald Trump delivered an anti-terror speech on Monday, condemning the U.S. immigration system for the terror attack on a gay nightclub in Orlando over the weekend and vowing to prevent future acts of terror on U.S. soil by unconstitutionally restricting further immigration on the basis of religion. Trump's scripted, yet incoherent, speech was so off-the-rails it even provoked widespread criticism and mockery from conservatives.

"The bottom line is that the only reason the killer was in America in the first place was because we allowed his family to come here," Trump said at a rally in New Hampshire, after seemingly lying (or misspeaking) about the gunmen's birthplace.

"That is a fact and a fact we need to talk about," Trump said, repeating his attacks on President Obama and Hillary Clinton for not more forcefully condemning "Radical Islam."

"Her plan is to disarm law-abiding Americans, abolishing the 2nd amendment. and leaving only the bad guys and terrorists with guns," Trump said of Clinton. "She wants to take away Americans’ guns, then admit the very people who want to slaughter us."

Trump said that, "When I'm elected, I will suspend immigration from areas of the world where there is a proven history of terrorism against the United States, Europe or our allies until we fully understand how to end these threats."

Needless to say, Trump's insanity was apparently too tone-deaf for even some Republicans to handle.

And some Republicans reportedly complained of Trump's focus on the fact the Pulse nightclub victims were from the LGBT community:

On CNN, however, Trump's speech was treated like a serious policy  speech worthy of analysis and apparently full of substantive points.

Carl Bernstein told CNN's Brooke Baldwin that "despite his almost neo-fascist rhetoric," Trump's speech was "effective" in pointing out that liberals have not forcefully enough called out Muslim-Americans for failing to condemn terror attacks in the name of their religion.

CNN's Dana Bash noted that Trump sounded markedly more liberal in his direct acknowledgement that the attack on Pulse nightclub was an attack on the LGBT community specifically than other prominent Republicans. While CNN's David Gergen argued that Trump's speech will prove persuasive to Trump's base.