Fear, racism, and hatred: Why the gun industry makes so much money off mass shootings 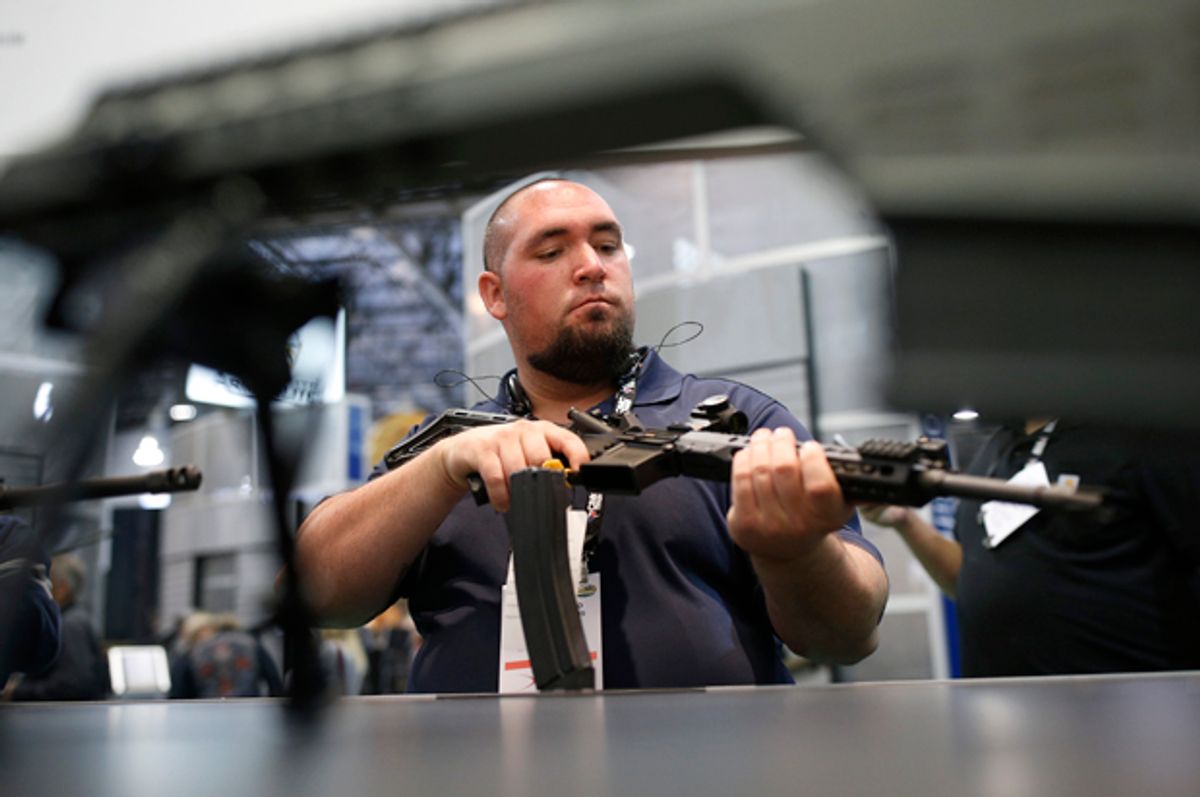 Even though the mass shooting in Orlando over the weekend is the largest in our nation's history, the fallout is following a standard pattern, a narrative so well-worn that it's impossible not to become numb to it: Liberals call for gun control, conservatives act like you are trying to take away their precious babies, nothing gets done, everyone eventually drifts away until the next horrible mass shooting.

Oh yeah, and the gun industry makes an absolute mint.

I wrote about this after the San Bernardino shooting, and I really don't want to sound like a broken record, but really, the problem here is that mass murder is, itself, a broken record: The crying parents, the frantic phone calls, the deadening realization that there is no body count high enough to get any movement on the issue of gun control in this country.

The gun lobby has ever reason to dig its heels in harder against gun control after a mass shooting, because high profile mass murder is a big driver of sales and profits for the gun industry. This shooting was no different. While sales numbers aren't in yet, as soon as the stock market opened Monday, gun manufacturers saw a spike in stock prices.

Getting sick of seeing this pic.twitter.com/vuCePJ3PZJ

And lest there is any doubt about whether or not gun manufacturers themselves are aware of the correlation, rest assured, they are. Michael Fifer, the CEO of Ruger, sent a letter to shareholders a month ago laying out clearly how much the industry looks to mass shootings for profitability.

"As I write this letter, there are some early, anecdotal hints that the spike in demand might be easing and the normal seasonal pattern of demand might be taking hold," he continued. "It is, however, an election year and the rhetoric from both sides is likely to continue, keeping consumers aware and thinking about their firearms rights."

So yeah. All this screaming and hollering about the libs coming for your guns and posturing about "gun rights" is, at the end of the day, a sales tactic to separate some fools from their money.

It's a vicious cycle. Every time there's a mass shooting, there's a surge in sales in guns and ammo, coupled with even more pressure from conservatives on their legislators to make it easier to buy guns. That means more guns and more fetishizing of guns, all of which just encourages more men with rage and masculinity issues to unload their guns into the bodies of family members, coworkers, or, in the most high profile cases, a bunch of random strangers. That's why we have had 133 mass shootings in this year alone.

There's reason to worry that this latest shooting may be even worse than most in terms of spurring pro-gun enthusiasm and gun sales.

"After accounting for all explanatory variables, logistic regressions found that for each 1 point increase in symbolic racism there was a 50% increase in the odds of having a gun at home," the researchers found.

("Symbolic racism" is social scientist speak for people who deny that they are racists, but still hold biased beliefs, such as believing black people are more violent or lazy than white people.)

The results suggest that the belief that people of color present a threat to one's safety increases interest, among white people at least, in owning a gun. This particular study was looking at anti-black racism specifically, but common sense would suggest that holding similar views about Muslim Americans — that they are violent or dangerous — would also increase interest amongst white, conservative crowds in buying guns.

And the gun industry has a friend in Donald Trump, who chose Monday afternoon to set loose a bone-chillingly racist diatribe, painting the entire Muslim world as somehow complicit in terrorism and blaming immigration for this recent shooting, even though the shooter was born in the United States.

Fear, racism and anti-liberal sentiment translates directly into gun sales. Fear, racism, and anti-liberal sentiment are the defining traits of the Donald Trump brand. The entire narrative of his campaign is that Hispanics/Muslims/African-Americans are out to get you, liberals are too "politically correct" to do anything about it, and so be very afraid. He's a walking advertisement for the gun industry, stoking the fear that moves weapons every time his sorry mug goes on TV.

People like Trump like to strut around like they are doing something to fight gun violence, but of course, all they do is stoke it. They stoke it by encouraging the fear that leads directly to more guns on the street. They stoke it by valorizing the politics of domination and toxic masculinity. And when that toxic brew boils over into more violence, it just becomes more fuel for the fire: More guns, more chest-banging, more violence. Something has to give, because this vicious cycle is spiraling out of control.