Saudi Arabia bans homosexuality. Its extreme Wahhabi state ideology is very similar to that of ISIS and al-Qaeda 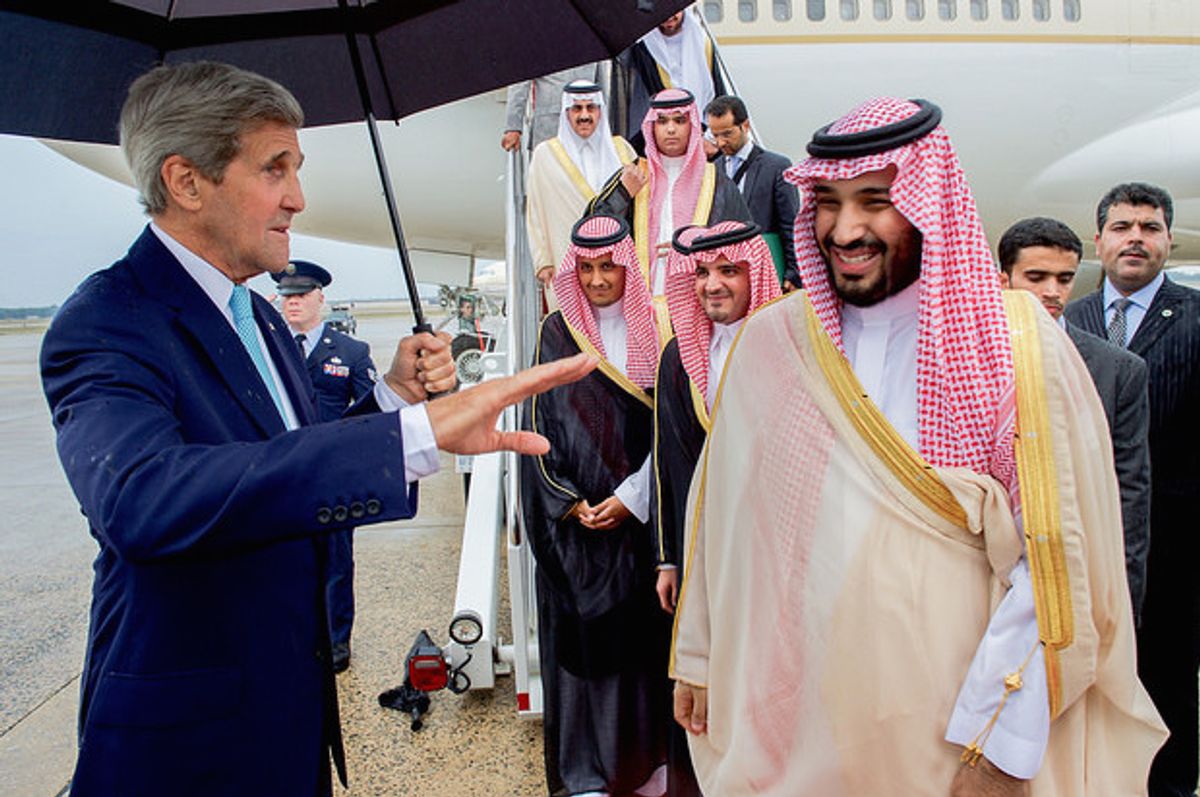 The U.S. secretary of state and the deputy crown prince of the Saudi monarchy pledged to "fight" the kind of extremism that led to the massacre of 49 people at a gay nightclub in Orlando, Florida on Sunday, June 12, while LGBT people in Saudi Arabia potentially face execution for their sexual orientation.

Kerry and Mohammed bin Salman also "discussed this weekend's shooting in Orlando and expressed their shared commitment to continue their cooperation in combatting the spread of violent extremism, both regionally and internationally," the State Department added.

Yet the kind of extremism that led shooter Omar Tareen to kill 49 people and injure another 53 is institutionalized in the theocratic Saudi absolute monarchy.

In Saudi Arabia, LGBT people have been beheaded in public because of their sexuality. All sex outside of marriage is illegal, and married Saudi men engaging in sodomy or non-Muslims who commit sodomy with a Muslim can potentially be stoned to death.

"Under sharia as interpreted in the country, consensual same-sex sexual conduct is punishable by death or flogging," the State Department's Bureau of Democracy, Human Rights and Labor wrote in its 2015 report on human rights practices in Saudi Arabia.

"Due to social conventions and potential persecution, lesbian, gay, bisexual, transgender, and intersex (LGBTI) organizations did not operate openly, nor were there gay rights advocacy events of any kind," the report continued.

"There were reports of official societal discrimination, physical violence, and harassment based on sexual orientation or gender identity in employment, housing, statelessness, access to education, or health care." It added: "There were no government efforts to address potential discrimination."

It is illegal for men "to behave like women" in Saudi Arabia, the State Department said. "Sexual orientation and gender identity could constitute the basis for harassment, blackmail, or other actions."

In Saudi Arabia and other Western-allied, oil-rich Gulf regimes, an extreme interpretation of Islam known as Wahhabism is the law of the land. This religious fundamentalism is very similar to the kind preached by extremist groups including al-Qaeda and ISIS.

In fact, scholar William McCants notes in his book "The ISIS Apocalypse" that, when ISIS needed textbooks for children in the Syrian city of Raqqa, "it printed out copies of Saudi state textbooks found online."

The Saudi regime has spent more than $100 billion in the past three decades exporting its extreme Wahhabism throughout the world, funding schools, mosques and charities primarily in poor Muslim-majority countries. This has led analysts to dub it the “fountainhead of Islamist terrorism.”

According to the FBI, Orlando shooter Omar Tareen expressed support for both al-Qaeda and ISIS, although the two extremist groups are fighting each other.

While ISIS is throwing LGBT people off of the roofs of buildings, Saudi Arabia and other Wahhabi Gulf regimes are discriminating against them in every facet of society.

Amnesty International condemned Saudi Arabia's "horrific" 2009 public beheading and crucifixion of a man who had previously been punished for "homosexual intercourse" and "possession of sexually explicit materials." He was sentenced to death and crucifixion for the alleged abduction and murder of a father and son, but Amnesty reported that "trial proceedings in Saudi Arabia fall way short of international fair trial standards."

Saudi trials "usually take place behind closed doors without adequate legal representation," the human rights organization noted. It added, "Convictions are often made on the basis of 'confessions' obtained under duress, including torture."

The draconian Saudi religious police, the Commission for the Promotion of Virtue and Prevention of Vice, were ordered in 2012 to enforce a ban on gay and “tom boy” students in schools and universities.

Western-allied Gulf regimes subsequently announced in 2013 that they were considering  conducting tests to “detect” LGBT people who were traveling to their countries in order to deny them entry.

In June 2015, the Saudi Ministry of Interior condemned a resolution on LGBTI rights at the U.N. Human Rights Council and rejected "international interference in its internal affairs," the U.S. State Department human rights report recalled.

That same month, Saudi authorities raided two LGBT parties in the city of Jeddah and arrested several people. Such raids are common. In 2005, the religious police raided a party and arrested dozens of Saudi men caught dancing and "behaving like women." They were sentenced to a total of 14,200 lashes and up to two years in jail, after a secret trial without defense lawyers.

Ali Ahmad Asseri, a gay Saudi diplomat serving in the U.S., applied for asylum in 2010 because he said his life would be in danger if he was forced to return to his country.

Asseri told news outlets Saudi officials refused to renew his passport, revoked his health benefits and fired him from the consulate in Los Angeles when they learned he is gay.

"My life is in a great danger here, and if I go back to Saudi Arabia they will kill me openly in broad daylight," he warned.

In 2014, a gay Saudi man was sentenced to three years in jail and 450 lashes after he was caught using Twitter to arrange dates with other men. An undercover officer from the Saudi religious police posed as a gay suitor and entrapped the 24-year-old man.

In July of last year, the Saudi regime fined an international school $25,000 for painting rainbows on its building, which it derisively called "emblems of homosexuality."

As for the State Department's claim that Saudi Arabia is committed to "countering terrorism" and "combatting the spread of violent extremism, both regionally and internationally," the theocratic absolute monarchy's record is mixed at best.

In its 2015 report on terrorism, the U.S. State Department insists "the Saudi Arabian government continued to build and augment its capacity to counter terrorism and violent extremist ideologies." It notes that the Saudi regime faces threats from both ISIS and al-Qaeda.

Yet, despite Saudi Arabia's putative commitments to fighting extremism, the State Department also admits in its 2015 report that "individuals and entities in Saudi Arabia continued to serve as sources of financial support for Sunni-based extremist groups, particularly regional al-Qa’ida affiliates such as the Nusrah Front."

This is consistent with earlier classified reports from the State Department. As Salon has previously reported, a classified 2009 memo signed by then-Secretary of State Hillary Clinton admitted, “Donors in Saudi Arabia constitute the most significant source of funding to Sunni terrorist groups worldwide.”

“Saudi Arabia remains a critical financial support base for al-Qa’ida, the Taliban, LeT, and other terrorist groups,” noted the government cable, which was released by whistle-blowing journalism organization WikiLeaks. (LeT refers to Lashkar-e-Taiba, an extremist group based in South Asia that has its origins in U.S., Saudi and Pakistani support for Islamists in Afghanistan in their war against the Soviet Union in the 1980s.)

“It has been an ongoing challenge to persuade Saudi officials to treat terrorist financing emanating from Saudi Arabia as a strategic priority,” the State Department added.

In the years since, the U.S. says the Saudi monarchy has tried to do more to combat extremism. In 2015, Saudi Arabia agreed to lead a coalition of 34 Muslim-majority nations ostensibly committed to fighting terrorism "all its forms and manifestations, whatever their sources and justifications," as the U.S. State Department puts it.

Saudi Arabia is also a member of the Middle East and North Africa Financial Action Task Force, which is purportedly committed to "disrupting terrorism finance," and it co-leads the Counter-ISIL Finance Group with the U.S. and Italy.

"The Saudi government took a zero-tolerance stance on ISIL, condemning its activities and participating in coalition military action to defeat the group in Syria and Iraq," the State Department maintains in its 2015 report on terrorism.

Yet, in 2014, U.S. and NATO officials reported that ISIS and Syrian al-Qaeda affiliate al-Nusra were being funded by wealthy "angel investors" in Gulf regimes. Qatar was doing even less to stop the flow of money than Saudi Arabia, the officials said.

In Syria, the State Department says Saudi Arabia is "offering to host a train and equip program for the moderate Syrian opposition," but the Saudi regime is still supporting hard-line Salafi Islamist groups that are similar ideologically to and have worked with al-Qaeda.

The U.S. State Department notes that Saudi Arabia has punished individuals and entities in its country that have supported the Shia militia Hezbollah, but concedes that Saudi donors continue to finance extremist Sunni groups that are responsible for sectarian massacres of religious minorities like Shia Muslims.

Later in the report, in its section on U.S.-designated terrorist organizations, the State Department says wealthy donors from Saudi Arabia are some of the largest contributors to the South Asian Sunni extremist group Lashkar-e-Jhangvi. It also highlights that "donations from external Gulf-based donors" support al-Nusra, other al-Qaeda affiliates and the extremist Haqqani Network.

"Recent regional turmoil and a sophisticated use of social media have facilitated charities outside of Saudi Arabia with ties to violent extremists to solicit donations from Saudi donors," the report said.

The European Parliament similarly stated, in a 2013 report, “countries like Saudi Arabia, Qatar, United Arab Emirates and Kuwait do too little to stop rich and conservative donors from financing terrorist organisations through charitable and religious institutions.”

“Saudi Arabia has been a major source of financing to rebel and terrorist organisations since the 1970s,” the European Parliament report added.

Yet these Saudi public awareness campaigns, the State Department admits, involve the regime "reinforcing" the very same form of Wahhabi extremism that is ideologically similar to that of al-Qaeda and ISIS.

"Some of these efforts involved seminars that refuted violent Islamist extremist interpretation and ideology. Public awareness campaigns were aimed at reinforcing the values of the state’s Wahhabi interpretation of the Islamic faith and educating Saudi citizens about the dangers of violent extremism," the State Department wrote.

The U.S. terrorism report adds that some Saudi "textbooks containing derogatory and intolerant references to Shia and non-Muslims remained in circulation." It furthermore reported that "privately-funded satellite television stations in the Kingdom continued to espouse sectarian hatred and intolerance."

Despite these acknowledgements, the State Department insists, "The United States and Saudi Arabia have a strong bilateral relationship."

In their dinner on Monday, June 13, Sec. Kerry and Prince Mohammed bin Salman also discussed the Saudi regime’s "plans to transform its economy through its National Transformation Program." This plan still will not give equal rights to women, who are systematically discriminated against throughout Saudi society and are treated as second-class citizens.