Conan's monologue also resonates, but with sincerity and conviction: "It’s time to grow up and figure this out" 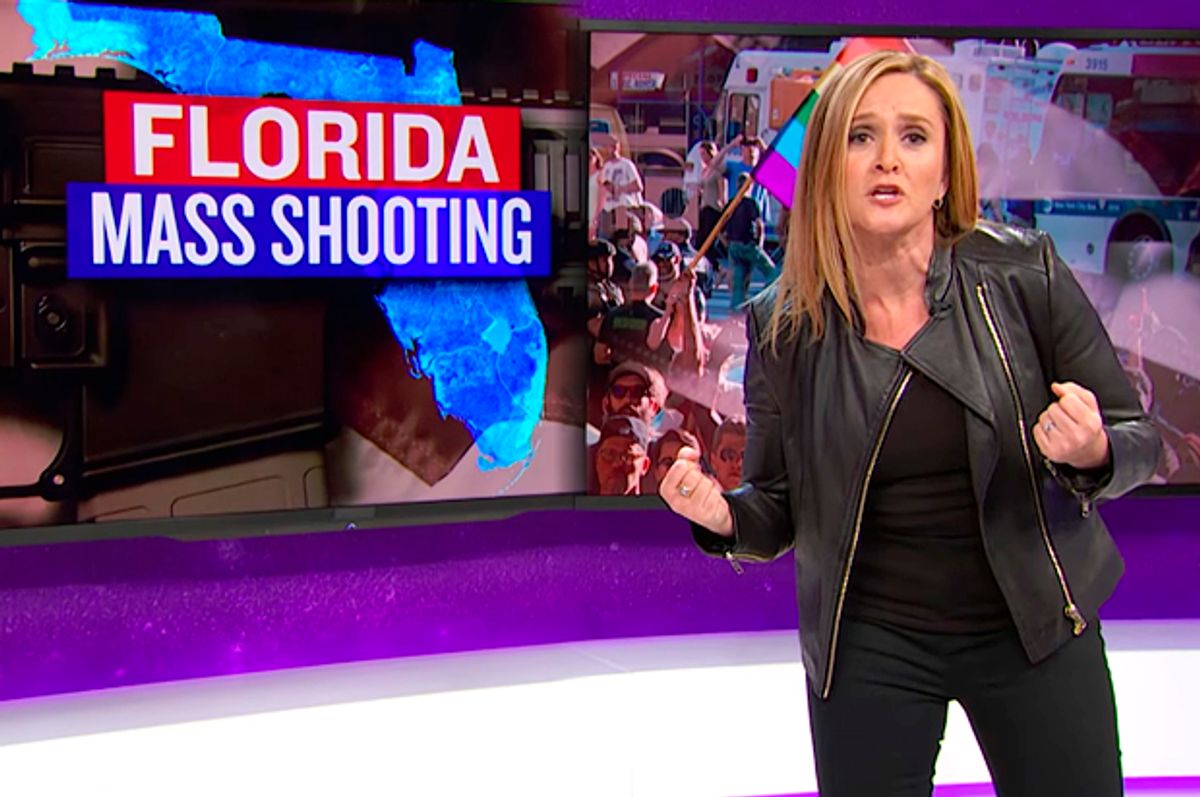 What’s the sensible, respectful, and intelligent way for a comedian to deal with an event so horrific it’s impossible to laugh at? That’s the question late-night hosts had to negotiate Monday night, with the Orlando shooting on everyone’s mind and a pall over much of the nation.

Of late-night figures, Samantha Bee was by far the strongest and most effective. Bee can be self-righteous at times, and her sarcasm doesn’t always land right. But Monday night she was brilliant, with an eight-minute monologue that saw her mostly mad as hell, barely cracking a smile. We usually respond to this kind of tragedy, she says, with hopeful, love-conquers-hate sentiments and earnest expressions of concern. “But you know what? Fuck it! I’m too angry for that. Love does not win unless we start loving each other enough to fix our fucking problems.”

She continues in this mode, taking on the AR-15 (“these high capacity penis substitutes”) and Florida Governor Rick Scott, who she shows on video offering the usual pray-for-the-families rhetoric while dodging questions about the role of guns and ways to avoid having this kind of massacre repeat themselves. (AR-15s can be bought in Florida with no waiting period.) We pray after every shooting, she points out – and still they arrive.

Bee also discussed the way killer Omar Mateen was able to buy a semi-automatic weapon despite numerous warning sings – including beating his now ex-wife – and acknowledged how morally complex the issue is. “These questions are hard.” She contrasted the way Australia dealt, effectively, with its gun problem with our sleepwalking on the issue. Bee, in other words, brought up subjects that liberals have been talking about for years, and gave them context and moral conviction. She reinforced her position as Jon Stewart’s most able heir.

The next best of Monday’s responses came from Conan O’Brien. His monologue was much shorter and more focused, but also clear and direct. After talking about his effort, for years, to keep his opinions out of his monologue, he admitted he couldn’t stay silent any longer. “I am the father of two, I like to believe I had a shred of common sense, and I simply don’t understand why anybody in this country is allowed to purchase and own a semi-automatic assault rifle,” he said. “These are weapons of war and they have no place in civilian life.” His style is more contained than Bee’s, and he’s clearly holding a lot in before he closes with, “It’s time to grow up, and figure this out.”

No one expected Jimmy Fallon, the least political of the five, to take any chances with his monologue, and in fact, he didn’t. Fallon was successfully sincere as he delivered an ode to democratic virtues. “This country was built on the idea that we do not agree on everything,” he said. “That we are a tolerant, free nation that encourages debate, free-thinking, believing – or not – in what you choose.”

This is surely true, and useful advice for children, and indeed Fallon said one of the things on his mind was what to tell his kids. But the killings did not take place because of a widespread failure of tolerance. They took place because a dangerous, hateful man was able to get an especially deadly kind of gun and kill people with it.

Stephen Colbert, who is often politically gutsy, mostly punted on this one. He was morally focused as he talked about our “national script” that follows these tragedies, one that doesn’t fix anything. He sounded like he was winding up to something substantial. But he concluded with “Despair is a victory for hate,” and “Love makes us stronger.” These are both nice ideas, but isn’t this a secular version of praying for the victims and hoping everything turns out okay?

I’m so used to being disappointed with Trevor Noah that his mixed success last night felt like a victory. Most of what he said was smart, but familiar. “We’re shocked, we mourn, we change our profile pictures,” he said. “Than we move on.” People have said a variation of this after many of the shootings over the last few years. He also gave an extended metaphor about tripping over his shoelaces as a kid that – like a lot of Noah’s jokes – went on too long.

But he hit hard when he spoke about the way the nation responded to the 9/11 attacks with changes in air travel. “What we didn’t do was say, ‘This has nothing to do with airplanes – this has to do with radical Islam.’ What we did instead was regulate air travel, to make it harder for the terrorists to do the damage.”

So there was a mix of serious ideas and sweet nothings last night. The sad truth is that each of these figures will get a chance to offer another round of responses the next time a tragedy like this occurs. Here’s hoping that’s a long way out.