Leaders of the anti-gun movement: Six politicians who refuse to stay silent

Despite staunch opposition from the GOP and NRA, these leaders continue to push solutions to gun violence in D.C. 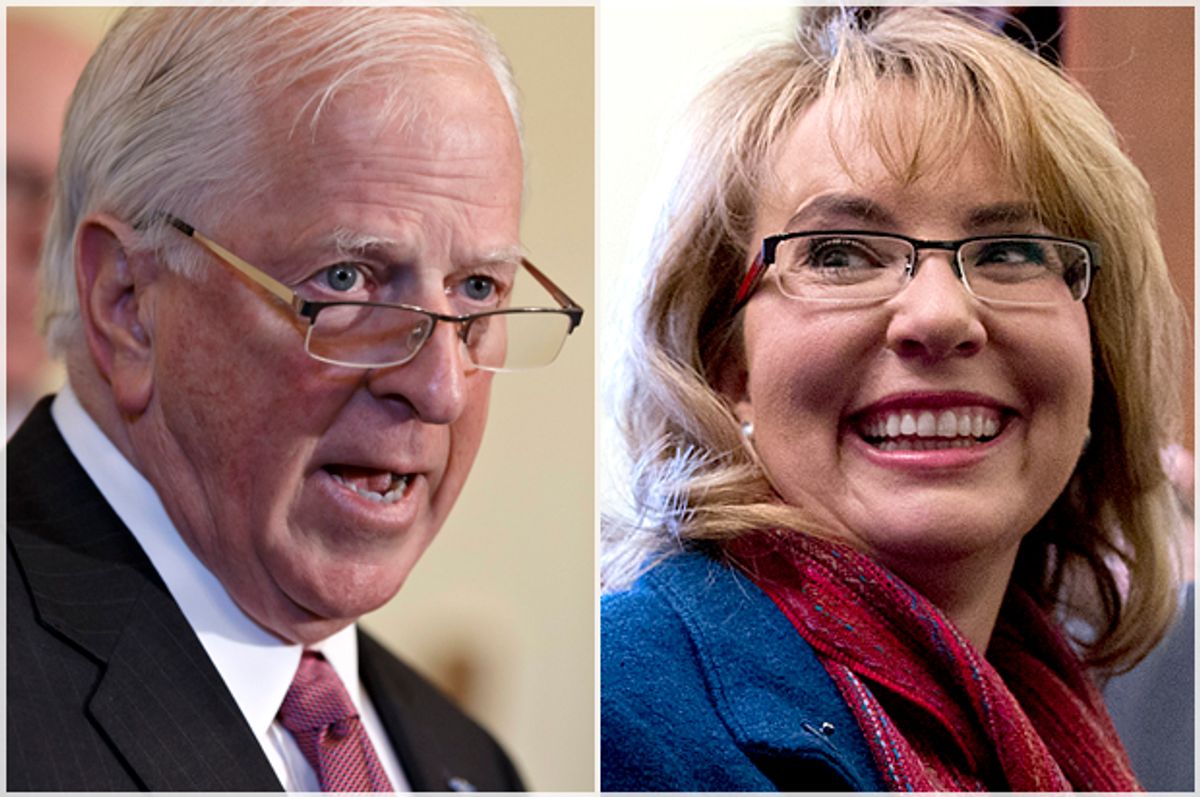 The House of Representatives acknowledged the victims of last weekend's Orlando massacre in predictable fashion on Monday: not with discussion of why a man once on an FBI terror watchlist was able to legally purchase the guns he used to kill at least 49 people, but with a time-honored ritual that has become so commonplace as to lose all meaning: the moment of silence.

Speaker Paul Ryan called for the obligatory gesture, bowed his head for a few seconds, and then attempted to move on to the pressing business at hand: the Networking and Information Technology Research and Development Modernization Act of 2016.

Appalled at Ryan's attempt to turn debate away from gun issues, Democrats began chanting "Where's the bill?" and raised a ruckus that briefly prevented business-as-usual from proceeding.

By Minority Leader Nancy Pelosi's count, there have been "about 11" moments of silence in the House for victims of gun violence in the last year-and-a-half. Yet for all these solemn moments, gun control advocates have little to show in terms of legislative victories.

These six current and former elected officials have tried to address gun violence by doing more than standing in silence:

In June 2015, Dylan Roof killed nine people at a historic black church in Charleston, S.C. with a gun he was permitted to purchase because of a clerical error. Weeks later, Clyburn, whose Congressional district includes parts of Charleston, introduced legislation aimed at closing the loophole that allowed Roof to acquire the weapon.

Though Clyburn's bill stalled in committee, he attempted to raise the issue again on Monday, less than a week before the first anniversary of the Charleston attack. Clyburn began to address the House after the chamber observed its moment of silence for the Orlando victims, but before he could request consideration of gun control legislation Clyburn was gaveled down by Ryan.

Later, Clyburn lamented that Ryan, whom he called "a good speaker," was "being tortured" by fellow Republicans who "worship at the altar of the NRA."

"This is not about ISIS, this is not about any kind of foreign terror," Clyburn said. "This is about guns in America and whether or not we can have some kind of moderation to the Second Amendment, just as we have to the First Amendment."

In January 2011, Giffords, then representing Arizona's 8th congressional district, was meeting with constituents in a Tucson parking lot when a mentally ill gunman opened fire on the crowd, killing six and injuring Giffords and 12 others. Giffords nearly died of a gunshot wound to the head, but after resigning from the House to focus on her recovery, Giffords launched Americans for Responsible Solutions, a political action committee that advocates for gun law reform.

More than two years after the shooting, Giffords returned to scene of the crime to call for stricter background check requirements that may have prevented her assailant from purchasing a gun due to his history of mental illness and drug use. Since then Giffords has taken her fight across the nation to call for laws preventing domestic abusers from purchasing guns, increased research on gun violence, and stiffer penalties for gun traffickers.

"Stopping gun violence takes courage. The courage to do what's right, the courage of new ideas. I've seen great courage when my life was on the line," Giffords told Illinois lawmakers in 2016. "Now is the time to come together, be responsible. Democrats, Republicans, everyone. We must never stop fighting. Fight, fight, fight. Be bold. Be courageous. The nation's counting on you."

Kelly first took issue with congressional moments of silence long before Monday's uproar. After the San Bernardino shooting in December 2015, Kelly told The Atlantic that she refuses to stand during silent observances for gun victims in the House. "I haven’t stood [for a moment of silence] for a year," she said. "I can’t stand anymore. Some people may feel that’s disrespectful, but I feel it’s respectful to the victims and to their families. When is this gonna end? When are we gonna do more than stand?"

Gun control is a signature issue for the Illinois congresswoman, who represents portions of Chicago's South Side heavily impacted by gun violence. Kelly made gun control a central plank of her 2013 congressional campaign, which was buoyed by a Michael Bloomberg-backed Super PAC that spent $2 million attacking her primary opponent's pro-gun record.

Since her election, Kelly has introduced a number of gun control measures in the House, including bills that would prohibit the marketing of firearms to children, require the U.S. Surgeon General to file an annual report on the effects of gun violence on public health, and allow the Consumer Product Safety Commission to issue safety standards on pistols, revolvers, and other firearms.

In 2014, she released the Kelly Report, an analysis of gun violence in America. Among other startling findings, the report noted: "Gun violence has killed more Americans in the past 50 years than in every single American war—from George Washington’s Colonial Army defeat of the British in 1781 to Operation Enduring Freedom in 2014."

Thompson, who chairs the Gun Violence Prevention Task Force in the House of Representatives, is also a vocal supporter of efforts to bar individuals on the no-fly list from purchasing guns. “I’m a gun owner," Thompson said in December. "I strongly believe in the Second Amendment, but I would darn sure rather err on the side of caution and inconvenience somebody who maybe shouldn’t be on that list than to allow somebody who is on that list, who shouldn’t have a gun, to be able to buy one and do terror in the United States of America.”

Thompson also co-sponsored bipartisan legislation with Rep. Peter King (R-NY) to close the loophole that allowed individuals to purchase firearms at gun shows without first passing a background check. (President Obama subsequently addressed the gunshow loophole via executive action in January 2016)  A version of the bill was first introduced in the wake of the massacre at Sandy Hook Elementary School, but was blocked by Republican leadership despite overwhelming public support for the measure.

Like Pennsylvania Sen. Pat Toomey, King is one of a handful of Republicans to have recently drawn the ire of the NRA by defying conservative orthodoxy and putting his name on gun control legislation. In addition to co-sponsoring the background check expansion bill, King, ever the terror hawk, also sponsored the House bill to bar individuals on the no fly list from purchasing guns. “I don’t consider it a liberal or a conservative issue,” King has said. “For me, it’s a matter of common sense.”

In 2015, Maloney introduced a bill that would require gun buyers to hold liability insurance in order to purchase firearms. “An insurance requirement would allow the free market to encourage cautious behavior and help save lives,” Maloney said. “Adequate liability coverage would also ensure that the victims of gun violence are fairly compensated when crimes or accidents occur." Maloney previously sponsored legislation intended to close the gun show loophole.