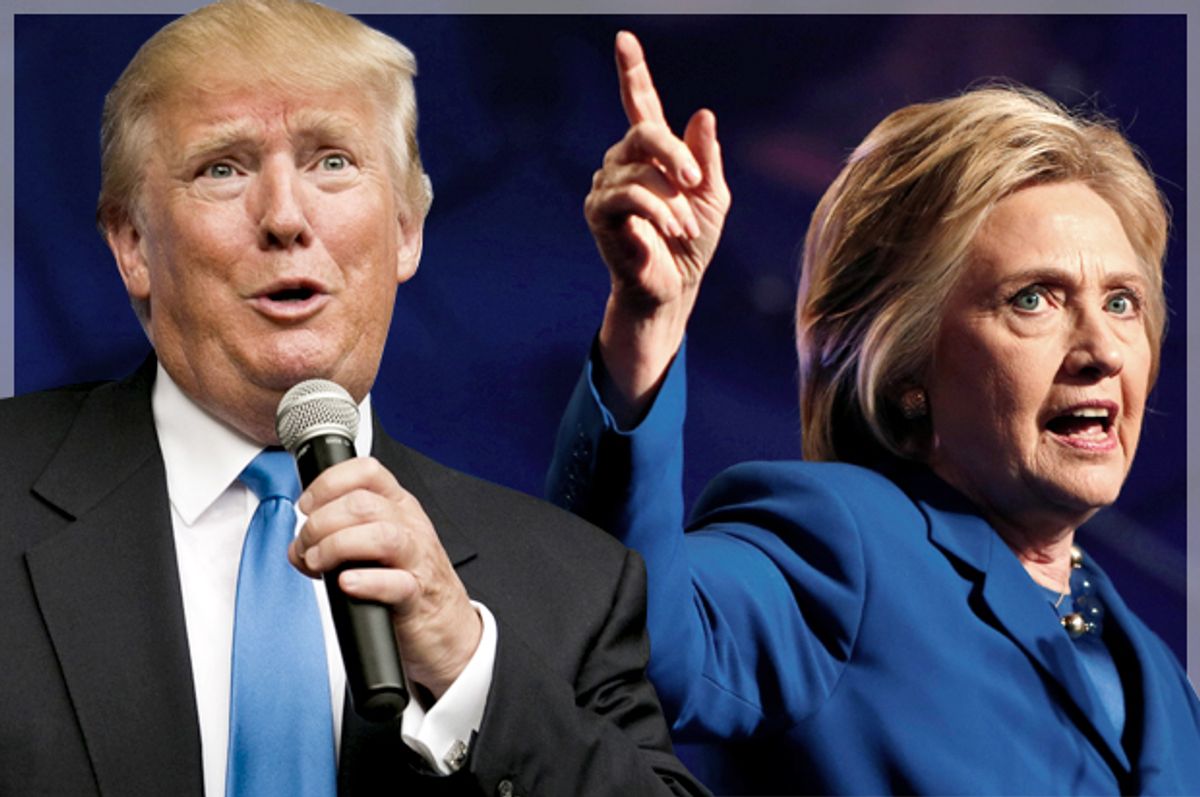 It distasteful to launch back into writing about polls and political strategies even as scores of  people are still in the hospital recovering from injuries sustained in Sunday’s terrorist attack but there’s no help for it. The atrocity in Orlando has offered up such a stark choice between the two presumptive presidential candidates and their respective parties that the subject cannot be avoided. The political fallout from this event (and God forbid any similar events between now and November) may very well affect the outcome and the stakes couldn’t be higher.

I have long suspected that barring any intervening economic catastrophes, this would end up being  a national security election. The reason for this was two-fold. First, the Republicans believed this would be the more fertile ground for them once again now that there was some distance from the Bush administration’s Iraq debacle and they clearly planned to run the campaign on those issues.  And secondly, a woman was likely running for president for the first time and despite everyone’s assumption that she is some kind of bloodthirsty Boudica, the fact is that there were some good reasons to worry  that Americans would turn to the traditional party and the traditional (male) candidate if national security came front and center. It was entirely predictable that the Republicans  would play “the man card” if they could  find an opening.

The two primaries unfolded on separate tracks with the Democrats staging their debate on the economic field and the Republicans staging theirs on the Donald Trump white nationalist field. There were three frightening terrorist attacks during that period, in Paris, Brussels and San Bernardino which all the GOP contenders used to portray the president and Clinton as feckless weaklings at best and terrorist conspirators at worst. But Donald Trump to it to another level by calling for the banning of all Muslims coming to the US and the deportation of Syrian refugees who are already here.  As he went on to win the nomination, polls showed that a vast majority of Republicans agreed with Trump on those policies. The question since then has been whether or not the general public would respond to his primitive chest beating and whether they would reject Clinton as being too weak to keep the nation safe.

Since the Orlando massacre, there have been a number of journalists making the assumption that the attack would inevitably benefit Donald Trump. A Politico piece from yesterday, for instance, conveys the conventional wisdom, with the headline “Clinton braces for fight on Trump's terrain:”

That’s why Clinton is matching the presumptive GOP nominee speech for speech, interview for interview and sound bite for sound bite in the wake of Sunday’s mass shooting in Orlando.

Trump already leads Clinton by 4 percentage points on the question of whom voters trust more to handle terrorism, according to Gallup. And many Democrats worry that his tough talk could resonate in the aftermath of a highly charged tragedy like Orlando.

That Gallup poll was taken before the attack. Yesterday’s Bloomberg numbersl show Clinton still with a disadvantage on the issue of terrorism despite taking a strong lead in the head-to-head matchup.

One might assume that women would be the ones to step up in this situation. After all, at this point close to two-thirds  say they could never vote for Trump. But this particular issue is complicated when it comes to women. Back in April of 2015  I analyzed an article by national security expert Heather Hurlburt in which she examined data about women voters’ attitudes about national security and it was somewhat alarming. She wrote:

Walmart-sponsored focus groups found women expressing a significant and steady level of anxiety over the months preceding the 2014 midterms. At one session, the explanation was Ebola; another, ISIS—whatever had most recently dominated cable-news headlines. The pollsters interpreted the responses as “emblematic of anxiety they feel regarding other issues, including national security, job security, and people ‘getting stuff they aren’t entitled to,’ such as health care and other government benefits.”

The majority of voters express equal confidence in men and women as leaders, but when national security is the issue, confidence in women’s leadership declines. In a Pew poll in January, 37 percent of the respondents said that men do better than women in dealing with national security, while 56 percent said gender makes no difference. That was an improvement from decades past, but sobering when compared to the 73 percent who say gender is irrelevant to leadership on economic issues.

I noted at the time that this would all depend upon the individuals involved but it showed that a national security campaign could cut in unexpected ways and that Clinton could be facing some headwinds even with Democratic women if that was the issue on which the election  turned.

But as he has in every other way, Trump has scrambled the deck. His performance has been so ignorant and contemptible that it’s hard to believe that women who many be anxious about national security would be in any way consoled by the prospect of this cretinous know-nothing being in charge of ensuring the safety of our country. In fact, any anxious person listening to Donald Trump talk about terrorism would likely have an immediate panic attack.

It’s a political truism that “fear sells” which means that after a terrorist attack it might be expected to disadvantage the first woman candidate who also happens to be a Democrat, the party which has often been portrayed as weak on national security. But Donald Trump does nothing to assuage people’s fears --- he does the opposite. He scares people in a more fundamental way, worrying them that he’s going to make a terrible error in judgment and endanger the nation in ways they don’t want to contemplate.

According to the latest Fox News poll, taken just before Orlando, Trump’s most debilitating weaknesses as a candidate are that virtually nobody believes he has the temperament and the mental stability to be president, a belief which he has thoroughly validated over the past few days. That same poll showed that a large majority of both parties believe Clinton does have the requisite knowledge and disposition to be commander in chief.

Many people may not want to have beers with either one of these candidates but they seem to be able to get  past the usual reflexive assumptions about Republicans and Democrats.  This may be the election that finally shakes the country out of the absurd notion that bellicose, right-wing fear-mongering will keep Americans safe. It has always done the opposite.