It's time for Democrats to unify: Why even the most idealistic Sanders voter should support Clinton 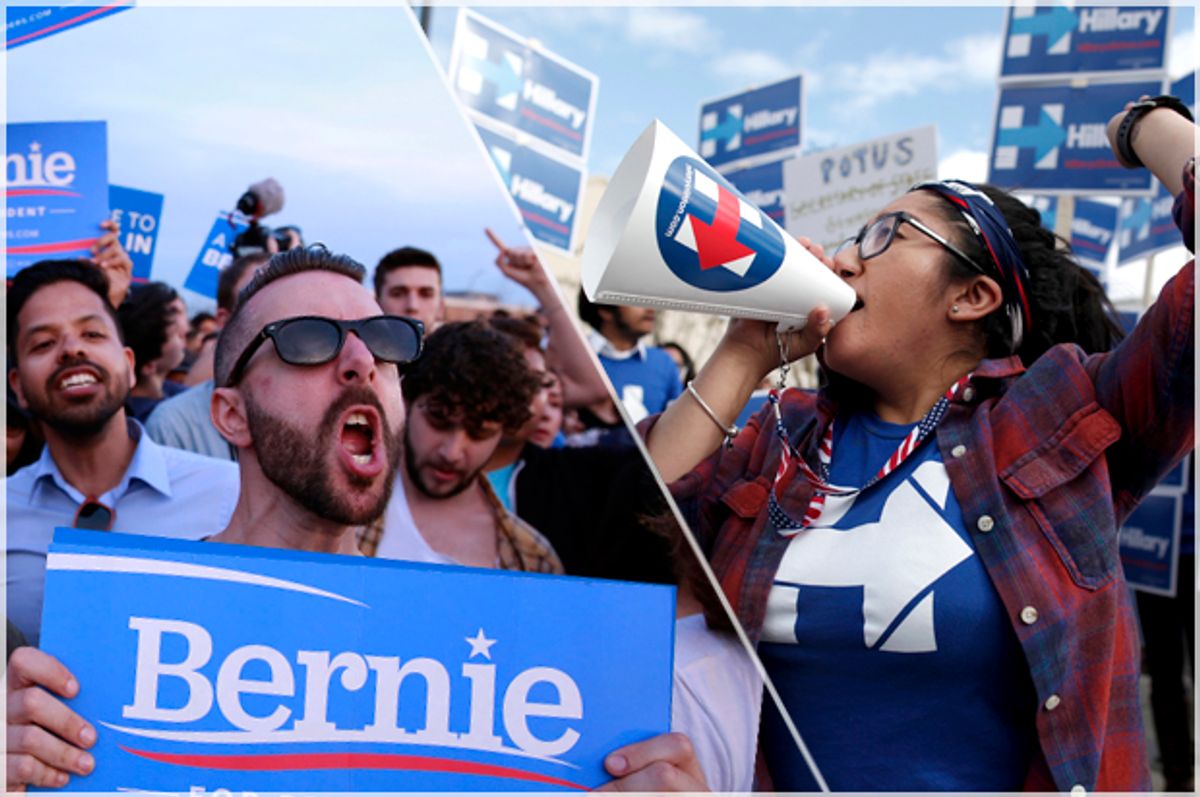 We don’t know what Bernie Sanders discussed with Hillary Clinton when the two of them met Tuesday night, but it’s fair to assume that the conversation revolved around Clinton’s new status as the presumptive Democratic nominee. As the burgeoning Bernie or Bust movement clearly demonstrates, a lot of Sanders supporters are unhappy with the prospect of backing Clinton. Of course, because Green Party candidate Jill Stein has offered to run on a joint ticket with Sanders, they may not actually have to do so.

And so we find ourselves at a crucial junction in American political history. If Sanders and his supporters swallow their pride and acknowledge that, despite her flaws, Clinton offers them their best chance of achieving progressive policy changes, they will use their newfound leverage to push her to the left and then elect her president. On the other hand, if they place ideological pride over doing the right thing, they can contest Clinton’s nomination up to the Democratic convention or join Jill Stein on a third-party ticket… and their legacy might wind up being the election of President Donald Trump.

Before I encourage both Sanders and the Bernie or Bust movement to support Clinton, it is first necessary to dispense with the popular arguments used against doing so. The most common refrain that I hear from those in the Sanders camp is that Clinton somehow “stole” the nomination. Although she undeniably had far more support from the party establishment, this in its own right doesn’t constitute stealing (after all, Trump was also overwhelmingly opposed by his party establishment, with well-known results). Yes, Clinton has 581 superdelegates to Sanders’ 49… but she also won 2,219 pledged delegates to Sanders’ 1,832. More importantly, she won 15.8 million popular votes to Sanders’ 12 million, making her without question the preferred choice of a majority of Democratic primary voters.

This leaves the policy differences between Clinton and Sanders, which though meaningful are hardly prohibitive. Sure, Stein has opportunistically claimed that Clinton might be worse than Trump, but if you share Sanders’ values that assertion simply doesn’t hold up. As I’ve explained in the past, Clinton wants to invest $275 million in job-creating infrastructure spending (compared to $1 trillion for Sanders), raise the minimum wage to $12 an hour (compared to $15 for Sanders), maintain Obamacare (compared to Sanders’ support for a fully socialized health care system), and establish debt-free college tuition for low-income families (compared to free college for all public university students under Sanders). On every major issue in this election, Clinton’s stances are moderate versions of those taken by Sanders. Trump, on the other hand, favors economic policies that blatantly favor the wealthy… and, unlike both Clinton and Sanders, has focused his campaign on pandering to bigotry against Hispanics and Muslims instead of addressing the real economic problems facing ordinary Americans.

In short, anyone who shares the ideals professed by Sanders during this campaign (including Sanders himself) is morally compelled to see that while Clinton may profess a watered down version of those values, Trump embodies their direct antithesis. As a consequence, it is unconscionable to risk a repeat of the 1968 presidential election, in which a liberal insurgent (Eugene McCarthy) took his protest candidacy to the Democratic Convention and thus weakened nominee Hubert Humphrey in his unsuccessful campaign against Richard Nixon. Similarly, if Sanders accepts Stein’s offer and runs as the Green Party nominee, he risks repeating the role played by Ralph Nader in the 2000 presidential election, when his third-party candidacy siphoned enough votes away from Democrat Al Gore to throw the election to Republican George W. Bush.

That said, it’s not enough to simply point out the overlap between Sanders’ message and Clinton’s campaign platform, though. If we’re going to be ideologically honest in this election, we must remember that the Democratic Party has a long history of delivering on its promises. Franklin Roosevelt spent the 1930s passing economic and social reforms that relieved the rampant misery of the Great Depression and provided a safety net for working class Americans; Lyndon Johnson’s administration spent the 1960s passing civil rights legislation, creating Medicaid and Medicare, and waging a successful war on poverty; and Barack Obama, despite the ferocious opposition of a Do-Nothing Congress, managed to end the war in Iraq and pass comprehensive health care reform.

This is why, when a progressive like me urges Sanders and his backers to rally behind Clinton, we are the ones being principled — not the intransigents who would throw out the baby with the bathwater. The Democratic Party, for all of its flaws, is the only institution within our existing political system that could realistically achieve the objectives laid out by the Sanders campaign. Because Sanders has put in such a strong showing against Clinton, he is in a position to demand that she spend her presidency addressing the problems of income inequality and plutocracy to which he has so eloquently drawn attention. To throw all of this away in a fit of pique, or because our backers cling to the fanciful idea that a miraculous Green Party revolution might occur (despite the lack of any statistical evidence that it would win in the general election), is worse than quixotic. It is downright foolish.

If Sanders wants to make a point, he will force a contested convention and/or run as a third-party candidate. On the other hand, if we want history to remember the Bernie Sanders campaign as one that made a real difference, we will demand that he instruct his supporters to do the right thing and vote for Hillary Clinton.