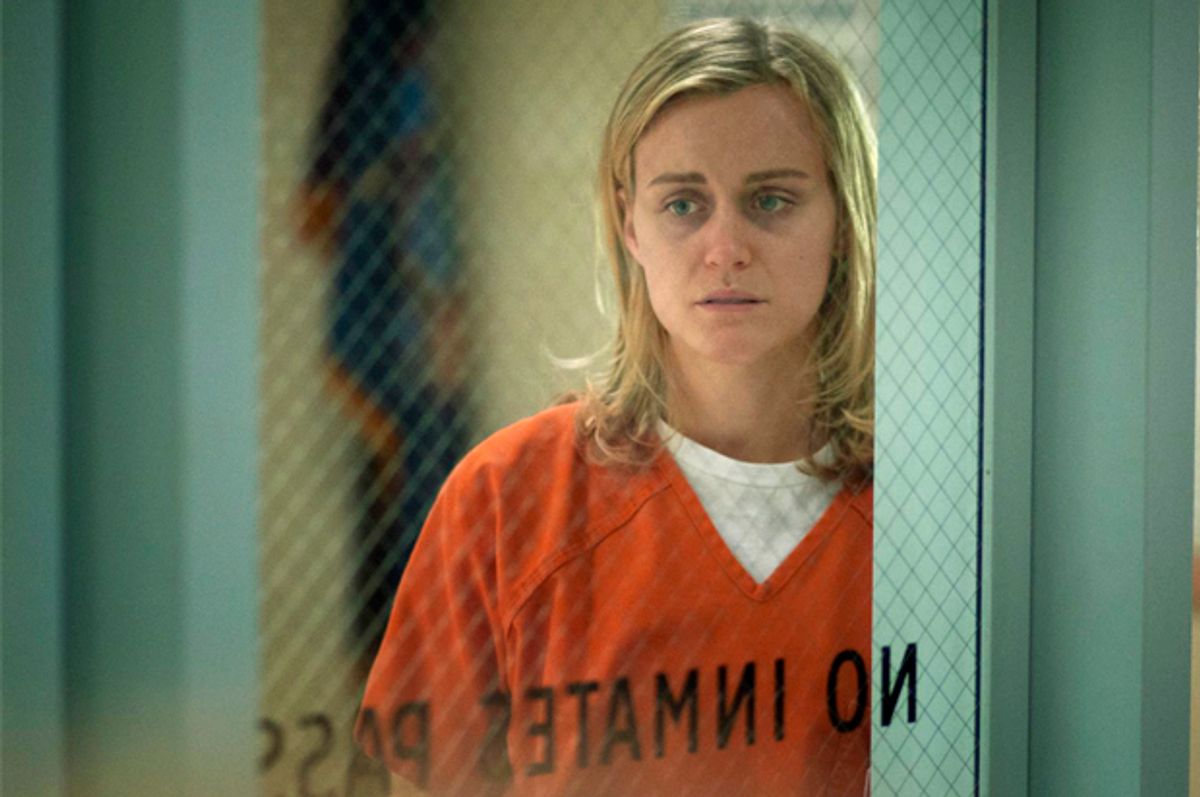 Taylor Schilling in "Orange Is the New Black" (Netflix)
--

I was attending community college and carefully hiding from classmates the fact that I lived in a children’s home for orphans and delinquents. After receiving my GED at age 17, I had finessed my case manager into thinking I had big dreams for my future. I told her I wanted to be a social worker to help at-risk kids like me. The truth? I petitioned to take a class in hopes of bumming cigarettes and slurping down contraband sodas purchased with change I’d scavenged from the group home’s grounds. The first thing I learned from living in state institutions was how to manipulate my custodians.

For two hours twice a week I reveled in a game of make-believe, pretending to be free. I made a ritual of going to the restroom mid-lecture, not because nature called, but because it thrilled me to go without asking. The first month went so well that my case manager gave me a half-hour bonus to do homework in the school’s computer lab.

That’s where I met Ronnie. We bonded over mutual Microsoft impairments and our newness to the sleepy town stretched along the northern Illinois side of the Mississippi. He’d been recruited from Louisiana to play basketball and I’d recently been paroled from a juvenile prison in Chicago.

“Let me give you a lift,” he said in a syrupy Southern drawl. Ronnie had coffee-colored eyes and high, chiseled cheeks and smelled of Cool Water Cologne and gym shoes. I leaned in to soak up some daydream material for later.

“Can’t, friend’s on her way,” was my go-to reply. Said “friend” would actually be a counselor, clocking me in a giant blue shuttle van parked outside the school. Five minutes late was a write-up and could translate into the revocation of my parole.

My descent into the justice system’s labyrinth began a few years prior, after my parents divorced and I went from living in a crowded house with five siblings to a trailer with my mother. She transferred me from the Catholic school I’d loathed to public school. But no longer wearing uniforms was a game changer. Kids at my new school took name brands seriously and my revolving Wal-Mart specials kept me from joining their ranks. My mother’s time was siphoned by long hours at the printing press, boyfriends and booze. I tempered my loneliness with joints, and to avoid becoming a complete loner, acquired friends from a neighboring town. But some of these new companions were black: high treason in a predominantly white community.

Cue ridicule. Crack knuckles. “Gangbanger” was the nicest of my colorful new names.

I gravitated toward kids who were similarly combatting idleness and absentee parents. I was expelled for fighting, became a runaway and eventually was arrested for stealing a car at age 15. I was sentenced into court custody until age 21 and was shipped five hours north of my rural town. At first, I welcomed this initiation into street culture. It was a solid escape from the chaos at home.

But kiddy prison was not as airy as the minimum security facility depicted in “Orange Is the New Black.” Thanks in part to the super-predator rhetoric of the Clinton administration, facilities were overcrowded, forcing murderers and nonviolent criminals to be bunked together in closet-sized cells. It was, however, the first time I experienced solidarity amongst peers. Despite actual disparities, we were all leveled by our familiarity with counting cinderblocks to pass the time. But not having a lease on one’s own will is exhausting, and after two years, I was itching to decamp.

In Ronnie’s company, I forgot about being state property. His flattery allowed me to imagine that I was desirable. After mistaking my refusals for playing hard to get, he stepped up his game.

“Big party this weekend, you down?” When that didn’t work, he said, “Could use a cheerleader at tonight’s game.” Then came this: “‘Star Wars’ premieres on Friday. Let me take you on a date.”

The last one broke me. I ached to be normal and desperately wanted to do what others my age seem to be doing—even if it meant turning back into a pumpkin at midnight. But before I could accept Ronnie’s proposal, I had to proposition my guardians.

“I promise not to start any more riots during group therapy,” I said.

“Okay,” my case manager conceded. “But only if he meets your treatment team and they approve unanimously.” Team was code for case manager, two counselors, a therapist, a caseworker and a social worker. I was not a catch; more like a catch-22.

I assessed my options: blow the lid off operation hide-my-group-home-status or spend another Friday night plugging my ears, trying to shut out kids fighting over missing Uno cards.

I made the call.

“No,” I laughed, twisting the curly phone cord around my arm. “Just come to this address. No biggie. Politics, that’s all.”

When a counselor tapped on my door for roll call the following morning, I wasn’t sure if I’d slept between practicing kissable facial expressions and naming children. I tried to act casual, standing at the double-glass doors of my unit, speculating on each car that pulled in.

When Ronnie screeched into the parking lot behind the wheel of a rusted white Cadillac, I rushed to greet him. His stare was bug-eyed and not fixed on me, but at my unit where a cluster of fifth and sixth graders were waving frenziedly.

Usually talkative, he went mute as we entered an adjacent administration building. There, the team was lounging around a conference table with an additional guest—the staff nurse.

My case manager directed Ronnie to take a seat at the head of the table and instructed me to sit in a chair in the corner. The scene was similar to my sentencing, where I was an observer and not a participant in the discussion of my future.

Questions darted at Ronnie from all directions. “Where’d you grow up? Work? Grades? Drugs?” His face flushed while his knuckles turned white around his keys. He stayed perched on the chair’s edge, on his mark to bolt out of the ambush.

After 20 savage minutes, the team conferred, then delivered its verdict. “You pick her up, we bring her home.” My case manager stood up and outstretched her palm. “Just need to Xerox your ID.” Ronnie remained frozen until she returned—all smiles—then dashed to his car without a word.

Come Friday, the girls in my unit were excited to help me primp. “Tell us how he asked again.” They spritzed curls in my blond ponytail, checked for precise creases in my jeans and ensured that I chose the least offensive of the pit-stained T-shirts from the donation bin. I was the one who was going to neck at the theater, but this was their moment, too.

The movie started at 7:00, so I expected Ronnie no later than 6:30. At six, the girls took their post at the doors, calling out each car that pulled in. “Red--not him.”

At 6:55, a counselor coaxed the girls away from the door, reducing the normal bustle to whispers.

The mercy call came hours later. “Coach set a curfew,” was the best he had. I was mortified. I had set myself up for failure and disappointed the only girls who had ever looked up to me.

After that, Ronnie changed his library schedule. When I reached the lab, traces of him lingered, causing stomach cramps where butterflies once flew.

I eventually was promoted to Independent Living, where I leased an apartment and practiced new freedoms, like going to parties. It was a small town, so I was not surprised to run into Ronnie. He saw me, glanced around nervously and asked, “Did you run away?” I explained my situation. He confessed to lying about curfew and apologized, “That was just too crazy.” We truced on a friendship that never materialized. For him, solving the mystery had spoiled my allure.

Ronnie’s rejection, combined with a familial void, burned into me a belief that I belonged to the nation of no one. I did not have respect for myself and, believing I was damaged goods, was not choosy who I bedded so long as they’d come back for more. When the time neared for me to be released from parole, I considered my freedom, which true to Plato’s Allegory form, had not been this beautiful thing I fantasized in my cell. It was disastrous and even lonelier than I remembered.

I decided to intentionally revoke my parole; the warm blanket of the institution appealed more than being released with nary a counselor or human being to check on me. But this was borrowed time. New laws were enacted to decrease the prison population, which scrolled back my discharge date to age 19. After four years away, I was released back to my mother with a trash bag containing everything I owned. I tried to blend back into the family, but was detached. I was a foreigner among familiar faces I no longer knew how to communicate with.

I scrounged enough savings from working multiple fast-food joints to relocate to another college town and became the first in my family to graduate from a university. There, I studied anthropology and developed a hunger to see the world I’d only experienced on the page. Perhaps the greatest gift from my seedy past was how well I dealt with isolation and how easily I could sleep in some of the most defunct places on the planet. I transformed myself into a backpacker: couch-surfing with strangers, sleeping in $3 hostels, in bus stations or on the beach. I eventually settled in New York, which is brimming with lone wolves like me. I no longer have inhibitions about where I came from. But I am eyes-wide-open about where I’ll go.