"You have those pipe dreams that Spielberg is going to see it": The ultimate film geeks finally finish their "Raiders" masterpiece

Salon talks to the makers of "Raiders of the Lost Ark: The Adaptation," a shot-for-shot remake of Indy's adventure 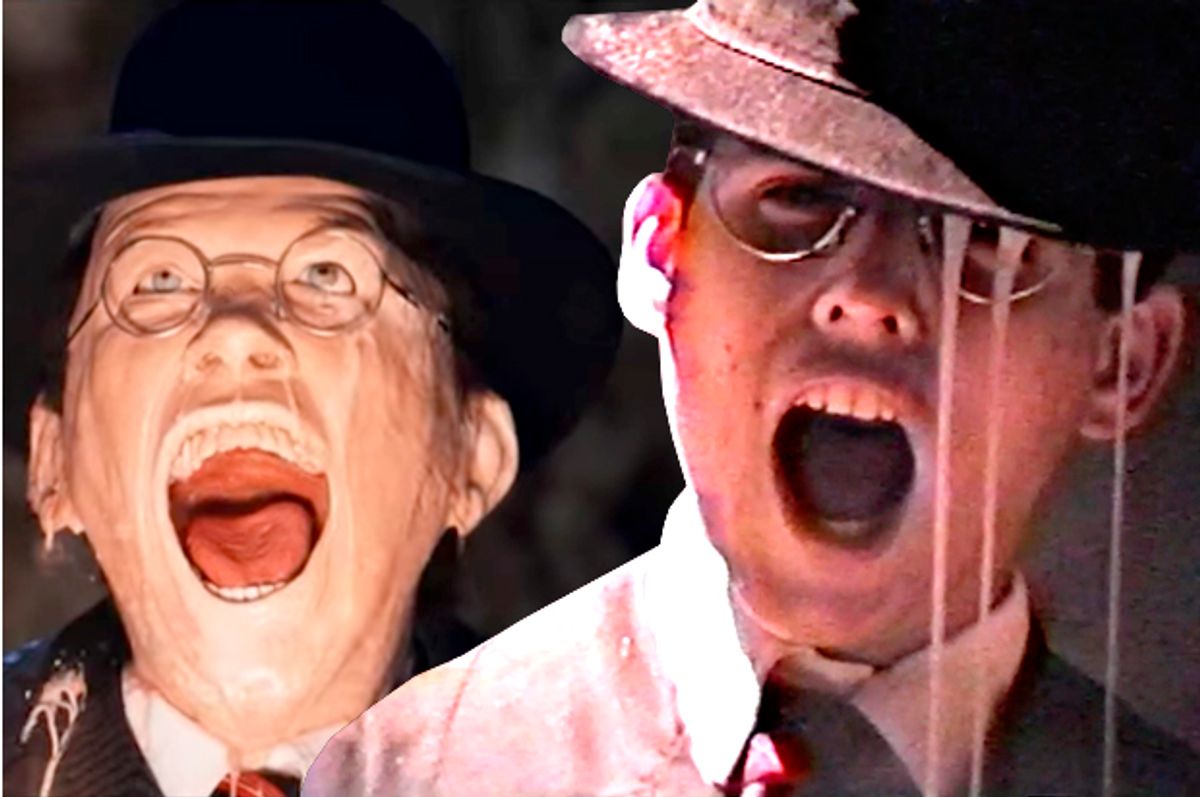 “Raiders of the Lost Ark: The Adaptation” is the ultimate film geek project: a shot-for-shot remake of the classic blockbuster “Raiders of the Lost Ark.” It was made in 1989 by then 11-year-olds Eric Zala and Chris Strompolos. The boys and their friends filmed it every summer for seven years. And they completed all but one scene—the plane scene.

The new documentary, “Raiders!: The Story of the Greatest Fan Film Ever Made,” directed by Jeremy Coon and Tim Skousen, chronicles the history of the cult masterpiece “Raiders of the Lost Ark: The Adaptation” as the guys reunite to finally—hopefully(!)—finish their film.

As “Raiders!” shows, Eric and Chris are intrepid filmmakers. They use birthday money to buy costumes and use Eric’s home as a set for many of the sequences. They have trouble with fire, causing their parents to shut down the production at one point. There are dangers with Belloq’s plaster mask, which requires some medical attention. And there are some rivalries that develop between Eric and Chris as well as with their friend Jayson Lamb that cause the guys to stop talking to one another.

But there is also the prospect of realizing their childhood dream, a dream that goes Technicolor after their film becomes an underground cult hit fawned over by Harry Jay Knowles and Eli Roth, which generates the very real possibility of getting their homemade movie seen by Steven Spielberg.

Salon talked with Chris Strompolos about “Raiders of the Lost Ark: The Adaptation” and the new documentary, “Raiders!: The Story of the Greatest Fan Film Ever Made.”

Why “Raiders of the Lost Ark?” What was it about this film that seemed viable that you said, “Yeah, we can do that!”?

I think as a young boy, growing up in the late ’70s/early ’80s, we were coming out of the “Star Wars” generation. I took a liking to Han Solo and Harrison Ford. “Raiders” was so well promoted when I went to see it as a 10-year-old. Indiana Jones was much more real and accessible to me. He was an academic, he got hurt and was vulnerable, he had girl troubles, and he was fighting the bad guys who really existed. He was a larger-than-life hero with a noble cause, a leather jacket, a hat, a gun and a whip, and he used his smarts.

“Raiders” means a lot to a lot of people. It’s a special film and has so many beautiful elements in it that were regenerated from the serials. Steven Spielberg, George Lucas and Lawrence Kasdan caught lightning in a bottle. People who know and love “Raiders” have kindred stories. It’s a wonderful thing.

Yes! I’ve always had a very strong, personal connection to the film because my father was an archeologist. Did you feel you were making a film or remaking one?

Alan Stenum, who played Sallah [in “The Adaptation”], was there every summer. He said it so nicely. In reference to Eric and I, he said we weren’t remaking a film, but that we were making “Raiders of the Lost Ark.” There was a level of conviction and determination. It was our goal, and we took ourselves very seriously, even with the crappy-looking Betamax. It was a passion project. “Raiders” is visually superior, and we were remaking it, but our consciousness was that this was our world that we have control over, so let’s make it the best film we can for ourselves.

Why didn’t you get the airplane scene back in the day? What made this scene the most difficult?

It’s one of the most complex sequences. To pull it off, we had to blow up an airplane, and we had to make it look convincing, not fake, or use miniatures. We tried to command the elements, choosing an airfield and getting a Cessna, but we stepped back because it was too complicated and too dangerous. Our justification [for leaving it out originally] was that the narrative worked fine going from the well scene to the truck scene. We never got a chance to do it. Our drive was to do it.

You experienced various setbacks as kids, and many setbacks as adults. How, and why did you persevere and work around the struggles?

I attribute a lot of that to choosing my friends wisely. I knew my own personality couldn’t helm all this on my own. I had to rally in bringing Eric and Jayson in. The three of us have different personalities but powerful chemistry. When Eric and I work together there is no stopping us. We wanted to quit, but it was a quagmire: We have to finish the [plane] scene. Year after year, when we tell people we’re going to finish it this summer and you keep repeating that, you charge yourself with that responsibility. I’m glad we did it. The creative process of doing something isn’t always fun. Sometimes it’s after that [struggle] that you are able to enjoy the bliss. It took us 35 years. That’s not entirely true, but it was a good way to end that question!

You literally grew up on film, and in the process you created a makeshift family as well as created a playground for yourselves. Can you describe how filmmaking taught you life lessons?

I think it was a place for us to escape to, and the documentary [“Raiders!”] captures that. We have these strange dysfunctional worlds to escape and movie-making is a beautiful escape. Even the modern-day film business is a refuge for lost people who feel safe, protected, understood, and have a purpose. Everything is there—the emotions, the excitement—and it’s temporary and then you move to the next thing. That’s what growing up inside this world taught us. It’s a strange, highly charged arena that you submerge yourself into. It’s all the things that go into that process. “No” is not the final answer when someone says “no.” You keep asking for it, and find resources, and make things happen. And that’s what Eric and I are really good at when we work together. You fall back on what you learned. You become resourceful and don't give up and push and push.

“Raiders!” shows there were rivalries and personality clashes. How were you able to work together for seven years, have a falling out for more than a decade, and then come back together to try and finish the film?

I think Eric and I know each other very well. In your 20s you lose yourself and redefine yourself and your priorities as you settle into place in your 30s. You find your path. I was committing myself to an artistic path and Eric was putting his life together in a different way. Those components drove us apart. We didn’t have to re-learn anything. We know who we are when we work together. We’re in sync. Eric said, “It’s iron sharpening iron.” We make each other better.

It must be gratifying to have had “Raiders of the Lost Ark: The Adaptation” become an underground cult favorite, championed by Harry Jay Knowles and Eli Roth. Did you ever expect it to reach the huge cult status it has?

Never. Absolutely never. You have those pipe dreams that Spielberg is going to see it. You have that dream while spray-painting hieroglyphics on your mom’s basement wall. They seem far away. When we were invited by the Drafthouse family for the World Premiere in 2003, Eric summed it up best by saying, “This was never supposed to happen. It was just for ourselves.” Everything else has been people rallying for the movie, and wanting to see it. Every day I’m thankful. I’ve been asked, “Aren’t you tired of ‘Raiders'?” And I struggle with that as I continue to define myself, but I’ve come to terms with it. It’s not a bad thing. Indiana Jones is a classic, timeless hero.

What advice would you have wanted as budding filmmakers embarking on a similar project?

You have to choose your friends and team members wisely and surround yourself with people who know more than you do. Eric is a better director and I’m a better producer and Jayson is a great cameraman. Refine that thing in yourself to identity strengths and pull the energy together. It’s about the project, not your ego. And while it’s trite to say “Don’t give up,” the creative process is uncomfortable, and you have to push yourself and get through the agonizing times and forge ahead. I’d tell kids in any creative field—music, painting, programming, “Don’t let anyone convince you that you can’t do something.” If someone gets in your mind and sterilizes your passion, or says that you’re not capable of it, that’s a terrible thing.

OK, I almost hate to ask this, but I feel obligated, and I really want to know: Would you guys ever want to re/make “Temple of Doom?”