The fine line between snark and mean: The biting satire of "Odd Mom Out" in danger of dulling

"Odd Mom Out," Bravo's "rich ladies are ridiculous" series, returns for a new season without some of its brilliance 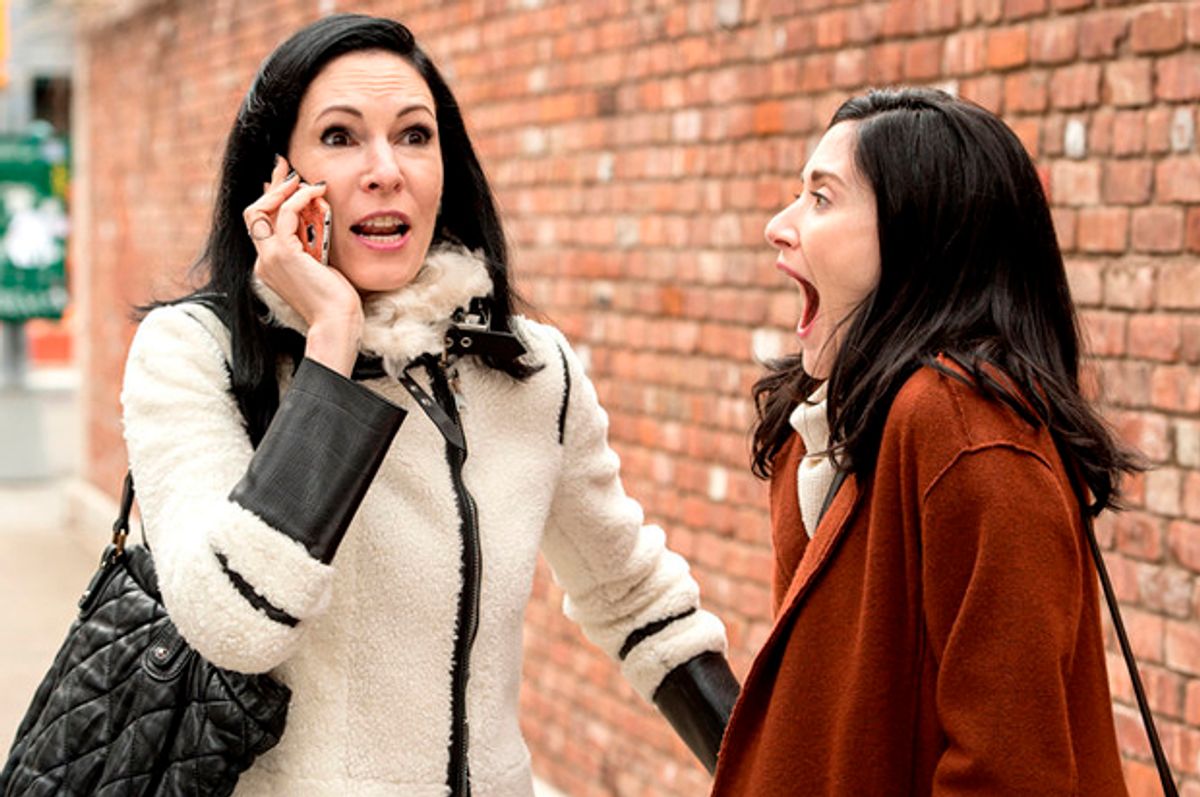 “How can you possibly watch that?” is a question about my Bravo habit that I'm forced to answer with irritating frequency. Having already dissected the broader societal value of Bravo's slew of reality television offerings, the Real Housewives franchises in particular, I've settled on a far simpler go-to response. Because it's fun. It's fun to observe wealthy Manhattan or Beverly Hills women in their natural habitats, primping themselves and picking at each other, and to feel completely detached from their petty bickering. And it's even more fun to do so with friends, to plop down on a couch and dissect, discuss and, occasionally, learn from their behavior over a bottle of cheap wine.

"Odd Mom Out," one of the channel's few forays into scripted television, does our work for us. The show, returning for Season 2 on Monday, is loosely autobiographical, with creator Jill Kargman playing lead character Jill Weber. The character Jill is not-your-typical Upper East Side housewife, who vacillates between trying to win the acceptance and approval of her WASP-y sister-in-law Brooke and her friends, and trying to avoid them altogether. Season One's parodies of our favorite reality stars, much like its slew of pop culture references, were charmingly specific. (One sight gag in season one depicted a mom, reeling from her child's private kindergarten rejection, hyperventilating into a paper Ladurée bag.) The mockery was so specific to a tiny clique of obviously privileged women that it could hardly be interpreted as demeaning to the female population at large. It felt, much like other Bravo offerings, anthropological.

The same could be said of an episode that pulled Jill out of her supposedly discomfort zone and into Brooklyn. At first charmed by her new, seemingly relaxed surroundings, Jill slowly learned that the rules were different, but just as overbearing, and the moms crunchy, but still, in their own way, tyrannical. The take-away from the episode was, again, also that of its fellow Bravo offerings: rich people are all ridiculous. The episode was crucial because it forced Jill to admit she had a degree of affection for her fellow UES moms, and even some loyalty to them. As viewers, we began to develop something nearing that as well. At times, such as when Brooke dismissed her army of staff just so she could pass gas in private, we even began to pity them.

But the truly glorious innovation of "Odd Mom Out" was the portrayal of Jill's relationship with best friend Vanessa. In an inversion of television tropes, Jill's husband Andy serves as a bedrock of stability and a winning side character. Vanessa, in contrast, is Jill's true partner and confidante, with the two exhibiting behavior that would be annoyingly cutesy or hyper-dependent in a romantic relationship but feels new and refreshing between female friends of a certain age. In turn, Jill and Vanessa's friendship also provides much of the dramatic tension of Season One. When Jill begins to prioritize Brooke over Vanessa, she pours salt in an open wound by suggesting that her obligations to her relatives constituted “adult” responsibilities, and her obligations to her single, childless best friend are comparably trivial. “I thought I was your family,” a dismayed Vanessa replied. Eventually, Jill came around completely, affirming that platonic friendships can be familial bonds, and that friends are thus entitled to place demands on one another for the cornerstones of any healthy relationship: attention, respect, and time.

The manner in which the two reconciled also affirmed Vanessa's lifestyle — a professionally successful, satisfied human who isn't especially interested in meeting a man or having kids. Her strains of self-doubt stem less from internal frustration than the sneering judgment of strangers and subtle diminution of loved ones which accompany that lifestyle, and so she occasionally needs reassurance that she's doing just fine. (Last season saw such support coming from unexpected sources in unexpectedly moving moments.) When Vanessa, reeling from Jill's charge of immaturity, called up an old flame, the show faced the danger of entering cliché territory. Instead, she later shrugged off her newly acquired date for the evening but beamed with excitement and pride about acquiring a new apartment.

Such empowering moments, unfortunately, present a contrast to the season 2 premiere, whose satirical portrayals are less pointedly specific. Some are even hackneyed tropes. When Jill returns to her old office to meet with her former assistant Kate, the assistant learns she's been fired. “I gave this place my twenties. And my thirties. I have no husband, no kids, no sex life,” she shouts. “And I'm losing my hair!” Kate adds, weeping as she tears out her extensions. Read generously, these difficult moments are meta satire on pop culture portrayals of women, or a statement about the constant, impossibly high standards for women in and out of the workplace, and the inevitable futility of trying to meet them. But such readings are very generous indeed, and it's hard not to begrudgingly acknowledge that the premiere teeters toward the misogynistic and, perhaps more cringe-inducing, mean.

There are, however, reasons to be hopeful. Brooke's character development this season, in which she successfully launches a line of handbags, serves as a nice reminder that stay-at-home moms can also be savvy and resilient. Though she is being, realistically, bankrolled by her ex, she's also smart and tough and, as even Vanessa must admit, quite good at this. Jill, on the other hand, is told by her former boss – another stereotype straight out of "The Devil Wears Prada" who complains that her assistant cries when she hits her – that her work lacks “moxie” or “balls.” Brooke's seamless entry into a world Jill is struggling to reclaim her place in might prompt some internal reflection from our heroine.

We saw suggestions last season that Jill's insecurity tends to manifest itself as meanness, always in the form of snide side-commentary. Like Brooke, she was occasionally a bully, just a less honest one. Jill's growth as an artist might also result in some personal growth and introspection in episodes to come. One hopes we do get to watch her develop some balls, and channel her side snark into creative output. If "Odd Mom Out" chooses to navigate this terrain, it will continue its streak of originality: middle-aged female characters are rarely afforded space to privilege their self-exploration and redefinition within the very real confines of their everyday lives and the “adult responsibilities” they entail. It is, unfortunately, a realm where scripted is but a reflection of reality.