Firearms in bars: The NRA's "guns-everywhere" philosophy clashes with the idiocy of drunks packing heat 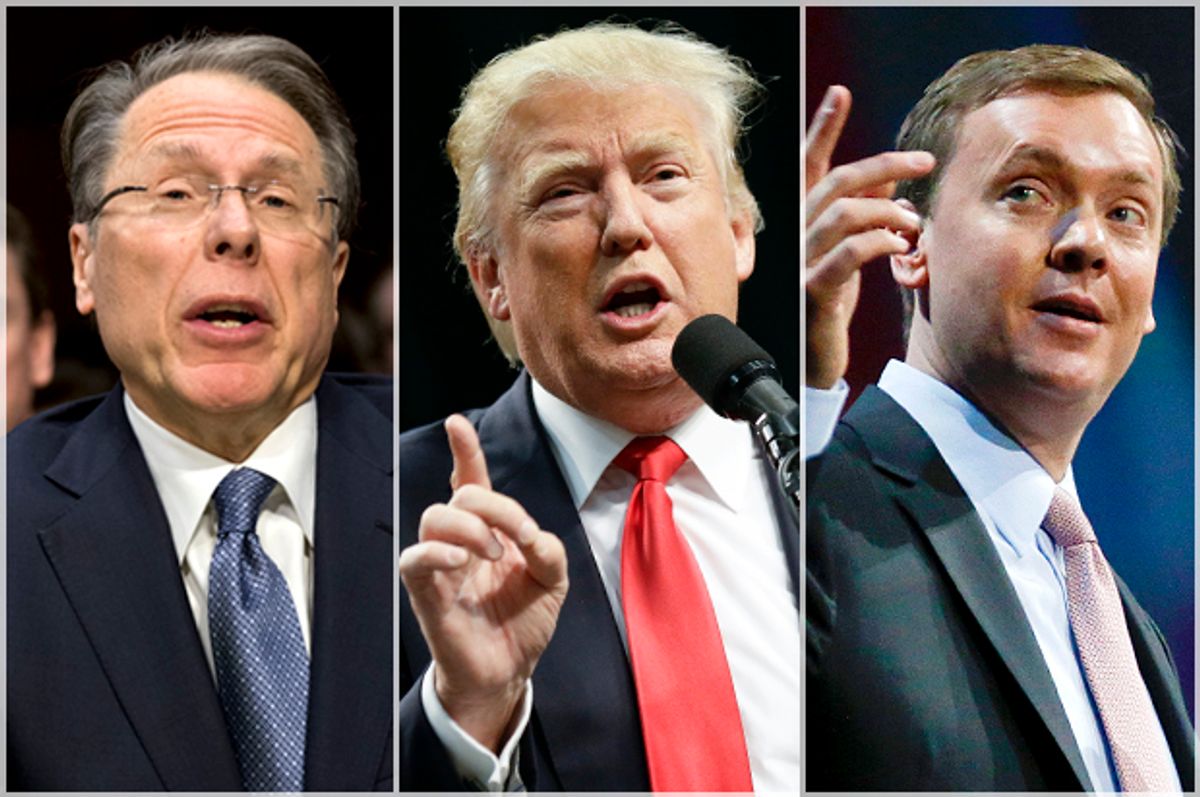 Gun industry lobbyists and apologists have long pitched the gun sales-friendly idea that "an armed society is a polite society", i.e. that the solution to gun violence is more gun violence.

Indeed, one of the ways the gun industry has turned mass shootings into marketing opportunities is to blanket the airwaves with lobbyists and pundits claiming, after any mass shooting, that if only more people would give gun manufacturers money arm themselves, then this tragedy could have been prevented.

But the arm-everyone-to-prevent-shootings script is running across a massive roadblock in the aftermath of the Orlando shooting: At 2 a.m at your average dance club, nearly everyone in the joint that isn't there working is drinking. And it really goes counter to the NRA's invocation of the mythical "responsible gun owner" to start telling people to get all liquored up before they start shooting off guns. (Though, in practice, that is exactly what many of the so-called "responsible gun owners" of America do, all the time, as this native Texan can tell you.)

These facts were already making things uncomfortable for the gun lobby, even before Donald Trump opened his brainless mouth and started spouting off. Being a parrot who spouts right-wing talking points without any regard for the actual content and whether it makes sense, Trump was all about the "good guy with a gun" pandering last week.

On June 13 on CNN: "And by the way, if you had some guns in that club the night that this took place, if you had guns on the other side, you wouldn’t have had the tragedy that you had."

On June 15, at a campaign rally: "If some of those great people that were in that club that night had guns strapped to their waist or strapped to their ankle, and if the bullets were going in the other direction, aimed at this guy who was just open target practice, you would’ve had a situation folks, which would have been always horrible, but nothing like the carnage that we all as a people suffered this weekend."

On June 17, at a campaign rally: "If we had people, where the bullets were going in the opposite direction, right smack between the eyes of this maniac — if some of those wonderful people had guns strapped right here, right to their waist or to their ankle, and this son of a bitch comes out and starts shooting, and one of the people in the room happened to have it, and goes boom — boom — you know what? That would have been a beautiful, beautiful sight, folks. That would have been a beautiful, beautiful sight. So don’t let them take your guns away."

There is no doubt, especially with that "take your guns away"and "those great people that were in the club" remarks that Trump is suggesting that people who plan to go out drinking should be carrying loaded weapons. You know, for "safety."

NRA officials have been trying to clean up after Trump, but the effect only drives home the point that gun lobbyists haven't really thought very deeply about the "guns everywhere" philosophy, beyond knowing that it will pad out profits for gun manufacturers.

“What Donald Trump has said is that the American people know as common sense, if somebody had been there to stop this faster, fewer people would have died,” Chris Cox of the NRA said on ABC on Sunday, seeming to back Trump's plan of arming drunk people for "safety."

But when pressed on whether it's really a great idea for inebriated people to be our first line of defense against murderous criminals, Cox backed down: "No one thinks that people should go into a nightclub drinking and carrying firearms. That defies common sense."

Except that he just said that Trump's suggestion that customers at the bar carry weapons was also "common sense."

No doubt Cox would triangulate further by saying that he means that sober people in bars should carry weapons. That's the way that Trump is trying to frame this confusing, contradictory guns-in-bars-wait-no-guns-in-bars gambit, by saying he meant that employees should have guns. (Which is obviously a lie, because his comments quite clearly were in reference to customers.)

The problem with the "uh, we meant sober employees" gambit is that Pulse had already taken this suggestion into account. They did have a "good guy with a gun" on premises, and not only was he sober, he was an off-duty police officer, presumably with far more training in weapons far beyond what a civilian usually would have.

"On June 12, 2016, just after 2 a.m., an Orlando Police Officer working extra duty at the Pulse Nightclub, located at 1912 S. Orange Ave., responded to shots fired," the police department revealed in a press release. "Our officer engaged in a gun battle with that suspect and the suspect went deeper into the club where more shots were fired."

But the NRA isn't going to let the fact that there was a "good guy with a gun" on premises disrupt their incoherent narrative. Wayne LaPierre, echoing Cox, went on CBS and made a similarly self-contradictory statement.

"I don't think you should have firearms where people are drinking," LaPierre said on "Face the Nation". "But I will tell you this. Everybody, every American starts to have -- needs to start having a security plan. We need to be able to protect ourselves, because they're coming. And they're going to go for vulnerable spots, and this country needs to realize it."

So a bit of ass-covering about how you probably shouldn't be carrying while drinking, before a direct pivot to the talking point about how guns-everywhere is the solution. LaPierre's comments are an incoherent mess. You can't both have "every Americans" carrying a gun while denying that currently drunk Americans should not be carrying a gun. Unless the NRA's plan is to start pushing for a return to Prohibition, the category "everybody" will, at times, include people who have consumed alcohol recently.

But NRA officials know that. They just don't really care. The main purpose of the "guns everywhere" ideology is not and never has been about keeping people safe. It's about using fear to sell guns.

If the danger of terrorism really is as serious as LaPierre claims it is, then the actual solution would be for Americans to restrict their movements, refusing to go into public places for fear of being shot. But no one actually wants to do that. As Peter Eavis at the New York Times writes, people say they are afraid of terrorism, but their behavior suggests they realize that the odds of being attacked are still very low. Americans still travel, go to clubs and games, and generally carry on in a way that demonstrates that they aren't really afraid or think they need a "security plan" just to go about their daily business. That's not how people who actually think "they're coming" behave.

If the NRA was actually concerned about safety, they would offer a more full-throated rejection of the idea of guns in bars, instead trying to come up with some complex argument for why some guns in some bars is a good idea. (LaPierre's latest gambit is to suggest that as long as food is also served, then that somehow makes the gun + alcohol mix safer.) But "fear" is just a marketing tool. For the NRA, it's about selling more guns. For Republicans, it's about selling tough guy posturing. But it's never about taking actual measures to keep people safe, because any suggestion that has a chance of actually working — such as making it harder to get weapons capable of mowing down a room full of people in minutes — gets rejected out of hand.