The Militia Myth: Why an armed citizenry isn't the best defense against state tyranny

Gun advocates fancy themselves champions of the Constitution. They misunderstand and abuse the Second Amendment 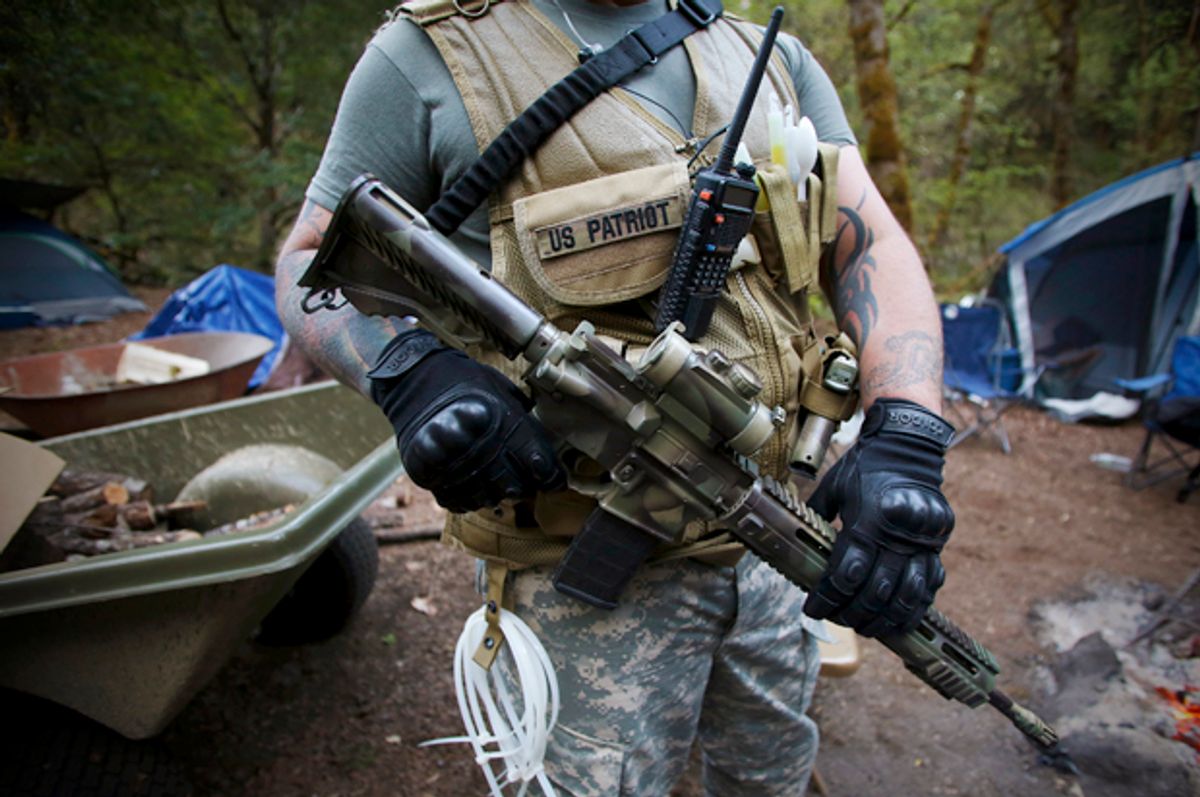 The Second Amendment is all the rage this week, thanks to yet another mass shooting in an American city. The NRA responded, as they always do, by reflexively denying that access to guns has anything to do with gun crimes. Republicans in Congress held an obligatory moment of silence on the floor, a perfectly meaningless gesture when it's not followed by action. Senate Democrats filibustered for 14 hours in order to hold a vote on two gun control measures. In the end, it's doubtful much will change.

I consider the Second Amendment a misinterpreted anachronism, badly in need of revision. I don't believe we should ban guns, however, and I accept that the Second Amendment is defensible. The unfortunate reality is that we live in a country in which there are more guns than people, where the soft targets outnumber the hard ones. Self-defense is therefore a legitimate concern. So long as the guns are on the streets and criminals have access to them, law-abiding citizens deserve the right to protect themselves.

But defenders of the Second Amendment often rely on another justification. The argument, simply stated, is that the right to bear arms exists to protect the people from a tyrannical government. It's “the ultimate check against governmental tyranny,” as Ted Cruz recently put it. There's a superficial logic to this claim, but it doesn't survive scrutiny. First, a “well-regulated” militia, the alleged mechanism of this check, is to be controlled by Congress according to the Constitution. States are allowed to appoint officers and train the militia, but Congress is given unfettered authority over it. So the “well-regulated” militia clause is not intended as a “check against governmental tyranny.” On the contrary, it's an instrument of state power.

But what about the practical argument that an armed citizenry is the best way to keep the state at bay? This, too, is false, and there is plenty of data to prove it.

There's an assumption that political power and violence are equivalent; that force is always and everywhere the most reliable means of achieving a political outcome. It's true that violence is occasionally necessary (in a geopolitical context, for example), but how useful it is varies considerably. Understanding the constituents of power is critical. Gene Sharp, a pioneer of strategic nonviolence, defined political power thus: “The totality of means, influences, and pressures – including authority, rewards, and sanctions – available for use to achieve the objectives of the power-holder, especially the institutions of government, the State, and groups opposing either of them.”

What's crucial about this conception is that political power is not monolithically grounded in the state, which almost always has a monopoly on physical force. Rather, political power is pluralistic; it stems from external sources beyond the power-holder and depends, in part, upon the consent of the governed. This is another way of saying state power is contingent. Physical violence can subdue people, but that's all it can do. And it's very difficult to rule over a people without their tacit consent or active support.

Armed individuals or even organized militias cannot defeat the United States government militarily. This ought to be obvious on its face, given the state's overwhelming advantage in terms of resources and capabilities. Gather all the AR-15s you like. If Uncle Sam decides to detain you, he will – eventually. Having a few guns will complicate things, but it won't negate the power asymmetry.

Here's why Sharp's view of power matters: If it's true that rulers depend upon the consent of the ruled, withdrawing that consent is the most effective means of displacing power. To bring the government to its knees, the people need only raise the costs of oppression. A few thousand militiamen with guns is a nuisance to organized state power, but tens of millions of people in the streets (a la Tahrir Square in Egypt) is a revolution in consciousness. Mass mobilization of that magnitude shuts down a society, renders it ungovernable. It's a complete withdrawal from the system and a way of applying power without violence. It's the people using the one material advantage they have over the state: numbers.

Scholars have tested these theories and the evidence is clear: Whether it's liberation movements, secessionist campaigns, insurrectionist or anti-regime struggles, nonviolence resistance succeeds relative to violent resistance. In 2011, Erica Chenoweth, a professor of International Studies at the University of Denver, and Maria J. Stephan, a senior policy fellow at the United States Institute of Peace (USIP), published a comparative study of 323 violent and nonviolent resistance campaigns between 1900 and 2006. What they discovered aligns perfectly with Sharp's pluralistic conception of power: “nonviolent resistance campaigns were nearly twice as likely to achieve full or or partial success as their violent counterparts” (7). And this holds across regime types and in various regions of the world.

The key to the success of nonviolent resistance is mass participation, which is the strongest predictor of outcomes. Chenowith and Stephan write: “Higher levels of participation contribute to a number of mechanisms necessary for success, including enhanced resilience, higher probabilities of tactical innovation, expanded civic disruption (thereby raising the costs to the regime of maintaining the status quo), and loyalty shifts involving the opponent's erstwhile supporters, including members of the security forces” (10). To employ violence against the state is to fight on its terms. To do this conventionally is suicidal, but even the use of guerrilla or unconventional tactics proved less effective than civil resistance. And the reason is simple: there are fewer barriers to participation in nonviolent campaigns, which means more bodies involved and maximum leverage over the state.

The explanations proffered by Chenowith and Stephan are rich and beyond the scope of this article. It's worth reading in full. The takeaway is that our intuitions about power and violence are misleading. There's no doubt that violence is inextricably linked to power, but violence is not always the best way of defending liberty or achieving a specific political outcome. There are other ways of doing politics – that's too easily forgotten in these discussions.

To circle back to the main point, the guns-as-a-defense-against-state-tyranny argument simply doesn't hold up. There's a serious and difficult conversation to be had about guns in this country, but this notion that citizens will become the playthings of government without their pistols and AR-15s is untrue, ill-considered, and contradicted by a mountain of evidence. A mobilized populace devoted to withdrawing its consent is more powerful than a fragmented one committed to violence.