Trump courts the homophobes: He says he stands with LGBTs, but now he's meeting with anti-gay Christian leaders

Trump claims he is a friend to the LGBT community, yet he's having a friendly sitdown with those who demonize gays 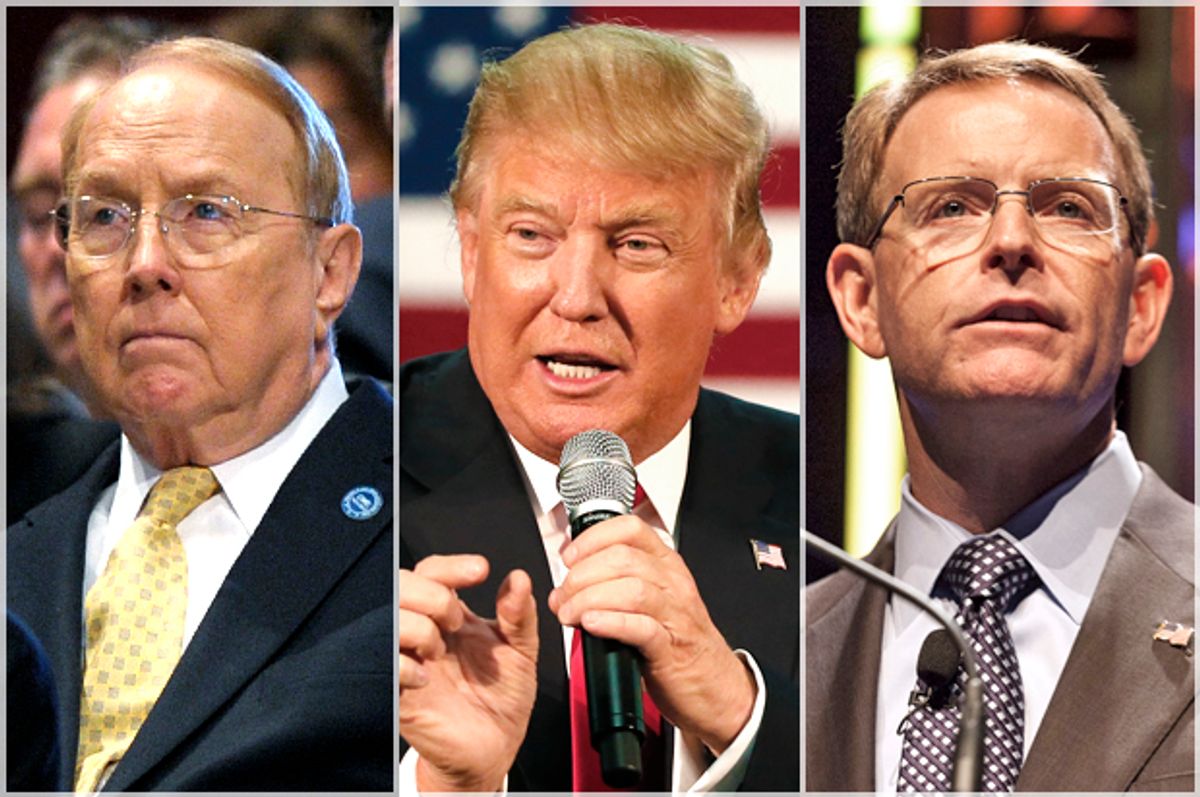 In the days after the Orlando shooting, Donald Trump has been busy positioning himself as a great champion for LGBT Americans, claiming during a speech last Monday that he, not Hillary Clinton is "really the friend of women and the LGBT community" and claiming, during the middle of last week, that the "LGBT community, the gay community, the lesbian community — they are so much in favor of what I've been saying over the last three or four days".

This is, of course, a ridiculous lie, as actual LGBT leaders hastened to make it clear that they do not support Donald Trump for president. But now there is more evidence, besides common sense, that Trump's posturing this past week is nothing but an opportunistic gambit.

Tuesday, Trump is having a closed-door meeting in New York City with a coalition of Christian right leaders, titled "A Conversation About America's Future with Donald Trump and Ben Carson." The meeting was first reported a month ago, and while the guest list has been secretive, reports indicate that it's a veritable who's who of the nation's sex police and LGBT haters, such as the Southern Baptist Convention head Ronnie Floyd and Focus on the Family's James Dobson.

KFSM out of Arkansas got a screenshot of the RSVP page, with a list of some prominent attendees. There are no real surprises on this list, which is composed of anti-choice and anti-gay heavies in the Christian right world. The Family Research Council (FRC) has confirmed they play a role in the organizing of the conference, which makes sense, their president, Tony Perkins, has been working closely with Ben Carson. This is especially troubling, as the FRC is so toxic in its anti-gay bigotry that the Southern Poverty Law Center deemed them a hate group.

Perkins is particularly fond of using demonizing, hateful rhetoric about gay people, saying they are "hateful" and "vile", and that they have an "emptiness within them" because they are "operating outside of nature".

He's also compared being gay to being a terrorist, saying that terrorism is "a strike against the general populace simply to spread fear and intimidation so that they can disrupt and destabilize the system of government" and "That's what the homosexuals are doing here to the legal system."

Despite being such a noxious bigot, Perkins gets on TV a lot, usually by toning down the rhetoric and pretending he's not a stark raving hater. But, after such the vicious crime against LGBT people in Orlando, it appears at least one network is realizing that such a bigot is not the person you want to turn to in times like these.

As Zack Ford at Think Progress reports, ABC News initially had Perkins on their list of guests for "This Week". The inclusion triggered a massive outcry from pro-gay groups, who did not think it appropriate to have someone who hates gay people on air to talk about a murderous incident aimed at gay people. The liberal Christian group Faithful America put out a petition asking ABC to drop Perkins because he "has repeatedly accused gay men of molesting children".

But it appears that Trump, despite wanting to appear friendly to LGBT people, doesn't seem to worry about how it looks to meet up with Perkins and a huge cluster of anti-gay conservatives. The Marriott Marquis in Times Square confirmed that the meeting is still scheduled for Tuesday.

As of publication time for this article, neither the Trump campaign nor My Faith Votes, which organized the meeting, have responded to requests for comment.

Ironically, the pressure last month was not on Trump to avoid meeting with anti-gay bigots, but more on these Christian conservative leaders not to meet with Trump. Understandably, many in the evangelical community are wary of tying themselves to a candidate who, for all that he claims to be a devout Christian, clearly does not darken the doors of church enough to understand even the most basic aspects of his religion.

The criticism was enough to drive Ronnie Floyd, the president of the Southern Baptist Convention, to defend himself in a May editorial for Fox News.

"While I have no intention of endorsing Donald Trump -- or any other candidate for that matter -- I believe it is incumbent upon me to learn all I can about each candidate and their platform," Floyd wrote.

Floyd added that he would "would be willing to also meet with Hillary Clinton", but there have been no efforts from Christian right forces to make such a meeting happen.

Now the shoe is on the other foot, and it's Trump who should be warier about the company he keeps.

Michelangelo Signorile of the Huffington Post wrote a piece, published June 10, warning that Trump's quiet alliances with anti-LGBT groups showed that Trump "very much will be a force against LGBT equality if elected president". That was two days before the Orlando shooting dramatically reminded the country that anti-gay bigots are not harmless cranks, and that poisonous anti-LGBT rhetoric has real consequences for real people.

Now Trump is pretending, oh so conveniently, to be a friend to LGBT people. But someone who actually cared would not have this meeting. Just as Trump is happy to exploit bigotry against immigrants, Muslims, women, and black people, he is happy to exploit bigotry against LGBT people in order to get votes. Any lip-flapping to the contrary is just more of the same old lies that Trump loves spewing.