"Brexit" is British for Trump: Why the U.K.'s anti-Europe surge should scare us 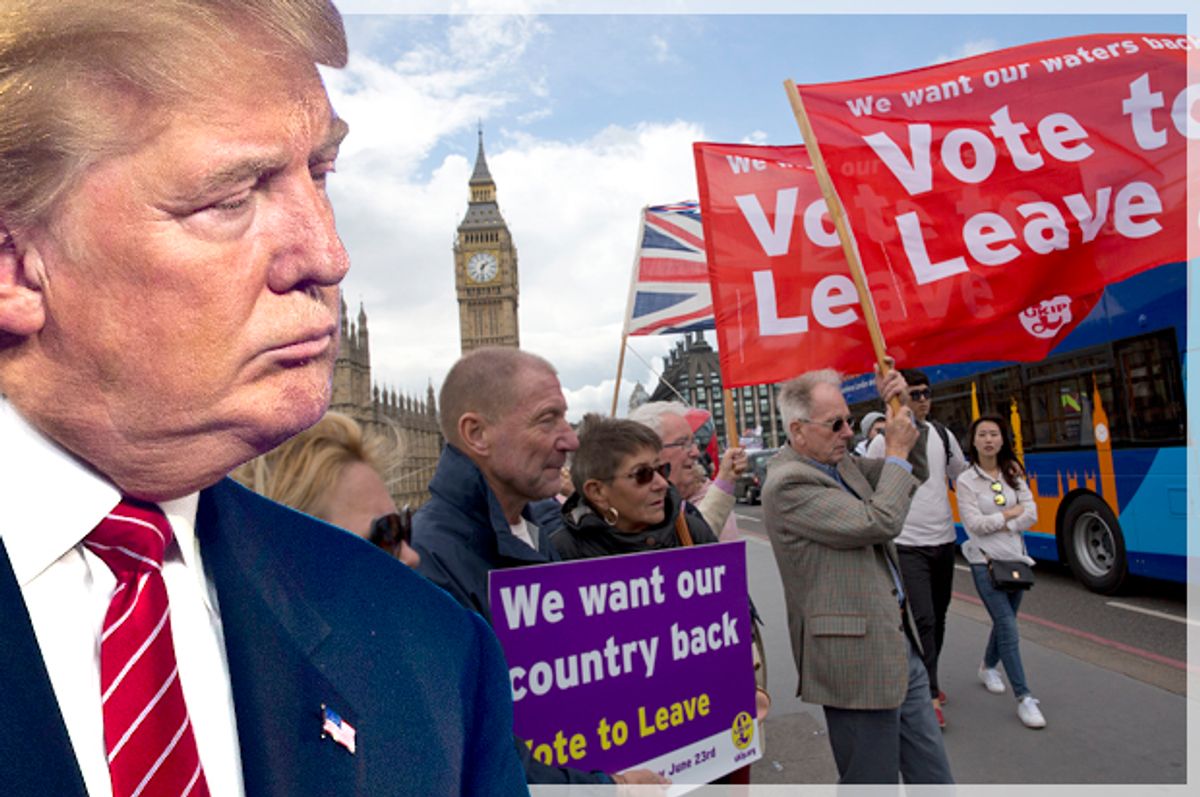 Imagine an election that purports to be about something specific but is really about larger and more amorphous questions of national identity or psychology. An election that divides the downtrodden working classes of the heartland, “Hunger Games”-style, from the educated elites of the big cities. An election that, just below the surface (or not below the surface), is a referendum on immigration policy, on racial anxieties and the fear of Islam, on a perceived loss of national stature and a yearning for a lost golden age of homogeneity and widely shared prosperity. An election in which many people on the left share many of the concerns that have energized a new populist demagoguery on the right, but feel compelled, however reluctantly, to side with the mainstream political establishment.

An election, finally, that has been irredeemably tainted by episodes of real violence, and by the threat of worse violence to come. Am I talking about the 2016 American presidential campaign, the long-running soap opera of Bernie and Donald and Hillary, whose third act is about to begin? Or am I talking about “Brexit,” this week’s unexpectedly dramatic vote on whether the United Kingdom should leave the European Union? As you have figured out by now, I’m talking about both.

Last week the Brexit campaign took an unexpected turn into American-style darkness with the murder of left-wing Labor Party M.P. Jo Cox, a Brexit opponent, apparently by a deranged British nationalist. Some Brexit supporters have actually employed the Trumpian slogan “Make Britain great again,” although you more often encounter “Let’s put the Great back in Britain,” a feeble pun on their home island’s official name. (Since you asked, Great Britain is a landmass comprising three nations — England, Scotland and Wales — that is most but not all of the U.K. OK, you didn’t actually ask.)

Despite the enormous differences in tone and content between British and American politics (and British and American culture more generally), Brexit is Trumpism translated across the Atlantic, into the slightly more polite or at least more veiled discourse of the Sceptered Isle. While Trump seems unlikely, at this writing, to be elected president, many observers now believe the pro-Brexit campaign is likely to prevail in Thursday’s referendum. No major nation has departed the E.U. since it was first created on 1958 (as the European Economic Community), and even a decade ago such an outcome would have sounded wildly unlikely. (We need to allow an asterisk for Greenland, a semi-autonomous nation of 58,000 people that bailed out over a fishing dispute in 1985.)

If that happens, it will be because the E.U. is a deeply flawed institution that is increasingly difficult to defend. It has become associated with crippling policies of economic austerity, with multiple layers of faceless and unctuous bureaucracy, with favoring multinational corporations over its own citizens, with unpredictable waves of migration and immigration and with the creation of a deeply boring and self-satisfied managerial caste capable of delivering business-school jargon in five languages. It has delivered on few or none of its grand promises of universal social justice and shared prosperity. (Although, to be fair, economic inequality is many orders of magnitude less dramatic in the E.U. nations than in the United States.)

While the whole question may seem distant and irrelevant to most Americans, Brexit could mark the beginning of a political earthquake that will reshape the globe. Donald Trump evidently didn’t know what Brexit was when journalist Michael Wolff asked him about it in a recent Hollywood Reporter interview, but he was in favor once it was explained to him. That’s not surprising on any level: Trump may be ignorant but he’s no dummy; he understands that President Trump plus Britain untethered from Europe represents the unraveling of the Western political order of the past six or seven decades. To the extent he believes in anything, he believes that’s a good idea.

One could just as easily turn the equation around and say that Trump is a crude American manifestation of the xenophobia, bigotry and “Little England” closed-mindedness driving the Brexit campaign. Or, more accurately, that both things are symptoms of a political and cultural crisis that has unfolded across the developed Western nations with dizzying speed, fueled by economic stagnation, the threat of terrorism and the recent influx of migrants from Syria and elsewhere. Economists and social scientists have begun using the neutral-sounding term “deglobalization” to capture the various phenomena implicated therein, from the rise of anti-immigration right-wing parties across Europe to a deep (and justifiable) popular suspicion toward free-trade agreements to the resurgence of various forms of nationalism that the E.U. was specifically designed to contain or counteract.

Like a lot of people of various political orientations — like you, probably — I’m not sure that deglobalization, considered in the abstract, is such a bad thing. If it means rejecting the consumer-capitalist fantasy of a fully globalized market for labor and commodities, which conquered the world during the “End of History” years that followed the Cold War, then sign me up. But the Trump-Brexit movement finds its alternative to that fantasy in another fantasy, a reversion to tribalism and barely concealed racism and ahistorical or anti-historical nationalist nostalgia. That’s where comparisons to old-school fascism of the Mussolini-Hitler type are not inflated, because the nature of Trump-Brexit’s popular appeal, and their sunny, upbeat and nearly content-free rhetoric, are strikingly similar to the demagoguery of the 1930s.

Indeed, by lumping together all forms of resistance to the world economic and political order sometimes called the “Washington consensus” under the label of deglobalization, the social scientists and their accomplices in the mainstream media are none-too-subtly implying a moral equivalence. If Trump and pro-Brexit Conservative Party rebel Boris Johnson and French right-wing politician Marine Le Pen represent unacceptable alternatives to the status quo, then so does the Syriza government in Greece that tried to defy Europe’s central bankers last year, or the Podemos party in Spain, which hopes to do so in the future. Do I even need to bring up Bernie Sanders, who dared to point out the naked-emperor fact that the Democratic Party had sold its soul to Wall Street and no longer represented the interests of poor people or working people below the upper middle class?

There’s a certain ironic justice at work in the possibility that the “Remain” or anti-Brexit campaign in Britain has scuttled itself by refusing to address the elephant in the room, which is that the E.U. pretty much sucks and most ordinary people hate it. You can certainly argue that perception is unfair, and that people in Britain and many other countries tend to blame the Brussels bureaucracy for larger forces it can’t possibly control, like the global economy or the United States’ incompetent foreign policy or the Syrian refugee crisis. You can argue that British mistrust of the European mainland is deeply encoded in the national DNA, going back past Henry VIII to the Hundred Years’ War.

All that is true. But as a citizen of another E.U. nation — the smaller island directly to Britain’s left — I can testify that anti-E.U. sentiment is far broader than the Brexit campaign. Membership in the E.U. has without question been an economic boon for Ireland over the last 40-odd years, producing endless amounts of highway upgrades and office-park developments. Any Brexit-style referendum in Ireland would be easily defeated, and might not get more than 40 percent of the vote. Still, Irish people complain about the E.U. all the time, for a lot of the same reasons British people do: It creates endless paperwork, it has diluted our national identity, it has filled up the suburbs with craptastic American-style tract housing and flooded the upscale property market with Germans and Italians.

During this campaign, the cosmopolitan center-left of British politics — the leadership of both major parties, Labor and the Tories, officially opposes Brexit — has slowly sunk under the heavy task of persuading voters to support an unloved institution that virtually everyone sees as somewhere between a major disappointment and a massive con game. They have largely done that by avoiding talking about the E.U. at all and focusing on the potential negative consequences of Brexit, from a near-certain medium-term recession to rapid wage and price inflation to the possibility of a Scottish counterrevolution and the ultimate breakup of the U.K. Voters in Scotland are nearly certain to back staying in the E.U., and the leader of the Scottish Nationalist Party has vowed to pursue a post-Brexit retake of Scotland’s recent independence referendum (which failed) in hopes of rejoining Europe as a separate country.

I don’t need to lean too hard on the fact that Hillary Clinton’s principal theme for the fall campaign seems to be “at least she’s not Donald Trump,” do I? The problem in the Brexit campaign, and maybe in our presidential campaign too, is that the disgruntled downscale voters of Middle England who want to stick it to the poncey Europeans couldn’t be arsed, to lapse into the vernacular, about any of that stuff. They don’t think things can get much worse for them (about which they are wrong), they are highly likely to do the opposite of whatever a bunch of Oxbridge-educated Londoners tell them to do and they don’t give any part of a crap about bloody Scotland. They have halfway convinced themselves that Estonians have taken their jobs, that the local imam wants to blow them up or at least ban Christmas and that there must be some magical pathway that leads back to the way things supposedly were in Granddad’s time. At least there hasn’t been any talk (so far) about building a wall and making the Scots pay for it. Maybe because, as every British child learns in school, the Romans tried that and it didn’t work.