How to beat Donald Trump: The simple playbook that will lead to his political demise

When the press aggressively challenges him, Trump turns into an incoherent adolescent — that will be his undoing 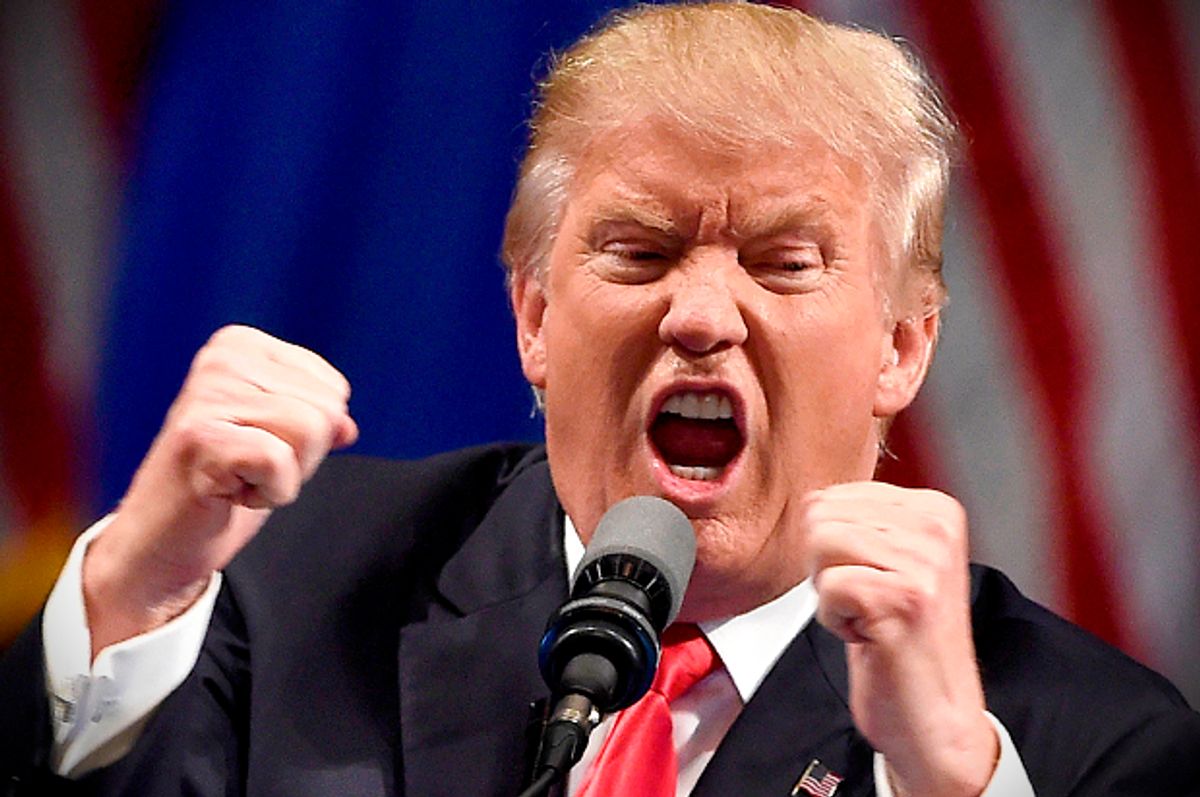 Eight years ago, Katie Couric conducted a series of interviews with the Republican vice presidential candidate, Alaska governor Sarah Palin, which marked the beginning of the end for the GOP ticket.

It’s painful to look back at these chats, but it’s also instructive. Because in the end, it was Palin who revealed herself to the electorate. Based on her own testimony, she was a stunningly ignorant candidate whose intellect appeared as garbled as her syntax.

What made Palin such a liability was that she didn’t seem to recognize her deficiencies. She was shallow and misinformed and lacked the humility to address these flaws. What you saw was what you got.

In this sense, Palin is the fairy godmother of Donald Trump, whose central appeal to voters resides not in his economic populism, or his wolf-whistled nativism, but the proud bluster of his pronouncements.

What Democrats and the media are finally starting to recognize is that Trump is not going to be defeated by appeals to truth, or decency, or ideological consistency. (His rhetoric is all pathos and no logos.) As with Palin, the candidate’s greatest liability is the candidate.

As Mark Bowden has deftly observed, Trump’s essential nature is adolescent. Beneath his glib persona, he’s vain, defensive, and terrified of being unmanned. The way to take him down is not to debate him, or fact-check him, but to rattle that fragile ego of his—to goad him.

And do so specifically in response to his greatest rhetorical vulnerability, which isn’t his exhaustively documented passion for prevarication, but his eagerness to traffic in vagary and insinuation.

Consider what Chris Matthews did to Trump during a Town Hall interview in March. He was probing Trump about his position on abortion, which used to be “very pro-choice” but was now staunchly “pro-life.”

If Trump believed abortion should be illegal, Matthews said, then how should it be punished? He asked Trump this question twice, and got the standard conservative doubletalk. But then Matthews patiently circled back to the issue, and pressed harder:

Matthews: Do you believe in punishment for abortion, yes or no, as a principle?

Trump: The answer is that there has to be some form of punishment.

Matthews: For the woman?

Trump: Yes, there has to be some form.

Trump went on to note that the men who impregnate these women shouldn’t be punished. He also admitted that outlawing abortion would lead to women seeking illegal procedures.

These are all politically disastrous statements that even GOP freshman lawmakers know to avoid.

But Trump has no such internal editor. When aggressively questioned, particularly in a public venue, his inner adolescent takes over. As this clip demonstrates, when Matthews challenges him to provide a specific answer, to “man up” when it comes to his convictions, Trump can’t resist blurting out an answer.

This is how Trump’s personality functions. If an interviewer implies that he’s dumb or timid or (worst of all) politically correct, his ego demands that he double down on whatever lunatic notion he’s defending.

Matthews, however, is one of the few pundits outside the conservative media who is pugnacious enough to get under Trump’s skin. More often, Trump treats his interlocutors like reality TV contestants or press agents. He interrupts them. He talks over them. He filibusters. He berates. He veers into non sequiturs.

Take a look at how he ran roughshod over CNN’s Jake Tapper a few weeks ago. Tapper tries to press him on his statement that Judge Gonzalo Curiel isn’t fit to preside over the Trump University fraud lawsuit because of his Mexican heritage. (“He’s a Mexican,” are Trump’s exact words about the jurist, who was born in Indiana.) Tapper gets a few words in edgewise. But for the most part he’s completely flummoxed.

Given what Trump did say, imagine what Trump might have said if Tapper refused to be silenced, if, instead, he goaded Trump by accusing him of racism, mocking his bald-faced lies, and confronting Trump with the most galling aspects of his fraudulent “university,” rather than allowing the candidate to prattle on about all his satisfied customers.

As the election progresses, the press will probably get less and less access to Trump. (That’s certainly what his GOP minders will seek to insure.) Those who do get to interview him can’t waste the opportunity. They have to come prepared to challenge Trump about specific policy issues, and the increasingly unhinged nature of his rants.

Last week, the day after the massacre that left 49 people dead in Orlando, Trump phoned his fans at Fox & Friends and said the following:

The next television reporter given the chance to interview Trump would do well to force him to explain what, precisely, he means by “something else in mind.” Is he saying the President of the United States is in cahoots with Islamic radicals? If so, why doesn’t he have the guts to say so directly? Why play word games? Is he scared? Is he being politically correct?

Because this is a big part of Trump’s whole game. In the absence of any coherent set of policies, or legislative agenda, he floats vague conspiracy theories about his enemies.

He did it in the primaries, as well, implying, for instance, that Ted Cruz’s father played a role in John F. Kennedy’s assassination: “I mean, what was he doing with Lee Harvey Oswald, shortly before the death—before the shooting? It’s horrible.”

This kind of paranoid style has a long and ignominious history in American politics. It is not only enabled, but also emboldened, by a cowardly press corp.

Those reporters afforded the chance to interview Trump need to recognize that they are not dealing with a traditional politician. Nor are they dealing with a glib lightweight like Palin. They are dealing with a kind of shape-shifting demagogue who learned his stagecraft under the tutelage of Roy Cohn, Joseph McCarthy’s right-hand man.

The deferential protocol that has traditionally prevailed when dealing with a presidential candidate will no longer do the job. Trump has to be handled like the reckless brawler he is.

Not for the sake of tripping him into a gaffe, but simply so he is forced to reveal to the American people what he actually believes. Voters will then be able to judge fairly whether these beliefs bear any relationship to their own beliefs, or to reality.