If you loved Sotomayor's dissent in the 4th Amendment case, you should be worried about a Justice Garland 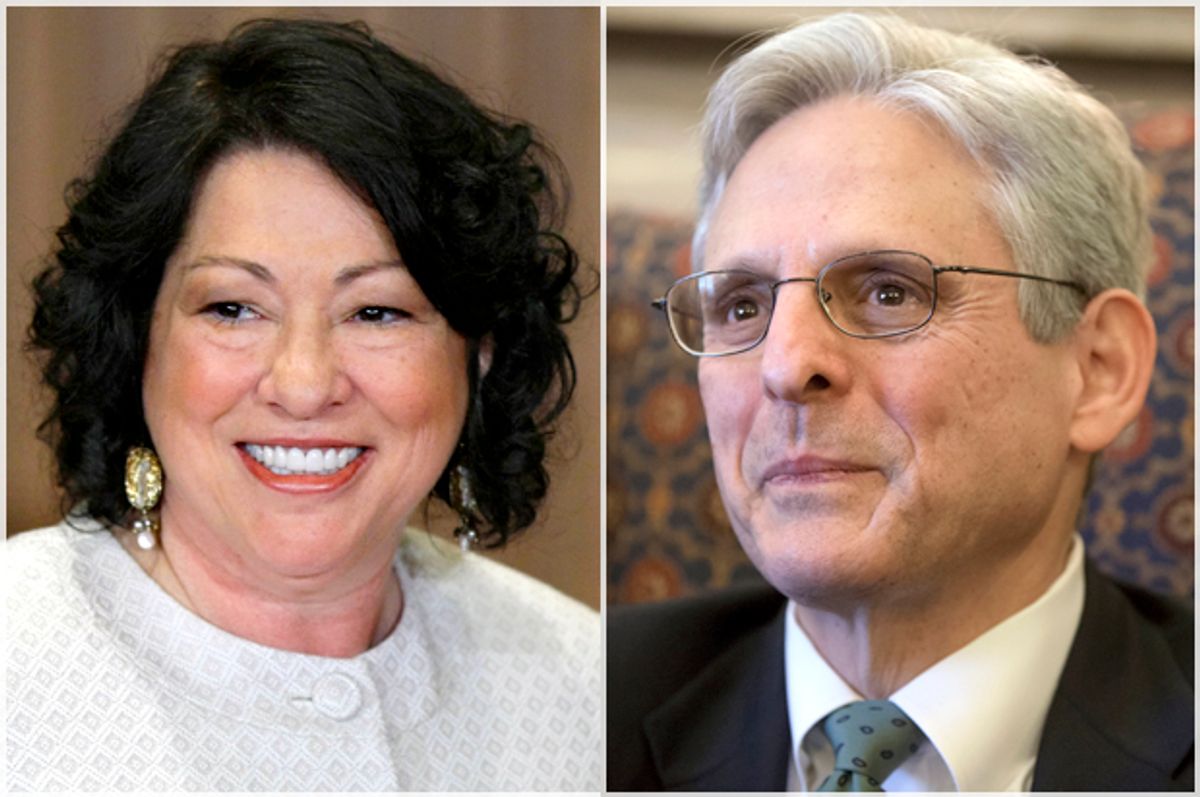 On Monday, a short-handed Supreme Court blew a giant 5-3 hole into the Fourth Amendment, effectively ruling that an illegal stop and seizure can be retroactively legalized if police determine that the suspect has an open warrant after the illegal stop but before initiating the search. This is true even if that open warrant stems from a traffic violation, as it did in the case of the defendant in Utah v. Strieff, who was discovered to be carrying methamphetamine and paraphernalia. It seems that police may now conduct illegal stops and run people for warrants, and then search them if they find one, with near impunity.

The Court’s four conservatives were joined by not-quite-as-liberal-as-you-think Justice Stephen Breyer, and Justice Sonia Sotomayor issued a vicious, and now viral, dissent. There is a lot of debate over how Merrick Garland, if confirmed to the Court, would affect its tenuous balance. It seems likely that in this case, given his track record, he would have voted with the conservative majority.

As I wrote in March, Judge Garland has tended to side with law enforcement during his tenure on the D.C. Circuit Court, including in search and seizure cases. While liberals have successfully made abortion rights a litmus test for judicial appointments, Obama’s nomination of Garland suggests that the criminal justice issues that have recently become the center of explosive protest are still of negotiable importance.

One case of note, the 2007 decision in USA v. Powell, echoes Streff. In Powell, Garland joined a majority opinion finding that a questionable police search of a vehicle uncovering a gun was constitutional. Police had witnessed two men urinating in public, and spotted an open container of suspected alcohol after peeking inside the car—which prompted them to search the car and find the gun.

The majority ruled that because the search was incident to an arrest it was constitutional, even though the arrest wasn't made initially for the public urination but only after police discovered the gun. The dissent, authored by Judge Judith Rogers, argued that the ruling “finds no basis in Supreme Court precedent or in logic and imperils the constitutional right against unwarranted intrusions,” and warned that it set forth a broad new rule that “whenever a police officer has probable cause to arrest a suspect, the officer may conduct a search incident to the possibility of a later arrest so long as the officer later ratifies the search by making the arrest.”

As SCOTUSblog's Tom Goldstein noted in 2010, “in ten criminal cases, Judge Garland has disagreed with his more-liberal colleagues; in each, he adopted the position that was more favorable to the government or declined to reach a question on which the majority of the court had adopted a position favorable to a defendant. Because disagreement among panel members on the D.C. Circuit is relatively rare, this substantial body of cases is noteworthy.”

In a passionate dissent that brought the voices of Black Lives Matter onto the nation’s highest court, Justice Sonia Sotomayor deftly explained how the Strieff ruling will incentivize police to illegally stop people of color on the correct assumption that they may have an open warrant: thanks to a criminal justice system that traps people up in its machinery for the slightest offense, including to raise revenue off the backs of the poor, many do. There are, according to Justice Sotomayor, 7.8 million open warrants listed in federal and state databases, mostly for what appear to be minor offenses.

According to the recent Department of Justice investigation into Ferguson, Missouri’s police force cited by Sotomayor, local courts had open warrants for more than 16,000 in a city of roughly 21,000. As Sotomayor notes, people are already frequently stopped for warrant checks without police having the requisite reasonable suspicion.

“Respectfully, nothing about this case is isolated. Outstanding warrants are surprisingly common,” writes Sotomayor. “When a person with a traffic ticket misses a fine payment or court appearance, a court will issue a warrant…The white defendant in this case shows that anyone’s dignity can be violated in this manner. But it is no secret that people of color are disproportionate victims of this type of scrutiny…this case tells everyone, white and black, guilty and innocent, that an officer can verify your legal status at any time. It says that your body is subject to invasion while courts excuse the violation of your rights. It implies that you are not a citizen of a democracy but the subject of a carceral state, just waiting to be cataloged.”

The exclusionary rule, often caricatured as a technicality that allows criminals to evade justice, is in reality among the best tools available to deter police from conducting unconstitutional searches. As it is, street stop and frisks are already deemed permissible if police meet the incredibly-low standard of having reasonable suspicion that criminal activity is afoot. Now, the Court has lowered that bar even further.

“Do not be soothed by the opinion’s technical language: This case allows the police to stop you on the street, demand your identification, and check it for outstanding traffic warrants—even if you are doing nothing wrong,” Sotomayor wrote with zero punches pulled. “If the officer discovers a warrant for a fine you forgot to pay, courts will now excuse his illegal stop and will admit into evidence anything he happens to find by searching you after arresting you on the warrant.”

Protecting the exclusionary rule is in everyone’s interest. As Sotomayor warned during oral argument, it’s a basic protection against living in a police state. We can’t know for sure, but a Justice Garland likely would have ruled with the majority to help gut it.