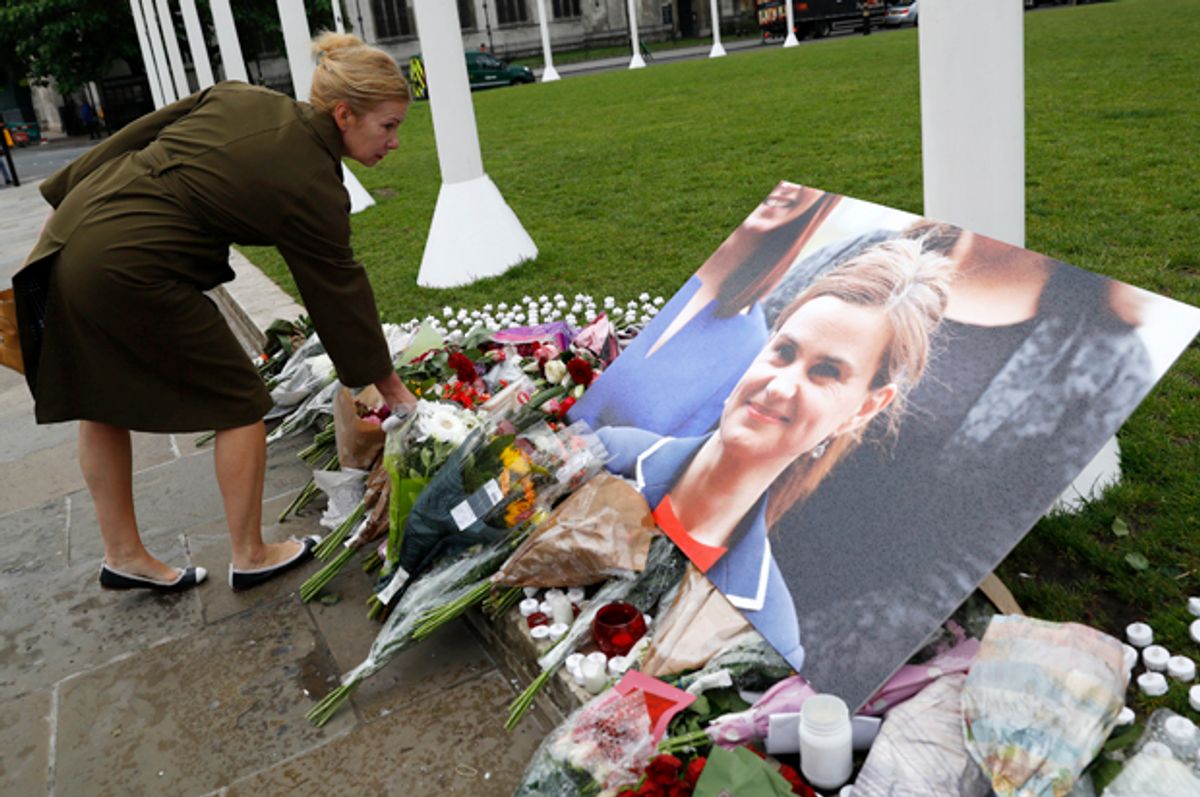 The white supremacist suspected of killing a left-wing British lawmaker last week published at two least letters in a pro-apartheid magazine, in which he demonized "White liberals and traitors," "collaborators" and "anti-apartheid morons."

"I still have faith that the White Race will prevail, both in Britain and in South Africa, but I fear that it’s going to be a very long and very bloody struggle," he wrote in 1999.

The alleged killer also attended a meeting of white supremacists in London in 2000, where he openly espoused extremist right-wing views.

On June 16, a man shouting "Britain first!" repeatedly stabbed and shot Labour Party MP Jo Cox at an event with her constituency, killing her. Cox was known for her pro-refugee and pro-immigration views.

Thomas Mair, the suspected shooter, was an avowed white supremacist and a longtime supporter of a neo-Nazi group, although British media outlets described him simply as a “loner” with a “history of mental illness.”

When Mair appeared before court, and it asked what his name was, he replied, “Death to traitors, freedom for Britain!”

The Southern Poverty Law Center, the leading monitor of hate groups, revealed that Mair bought more than $620 in books from the National Alliance, a neo-Nazi group. Among his purchases were “Ich Kämpfe,” an illustrated handbook issued in 1942 to members of the Nazi Party, and periodicals and manuals with instructions on how to build guns and make explosives.

Mair was a faithful subscriber to the pro-apartheid magazine South African Patriot in Exile, which described him as "one of [its] earliest subscribers and supporters." The Southern Poverty Law Center, the leading monitor of hate groups, obtained two letters that Mair wrote for the magazine in the 1990s.

In 1991, Mair wrote a letter railing against "the British media's propaganda offensive against South Africa," claiming, "Almost every 'news' bulletin contains at least one item about South Africa which, needless to say, never fails to present Whites in the worst possible light."

He condemned "anti-apartheid morons" and their "hatred," and said he "was most impressed" with the white supremacist magazine. Mair wrote that he had received copies of the publication from the British National Front, a white-only neo-fascist party.

"The nationalist movement in the U.K. also continues to fight on against the odds," Mair concluded. "Despite everything I still have faith that the White Race will prevail, both in Britain and in South Africa, but I fear that it’s going to be a very long and very bloody struggle."

In 1999, after apartheid had been overthrown in South Africa, Mair wrote another letter the white supremacist magazine. "It was heartening to see that you are still carrying on the struggle. I would not have blamed you if you had given up in despair," he said.

"I was glad you strongly condemned ‘collaborators’ in the White South African population," Mair added. "In my opinion the greatest enemy of the old Apartheid system was not the ANC [African National Congress] and the Black masses but White liberals and traitors."

The Southern Poverty Law Center also revealed that, in 2000, Mair attended a meeting of white supremacists in London. An informant who was present recalled that "Mair was loosely affiliated with the Leeds chapter of the National Alliance," the neo-Nazi group he supported for well over a decade.

The informant told the Southern Poverty Law Center that Mair discussed a book he had read by David Irving, a British Holocaust denier.

The informant also said that, when he mentioned Winston Churchill to Mair at the white supremacist meeting, "he kind of made a face and he referred to Churchill as a kike-loving bastard."

Once Mair "got going — i.e., discussing blacks, Jewish people and other minorities — he was what I’d call ‘all in’ — just like everyone else who attended that gathering," the informant recalled.

These revelations only further confirm "that Mair, whose alleged victim was a liberal, pro-immigrant member of Parliament, was a dedicated neo-Nazi," the Southern Poverty Law Center wrote.

At the meeting, William Pierce, the head of the National Alliance — who was barred from entering the U.K. — sent a message to the white supremacist attendees. Pierce said he would soon be releasing an electronic game titled “Ethnic Cleansing,” in which the player wins points by shooting people of color in New York City subways.