Fans of "E.T." will find much to love in this adaptation that stays true to the spirit of Roald Dahl's work 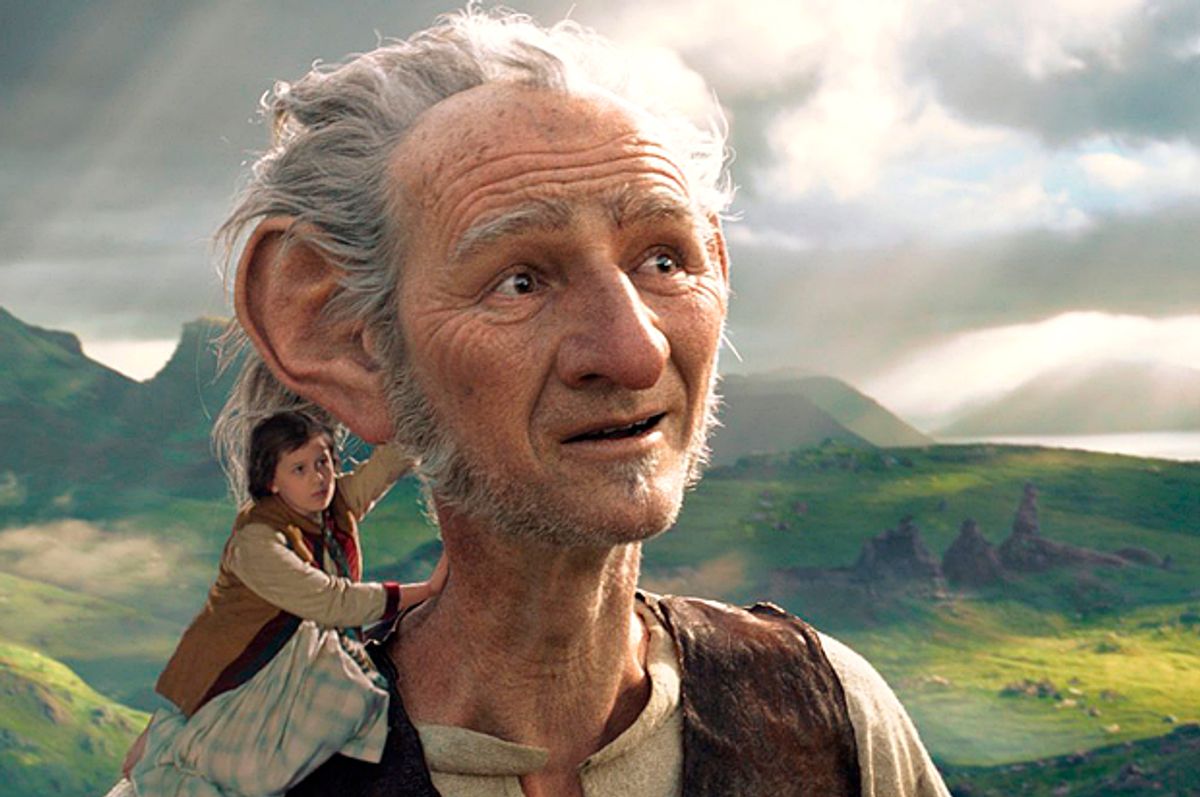 Steven Spielberg has ventured far afield from the sort of family-friendly adventures that spurred his rise to cinematic fame and fortune. He’s won two directing Academy Awards, for films about the Holocaust and World War II, and he’s made movies about other decidedly adult subjects such as Abraham Lincoln’s campaign for a 13th Amendment and the Israeli government’s efforts to avenge the Munich Olympics murders.

That the man once commonly referred to as Hollywood’s “boy wonder” has shown a propensity for these and other serious topics — to great success in movies from “Schindler’s List” to last year’s “Bridge of Spies” — can have the effect of making a film like “The BFG” seem to be yesterday’s news. Surely, one might assume, this titan of his industry and accomplished multi-tasker has better things to do than adapt a 1982 Roald Dahl children’s book about the friendship between a young orphaned London girl and the friendly giant that snatches her away after she sees him sneaking through the streets late one night.

Yet the movie plays with an unexpected sense of urgency. It stresses exactly why Spielberg remains in a realm of his own when it comes to filmmaking for families and stands out because it offers a more authentic form of nostalgia than the big-screen norm. Nostalgia, of course, is in these days. Most of the big tentpole movies during this and, well, every recent summer, are either sequels or remakes, with 2016 witnessing everything from a new “Independence Day” to the modern take on “Ben Hur” that nobody wanted, and a parade of superhero movies to add to the increasing glut. While there are plenty of worthwhile entertainments in this group, and movies like the upcoming all-women “Ghostbusters” that actually find a higher purpose for existing, as a general rule they misconstrue fidelity to source material and a series of in-jokes and otherwise sly references with genuine nostalgic spirit.

In this world, “The BFG” is an anomaly, a movie that would be all but inconceivable were it not for Spielberg’s filmmaking skills and behind-the-scenes clout. Dahl’s book has not permeated the public consciousness in the fashion of his “Charlie and the Chocolate Factory,” “Matilda” or “James and the Giant Peach.” The narrative is subdued and quiet compared to the macabre delights of gluttonous children being consumed in a candy wonderland, or a telekinetic child getting revenge on an oppressive teacher, or the surreal milieu of the inside of a gigantic peach. It doesn’t lend itself to the sort of flashy pizzazz, the slam-bang moments, ideal for a trailer or a sizzle reel.

In some respects, the movie is quite literally a relic from another time. It’s a film project Spielberg’s longtime producers Frank Marshall and Kathleen Kennedy had developed for more than two decades before it finally went into production, and its script comes from the late Melissa Mathison, who also wrote the filmmaker’s iconic “E.T.” and understood how to craft engaging family-friendly screenplays and three-dimensional children characters as well as any of her peers, though her previous film was Martin Scorsese’s “Kundun” in 1997.

The collective effect is to be freed from the tyranny of the 21st century franchise; box office expectations are not particularly high and there’s little chance we’ll ever see a second “BFG.” The movie therefore resists any pressures of modernization. It is a fairytale in every sense of the word, without any discernible opportunity for that most fundamental family movie component, one especially perfected by Disney, the movie’s distributor: product placement and endless commercial spinoffs.

It remains steadfastly faithful to the spirit of Dahl’s work and to themes that have pre-occupied Spielberg throughout his career: loneliness, the sacredness of friendship, the intersection of the magical and ordinary worlds. The familiar tropes extend to the iconic “Spielberg Face,” a close-up on a character in wordless awe as her or she considers the magnitude of what’s being witnessed, be it a collection of dinosaurs, the arrival of aliens, or, in this case, the super-sized universe of the land of the giants. Spielberg focuses less on the plot than the mood and the atmosphere of the piece, utilizing advanced technological tools to warp the perspective of regular-sized Sophie (Rudy Barnhill), as she is brought to this otherworldly milieu, and to transport the audience to the wondrous universe of the creatures, with its lush landscapes and swirling supernova bursts of light that are the movie’s representation of dreams, which the Big Friendly Giant (Mark Rylance) is tasked with capturing.

Make no mistake: This is a commercially-oriented movie, with cutting edge CGI and performance-capture effects, made by a man who has built a brand worth a reported $3.6 billion that obviously transcends his work as a director. Spielberg, in the fashion of his longtime friend George Lucas, has skillfully diversified his interests and amply cashed in on all the off-screen financial possibilities allowed by his level of sustained success. But while Lucas appears to have settled happily into a life of semi-retirement, forever talking about making “personal films”  without actually doing them, Spielberg chugs along at a considerable pace. When picking movie projects to direct, “I look for things that will scare me,” he recently told The New York Times. “Fear is my fuel.”

That’s a radical notion for a filmmaker working on this scale, even one at the top of his field and impervious to the sort of career-crippling failure that typically drives what projects are made in Hollywood. In the interview, Spielberg appeared to have been referring to the technical challenge of mounting the project, which involved elaborate set-ups to allow newcomer Barnhill to consistently work opposite Rylance rather than an empty screen, while achieving enough of a technological advance in performance-capture technology to retain as much of the Oscar winning actor’s humanity as possible under the CGI mask.

But he might as well have been referring to the narrative itself, imbued with a humanist streak that links it with “Close Encounters of the Third Kind” and, especially, “E.T.,” and stresses exactly why Spielberg’s family movies remain every bit as essential as the films that earned him a new measure of artistic credibility. The movie finds Sophie and the BFG developing a close and gentle bond after an initially hostile beginning, one characterized by their shared propensity for nonsense language and powerfully communicated in the movie’s centerpiece sequences, in which the BFG aggressively protects Sophie from his cannibalistic counterparts.

Spielberg and Mathison treat Sophie seriously, without the condescension that typically characterizes movies about children. They maintain a high regard for the honesty and earnestness of a young girl who grows to love and care for her friend no matter how big or scary or awkward he might come across, and it is that connection that carries each scene forward. There’s no higher motivation that that. There are not many films imbued with such a total lack of cynicism these days. Much as Elliot and E.T. once bicycled against the moon, in the ultimate gesture of friendship and the image that sums up Spielberg’s career perhaps more than any other, so too does Sophie step into the BFG’s large and outstretched hand for a journey directly into their shared heart.

Robert Levin is the senior editor and film critic for amNewYork. His work has appeared in Newsday, The Atlantic, The Star-Ledger and elsewhere. Follow him on Twitter @rlevin85