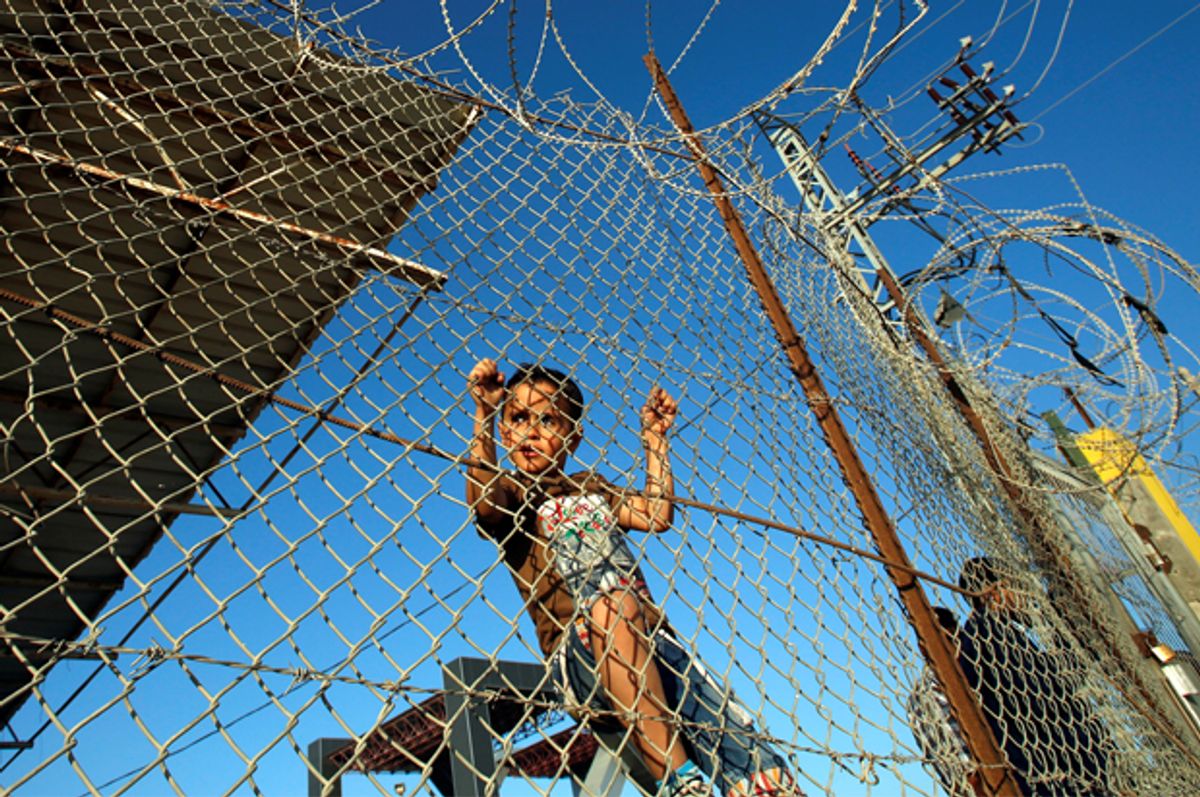 A Palestinian boy stands behind a fence in the southern Gaza Strip, May 12, 2016. (Reuters/Suhaib Salem)
--

Twenty Congress members have called on President Obama to take action to protect the rights of Palestinian children.

The lawmakers sent the president a letter on June 20, urging him to appoint a "special envoy for Palestinian youth" in order to monitor the Israeli government's violation of Palestinian children's human rights.

The letter (embedded below), notes that Palestinian children are "growing up under military occupation with very few opportunities to improve their lives."

The letter describes the occupation as "an unimaginably difficult and at times hopeless environment," where children "live under the constant fear of arrest detention and violence at the hands of the Israeli military."

Israel's illegal military occupation marked its 49th anniversary earlier this month. Nearly half, 46 percent, of the roughly 4.7 million Palestinians living in the Israeli-occupied territories are minors under 18 years of age.

The 20 lawmakers raised concerns about Israel's frequent imprisonment of Palestinian children as young as 12, sometimes without charge or trial.

According to the U.N., Israel has tortured Palestinian children and has even used them as human shields.

An April report by Defense for Children International — Palestine cited by the letter found, after interviewing 429 Palestinian children who had been detained by Israel, that three-quarters experienced some form of violence.

Minors reported being physically and psychologically abused, threatened and forced into solitary confinement. In 42 percent of cases, Israeli soldiers arrested children in their homes in the middle of the night. In 88 percent of cases, Palestinian minors were arrested and were unable to notify their parents.

"Israel has the dubious distinction of being the only country in the world that systematically prosecutes between 500 and 700 children in military courts each year," Defense for Children International — Palestine wrote.

There were 440 Palestinian minors in Israeli military prisons, as of February. An average of 204 children are held in Israeli custody each month, according to the rights group.

The letter was initiated by Rep. Betty McCollum, a Democrat representing Minnesota. Salon spoke with McCollum, who emphasized, "Military prisons for 12-year-old Palestinian children is inhuman. It totally dehumanizes them and it's an abuse of Palestinian human rights. That needs to stop."

"I want the Israeli people to have peace and security, but I also want Palestinian children and their parents to have security, dignity, justice and equality," she added.

McCollum said the letter is an important sign "that my colleagues and I care about Palestinian children and we understand that ensuring their safety and well-being will play an important role in being able to create a more peaceful Middle East."

The additional 19 congresspeople who endorsed the letter represent states around the country. Among the fellow signees are Reps. Keith Ellison, Barbara Lee, Luis Gutiérrez and more.

Ellison, a Democrat also representing Minnesota, has been particularly outspoken in support of Palestinian human rights. Presidential candidate Bernie Sanders appointed Rep. Ellison to the drafting committee of the Democratic Party in May.

Rep. McCollum said she and the other congresspeople imagine that the role of the special envoy for Palestinian youth would be to "shine a bright light on how Palestinian children are held in military in detention, sometimes in solitary confinement, on how they don't have access to their parents, let alone an attorney."

"That's just abuse that needs to come to an end," McCollum stressed. She warned that, when children are abused in this way, they grow up to feel hopeless, and that leads them to desperation.

In the letter, the lawmakers argue that the increase in violent attacks in the past year "must be examined and understood within" this context: "a life of utter hopelessness and the collective psychological trauma associated with the Palestinian people living for decades under Israeli military occupation."

McCollum told Salon that she hopes the conflict can resolve with a two-state solution. "Many people say it's too late, but I remain hopeful," she said.

Hard-line right-wing Israeli Prime Minister Benjamin Netanyahu was re-elected on the promise that there will never be a Palestinian state (although he later tried to walk back this claim, just after winning the election). McCollum said she does not have much confidence that the current Israeli government, which is very far to the right, is interested in pursuing peace with the Palestinians.

"It is very alarming," McCollum lamented, noting that the defense minister recently resigned in protest of the Israeli cabinet's increasing extremism.

In May, Defense Minister Moshe Ya'alon, a fellow member of the prime minister’s staunchly right-wing Likud party, stepped down early after Netanyahu offered the defense minister position to Avigdor Lieberman, one of the most extreme figures in Israeli politics. Ya’alon warned that “extremist and dangerous elements have taken over Israel.”

McCollum said she hopes that the next U.S. presidential administration works together with Israelis and Palestinians in order to bring an end to the occupation.

"This is about the right for Israeli and Palestinian children, and children throughout the Middle East, to grow up with an opportunity of having a safe and secure childhood, and opportunities for success," she explained.

"We need to work together to make sure that Israeli and Palestinian children don't see another 40 years of unrest and violence in their lives."

The idea for the letter was a joint project, Rep. McCollum recalled. Several lawmakers, particularly those who have traveled to Israel-Palestine and other parts of the Middle East, expressed interest in trying to help contribute to peace.

In the letter, the congresspeople also called on the U.S. State Department to elevate the human rights of Palestinian children to a priority status in its negotiations.

"These children deserve to grow up with dignity, human rights and a future free of repression," the lawmakers wrote.

The letter was supported by the No Way To Treat a Child campaign, a joint project of the rights groups Defense for Children International — Palestine and the American Friends Service Committee.

The letter can be read below.