Backing BDS: Another Pulitzer winner comes out for Palestinian rights

Viet Thanh Nguyen is the latest author to speak out in favor of the Boycott, Divestment and Sanctions movement 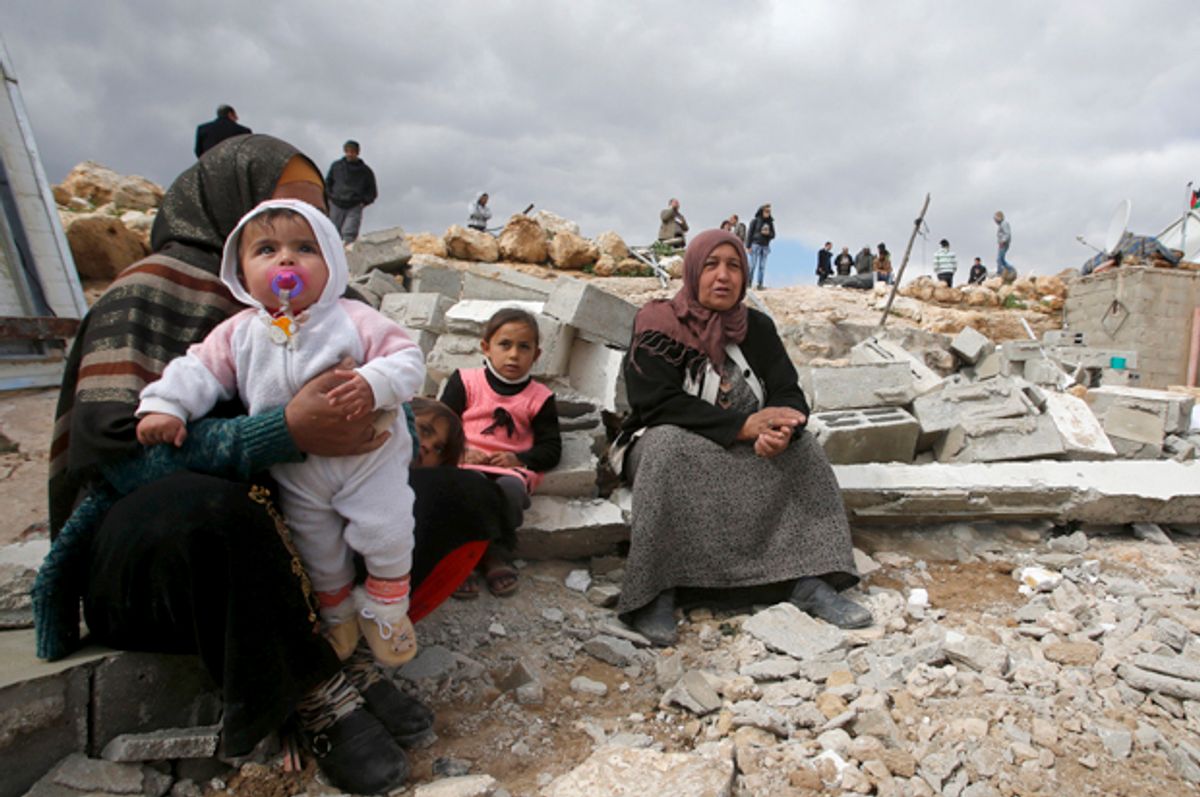 Palestinians sit among the rubble of their house, which was demolished by Israeli bulldozers, in the West Bank village of Jimba, February 2, 2016. (Reuters/Mussa Qawasma)
--

Besides the Pulitzer, his novel, "The Sympathizer," won several other prestigious awards and made it to over 30 book-of-the-year lists, including The Guardian, The New York Times, The Wall Street Journal, and The Washington Post.

The Pulitzer commendation calls the novel,  “A profound, startling, and beautifully crafted debut novel … the story of a man of two minds, someone whose political beliefs clash with his individual loyalties. In dialogue with but diametrically opposed to the narratives of the Vietnam War that have preceded it, this novel offers an important and unfamiliar new perspective on the war: that of a conflicted communist sympathizer.”

Always remember, never forget. These powerful words compel us to think about both the injustices of the past and the injustices of the present. One of those contemporary injustices that we struggle to remember is the Israeli occupation and the deprivation of Palestinian rights. For any of us concerned with justice, the imperative is clear: we must stand with the disempowered and the forgotten against militarism and the state. In April, more than 200 notable writers signed a letter of protest after a prominent organization of journalists and creative writers—PEN America—accepted funding for one of its events from the State of Israel.  Angela Davis, Louise Erdrich, Russell Banks, Deborah Eisenberg, Laura Flanders, Fady Joudah, Susan Abulhawa, and Randa Jarrar are just some of the luminaries who joined Walker, Ford, and Diaz in signing.  That same month, celebrated author Michael Chabon and several others including Pulitzer winner Geraldine Brooks, Dave Eggers, Rachel Kushner, Nigerian author Helon Habila, and Austrian writer Eva Menasse went on a tour of the West Bank sponsored by the Israeli human rights group Breaking the Silence.

PEN America describes itself as “working to ensure that people everywhere have the freedom to create literature, to convey information and ideas, to express their views, and to make it possible for everyone to access the views, ideas, and literatures of others. Together with our colleagues in the international PEN community, we have been bringing down barriers to free expression and reaching across borders to celebrate, through writing, our common humanity.”  All very laudable, indeed.  But when it accepted funding from the Israeli embassy for its “World Voices Festival” and listed it as among the “Champions” of the Festival, the letter of protest was written and sent to PEN, stating, “It is deeply regrettable that the Festival has chosen to accept sponsorship from the Israeli government, even as it intensifies its decades-long denial of basic rights to the Palestinian people, including the frequent targeting of Palestinian writers and journalists.”   Several of the signatories came forward with statements as to their reasoning.  Deborah Eisenberg, winner of the 2015 PEN/Malamud Award and the 2011 PEN/Faulkner Award used a simple and concise thought experiment to put the matter in perspective:

Two questions:  Let’s say that A is an institution dedicated to protecting the free expression of writers around the world from governments hostile to minority populations and dissenting voices, and let’s say that B is a government that is under scrutiny for the increasingly violent and even extrajudicial repression of minority populations and dissenting voices.

1) What might B gain from conspicuously contributing sponsorship to A, and what might A lose by accepting such endorsement?

Several writers stressed a point that supporters of BDS often make—the academic and cultural boycott is not against individuals, but against state-sponsored collaborations.  Thus individuals are free to work together, travel, attend conferences.  Gillian Slovo, former President of English PEN 2010-2013, pointed out that in this respect the BDS boycott is much more accommodating of individual artists and scholars than was the South African anti-apartheid boycott: “I watched how the cultural boycott on South Africa successfully put pressure on ordinary white South Africans to think about what their government was doing in their name. This request for solidarity from Palestinians is more sophisticated than the South African boycott ever was: instead of censoring individual artists it asks for a refusal of money from the Israeli state. Let PEN America invite as many Israeli writers as it wants to - just make sure that the people who pay their fare and their living expenses are not part of a state that systematically breaks international laws.”

Upon receiving the letter, PEN America director Suzanne Nosel told a delegation of writers that the letter raised “legitimate concerns” but said PEN could not consider returning the money and that there was within PEN a strong reaction against the word “boycott.”  Given the many statements supporting freedom of expression on the PEN America website, this comes as no surprise.  Some boycotts might in fact include actions that threaten freedom of expression.  But it’s hard to imagine that the protection PEN legitimately extends to writers exercising their free speech should be extended to a repressive state wishing to, as Eisenberg says, score a public relations point.

In that same month of April, PEN in fact urged Enrique Iglesias to boycott Azerbaijan because of its treatment of political prisoners.  Charlotte Silver’s article, “PEN’s double standards over Israel boycott,” details this and several other cases where PEN had no trouble at all in calling for protest and boycotts against other states. But here we find once again the “Palestine exception,” wherein freedom is to be championed for all, except Palestinians. In this “exceptional” world, freedom takes the form of protecting the freedom of the oppressors of Palestinians to act with impunity.

However, when people actually travel to places like the West Bank, where the true nature of the Occupation is graphically available, it is impossible to maintain that exception, at least not for any person endowed with a sense of morality.  Reflecting on the time he spent in the West Bank, Michael Chabon said flatly, “Once you see for yourself, it is pretty obvious, I think, to any human being with a heart and a mind, it is pretty clear what to feel about it. It is the most grievous injustice I have ever seen in my life.”  In the same interview he goes on to say:

As a Jew and someone who has felt connected both to Israel and also to the Old Testament narratives, it actually does mean something to me to be in Hebron, to be where supposedly Abraham, Sarah, Isaac, Jacob, Rebecca and Leah are all buried. From my point of view, to see that place being dishonored and made less sacred and less holy by the presence of this incredibly cruel and unjust machinery, some literal machinery and figurative machinery of oppression, it offends me…

I have seen bad things in my own country in America. There is plenty of horrifying injustice in the U.S. prison system, the "second Jim Crow" it is often called. Our drug laws in the United States are grotesquely unjust. I know to some degree what I am talking about. This is the worst thing I have ever seen, just purely in terms of injustice. If saying that is going to lose me readers, I don’t want those readers. They can go away and never come back.

Back in 2007, Pulitzer Prize winner Alice Walker made her own commitment to BDS and also drew the parallel to the Jim Crow South:

What would [the Civil Rights bus boycott] look like, be like, today, in this situation between Palestine and Israel? … It would look like the granddaughter of Rosa Parks, the grandson of Martin Luther King…. It would be to support Boycott, Divestment and Sanctions (BDS) against Israel to End the Occupation of Gaza and the West Bank and by this effort begin to soothe the pain and attend the sorrows of a people wrongly treated for generations. This action would also remind Israel that we have seen it lose its way and have called to it, often with love, and we have not been heard. In fact, we have reached out to it only to encounter slander, insult and, too frequently, bodily harm.  Disengage, avoid, and withhold support from whatever abuses, degrades and humiliates humanity.

It is precisely these sorts of ethically and morally driven acts of the imagination that these writers are engaged in, to, as Nguyen says, “always remember, never forget.”  To abandon our consciences once we have gained freedom and rights, and abandon those who have yet to achieve them and are being denied the means to do so, is a sign of moral poverty.  Conversely, to give witness to that suffering and disengage from the machinery that is perpetuating that misery is the job these and other artists are undertaking.