The press has not done its job: 3 ways the media has failed our democracy in covering the election 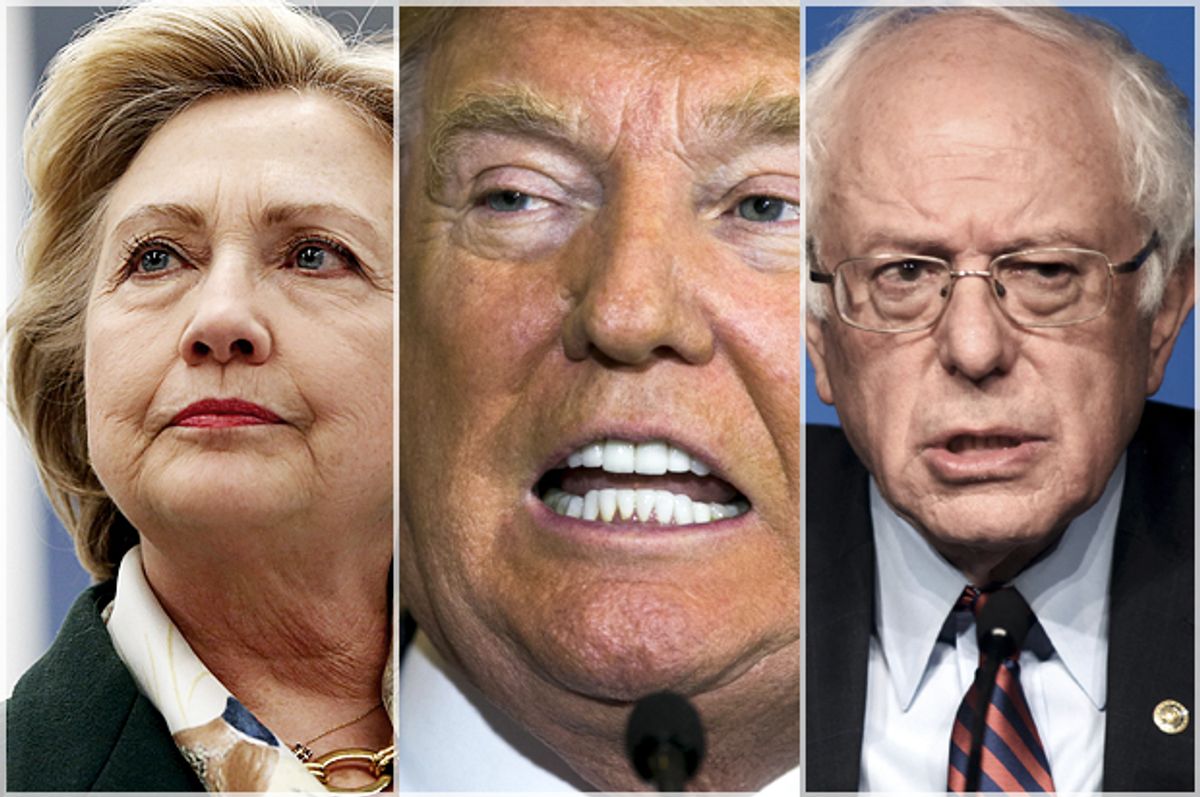 Very few of us are inclined to consider the mainstream news as a source of real knowledge these days. In fact, numerous studies have documented the egregious ways that the media has failed the public since 9/11.

In one example from 2003, the Program on International Policy Attitudes (PIPA) at the University of Maryland reported on public misperceptions about the Iraq war and found that there was an astonishing level of disinformation in the U.S. public.  Half of those surveyed believed the lie that Saddam Hussein had worked closely with al-Qaeda.

Most research, including the PIPA study, has also shown that the misinformation is slanted  — with Fox News viewers among the least informed.

One study even suggested that those who consume no news whatsoever were more knowledgeable than Fox News viewers.

But whatever your thoughts on the shortcomings of the news it has to be made clear that the 2016 election has taken the pitiful nature of our news media to new lows. I’ve written extensively about the disasters of Fox News -- it's lying, partisanship, and cult-like following.  But that's not really the story here. If anything the weird feud-love fest between Trump and Fox News has offered rare, albeit brief, moments of sanity, such as the initial battle between Trump and Megyn Kelly.

Instead, the story of media failure comes to us from those mainstream sources we thought had some semblance of balance and reason: Outlets like CNN, MSNBC, the New York Times, the Washington Post, and the Associated Press.  I suspect we will be unpacking the failures of the media to inform our citizenry for months to come. But for now, here are three highlights.

A new report from Harvard Kennedy School’s Shorenstein Center on Media, Politics and Public Policy analyzes news coverage of the 2016 presidential candidates in the year leading up to the primaries.  The report documents the fact that major news outlets covered Donald Trump at a level that was incommensurate with his experience, base of support, and initial polling.

They also show that despite the fact that Trump consistently rattled off bigoted, crazy, and inflammatory statements, that most of the coverage was “good press.”  They conclude that the biased media coverage of Trump was directly responsible for propelling the candidate to the top of the polls.  In their view, Trump is “the first bona fide media-created presidential nominee.”

As if that weren’t maddening enough, the same report documents how Bernie Sanders was badly hurt by media neglect early in the race, when candidates unknown to many voters need to establish credibility and build a base of support. Hillary Clinton received three times more coverage than Sanders in summer 2015, during the period of pre-primary debates.

Even as late as August 2015, two in five registered Democrats said they’d never heard of Sanders. Early coverage of Sanders, when it existed, suggested he was a loser before he had even started.

Even worse, as US Uncut reports, only 7 percent of the media’s reporting on Sanders was about his issues, whereas 28 percent of Clinton’s coverage was issue-focused.  The one benefit to Sanders they found was that the low media coverage also meant less negative reporting than for the Clinton campaign.

According to US Uncut, “The Shorenstein Center’s study should vindicate supporters of Bernie Sanders and non-Trump Republican candidates alike, as it proves the media’s inherent bias in covering the billionaire real estate developer and the former Secretary of State for the purpose of driving ad revenue and clicks rather than for the purpose of informing the public.”

Counting Votes Before They’ve Been Cast

To scoop election results, news outlets rely on exit polls and early returns to project winners. Such practices have been shown to have a clear impact on turnout: Why vote if the race is already over?

Many news outlets have explained that they don’t need to protect voting when the outcome is already clear.   David Plotz, editor of Slate, stated back in 2008 when the issue came up, “We will call it when a sensible person — not a TV news anchor who has to engage in a silly pretense about West Coast voters — would call it.”

The catch, though, is the tension between wanting to report news and wanting to protect our democratic traditions.  It’s worth remembering the 1980 race between Ronald Reagan and Jimmy Carter when networks called the race for Reagan shortly after polls closed on the east coast.  Voter turnout in California that year dropped by about 2 percent.   There is clear evidence that calling races early has a negative effect on turnout.

But this early race calling in 1980 is all very quaint in the face of what has happened this election. This time we witnessed a race called before any votes had been cast.

On June 5, the Associated Press called the Democratic nomination for Clinton based solely on the interviewing of super delegates, who do not cast their votes until the Democratic Convention on July 25.

Throughout the entire Democratic primary we have all seen the super delegates added like frosting on the top of Clinton’s pledged delegate count. From the beginning, Clinton’s lead with superdelegates has given her the “presumptive” edge over Sanders.

As Branko Marcetic of In These Times reports the superdelegate system was created in 1982 in response to the decisive electoral defeats of George McGovern in 1972 and of Jimmy Carter in 1980.

There is clear evidence that the superdelegate system was created as a counterforce to the will of voters. According to Marcetic, “When a Sanders supporter criticized superdelegate Howard Dean for sticking with Clinton despite Sanders’ landslide victory in Vermont, Dean tweeted back: “Superdelegates don’t ‘represent the people’ … I’ll do what I think is right for the country.”

If that doesn’t sound like democracy to you, that’s because it is a textbook case of oligarchy.

Rather than get into the muck of party politics, my goal here is to point out the media’s collusion with this system.  The mainstream news media basically lapped up the narrative that Clinton was bagging pretty much all of the super delegates and the Associated Press call was simply more of the same.  AP reported, Clinton captured “a burst of last-minute support from superdelegates.”

As Bill Boyarsky reports for Truthdig, “The story was not just a scoop. It fed the hostility and cynicism of Sen. Bernie Sanders’ fervent supporters.”  Boyarsky also points out that the decision to call the race the day before voters in California, New Mexico, New Jersey, Montana, North Dakota, and South Dakota were set to vote constitutes one of the most outrageous breaches of news media ethics we have witnessed in our nation’s history.

What’s worse is that after the AP call the rest of the mainstream media jumped right in, ready to get in the game.  We could only count on alternative news and satire news, like that of Lee Camp on Redacted Tonight, to remind the public that the super delegates don’t vote until July 25. (Watch his entertaining coverage here.)

The reality, as this video made by Matthew Cooke for Election Justice USA makes clear, is that when AP decided to call the race based on phone calls to super delegates, they influenced the election.

And if you’re skeptical that the AP call made a difference, consider that MSNBC’s  Chris Matthews literally told Sanders campaign manager Jeff Weaver that he knew that a number of major media outlets planned to call the race early. His question to Weaver, if you can believe it, was which supporters would be more likely not to turn out—Clinton’s or Sander’s.  He completely conceded the fact that the call would suppress voting.  What should really worry us is that the Matthews claim caused no pushback—not from voting viewers nor from the press.

If I haven’t convinced you yet that the real clown car of this election has been the mainstream news media, then consider this: why have we seen almost no coverage of any kind of the allegations of election fraud?  Isn’t one of the first signs of a free press intrepid reporting?  How can our news media be missing the one story that is affecting all voters?

As Cooke’s video makes clear, we have an almost endless story of election concerns. From old voting machines, to reduced polling places, to inaccurate ballots, to registered voters being dropped, to impossibly long lines, to uncounted provisional ballots the examples of ways our democracy has been hamstrung abound.   Camp’s satire news show is one of the very few that has covered the lawsuits being filed that allege election fraud in California.

Evidence of something going terribly wrong hit hard after reports came in from Arizona and New York of a range of ways that eligible voters were not able to vote.  The mess in Arizona took place in March 22—but we still have yet to see any serious mainstream reporting on it.  US Uncut lists 5 clear problems and Truthdig reports that Arizona Secretary of State Michele Reagan admitted that wrongdoing occurred.  And that was just the beginning.  New York was arguably worse. We have a list of states where similar problems occurred.

Rather than cover this story, the mainstream media has suggested that cries of election fraud are the lunatic ravings of Sanders supporters who live in a paranoid world of conspiracies.

But here’s the thing. Technically we should all be in favor of a free and transparent election process. Regardless of party or candidate, if we have any commitment at all to the concept of democracy, then we should want everyone to have a chance to vote. While it seems clear that there is little chance of “unifying” a party that does not equally support election integrity, it is also time to ask whether our news media is radically dividing us as well.

The news media was once considered the fourth estate, the watchdog over the power elite. We then used to talk about the fifth estate—the watchdog of the watchdogs. But there is little happening in the mainstream news that has any real connection to news integrity today.  Maybe it’s time to consider that it’s gone from watchdog to lapdog.