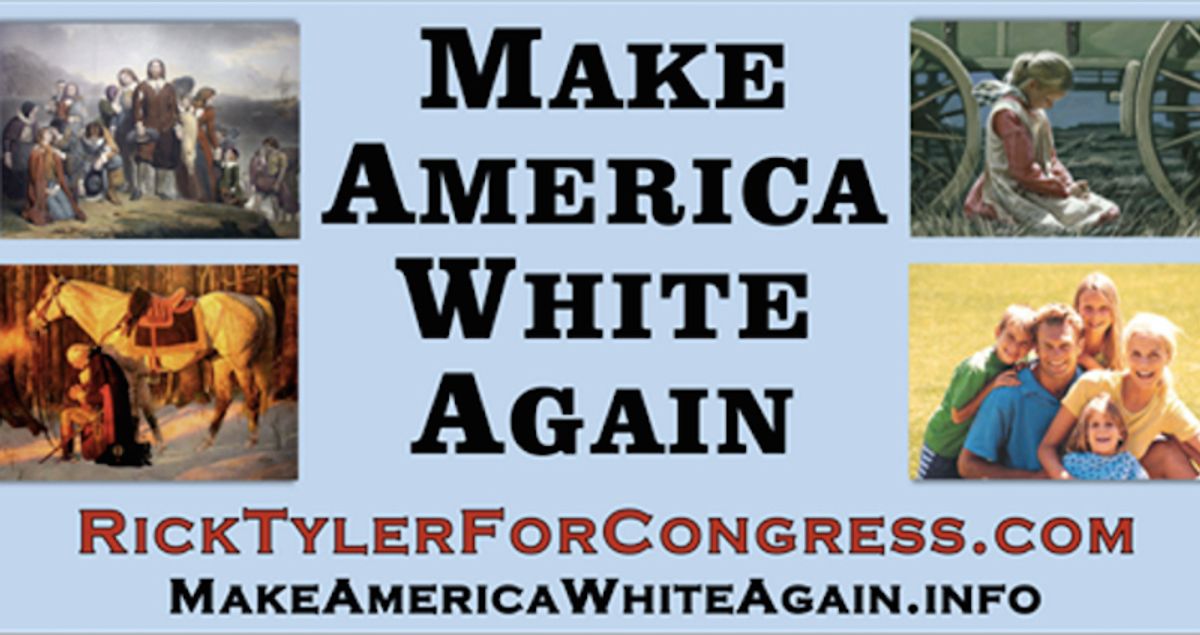 Rick Tyler, the owner of Polk County's Whitewater Grille and a long shot candidate for Congress, credited Trump's campaign with creating the environment to advertise such a provocative statement.

"Clearly we are in uncharted waters, in that there has never been a candidacy like this in modern political history," Tyler explained on his website (which appears to be down, but you can view a cached version here.) "Of great significance, as well, is the reality of the Trump phenomenon and the manner in which he has loosened up the overall spectrum of political discourse":

The Make America White Again billboard advertisement will cut to the very core and marrow of what plagues us as a nation. As Anne Coulter so effectively elucidates in her book, Adios America, the overhaul of America's immigration law in the 1960's has placed us on an inevitable course of demise and destruction. Yes the cunning globalist/Marxist social engineers have succeeded in destroying that great bulwark against statist tyranny the white American super majority. Without its expedited restoration little hope remains for the nation as a whole.

Tyler explains that the Trump-inspired "Make America White Again" is one of several billboard ideas, including some with slogans like "Fight federal tyranny / Stop the Muslim invasion," and "Mamas, don't let your babies grow up to be miscegenators." Tyler currently has a second sign erected on Highway 64 with Dr. Martin Luther King Jr.'s famous "I Have a Dream" quote written over a White House surrounded by Confederate Flags. The local Kiwanis Club then followed with an announced boycott of Tyler's restaurant:

When asked about the controversy his billboard has caused, Tyler told WRCB that he does not hate people of color, but that he wants to "restore the demographic to the America that was prevalent in the mid-1960s"

"(The) Leave it to Beaver time when there were no break-ins; no violent crime; no mass immigration, no Muslim sleeper cells lurking," he told the news station. "[A] better America"

"I respect their right to have an opinion," Tyler said of his protesting neighbors. However, "I believe the majority of the people in the county like it."

"I saw people taking pictures beside it right after I posted it," he added.