Spoilers ahead for "Orange Is the New Black" S4, in which new prisoner Judy King shakes up the privilege pyramid 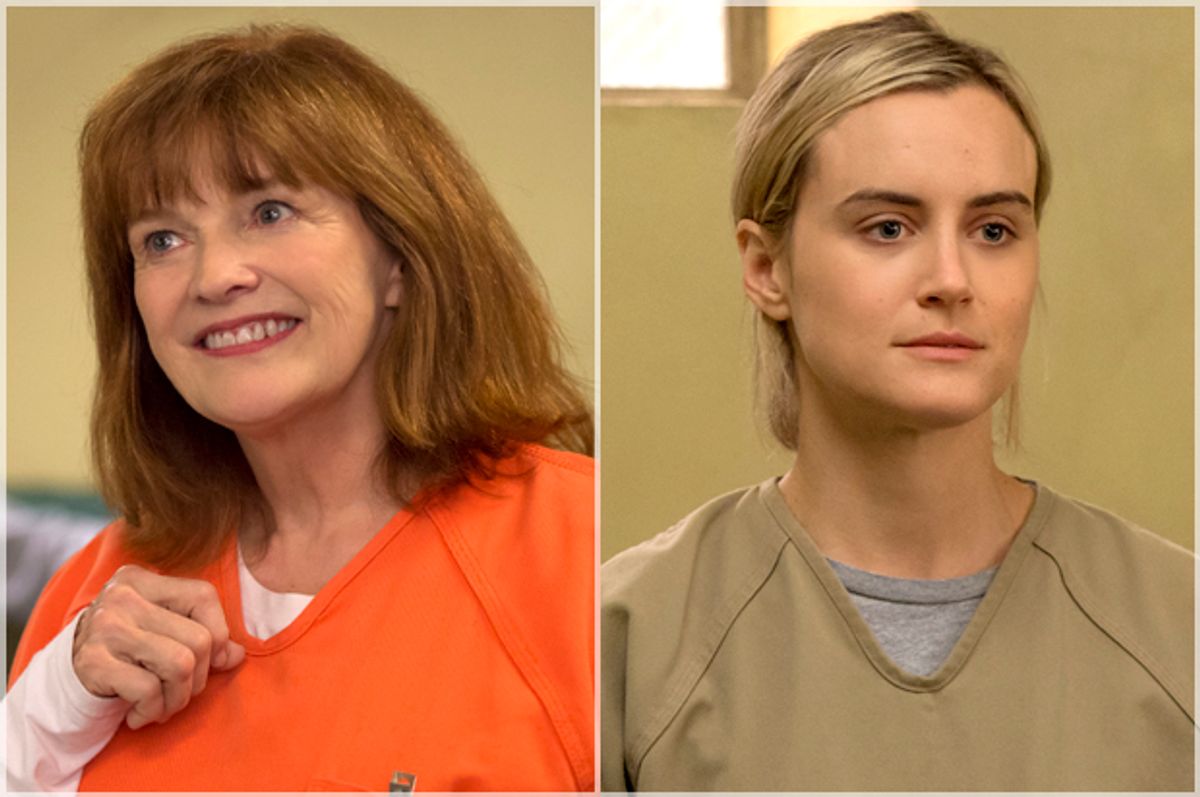 Among the many benefits granted by the age of streaming TV is a deeper level of hindsight. Think high-definition clarity, something more than 20/20. For instance, thanks to clickable platforms such as Netflix, I can tell the exactly moment that I began detesting Piper Chapman (Taylor Schilling): It happened at the 42-minute, 39-second point of “Orange Is the New Black’s” series premiere.

In that moment Piper, overwhelmed by her first day in Litchfield Penitentiary, walked into Correctional Officer Joe Caputo’s office and immediately caught a case of the weepies.

“Mr. Caputo,” she squeaks through quivering lips, “please let call my fiancé. I have to let him know I’m OK.” Caputo grants her two minutes on his office phone, and in those 120 seconds she whines about her granny panties and reveals she has only spoken to white people. She thinks they’re the only ones who will share their shampoo. Their banter moves on to takeout. You know, the important things.

Honestly, why wouldn’t Caputo give Piper two minutes on his private phone? She’s just a nice girl in a not-so-nice place, and she asked nicely. She has manners. She’s polite!

Now, imagine one of Piper’s African American peers making the same request. Let’s make it an apples-to-apples comparison: Let’s say the person in question is Poussey (Samira Wiley), the sweet, multilingual child of an Army officer and a woman with a master’s degree in art history.

It’s highly doubtful that the C.O. would have handed her the receiver and instructed her to dial ‘9’ for an outside line.

Series creator Jenji Kohan based “Orange Is the New Black” on a memoir by Piper Kerman who, like Chapman, is an upper-middle class white woman who did time in a minimum security prison. From the series’ beginning, Schilling played up the script’s comedic notes to accentuate Piper’s sense of entitlement. Kohan presumably intended the character to serve as a heightened parody of pampered upper-crust whiteness to put the rest of the prisoners into context.

Unlike other scripted series, Piper hasn’t grown more universally relatable as “Orange” progressed. Quite the opposite: in season four, as I said in my original review, it’s pretty tough to see Piper as anything less than despicable -- not just because she inadvertently founded a white supremacist gang, oopsie! Not because she tries crack, or describes herself as “gangsta – like, with an ‘A’ at the end.”

Not for any of that. Rather, it’s because from the moment we met Piper Chapman, she has represented the worst of elements of white privilege.

That term, "white privilege," has been tossed around so much in today’s culture, dropped in the context of conversations about social justice and racial inequity, in an era when people still debate whether the #BlackLivesMatter movement is really necessary, and shouldn’t it be all #AllLivesMatter?

A fair number of people have become sick of hearing the words “white privilege,” and I’ve encountered more than a few who don’t appreciate any implication that they benefit from it. Few concepts are more certain to ignite a long trail of pointed, passionate comments on a tweet or a Facebook post.

But the reason “Orange Is the New Black” has been digging through the guts of white privilege from the start is because Piper serves a stand-in for the average viewer. Implicitly, Piper makes viewers see the perks afforded to them, or denied them, by that privilege. (Even the name of her illicit dirty panty business, Felonious Spunk, is a cutesy version of cultural appropriation; she can play with the name of a famous African American jazz musician, but are any black girls on her payroll?)

“Orange Is the New Black” owes its very existence to white privilege, in fact. In a 2013 NPR interview, Kohan called Piper’s character her “Trojan Horse”: “You're not going to go into a network and sell a show on really fascinating tales of black women, and Latina women, and old women and criminals,” Kohan admitted. “But…the girl next door, the cool blonde, is a very easy access point, and it's relatable for a lot of audiences and a lot of networks looking for a certain demographic. It's useful."

Kohan’s strategy amounts to this: Piper’s life story isn’t nearly as fascinating as that of “Crazy Eyes” (Uzo Aduba) and lacks the poignancy of Taystee’s (Danielle Brooks) who, it was revealed, has spent so much time bouncing through the system that she’s more comfortable inside of prison than in the outside world. It has none of the fire that drives Aleida (Elizabeth Rodriguez) or Ruiz (Jessica Pimentel) who, thanks to Piper’s selfish machinations, receives a punishment this season wildly out of proportion to the infraction for which she was caught. Even Tiffany “Pennsatucky” Doggett (Taryn Manning) or Piper's ex, Alex Vause (Laura Prepon), are more fascinating subjects.

Thus, Piper has become less and less central to “Orange Is the New Black” with each new season.

In exploring the lives of the women around her, though, the Netflix dramedy is one of the few that effectively reminds its viewers that minorities and the underclass are not monolithic. Each African-American woman in Litchfield carries a very different burden than their Latina peers. Dominicans, Puerto Ricans and Mexicans bring different brands of cultural pride to the table, which is examined more closely this season.

Each person’s culture and family, their lives on the outside, inform what they do in Litchfield.

Season four also shows us that white privilege is by no means a one-size-fits all term; it has its own levels of stratification built in. Piper can use her perceived pull to give the new cadre of guards an excuse to enact “stop and frisk” inside the prison and target the black and brown inmates, because that aligns with their collective urge to exercise their power over these women. By virtue of her skin color, Piper can be secure in knowing that one of the C.O.s would never, say, put a gun to her head and force her to swallow live vermin for his entertainment.

But she can’t talk her way into a cushy cell with bunk-side meal delivery, as Litchfield’s celebrity inmate, lifestyle maven Judy King (Blair Brown) does. By dint of her celebrity status and expertise in spinning the media, King transforms a potentially disastrous video showing her as the star of a racist puppet show, “Chitlin’ Joe and Watermelon Sam,” into a publicity coup when she “leaks” a photo of her kissing Black Cindy (Adrienne Moore).

King is also all too happy to allow Poussey to bask in her limelight when the latter’s own girlfriend Soso (Kimiko Glenn) sold the star a false sob story painting Poussey as the child of a prostitute. Nothing awakens a person’s inner white privilege than the thought that just by being an example of “the ideal,” she’s changing a life. (Soso, too, is learning about her own sense of privilege and entitlement, one founded more in socioeconomics than skin color.)

With King’s celebrity and bank account inspiring the prison’s management, MCC, to make her queen of the castle, she also topples Red (Kate Mulgrew) from the top tier of Litchfield’s social hierarchy. The old guard respected Red’s work ethic: she maintained order in the kitchen and with her (all-white, it must be said) family of choice, doing her best to keep the on the straight and narrow. She bootstrapped her way to the top of Litchfield’s social mountain.

But Red does not have a media empire and lawyers with four-figure hourly rates, and by the end of season four she’s as much of a punching bag as the rest.

In putting her unapologetic selfishness and knack for self-preservation out front, though, King nevertheless emerges from this season smelling rosier than Piper. At least she knows who she is.

“Look. I’m trying,” King tells Poussey. “I mean, maybe I am a racist. Maybe I’m just too stupid to know it. But shit…I am the friendliest racist that you are ever going to meet. So can’t we all just get along?”

Such naked self-awareness of privilege is refreshing at this point in the series – and to be fair to Piper, Kohan and her writers allow her a measure of that too. It only took the ruining of a few lives and being branded with a swastika to get there.

“My parents didn’t teach me to be like this,” Piper admits to her friends in a stolen, drug-induced moment of honesty. “…I think I’ve been trying to win prison.”

To reassure her, Vause says, “You’re not the worst person in here, Piper.”

In that second? Maybe not. But there’s always season five. She’s got time.