Everyone calm down: The "no fly, no buy" bill was designed to embarrass Republicans, not to pass — and it's working

We must remember the "no fly, no buy" bill was written purely to maximize political damage to the GOP 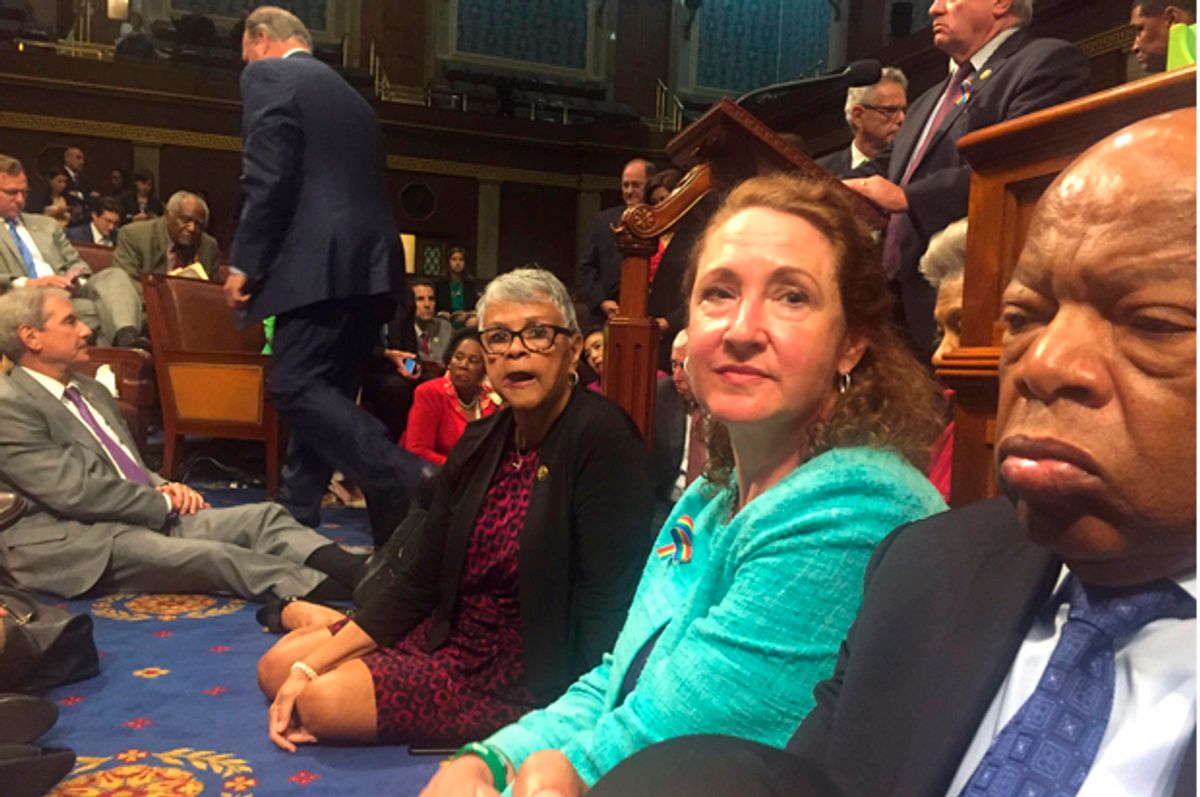 Led by Rep. John Lewis, whose history as a civil rights activist added moral weight to the event, the sit-in was a smashing bit of political theater. It threw a wrench into the Republican do-nothing strategy that, until now, had been employed to great effect after each mass shooting. It made it way more likely that gun control remains a major issue throughout the election season.

And, in a sign of the state of political discourse in the year 2016, it caused a wave of "uh, actually" reactions from liberal journalists.

At issue was a bill deemed the "no fly, no buy" bill. (There was also a bill, that barely got mention, expanding background checks.) This bill would ban anyone whose name is on the no-fly list from buying a gun. Many liberal journalists, most notably Alex Pareene at Gawker, protested because the no-fly list is already a terrible violation of civil liberties.

"The no-fly list is a civil rights disaster by every conceivable standard," Pareene writes. "It is secret, it disproportionately affects Arab-Americans, it is error-prone, there is no due process or effective recourse for people placed on the list, and it constantly and relentlessly expands."

This is all true. Part of me is glad to see people exploiting this grandstand for gun control in order to highlight the horror of the no-fly list, which really should be getting attention even at times when it isn't being invoked in the gun control debate.

Pareene appears to thinks this, writing, "Perhaps such a bill makes political sense as a sort of desperate attempt to get something through a conservative-dominated Congress."

Except not. Everyone who is following this debate closely should know full well that this bill is fated for the boneyard of failed bills, as the Republicans are far too bought off by the NRA to let it pass.  This bill is best understood as a sacrificial lamb, written for the sole purpose of getting Republicans on the record voting it down.

If Democrats are going to sacrifice a bill to the fire, it might as well be one that probably shouldn't pass in the first place.

So why offer up a bill that was destined always to fail? Two reasons: 1) To kickstart political momentum for more comprehensive gun control and 2) To cause political problems for Republicans in a year when they are already in disarray due to the Donald Trump candidacy. On both counts, this bill did what it was intended to do.

On the latter front, it's critical to understand the context here. Republicans are in very real danger this year of losing seats in Congress due to Trump being the top of their ticket. It's not just that he's so repulsive that he might cause some conservative voters to sit out on election day. Trump has sown confusion and ideological incoherence within the conservative ranks, making it clear that the Republican party isn't really organized around anything resembling principled conservatism.

The "no fly, no buy" bill capitalizes and builds on an already tense situation by forcing Republicans to choose between the "tough on terror" stance they love campaigning on and their rejection of any legislation that might reduce profits for the gun industry. In other years, that might not matter so much, but in a year when the very definition of "conservative" is in disarray, forcing these kinds of contradictions into the public view only escalates problems for Republicans.

If things get bad enough on the right, it may end up returning control of congress to the Democrats. At which point, they will probably push for gun control legislation that is more effective and more in line with liberal values, instead of dragging this zombie bill out of the graveyard.

It's a long shot, but it's the only shot the Democrats have, so they really shouldn't be faulted for taking it. And early signs show that the strategy is effective. At one point during the sit-in, Rep. Louie Gohmert started running around yelling, "Radical Islam!"

While I'm sure that felt very satisfying to him, it also reinforced how much conservatives cannot reconcile their internal contradictions. On one hand, they claim that "radical Islamic terrorism" is some dire threat that requires making "hard choices". On the other hand, they believe people they deem too dangerous to get on an airplane should be allowed to get an AR-15 — something no civilian of any sort ever needs — in the space of 15 minutes. Instead, Republicans are left running around yelling "radical Islam!" as if those are magic words that will somehow deflect bullets.

It's fashionable these days to impugn the Democrats as closeted conservative sellouts, despite the evidence to the contrary, but as anyone who was photographed in a puka shell necklace at a Dave Matthews concert could tell you, not all 90s-era trends are worth reviving. Democrats did a good thing here. They increased political momentum behind gun control, momentum that, if it really takes off, will be used down the road to pass better bills. And they did so while also dishing out political poison to Republicans. It's okay to be proud of them for a job well done.

We can and should wonk out about the civil liberties violations of the no-fly list — ideally all the time, and not just when sneering at Democrats — but framing it in this false narrative about the Democrats being conservative sellouts is missing the point. The real issue with civil liberties is there is simply not enough political will out in the public to protect them, which is why politicians don't move on the issue. The "sellout Democrat" narrative is a cheap ploy to avoid confronting the real issue, which is the public attitudes about this issue — and to avoid doing the hard work of changing those attitudes. Real movement on this issue requires changing the people's minds, and the politicians will follow.