Live-streaming a movement: The Democratic sit-in shows how technology has made American politics more transparent

C-SPAN can't broadcast the Dems' sit-in on gun control, but that doesn't mean it wasn't broadcast in other ways 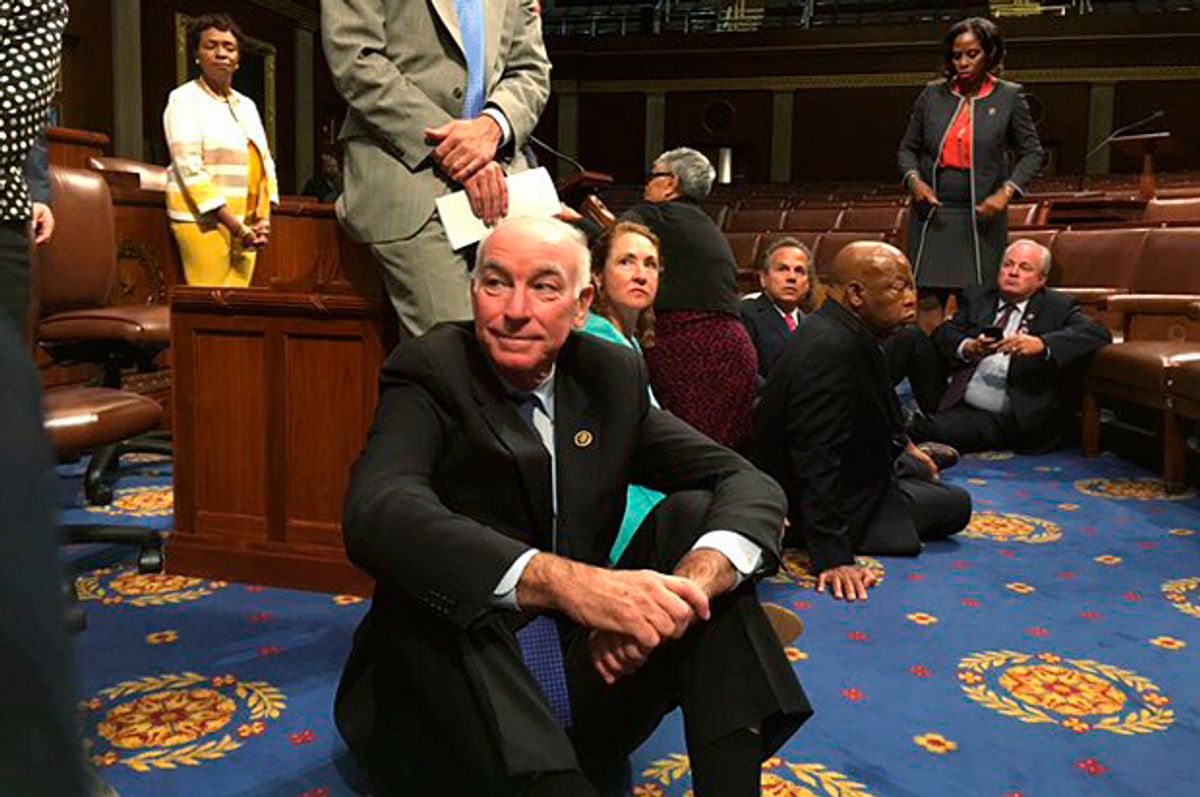 In the old days, control of a mic or camera feed meant something. But times have changed. Regardless of whether the revolution is televised or tweeted, it can be live-streamed.

On Wednesday, House Democrats occupied the floor, refusing to leave unless they secured a vote on “No Fly, No Buy,” the provision that would prevent gun sales to individuals on the “no fly” list. Spearheaded by civil rights icon Rep. John Lewis, the sit-in hijacked the day’s agenda, powered by many Democratic House members and a number of allies from the Senate, including Elizabeth Warren and Bernie Sanders.

Fundamentally, it’s an exercise in the tactics proven in the past, though the contrasts are breathtaking. The cover photo on Lewis’ Facebook page features a historic shot of the 1963 March on Washington, with the Congressman among those flanking MLK. But look down at his news feed and see an image of the occupation, a smartphone shot of him sitting in the well of the House, flanked by his usually-austere colleagues, informal and relaxed.

The technology of the protest, however, is of the present and in the hands of millions of Americans. The GOP-controlled chamber, having shut off the cameras, forced the protesters to turn to their phones. Technically, the chamber sets its own rules, opting to allow C-SPAN to broadcast from the floor only when the House is in session. Still, Speaker Paul Ryan’s enforcement of the rule conjures up dramatic images of Mayor Richard Daley, cutting the mic at the 1968 Democratic convention or, more routinely, in a Chicago city council meeting when he’d had enough of an opposition alderman.

But Daley didn’t have to contend with Periscope or Facebook. C-SPAN stayed on the air for the sit-in, streaming video feed from members’ social media. The stream wasn’t perfect, fading out at times and suffering from a smartphone dropped now and then, but it nicely approximated the official camera of the House. And C-SPAN even complied with the letter of the rules: The House wasn’t in session, and so its cameras were off, even though the phones weren’t.

Filming and streaming may not be at the cutting edge of technology in 2016, but it is truly making a difference. Videos shot on phones by citizens who witnessed episodes of police brutality have been central to the official proceedings and the public discourse that followed. Civic witnessing initiatives — like Witness.org — seek to empower citizens to use video creatively to advance human rights, even in authoritarian states.

It’s not clear where this sit-in will end. The Democrats vow “No Bill, No Break,” tossing in a hashtag for good measure. Even if C-SPAN weren’t carrying it, the video would be out there, and the amateur video feed seems to empower the members. They’re loose, casual and speaking their minds a little more than usual when under the official lens in the chamber or the glare of the news cameras.

The speaker calls the sit-in a “publicity stunt,” and Congressman Mark Walker (R-NC) tweets that it’s a “disgrace.”

But it’s refreshing to see these mostly not-so-young members draped on the floor, cleverly defying the power who controls the camera, and—in the words of Congressman Lewis — getting into good trouble.

Barbara Trish is professor and chair of the political science department at Grinnell College in Iowa. She specializes in U.S politics, political parties, the electoral process and technology in politics.