Neverending stories: Franchise thirst explains how sequels like "The Purge: Election Year" get made—but not why they're in theaters 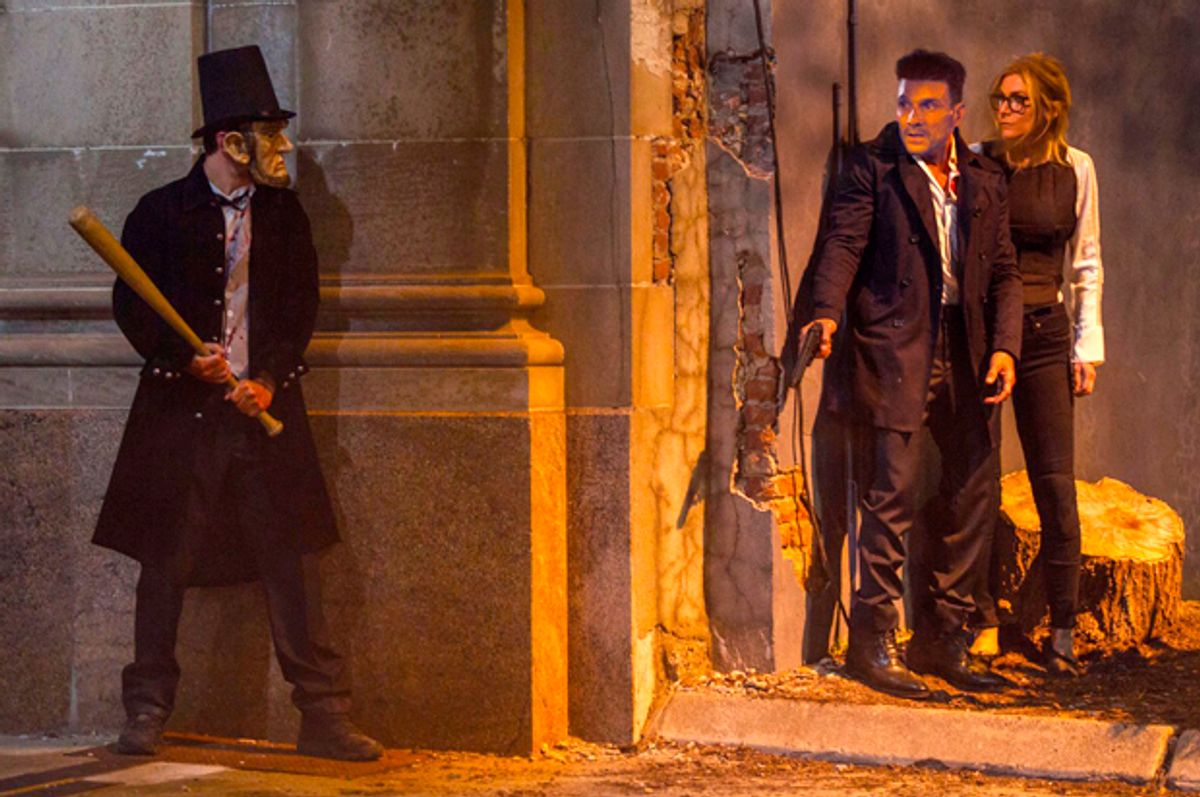 Hollywood has come down with a bad case of sequelitis. This summer’s box office is down a hefty 22 percent from last year, dragged down by a glut of underperforming franchise misfires. These will include “X-Men: Apocalypse,” “Neighbors: Sorority Rising,” “Teenage Mutant Ninja Turtles: Out of the Ooze,” and “The Huntsman: Winter’s War,” all of which will significantly underperform their predecessors. At the time of writing, these five movies trail their previous installments by a combined $673 million.

Disney’s “Finding Dory” and “Captain America: Civil War,” both which earned high marks from critics, are some the few sequels in 2016 to improve on previous opening weekends in their respective series; even solid openers like “Now You See Me 2” and “The Conjuring 2” have been seeing much steeper week-to-week declines than the originals.

This is a huge problem when the number of sequels produced continues to climb. At this point last year, 17 sequels, spinoffs, remakes, and movies based on pre-existing properties (see: the “Entourage” movie) were released. This year, we’re up to 21, many of which no one actually wanted. Was there much of a demand for “London Has Fallen” or “Mother’s Day,” yet another entry in Garry Marshall’s never-ending series of star-studded holiday movies? How about the decade-too-late “Zoolander 2” and “My Big Fat Greek Wedding 2?”

Birth.Movies.Death’s Devin Faraci explains that the problem is that the demand for what sequels are has changed in recent years: Audiences crave sagas, which treat each entry as a new chapter in an ongoing story, not a retread of what we already saw.

The scariest thing about “The Conjuring 2” was how closely it resembles the previous film: They’re both movies about an adorable family with lots of adorable children who are haunted by a demonic presence. Last time an a possessed farmhouse spirit terrorized our heroes; this time, it’s a satanic nun. The preteen girls who have the most contact with the havoc-wreaking succubus in question even look remarkably similar: Madison Wolfe and Joey King could pass as twins. They even have the same haircut.

While The Hollywood Reporter noted that the recent slew of flops is making studios more cautious about sequels—with Universal pushing back “Pitch Perfect 3” to get the script right—that won’t stop the industry from pushing even more franchises, reboots, and follow-ups: Currently, there are 163 sequels in the works. James Cameron, for instance, is planning four more “Avatar” movies.

Part of that is due to a studio system that’s grown more cautious in recent years, banking on pre-existing properties that seem like safe bets in an uncertain film market. “We have projects at six studios, and ninety per cent of their attention goes to the ones that are superhero or obviously franchisable,” director Shawn Levy (“Night at the Museum”) told the New Yorker. “And every single first meeting I have on a movie, in the past two years, is not about the movie itself but about the franchise it would be starting.”

The other reason, though, that so many theatrical sequels are being greenlit is because of the erosion of the home video market. With the disappearance of video stores, the rapid decline in DVD sales, and sluggish VOD numbers, movies are being pushed into theaters that have no business in a multiplex. They simply don’t have any other choice.

“Finding Dory,” which is earning high marks from critics, would have been treated very differently by the Mouse House two decades ago. Like “Monsters University” and the poorly received “Cars 2,” it would have been a straight-to-video release.

Although these movies vary greatly in quality, they are built on the exact same template as Disney’s “Balto II,” “The Little Mermaid II,” and “Pocahontas II: Journey to a New World.” The trailer for the latter, which was released directly on video in 1998, promised “a new epic chapter from the Pocahontas.” The jovial narrator boasts: “Pocahontas and her friends embark on a fun-filled adventure in the New World of England, where they’ll meet new friends and fight for the future of her people.”

While the phrase “direct-to-video” has a pejorative connotation, the “new friends!” + “new adventure!” formula boded very well for Disney in the 1990s and early 2000s, as the studio launched a number of franchises on VHS and DVD, including “Tinker Bell” and the long-running “Air Bud” series. The modestly successful 1997 release, starring Kevin Zegers, spawned a mind-boggling 13 direct-to-video sequels. Those abruptly ceased in 2013.

For studios, the halting of that gravy train means they’re missing out on a whole lot of sauce.

These movies are cheap to make, market, and release and can be extremely profitable for studios. “Return of Jafar” and “The King of Thieves,” the two direct-to-video sequels to Disney’s smash hit “Aladdin,” did very well for themselves, earning a combined $280 million on the home video rental and sales market. Those numbers would be extremely difficult today: The biggest selling DVD of the year so far has been Disney’s “The Good Dinosaur,” which has pushed just 1.2 million copies. It has earned $21 million dollars at the time of writing.

To say DVD sales are bleak these days is a massive understatement: To date, the top 10 biggest-selling DVDs in 2016 have brought in just over $125 million. That’s less than half of what “Pirates of the Caribbean: Dead Man’s Chest” earned on video a decade ago.

That market erosion means that if they aren’t picked up by streaming platforms like Netflix—as in the case of “Beasts of No Nation” or this month’s “Tallulah,” starring Ellen Page—there’s almost nowhere for non-theatrical (or limited for-awards-eligibility) releases to go. When stores like Blockbuster and Hollywood video went the way of the dodo, Redbox was poised to reap the spoils. Those DVD kiosks, though, have likewise fallen on hard times, with rental figures plummeting by 17 percent in the fourth quarter of 2015.

One might assume that consumers ditched physical DVDs for more rental convenient options, like video-on-demand. Back in 2015, Steven Soderbergh predicted that VOD would save the cinema. The prolific auteur’s divisive doll-factory thriller “Bubble” pioneered the simultaneous release strategy—in which movies were released in theaters the same day they were available for purchase through your local cable provider.

But VOD has yet to come to Hollywood’s rescue. In 2016, video-on-demand sales are expected to increase by 12 percent from last year’s numbers—which seems healthy at first glance. Those figures, however, are deceptive. While revenue from streaming has surpassed both theatrical box office and DVD sales in recent years, the VOD market itself has experienced sluggish growth since 2012, when revenue shot up 20 percent from the prior calendar year. Between 2015 and 2016, growth in the VOD market is projected to drop by 20 percent.

That decline may be as due to a generational divide as it is competition from subscription services: VOD options primarily appeal to digital natives, not the kind of people who traditionally purchase direct-to-video movies. For instance, can you imagine your stepdad renting “Universal Soldier 27” off Amazon Video?

The year before Disney pulled the plug on the “Air Bud” series, Variety noted that because of the difficulty of getting VOD-only releases to consumers, increasingly fewer studios were bothering with making direct-to-video movies at all. After Universal greenlit four sequels to “Bring It On” in six years, there hasn’t been another since 2009. The “Wrong Turn” horror franchise, in which hillbilly cannibals feast on a new crop of helpless teenagers in each installment, chewed its final corpse in 2014.

It’s extremely hard to find any hard numbers on direct-to-video releases by year. But when Fox dropped “Marley & Me: The Puppy Years” in 2011, one estimate suggests that 40 movies were released directly in stores, as well as at your local Redbox and on streaming platforms. This year, just 10 will follow the same path.

Few of us out there will mourn the loss of DVD-only releases like “Beverly Hills Chihuahua 2” or “Showgirls 2: Penny’s from Heaven,” but without a variety of viable releasing options, studios will continue pushing sequels the old-fashioned way—on the big screen. That has led to a number of shoddy franchise fillers (see: “Paul Blart Mall Cop 2”) getting a major release, when they would have been better served by your local Blockbuster. “The Purge: Election Year,” “Ice Age: Collision Course,” “Underworld: Blood Wars,” and “Ouija: Origin of Evil” will all bow in theaters before the end of 2016.

If Hollywood hopes find a remedy for the plague of sequels infecting the multiplex, the industry needs to do so soon—because the sickness is about to get a lot worse.