"Pinklining": How women of color are disproportionately hurt by Wall Street's predatory practices 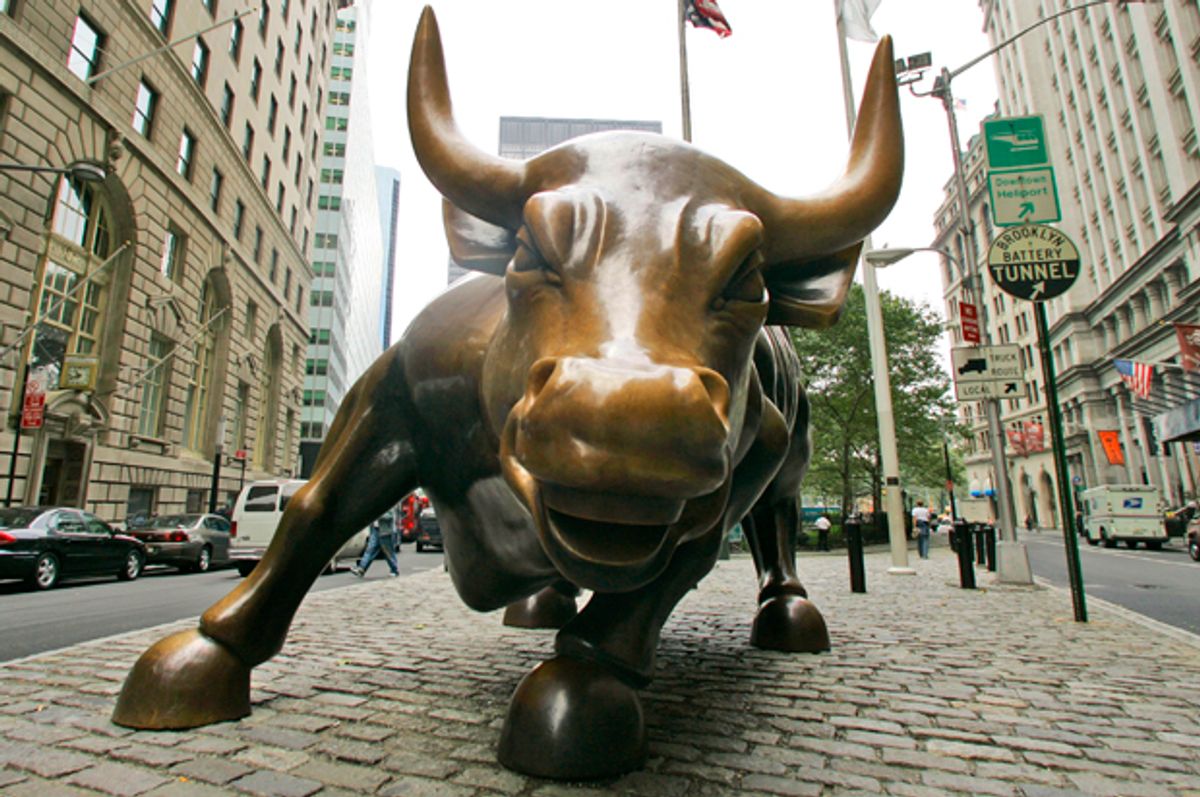 A new report explains how women, and especially women of color, are disproportionately hurt by Wall Street.

The report, which was written by scholar Suparna Bhaskaran, shows how "Wall Street takes advantage of women’s precarious economic position and marginalization to push them deeper into debt," in a practice Bhaskaran calls "pinklining."

It looks at three primary financial practices in which these inequalities are visible: subprime home mortgage lending, payday lending and higher education lending.

Wells Fargo was a particularly egregious example. It targeted black and Latina/o Americans with subprime loans, leading to a $175 million settlement with the Department of Justice in 2012.

This disproportionate targeting is clear in payday lending as well.

Nearly 60 percent of customers in these payday loan stores are women. Interest rates of more than 300 or even 400 percent often leave women and their families trapped in spirals of debt.

Women and people of color are also disproportionately hurt by higher education lending.

Despite this, enrollment in for-profit colleges increased by a staggering 565 percent from 1990 to 2013.

Women are disproportionately represented at these predatory institutions, making up nearly two-thirds, 65 percent, of students.

People are color are also disproportionately represented. Just 10 percent of white undergraduate students in the U.S. go to for-profit colleges, compared to 15 percent of Latina/o students and 28 percent of black students.

Getting worse, not better

"From the economic crisis triggered by the finance industry, to subprime mortgages, payday loans and student debt — again and again women and women of color are driven deeper and deeper into debt as a result of the practices of" Wall Street, the report notes.

In a statement, the author Suparna Bhaskaran stressed that Wall Street's "pinklining ultimately deepens, widens and renews existing gendered and racialized economic inequality through the significant transfer of income and assets from low to moderate income women and women of color to the financial sector."

These disparities have gotten even worse in recent years, as the 2008 financial crisis and the post-crash economy have taken a great toll on women.

In terms of post-recession job growth, women again got the short end of the stick. A net of 5.5 million jobs were created in the U.S. economy between June 2009 and July 2013. More than 3.5 million, nearly two-thirds, of those jobs went to men, while just around 2 million went to women. Many of those created were low-wage jobs, as well.

In the workplace, women of color have an even larger gender pay gap with men than white women. And yet, because of inequality, mass incarceration and employment discrimination, women of color are more likely to be single heads of households who need more resources for their families.

Minnesota Rep. Keith Ellison, who co-chairs the Congressional Progressive Caucus, recommended the report for drawing attention to how the financial sector exploits the most vulnerable.

"The wealth gap between women of color and white families remains shockingly large," he said in a statement. "This report highlights the harmful products and unfair policies that affects those with the fewest resources and calls us to take action."

In addition to reviewing existing research, the report includes surveys with 771 women and 50 in-depth interviews, relaying their experiences with debt.

One woman featured in the report, Lorian Smith of East Orange, New Jersey, explains how she has struggled with banks that have been trying to foreclose on her home. “I have played by all the rules,” she said. “I got an education, I held down a career for 40 years, I bought a home where I raised my family."

"Despite playing by the rules, I am now in a position that I am uncertain I will ever recover from," Smith continued. "Debt has become a vicious cycle in my life and in the lives of many people I am in touch with."

The report was jointly released by the community groups Alliance of Californians for Community Empowerment, New Jersey Communities United and ISAIAH in Minnesota.

The groups called on the Consumer Financial Protection Bureau to investigate how women, and especially women of color, are targeted by the financial industry.

"This is part of a broader national effort to hold banks and corporations accountable for the role they play in causing and profiting off of economic inequality and austerity policies that harm working class communities across the country, particularly communities of color," the groups said in a statement.

They also expressed support for the new proposed regulations on predatory payday lending that the Consumer Financial Protection Bureau released on June 2. Consumer advocates have warned that the pending rules, at present, do not do enough to rein in the exploitative industry. These community groups likewise urged the bureau to strengthen its proposed regulations.

Unions as one solution

The "pinklining" research was funded by the Women’s Equality Center, a non-partisan project that advocates for women's rights.

In a recent article, the Women’s Equality Center also stressed how organizing into labor unions has helped women and people of color fight these forms of structural oppression.

"Women organized into unions gain the power to bargain for their working conditions, wages and benefits so they can achieve greater economic security for themselves and their families, moving them faster toward full equality with men," the organization wrote.

It highlighted "labor’s specific role in advancing racial and gender justice for workers over the past few decades," and noted that organizing into unions can help women close the wage gap with men.

The article cites a 2015 study, "The Union Advantage for Women," which details how labor unions benefit women and people of color.

"Women of all races benefit from unions, but women of color, who are most disenfranchised in today’s economy benefit most," the Women’s Equality Center emphasized, noting that women in unions are also more likely to have benefits like health insurance, paid leave and pensions.

Sister Simone Campbell, the executive director of the NETWORK Lobby for Catholic Social Justice and the leader of the activist group Nuns on the Bus, applauded the pinklining report for bringing attention to systemic inequality.

“Predatory financial practices prey on women and people of color, thus eroding the common good. These debt traps mask the crisis of wages in our society," she said.

"This must be addressed for the sake of women workers, but also for the future of our nation. Our children are the victims in the long run. For this reason, we must mend the gaps. We must have an economy that puts people, not profit, at the center.”