"We shall overcome": 10 highlights of the House Democrats' dramatic gun control sit-in 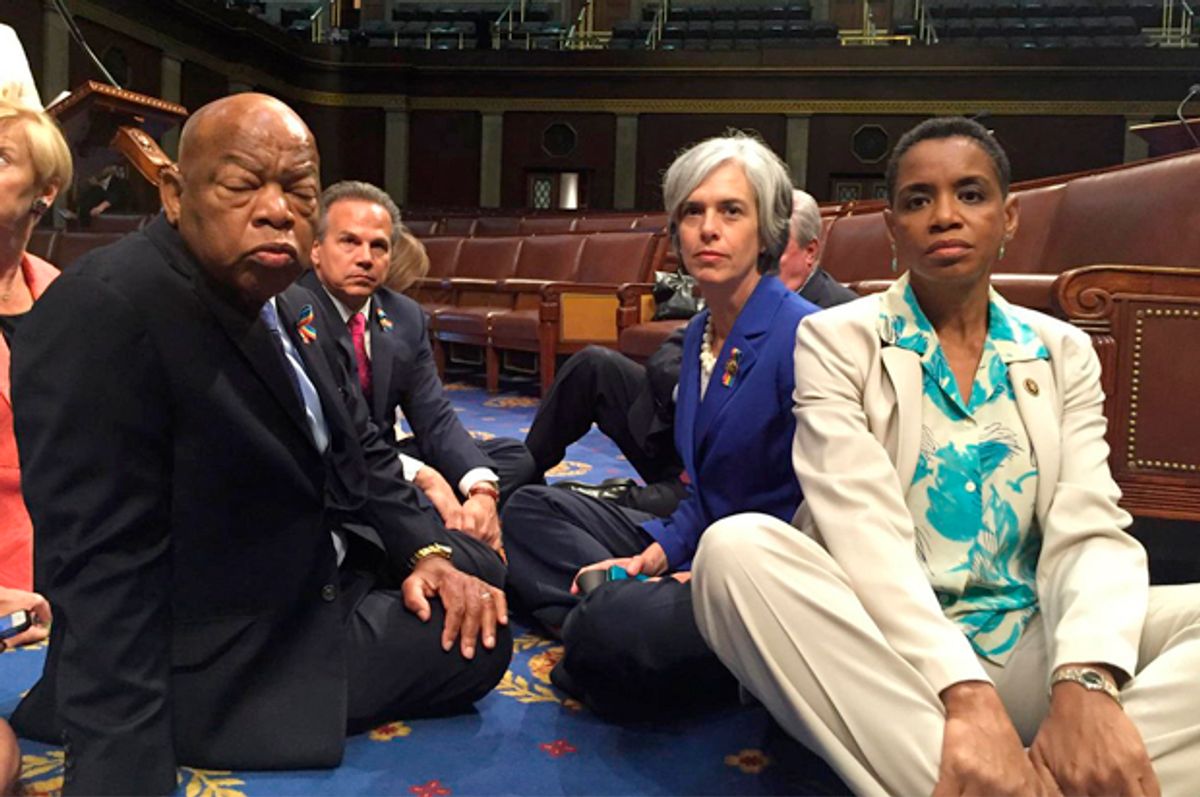 House Democrats decided to end their historic sit-in to call for a vote on gun control Thursday afternoon, CNN reports, after a dramatic day-long protest that disrupted business-as-usual on Capitol Hill and caused chaos in the House chamber.

Republicans effectively ended Democrats' hopes of forcing an immediate vote on gun control early Thursday morning by adjourning the House until after the July 4 holiday, but Democrats have vowed to continue their fight when Congress reconvenes.

Some highlights from the sit-in:

1. Democrats led by Georgia Rep. John Lewis began the sit-in Wednesday morning in an effort to force a vote on the "no fly, no buy" bill, which would prevent suspected terrorists on government watchlists from purchasing firearms. Dozens of representatives joined Lewis to sit directly in front of the House rostrum, declaring their intention to occupy the floor until House Speaker Paul Ryan allowed a vote on the bill:

2. Republican leadership immediately gaveled the House into recess when the sit-in began, preventing C-SPAN from broadcasting the protest using the feed from House-controlled cameras. C-SPAN, however, circumvented the blackout by broadcasting live video from inside the chamber provided by House members using streaming services such as Periscope and Facebook Live.

3. During the recess, participating Democrats held the House floor and took turns speaking on gun violence. At one point, Rep. Debbie Wasserman Schultz emotionally read aloud an open letter of support penned by her friend and former colleague Gabby Giffords, who suffered near-fatal gunshot wounds in a 2011 shooting that killed six. "I'm so proud of our friend today," Wasserman Schultz said through tears. "I'm so proud to stand with all of you."

4. House Speaker Paul Ryan appeared on CNN Wednesday evening and called the sit-in "nothing more than a publicity stunt":

4. Sen. Elizabeth Warren showed up to deliver Dunkin' Donuts to hungry House members as the sit-in continued into the night:

A supporter from California called in a Domino's delivery for the protesting members of Congress:

5. A crowd of hundreds gathered outside the Capitol building to support the sit-in, chanting "Do your job!" at Republican representatives.

6. Paul Ryan took the podium late Wednesday night and attempted to regain control of the chamber, but Democrats holding signs with the names of gun control victims and chanting "No Bill! No Break!" and "Shame! Shame!" refused to yield the floor:

7. During a vote on a measure unrelated to gun control, Democrats began singing the civil rights hymn "We Shall Overcome," at one point changing the lyrics to "We shall pass a bill someday":

8. Tempers flared when Republican congressman Louie Gohmert angrily confronted Democrats speaking in the House during a recess, yelling, "Radical Islam killed these people!" Democrats shouted back at Gohmert, chanting "No Fly! No Gun!" Gohmert engaged in a heated argument with Rep. Corrine Brown, a Democrat whose district includes the site of the Orlando mass shooting, during which the two reportedly had to be physically separated.

9. Ignoring the protest, Republicans eventually forced a vote on an unrelated appropriations bill, which passed after no debate at about 3:00 AM. Republican leadership then adjourned the House until after the July 4 holiday, to the jeers of still-protesting Democrats.

10. A number of representatives spent Wednesday night on Capitol Hill to continue the sit-in, and minority leader Nancy Pelosi vowed to hold the House floor "until hell freezes over,"  but CNN reported Thursday afternoon that Democrats would end the protest and continue the fight after the recess.

"We are going back to our congressional districts — we are going to engage our constituents on this subject, and we will not allow this body feel as comfortable as in the past," Rep. Jim Clyburn told CNN. "On July 5, we will return, and at that time we will be operating on a new sense of a purpose."