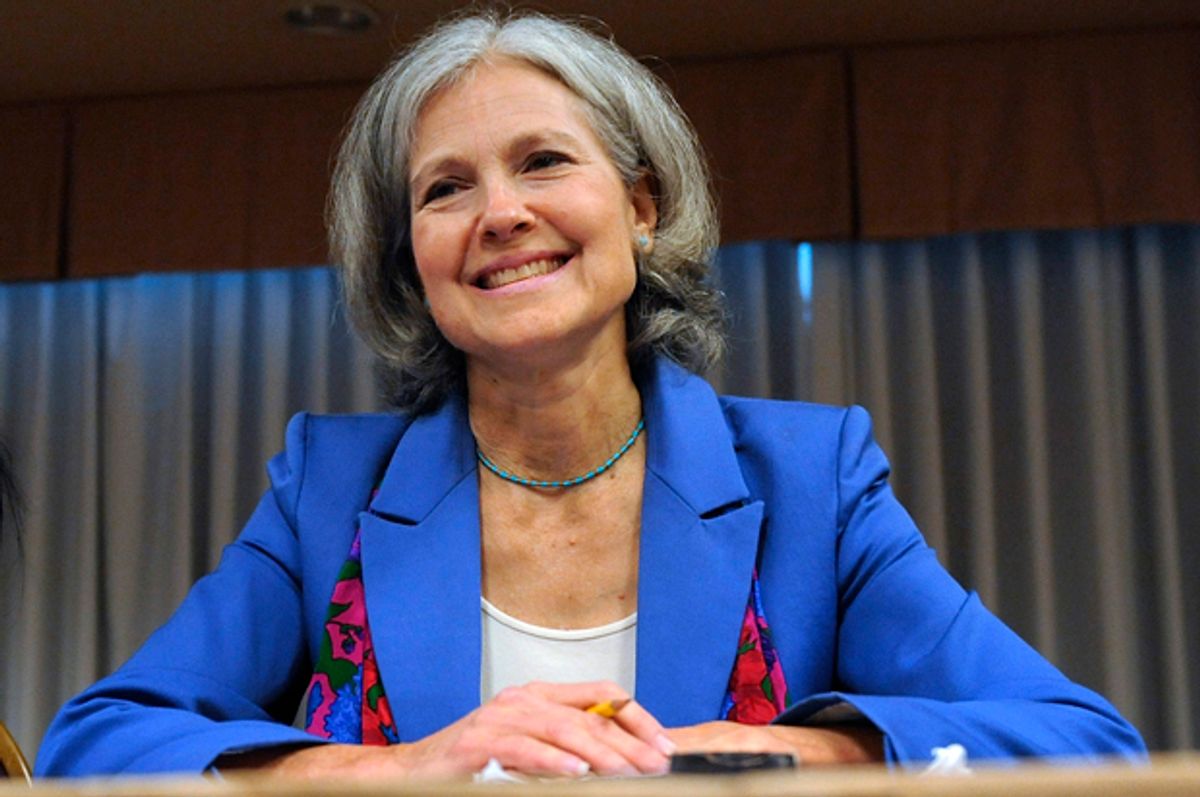 We’re in something of a lull in the news cycle now, with primaries over and the convention a month away. The presumed nominees are working hard with their PR teams to decide where they want the narrative to take us next. But there’s an unauthorized narrative that is quickly taking shape online: rumblings of defection from the Democratic Party, a surge in registration for the Green Party, and a serious bid come November by Green Party nominee Jill Stein. Is it true? Why not? Haven’t we already thrown the playbook out the window this year? Typically, the prospect that a left-leaning independent or third-party bid will spoil the chances of the Democratic Party is enough to unify Democrats behind their nominee in a general election. But this year is special.

For starters, it is special because Hillary Clinton is such a divisive figure within her own party, as much for the way she plays politics as the conservative policies that define her career, not to mention the scandals and cover-ups that continue to dog her campaign. As the joke goes, her platform may match Bernie Sanders’s on 95% of the issues, but her record matches Trump’s platform on 95% of the issues, and her issues match Richard Nixon on 95% of the record. Perhaps that is why Richard Armitage and others from the right are breaking ranks to endorse her. Win or fail – or win and then fail – Clinton offers a no-lose situation for neocons.

The effective merger of America’s two largest political organizations – let’s call it the Demo-Repo Party – is an important game-changer all in itself, one that will go a long way in taking the wind out of the unholy panic of the “vote blue and shut up” crowd. We will see real evidence of this trend as Trump’s campaign continues to collapse and Clinton rushes in to scoop up more high-ranking Republican endorsements, leaving a power vacuum on the left where the Democratic Party used to be. When that happens, the first thing to go up in a puff of smoke will be the lesser-of-evils argument, removing the last obstacle for unhappy progressives between their conscience and a vote for Jill Stein. The imminent reality of a one-party system all but requires it.

But there is a less obvious argument that will only grow stronger as November approaches, even in the event – especially in the event – that Trump holds his ground. It is based on the coincidence of the two most striking features that characterize the election so far: the treacherous mishandling of the primaries by Democratic Party leadership, and a Republican nominee who may be loathed by Democrats but whose successful bid for the presidency could actually ruin the GOP. The gradual alignment of these two facts in the minds of unhappy progressives, the slow awakening of the Bernie-or-Bust crowd to the card that has magically appeared in their hands – this is what we should all be keeping our eye on.

First, a bird’s-eye-view of the situation. How did we get here? The Democratic Party made its first decisive steps down this path in 1994 when Bill Clinton’s campaign manager Dick Morris convinced him to abandon the old-fashioned idea that a platform is a tool for forging a mandate among the electorate, and to think of it instead as just another PR tool with no bearing on policy once an election is won. This way of thinking about political power –famously criticized by poet Adrienne Rich in her open letter to the NEA – has made its way into the workaday politics of both parties as they become more and more dependent on corporate money. Logically speaking, it had to. Once you split your allegiance between your constituents and the finance industry (and other moneyed interests) PR is the only realistic way to maintain the illusion that you have everybody’s interests covered.

With Bankruptcy Reform, the Bailout, Citizens United, and other legislation designed to protect corporate interests at the expense of low-income families, unions, and just ordinary Americans, the Democratic Party has shown us over and over (and over) just how willing it is to overlook the needs of the very people who vote them into office. This is why Bush found Democrats so ready to take us to war in Iraq, and why healthcare reform – for all the reasons we might hail it as a step forward – looks so disappointingly like corporate welfare. And it is why Hillary Clinton’s image as a cautious realist and incremental progressive, for anyone who believes in one-person-one-vote, comes across as the tiresome but predictable spin of a politician who has spent her entire career deferring to the interests and needs of the corporate money that keeps her and other New Democrats in power.

And now the 2016 primaries. A recently leaked memo shows that Democratic Party leadership not only nominated HRC in advance of the primary process, but that they found it necessary to “muddy the waters around ethics, transparency, and campaign finance attacks on HRC.” Coordinating directly with Correct the Record, a Super PAC run by lifelong Clinton associate David Brock, the HRC campaign paid a total of $1 million to users of Reddit and Facebook to post comments smearing Sanders’s supporters – half of whom are women – as members of a sexist fringe. Add to this the mysterious de-registering of Sanders supporters in New York and California, and exit-poll anomalies showing a statistical advantage for Clinton on machines that flunk hackability tests. It’s enough to make you think this election was just too important to leave in the hands of the voters.

Of course, it is useless to complain about rigged primaries. The rules that govern primary elections were not meant to be democratic or fair. But then, by the same token, it is even more useless to talk about unifying Democrats behind a party that can’t be troubled to do the work of representing them. Perhaps they believed our credulity was boundless. Perhaps they just got careless. But for anybody who remembers the 2+2=5 political culture of the George W. Bush years, it is hard to imagine how America will survive another administration this intent on manufacturing our consent – and this at a time when the symptoms of a party whose only ambition is to win the next election are beginning to look like the full-blown crisis of a party that has no identity or long term goals. The Democratic Party had its chance to unify us, to discover in good faith where the soul of the party sits – and the right candidate to speak for it. That is what free and fair elections are for. And they blew it.

Traditionally, general elections are a time for Democratic leadership to pull one more card from their hand, the Great Republican Menace, and wave it in their constituents’ faces. This time it’s a doozy – something better than all the public relations that corporate money can buy. Of course, it is a card that can only be played as long as Trump stays up in the polls (which, at least while I write this, does not look like very long). But let’s say for argument’s sake that he stays more or less even with Clinton and that the Democratic Party goes on playing it. Wouldn’t it be a good idea to take a closer look at that card while we have a chance? Isn’t it time to have a good hard think about who’s holding it?

The first scenario to consider is the one so troubling to the “vote blue because I’m wetting myself” crowd. In this scenario, a strong bid by the Green Party’s Jill Stein splits the left vote, spoiling the election and handing a win to Trump. Trump! A candidate that is such an unholy mess of a human being even his own party won’t have him. It isn’t just because he has taken a shotgun approach to the issues conservatives care about, or that he is already desperately bored with politics. Sure, I know – John Oliver, Elizabeth Warren and all the extraordinary anti-Trump posts in your Facebook feed can’t be wrong. But we are still missing the point. For all his bigotry, his shallowness, his laissez-faire relationship with his own mouth, Trump is exactly what we should expect when the money that finances American politics no longer needs go-betweens like the Bushes or Clintons to do its bidding and begins speaking in its own power-drunk voice. Trump is the embarrassing truth about American government that “incremental politics” is trying to hide: elected officials have sold away so much of our government to their corporate handlers that their handlers have gotten too big to control. And we voters have allowed this to happen by voting out of fear, rather than giving our mandate to politicians who are actually in a position to represent our interests and needs.

This alone should give us plenty of reasons to take a chance on Jill Stein in November. There is nothing to lose in a Trump presidency that we will not lose sooner or later voting for New Democrats – they are two sides of the same problem. There is, conversely, everything to gain by breaking the two-party stranglehold that is making it so easy for both parties to manipulate and ignore us. With a strong bid for Jill Stein, and with Gary Johnson cleaning up among unhappy conservatives, the spoiler argument is going to become messy at best (who is spoiling it for whom?). The more likely narrative will be a tale of hubris on the part of Democratic leadership, who could not see, for all their Bernaysian shrewdness, that they had finally created a political climate on the left in which it no longer made any sense to vote for them. That this tale of hubris will be told in the context of a win for Trump, the Human Canker, only makes it more damning for Democrats. And this is precisely what the Democratic Party needs.

If you’re still wringing your hands over the thought of a Trump presidency, God bless you, you’re not alone. Republicans are wringing their hands right there with you. In fact, the conservative movement, politically speaking, has a lot more to lose by a Trump presidency than anyone else – a four-year advertisement against the GOP that it may never recover from. Which means that for all the many things unhappy progressives can imagine losing when they defect from the Democratic Party in 2016 (the sooner the better), they have plenty more to gain by voting Green. And this, as I see it, is where the Democrats’ smug handling of the Trump card suffers from the greatest lack of foresight. The simple fact is, they’re not holding it.

There are many other scenarios to consider: a win for HRC and a strong showing for Jill Stein, for example. This is the one on the minds of anybody who considers third-party politics to be a pure function of the protest vote.

But why vote for Jill Stein as a vehicle for your discontent, or even as a stand-in for Bernie Sanders, when you can vote for her on her own merits? They are extraordinary.

Peter Gaffney is a professor of philosophy, visual culture, and the public sphere at University of Pennsylvania and the Curtis Institute of Music, and also editor and co-author of “The Force of the Virtual: Deleuze, Science and Philosophy (2010, University of Minnesota Press)