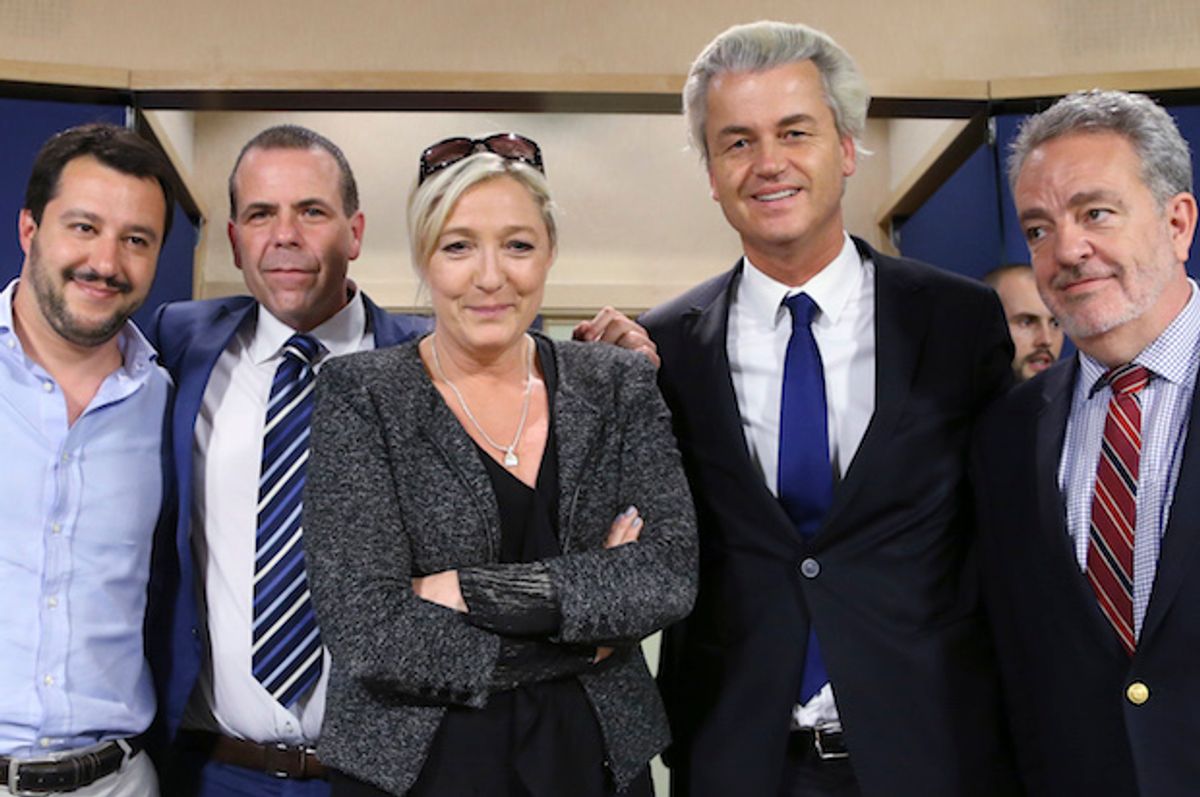 The European far-right just got a big shot of adrenaline.

The U.K. voted on Thursday to leave the European Union. The so-called Brexit vote was applauded by far-right parties and movements throughout the continent.

Immediately after the vote, nationalist, racist, anti-immigrant leaders in France, the Netherlands, Denmark, Sweden, Germany and more called for exit referendums in their own countries.

Far-right parties are claiming victory, and are using Britain's example to recruit. These reactionary nationalist movements, which have been gaining strength in recent years, argue that the unexpected widespread support for leaving shows how the dominant center-right and center-left parties in Europe, which called on their members to vote for staying in the E.U., are out of touch with the people.

Instead of blaming the neoliberal economic policies and harsh austerity measures that have made the lives of working people throughout the continent worse, however, these right-wing nationalist parties scapegoat immigration and E.U. regulations as the supposed source of citizens' increasing hardship.

Greece's neo-Nazi Golden Dawn party, one of the most extreme movements in Europe, applauded "the brave decision of the British people."

“A direct consequence of Brexit will be the empowerment of patriotic and nationalist forces across Europe,” said a spokesperson for Golden Dawn, which admires Adolf Hitler and uses a modified swastika on its flag.

"As I have been asking for years, now we should have the same referendum in France and E.U. countries," she tweeted.

The National Front promptly created a petition calling for a referendum for France to leave the E.U. — what some are calling a "Frexit."

The far-right party is using the slogan, "And now France!"

In a speech at the National Front headquarters outside Paris, Le Pen declared, “The U.K. has begun a movement that can’t be stopped,” The Guardian reported.

Le Pen has pledged to hold a Frexit referendum if she is elected president in the 2017 election.

Geert Wilders, the leader of the Netherlands' far-right Party for Freedom, congratulated Britain and Nigel Farage, the head of the far-right U.K. Independence Party, which helped lead the Brexit campaign.

"Hurrah for the British! Now it is our turn. Time for a Dutch referendum! #ByeByeEU," he tweeted.

Wilders called for a referendum for the Netherlands to leave the E.U. as well — a "Nexit." Like Le Pen, he pledged to hold a vote if he is elected prime minister in 2017.

"The Dutch would like to be in charge again of their own budget, their national borders and their immigration policy," Wilders said.

The far-right leader said exiting the E.U. would allow countries to stop "the Islamization of Europe, immigration, the threat of Islamic terrorism that we see growing, the emergence of asylum seekers," Reuters reported.

In Denmark, the far-right Danish People's Party similarly called for its own referendum.

A spokesperson for the anti-immigrant party congratulated Britons for their "brave" and "correct choice."

Neighboring Sweden saw the same. Jimme Akesson, leader of the far-right Sweden Democrats, vowed to "increase our pressure on the government" to have a "Swexit" referendum on E.U. membership.

"Now it's our turn," he tweeted, accompanied by photos of Salvini with other far-right European leaders, including Le Pen, Wilders and more.

Belgium's Flemish nationalist party Vlaams Belang was ecstatic about Brexit. At a meeting of far-right anti-E.U. politicians before the vote, member Gerolf Annemans excitedly predicted that it "would be the start of a process that cannot be turned back anymore."

Frauke Petry, the leader of the anti-immigrant party, insisted that "the time is ripe for a new Europe."