Todd Solondz's comedy of despair: "I am always trying to navigate a line that is not too far, and not too soft" 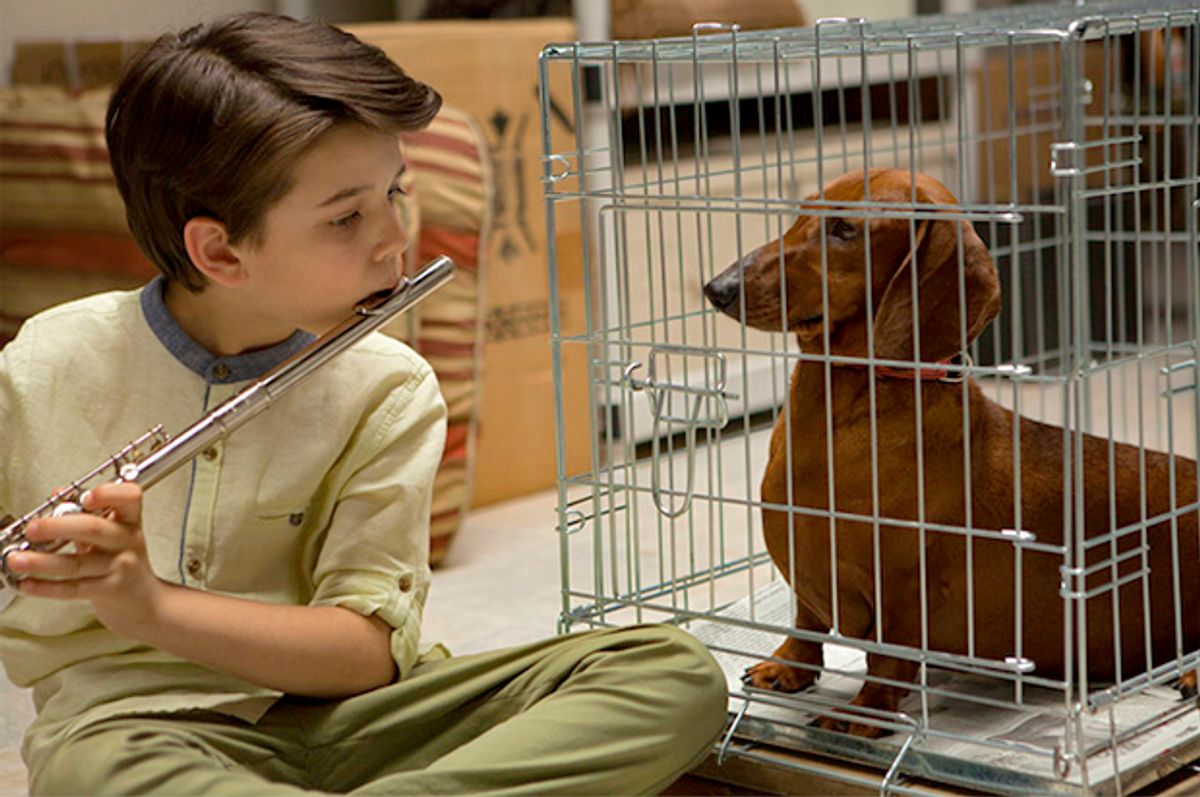 For more than two decades, writer/director Todd Solondz has been making audiences squirm with films designed to be discomfiting. His latest pitch-black comedy, “Wiener-Dog,” traces a dachshund as it is cared for by various characters including: Remi (Keaton Nigel Cook), a young cancer-riddled boy; Dawn Wiener (Greta Gerwig), an adult version of his “Welcome to the Dollhouse” protagonist; Dave Schmerz (Danny DeVito), a fading screenwriter/professor; and a cantankerous grandmother with a soft side (Ellen Burstyn).

As one might expect from Solondz, the screenplay is full of darkly funny dialogue, most notably when Remi’s mother, Dina (Julie Delpy) tells her son a blackly comic tale about the suffering of her own childhood pet, Croissant. But Solondz also addresses serious questions about death, the meaning of life, as well as love and family as the various characters try to combat their despair with the aid of the wiener dog.

The filmmaker met with Salon to talk about his new film.

Do you currently own any pets?

I don’t own any pets. I haven’t as an adult. It’s too much responsibility. It really is a commitment. When I was a child, we didn’t have to pick up after them. Now, that’s what it seems people have to do.

What pets did you have as a child?

Our family went through a lot of pets. None of them survived very long [because] we were a feisty family—at least the children were.

Why did you select a wiener dog as a device to link the four episodes in your film? What was it about the dog that made it the perfect vessel?

Obviously, it came from the idea of Dawn. [She was nicknamed “Wiener-Dog” in “Welcome to the Dollhouse”] I knew I wanted to do a dog movie. I thought of “Au Hasard Balthazar,” which is not a dog movie, on one end of the spectrum, and “Benji” on the other end. I wanted to be on that spectrum. When I thought of the wiener dog, it clicked. Not just because of the connection to Dawn, but it is, I think, seen as one of the cutest possible little pets.

Your films walk a fine line between celebrating and satirizing their characters. How do you construct your characters and make them both authentic/realistic, but also funny and pathetic?

I like that you used the word "construct," but I don’t really think in those terms. I think about what moves me, and what makes me laugh, what provokes, what excites me. It’s an ambivalence that I feel towards my characters or a situation. On the one hand, there may be some cruelty, but there is also some tenderness. There may be some comedy, but there is also a kind of pathos. There’s a friction that those juxtapositions ignite that excites me and from which all of this evolves. It starts there on the page.

You tend to write dialogue with acid. I’ll never forget Ellen Barkin’s character in “Palindromes” saying her abortion was “the happiest day of her life.” In “Wiener-Dog,” Dina (Julie Delpy) tells her son Remi an imaginative story about her childhood poodle, Croissant, being raped. Both AIDS and cancer are used as punchlines in the film. How do you determine how far to push things? Do you not have a filter?

I do filter myself! I’m always pulling punches! I am always trying to navigate a line that is not too far, and not too soft. Life is always much too cruel. All you have to do is read the paper any day of the week. It’s much more horrific than anything I’ve put out there. I am always softening to it try to make it acceptable to my audience. I want to subvert expectations; to be provoking in a way that I like to be provoked when I go to the movies—which is to experience the world anew, afresh in some way. That you see something articulated that maybe even you yourself have not articulated amongst your friends and intimates. That’s what I seek out in movies, and what I try to provide. Certainly, in the [Croissant] scene with Julie Delpy, I have one little element in that speech that did scare me a little, but I feel like I can count on my under-the-radar-ness.

While this film has not yet sparked censorship issues, you have had trouble with the censors before, notably with your film “Storytelling.” Do you think about how people will respond to your edgy style?

I call this a comedy of despair. It’s not in fact about a dog, even though I used the dog as a kind of conceit. It’s about mortality, and how that hovers and shadows each of these stories and characters. I have to be true to that. Dogs are very often a vessel for projections. They are innocent of some things, but innocence only makes sense within a context. They have their own dog-ness, with their own yearnings, needs and desires. And that is often hard to penetrate when they are functioning as a repository for the owner’s needs and issues.

I think it would have subverted expectations if I’d come out and done some really fluffy movie, but it doesn’t interest me. Why death? It’s a subject. I am a filmmaker, and this is where I am. I think about these things. Over the course of writing this, that’s what came out. I saw that [death] was what this film was about.

You have had multiple actors play the same role, such as in “Palindromes,” or have multiple stories within one film, as in “Wiener-Dog.” Why do you play with narrative in these ways?

I love the idea—unlike real life, where we have but one life—that in movies and in fiction, you can create characters who have other lives. And you can create “other lives;” in other words, I can give you one movie where Dawn dies, and another where she has a very hopeful, romantic possibility. I can have a character played by the same actor, or by different actors. The idea of different possible trajectories is something we all think about.

It’s the “What if?” questions that Danny DeVito’s character repeats!

There’s that, and the climax with Ellen Burstyn’s character looking at the many possibilities of lives not led. So this is something that is very human. Every decision we make is a decision to do something other than what we could have done. It’s human nature. It’s our lives. This is something I can play with for different effects.

Do you think you will continue to feature Dawn Wiener in your future films? Are you working something out with her character?

I don’t have any grand plan. I don’t. I didn’t know that I would bring her back. Heather [Matarazzo, who played Dawn in “Welcome to the Dollhouse”] kind of freed me when she told me years ago—because I’d written yet another movie with the character—that she didn’t want to be an “Antoine Doinel” [the protagonist in a series of Truffaut’s early films]. She didn’t want to reprise the character. And that freed me up and made me want to push this freedom even further.