Litchfield's devastating loss: Why this shocking “Orange Is the New Black” death was the right choice

In bringing Black Lives Matter into our homes, “Orange Is the New Black” had to show us why the movement exists 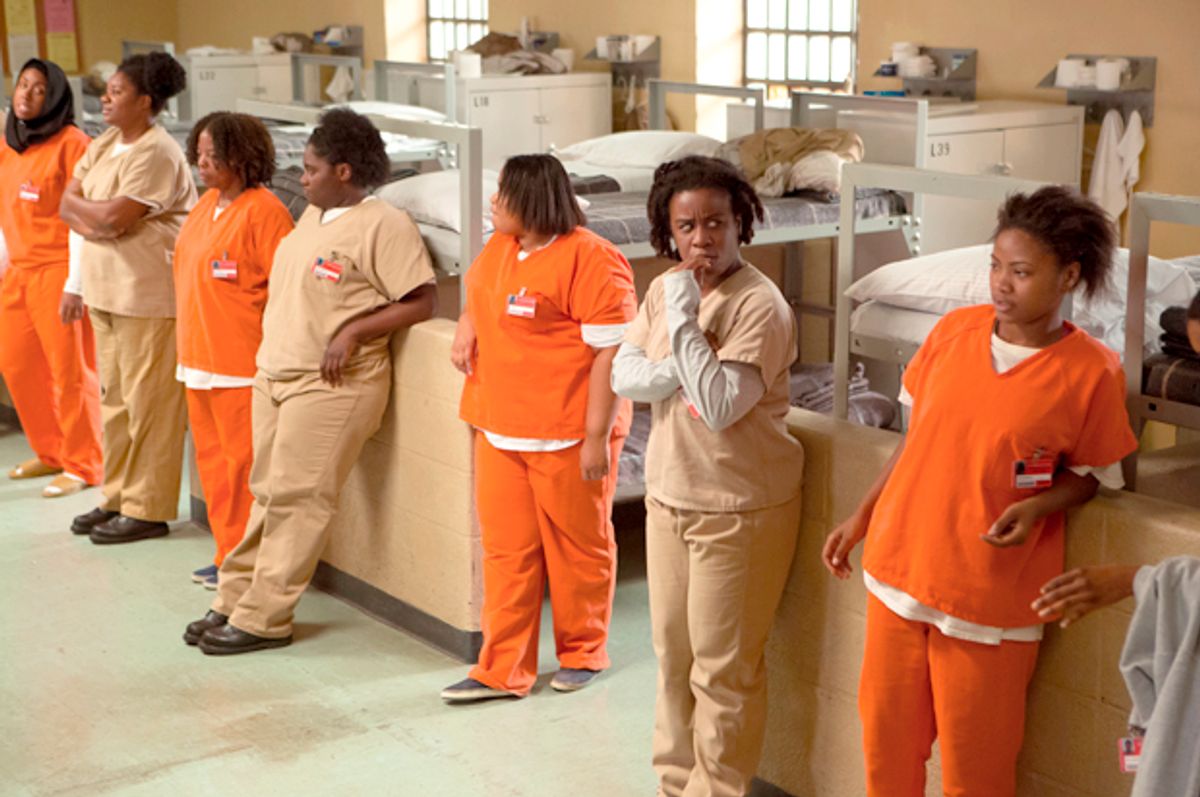 Warning: Spoilers ahead for a major plot point late in season 4 of "Orange Is the New Black."

Coincidental prescience repeatedly occurs throughout television, particularly on series informed by current events. Sometimes these serendipitous bridges between art and life highlight a level of deep insight in a show’s writer’s room; sometimes, the fact that real-life events happen to play out in fictionalized form on TV simply speaks to the natural progression of our times.

In any event, it’s amazing to think that three days after the fourth season of “Orange Is the New Black” kicked off, the Supreme Court delivered its decision in Utah v. Strieff, making it legal to detain a person without cause and then, should that person have an outstanding warrant and be found with incriminating evidence, allowing the results of that search to be admissible in court.

Erosive to the Fourth Amendment, the ruling sets a worrisome precedent that impacts every free citizen and stands to disproportionately target minorities and the poor. Meanwhile on “Orange Is the New Black,” “stop and frisk” -- the very practice at the center of Utah v. Strieff -- plays a central role in the new order at Litchfield. At these allegedly random stops, the white girls can keep on walking, contraband and all, while the black and Hispanic inmates must line up and submit themselves to intrusive pawing by the guards, the newest of which are ex-military and view the women as adversaries.

Series creator Jenji Kohan and “Orange’s” writers conceptualized these plotlines months ago, and certainly couldn’t have known that using “stop and frisk” as a story device would fly in the face of what the majority opinion stated, that there’s no indication that the case examined in Utah v. Strieff was part of “any systemic or recurrent police misconduct.”

No aspect of life in Litchfield occurs in a vacuum, and this is doubly true in the current season. Written with the specific goal of exploring privilege and social justice movements such as Black Lives Matter, there’s no way “Orange” could believably do that without showing how law enforcement inordinately targets minorities.

But there’s prescience in TV writers’ rooms, and there’s just unfortunate timing. In the case of the fourth season’s big death, “Orange Is the New Black’s” creative staff obviously had no idea that in building toward that climactic horror, they were walking into another protest movement inspired by a terrible TV trope, Bury Your Gays, that reared its head too many times during the 2015-2016 season.

(In case you breezed by the spoiler warning at the top of this piece, the piece addresses a major one from this point on. If you’re still reading and haven’t finished the current season of “Orange Is the New Black,” stop now or forever hold your peace.)

In committing to bringing Black Lives Matter into our hands and homes, “Orange Is the New Black” was obligated to show us the reasons said movement exists. Given that the ignition of that movement were the deaths of African Americans at the hands of law enforcement, including Eric Garner, Sandra Bland and Michael Brown, that meant someone with whom fans had a deep emotional connection, had to die.

Turns out the bell tolled for Poussey (Samira Wiley), one of the show’s most lovable, life-affirming characters and a lesbian who was out and proud. Poussey joins the shockingly long list of gay females who died during this season of television. According to a widely circulated piece published on Vox.com, it is estimated that LGBTQ women account for some 10 percent of this season’s TV character deaths.

Autostraddle.com maintains a growing tally of lesbian and bisexual characters TV deaths, and also indicates how each character died. Poussey’s passing has already been logged, without explicitly naming her at press time.

Her death has inspired an outcry on Twitter and its own hashtag, #PousseyDeservedBetter, and though Wiley herself has addressed the character’s death and the reasons for it in several publications, (her girlfriend, Lauren Morelli, wrote the episode, which was directed by “Mad Men’s” Matthew Weiner) that’s still not enough to placate some viewers.

Poussey was not killed off by a stray bullet, didn’t die by suicide, or take a crossbow bolt through the eye. But the nature of her death, and the fact that she was the one who died, makes her exit from the show different from other deaths. In fact, unpopular though this idea may be, I’d even go so far as to call it as good a TV death as one could be.

By good, I don’t mean that what happened to Poussey is fair or that she deserved it. But if “Orange Is the New Black” had to give its movement a martyr, Poussey was the obvious choice. Not only was she a clear fan favorite, she also was some version of a so-called “model minority”; she defied uninformed assumptions about what type of women end up in prison.

Kohan reportedly chose Poussey not only because she was beloved but, according to Morelli, because her character had a shot at a good future on the outside of prison. This is one of the cardinal rules of writing tragedy: go for the pain, and make the audience feel it. Poussey was just a good girl who got lost, and died in the crush of injustice.

Poussey was highly educated and worldly, the child of an Army officer and a mother who held a master’s degree and who could barely stomach taking an aspirin. She was also around 90 pounds, and had been the victim of violence in a past season, when “Crazy Eyes” (Uzo Aduba) beat her up on orders from season two’s main antagonist, Vee (Lorraine Toussaint). In a show initially built around a character referred to as a Trojan Horse, Poussey was the real secret weapon.

All of which is to say, Poussey in no way posed a threat to anyone, least of all the guard who crushed the breath out of her, Baxter Bayley (Alan Aisenberg). The tragedy occurred when the new captain, Desi Piscatella (Brad William Henke) attempted to break up a peaceful protest, organized in the spur of the moment to demand his resignation. Piscatella responded by ordering his team to physically remove the inmates from the cafeteria, which sparked a panic attack in Crazy Eyes.

When a guard starts to manhandle her, Poussey steps in, trying to defuse the situation and calm her friend down, leading Bayley to toss Poussey to the ground and put his knee on her back to keep her down. In the ensuing frenzy, Crazy Eyes attacks Bayley, who is so focused on fending her off that he fails to notice Poussey is suffocating under his weight.

The pity of this situation is that both the perpetrator and the victim are among Litchfield’s most vulnerable. There are many cruel men among the prison’s guards. Bayley, a wide-eyed, easily manipulated youngster, was not one of them.

When the representatives of the prison’s new management, MCC, swoop in to do damage control, the first thing they do is attempt to vilify the victim. But nothing in Poussey’s file or public profile jibes with the story they want to tell, which would paint her as a violent aggressor. So they pivot to make Bayley into the scapegoat. The entire time that this was happening, Poussey’s body remained on the cafeteria floor, right where she fell, for hours – echoing what happened to Brown in Ferguson, MO.

Capping off that indignity, Caputo (Nick Sandow) makes an honest, heartfelt attempt to explain what happened in a media statement, without permanently staining Bayley’s reputation. But in doing so, he neglected to mention Poussey by name, angering her friends and setting off a prison riot.

Grief for the loss of a favorite TV character can feel especially bitter when said character’s death amounts to a cheap exit. But Poussey’s was no flimsy departure. In fact, it’s one the most powerfully depicted demises of recent TV seasons.

Following the cadence of true mourning, the fourth season finale gave us a glimpse of one the best nights of Poussey’s life in flashback -- a transcendent New York City evening when she got separated from her friends. This time, when she got lost, she stumbled on a magical warehouse party filled with love, kisses, dancing and sharing, later hitching a ride with a friendly group of bicycling monks, who weren’t actually monks. In our final glimpse of her she smiles brightly, the city skyline sparkling at her back, a world of possibility reflected in her eyes.

Before the chaos that took Poussey’s life breaks out, Piscatella reminds an inmate that prison wasn’t built on humanity. But sometimes it takes the death of someone we love, in the service of a cause worth fighting for, to remind us of ours.