"Game of Thrones" needs a new big bad: With Ramsay out of the way, a villainous void must be filled

Ramsay Bolton was a terrible villain—but now that he's dead, we need someone new to love to hate 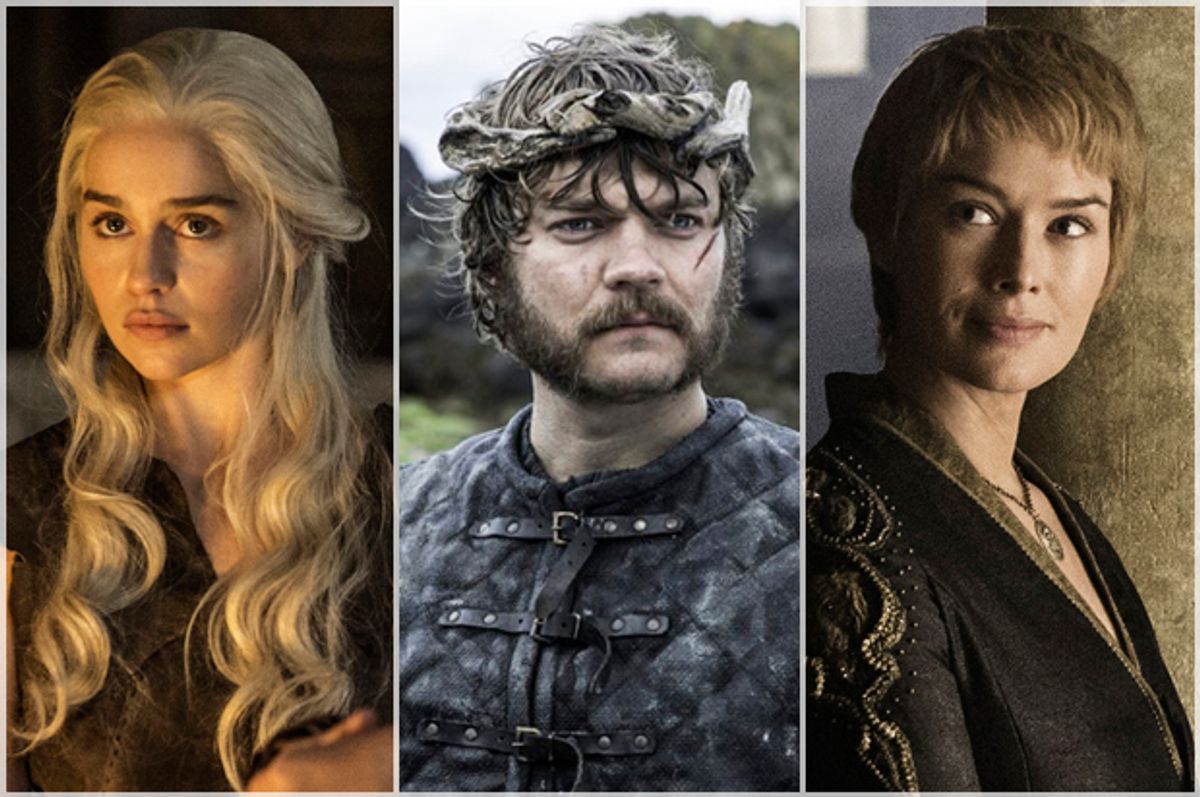 “Your words will disappear. Your house will disappear. Your name will disappear.” Sansa Stark’s final words to Ramsay Bolton, the man who raped and tormented her—spoken before she sics the dogs he has weaponized through cruelty and starvation upon him—are as sharp and penetrating as the fangs cracking through his jaw: All he has wanted (beyond getting his jollies castrating captives and hunting young women), is the legitimacy and power afforded by a house and a name. So Sansa hasn’t just defeated him, she has erased him. And her final f-you is cathartic in a meta way—it speaks to the relief that viewers feel now that Ramsay Bolton will, at long last, disappear from “Game of Thrones.”

As a big bad, Ramsay had become a little bit boring: In the last two seasons, particularly, he was more like the shark from “Jaws” than a fully-realized character—existing as a dark fin cutting through the water, a set of teeth gnashing up from the depths. His story cycles followed the same downward spiral: Through an ultimately uninteresting confluences of superhuman cunning and plot contrivance, Ramsay captured one of our protagonists and tortured them, or he killed and connived to reach some newer echelon of prominence. Lather. Rinse. Repeat. If these scenes had been more selectively deployed, or been perpetrated by a more deftly rendered villain, they would have retained their power to shock us—instead of becoming a cheap pastiche of grotesquerie, like the opening credits to a show called “That’s So Ramsay!”

Sadly, the erstwhile Bolton bastard had potential to be a truly compelling antagonist—if developed further, his desperate need for his father’s approval, and his recognition that even with that approval, his position was always tenuous, ever-threatened by the arrival of a true-born son; his grinding resentment that a man of his intelligence will always be subordinate to the manor-born, could have woven some gray threads into the tar-dark tapestry of his actions. The failures of the writers and showrunners to vest Ramsay with any complexity is particularly curious, given that “Game of Thrones” has excelled at crafting some of the most deeply-shaded antagonists on television. Take Cersei Lannister’s trial by the Faith Militant: Though fans clamored for the Cleganebowl, that epic final battle between the Mountain and the Hound, there seemed to be sparse speculation about who, exactly, we wanted to win in that trial by combat—since the Mountain would be Cersei’s champion and the Hound would be fighting for the Faith. This ambivalence can be attributed, of course, to the mutual awfulness of Cersei and the High Sparrow—and yet, there are also legitimately compelling reasons to root for each one to emerge victorious.

The High Sparrow is a religious bigot who cloaks his lust for power in a dirty sack cloth; though he talks a good game about equality among the social classes, he holes up in the fortified Sept of Baelor, and for a man who claims to have no need for earthly vestments, he’s sure interested in cozying up to the crown—even to the point that he creepily insinuates that Queen Margaery better to get to that baby makin’. Still, that doesn’t mean that all of his rhetoric is inherently wrong: The ruling elites are truly incompetent and corrupt, and they deserve to be supplanted. Daenerys Targaryen talked of “breaking the wheel” upon which the world of Westeros spun—the same families taking turns as victors and victims, and taking the smallfolk down with them—but the High Sparrow has actually snapped the spokes along his knee. Even Olenna Tyrell, the Queen of Thorns, admits as much when she curses Cersei for causing the ruin of both their houses.

Cersei’s current predicament is a natural consequence of her own actions—after all, she tried to turn the Faith Militant into her own pack of attack dogs, turning them on her son’s new bride, a younger queen, before they reared around to bite her in turn (and there is a bitter irony in Cersei’s son, King Tommen, repeating, in earnest, the same lines about the crown and the faith that she first fed the High Sparrow). And if Cersei’s subsequent imprisonment, walk of shame, and impending trial don’t feel exactly like justice, then her punishments are, at least, the backhand of karma leaving a mark—for giving power to zealots to satisfy a petty grievance, for raising Joffrey to be, well, Joffrey, and for orchestrating the murder of her husband the king (kinslaying and kingslaying, with one drop of poison), tipping the dominoes of horror and war throughout the seven kingdoms. Still, as her brother-lover Jaime points out, the nature of her “penance” is absolutely gendered—he’s guilty of many of the same charges (especially king-slaying and incest), and yet he hasn’t been paraded naked through the streets, his flesh the receptacle of the commoners’ rage.

In this way, Cersei’s blood feud with the High Sparrow is a simulacra of her story as a whole: Her woes originate from her own undercooked schemes, and are compounded by the violent sexism of her times (which reflects the violent sexism of our times). We cheer Sansa Stark’s Straight Outta “I Spit on Your Grave” revenge on Ramsay Bolton, but Robert Baratheon also beat and raped his wife. By this logic, in its coldest, most basic form, can we really begrudge Cersei her own vengeance? Yes, her methods may be sloppy and short-sighted—if she hadn’t chosen violence (however good it felt), and simply met the High Sparrow at the sept, then she’d still have trial-by-combat to save her skin—then again, she never received proper tutelage in the finer arts of trickery. Her father, Tywin Lannister, was a master strategist; however, he wouldn’t deign to mentor a girl, even his own daughter. Sansa may have been sold into marriage by Petyr “Littlefinger” Baelish, but he still managed to teach her a thing or two before she went head-first into the fray.

This season, Tywin’s ignoble death is fodder for (literal) potty humor during a Braavosi play—and the crowd-pleasing howler about Tywin Lannister shitting gold            is a wry inversion of his former infamy as the architect of the Red Wedding and, before it, the man for whom “The Rains of Castamere” was written. Though his legend within Westeros is now distilled into the singular image of the most powerful man in the realm (because everyone knew that he was more than the Hand of the King, but the hand that held the nation) dying on a toilet, spurting something that was decidedly not gold as he breathed his last, his absence has created a real void on the show. It’s a fitting punishment for all eternity, perhaps; it doesn’t dilute the truth that Tywin was the rare antagonist with charisma to match his ruthlessness, and an immaculate, almost delicate sense of cruelty. But there’s also a robust pragmatism to that cruelty; he orchestrated the Red Wedding to humiliate his foes, and to, in a perverse way, save lives.   “Explain to me why it is more noble to kill 10,000 men in battle than a dozen at dinner,” he quips to his son, Tyrion.

This chess player’s pragmatism is lacking in Littlefinger, (at least in the past two seasons; his endgame in giving Sansa to the Boltons remains too inscrutable to seem like anything other than the gears of plot grinding insensibly into motion), and certainly in Ramsay, who the showrunners wanted to position as another all-pervasive baddie. But Ramsay’s characterization was wildly discordant—he swung from being a random sicko who’d use blunt physical torture to achieve his ends to a brilliant tactician and manipulator whenever it was convenient. Tywin and Cersei and even, in his way, the High Sparrow are realized, and lived-in, enough, to be consistent in their actions and reactions; this consistency breeds familiarity, and even if that familiarity breeds contempt, it still makes them human. And being human—not an automaton of terror—makes them all the more compelling (and frightening).

Temperamentally, Ramsay is closest to Joffrey (I imagine they’d have a lot to talk about, wandering through the seven Hells), although Joffrey was a more watchable villain because his brattish ineptitude coaxed out the very best in the characters around him. That brilliant and oh-so-versatile GIF of Tyrion slapping him comes to mind; however, Joffrey also provided a showcase for the resourcefulness (and delightful deviousness) of the Tyrell women. One could even argue that his unrepentant awfulness gave Cersei a platform to demonstrate her maternal ferocity—she would be devoted, to the death, to the vilest of sons.

Ramsay didn’t inspire anything except fear and dread—and, in the viewer, boredom. As he is humbled before Sansa, bloodied and bound, he tries to get his last licks in, tells her that he is part of her now. That may be true for her (whether you’re a literalist who takes this as a sign that Sansa is pregnant, or believe it to be a metaphoric expression of how she’ll always live with all that he’s done to her), but I highly doubt it’s true for the show. If Tywin’s death created a void, then Ramsay’s is an open field, ready for planting—and the seeds of finer menaces are already available. Cersei’s trial should tender some resolution to her conflict with the High Sparrow, and the aftermath will be compelling. Euron Greyjoy does promise a bawdy swag that, in small doses, could be fun to watch.

Although, perhaps the most tantalizing antagonist-in-waiting is the dragon queen who believes, unquestioningly, in her fundamental rightness—even if proving that rightness means deploying a nuclear blast of dragon-flame upon cities full of innocent people. If the show does go this route—and the numerous references to the character who has been the paterfamilias of Big Bads, Daenerys’ father, Mad King, Aerys, seem to suggest that it will at least flirt with the idea of the breaker of chains breaking bad—it will be one of the most daring, provocative feats of the series. After all, as Harvey “Two Face” Dent, another all-time classic villain (albeit from another universe) once warned us, there’s nothing worse than living to see yourself as the villain.